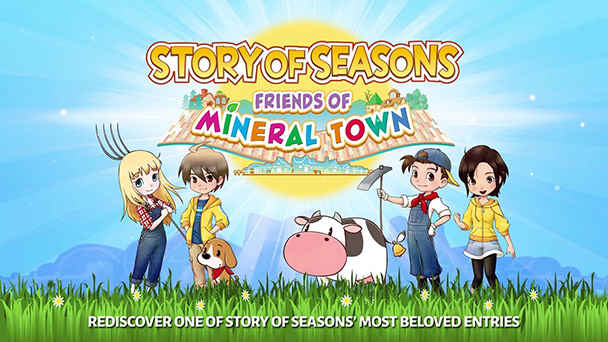 Games don’t have to center around unremitting tension, Story of Seasons: Friends of Mineral Town reminds us. A perfect companion piece to Animal Crossing: New Horizons, Mineral Town’s agricultural affairs are wonderfully tranquil and have few punitive mechanics. If you’re looking for a game that fosters a sense of serenity, this adept remake should be on your wish-list.

Whether it’s multiplayer matches filled with players who have perfected their skillset during the pandemic, or dystopian plotlines teeming with bloodshed, contemporary gaming can often be a bit stressful. Luckily, there are games like Story of Seasons: Friends of Mineral Town that dispense feelings of relaxation, as they transport players to a town filled with friendly folk.

Delve into the remake of the 2003 Game Boy Advance title, and you’ll travel to one of the series’ prototypical pastoral communities. If you played any of the games published by Natsume, you might be familiar with the Harvest Moon moniker. More recent converts might associate the franchise with the Story of Seasons name. Either way, they are both localized versions of Bokujō Monogatari (literally “Ranch Story”), as series started with the release of Yasuhiro Wada’s 1996 SNES game. 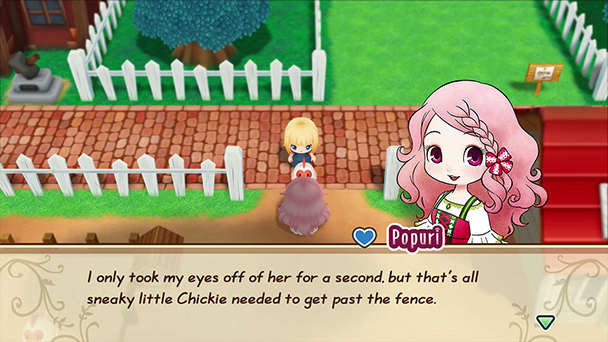 Nurturing a Sense of Discovery

Over the last decade or so, the games often begin with a lengthy preface, where players are fresh arrivals from a modern municipality. As city slickers, it’s assumed unacquainted with the duties of agrarian life. That follows are a long succession of lessons about preparing the soil, planting seeds, regular watering, and selling you’re crops to earn a cornucopia of cash.

Mercifully, Mineral Town adopt an autonomous stance. After selecting from one of four playable characters (two male and two female), naming your farm, and selecting from two difficulties levels, you’ll largely be left to your own devices to reinvigorate your grandfather’s farm. 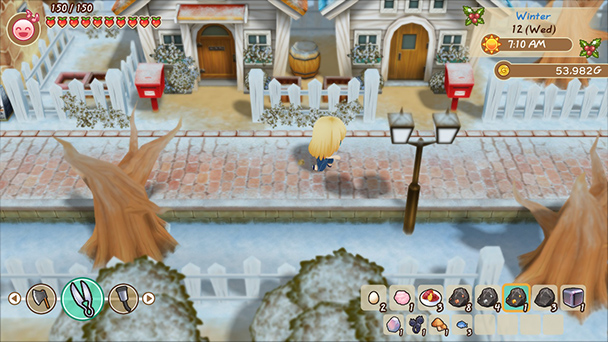 Sure, you can opt to look up a FAQ what will tell you exactly how to maximize efficiency. It’s your game after all. But I’d highly encourage resisting the urge to seek any kind of outside help. Much of the enjoyment of any Harvest Moon/Story of Seasons game is the sense of discovery. I’m going to be deliberately ambiguous here: discerning the best habits for crops, getting insights into the tomorrow’s weather, and even the how much each harvest is worth is part of the fun. There’s also plenty of restrained in-game assistance if you look around town.

The other remarkable trait with the series, is the multitude of pursuits. If you want to obtain the very best farming equipment to make your life easier, there’s a clear-cut route you should take. If your ambitions are just amassing as much wealth as possible as building an estate, Mineral Town won’t chastise your aspirations. If you’re more interested in pursuing amorous connections, that’s also an option. But mirroring real life, you can’t have romance without first securing enough finance to court your partner. The Western version of Mineral Town allows for same-sex marriages as well, reframing the awkward ‘best friend’ mechanic of the original game. 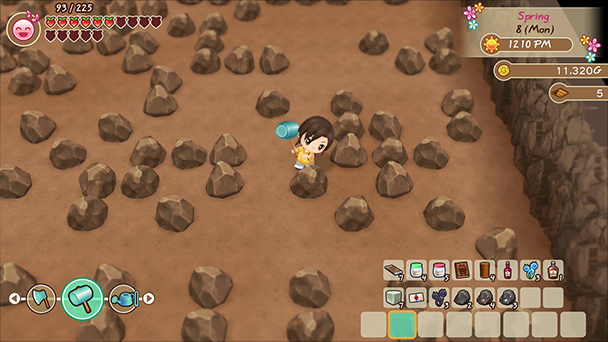 Prudently, this remake of Mineral Town doesn’t introduce unnecessary changes and strives to preserve the spirit of the original version as much as possible. That said, the biggest change is a shift from the sprite-based characters to polygonal ones. But largely, Marvelous’ conversion is adept. Although the game might not be quite as attractive as New Horizons, it’s a close second. From the blossoming sakura tress in spring to blankets of snow in winter, Mineral Town does a pleasing job at capturing the spirit of each season. While holidays like the Starry Night Festival and the Fireworks Festival struggle to recreate the splendor or interactivity of actual events, there’s enough proceedings to ensure you’ll always have something to look forward to. Call me crazy, but I always enjoy Mineral’s livestock and pet competitions.

Although conversations with potential romantic partners are a bit too repetitive, Mineral Town’s new translation is welcome. Copy-pasting the dialog from the 2003 game would have disclosed the game’s age. Now, dialog feels a bit more distinctive, with characters have their own speaking style and dialect. But one element that might disappoint players is the redrawn character portraits. These aim to reconstruct the look of the original, the more Westernized character art is rather dissonant. 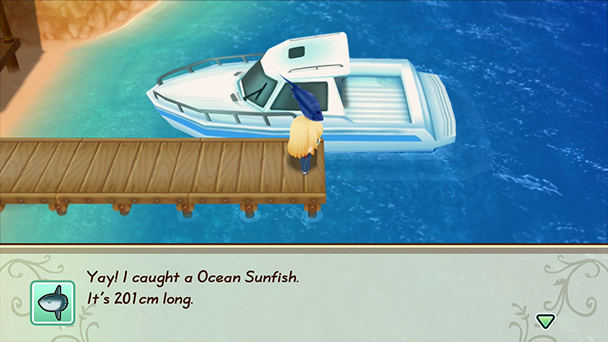 The Mysteries of Love

Other elements that have been carefully preserved is the game’s subtle sense of place and progression. Just like in the original game, characters follow their own idiosyncratic schedules and routines. While a FAQ will divulge their habits, enjoyment comes from learning their routine. While one of the game’s bachelorette’s personalities was a little eccentric, routinely running into her after my daily duties were completed fostered chemistry. In some ways, Mineral Town acts like a romantic litmus test, revealing if we prefer traits like spontaneity or predictability, rather than something as simple as hair color or clothing. Even when relationships aren’t romantic, they’re perpetually rewarding, which seems especially poignant given the events in the real world.

Mineral Town even reaches into the ethereal with the incorporation of seven different spirits. Like townsfolk, you can develop a rapport that’s assisted with requests, gift giving, and mini games. Build enough of a bond and they’ll assist you with your agricultural duties, making any relational investment worthwhile. Although original developers might have been poking fun at Snow White’s aides, their spectral form hints at actual venerated deities, which is rather interesting. 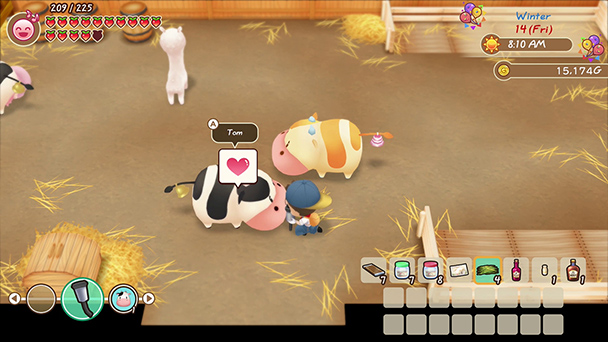 That said, there’s still some balancing issue found in Mineral Town. Although mining provides ore that’s needed to upgrade your tools, save for the occasional reward of gold or gems, the pursuit doesn’t pay as much as it should. Another frustrating mechanic is found with fishing, where you’ll randomly pull garbage out of the water a bit too often. But you’ll probably feel these blemishes are counter-balanced by some welcome additions. A cursor showing exactly where your seeds will go is quite welcome, as the ability to stack items in your rucksack. Another satisfying improvement is finally being able to walk over small obstructions. With the inclusion of two new romanceable characters, crops, animals, and quality-rankings for your harvests, there’s a reason to revisit Mineral Town all these years later.

Game often spur players through punishment; with a ‘game over’ screen being one of the most common chastisements. But Story of Seasons: Friends of Mineral Town has very few punitive traits. You’ll forge your own way though the world, at your own speed, and that feels refreshing, even coming on the heels of New Horizons. If the industry can support a plethora of first-person shooters or annual sports games, certainly there’s room for several comforting agra-sims. Even if you’ve played My Time at Portia, Stardew Valley, and New Horizons, there’s a lot of unique charm found in Friends of Mineral Town. Do yourself a favor and experience the game that inspired them.

Story of Seasons: Friends of Mineral Town review
Games don&rsquo;t have to center around unremitting tension, Story of Seasons: Friends of Mineral Town reminds us. A perfect companion piece to Animal Crossing: New Horizons, Mineral Town&rsquo;s agricultural affairs are wonderfully tranquil and have few punitive mechanics. If you&rsquo;re looking for a game that fosters a sense of serenity, this adept remake should be on your wish-list. Whether it&rsquo;s multiplayer matches filled with players who have perfected&hellip;

Summary : A delightful ode to the joys of agrarian life, Story of Seasons: Friends of Mineral Town still captivates seventeen years later. Marvelous’ remake updates nearly all the antiquated elements, while allowing the mechanics to shine, courtesy of a visual makeover.