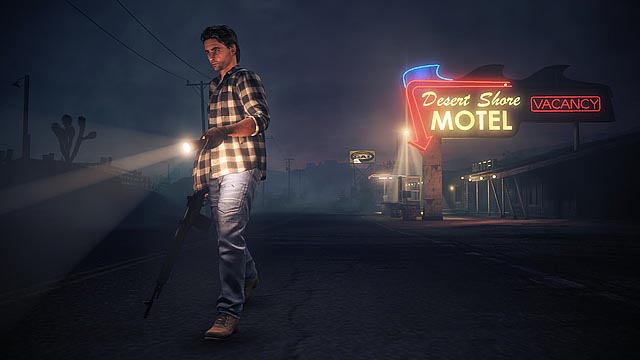 What is the concept? Although 2010’s Alan Wake received praise from critics and consumers alike, initial sales proved to be sluggish. Fortunately, an aggressive price drop and the inclusion of the game (via digital voucher) into holiday console bundles was able to escalate interest, permitting a wide swath of players to experience the title’s taut action and compelling storyline. Although developer Remedy (Death Rally, Max Payne) remains dodgy on the status of a true sequel, the recent release of Alan Wake’s American Nightmare reveals that the Finnish studio isn’t ready to retire their tortured writer.

Whereas the original game was able to cultivate premeditated scares by sending players down a fairly narrow path, American Nightmare’s desert setting delivers a wide-open expanse. As such, many of the unnerving set pieces of Alan Wake have been replaced with visceral action sequences. Proof of this alteration can not only be found in the protagonist’s decidedly gung-ho demeanor, but also in the game’s more dominating arsenal- which now includes items such as carbine rifles, sub-machine guns, and combat shotguns. Likewise, the regeneration speed of flashlight batteries as well as the quantity of ammo has been increased, consequently swapping controller-clinching tension with Taken-terminating jubilation. 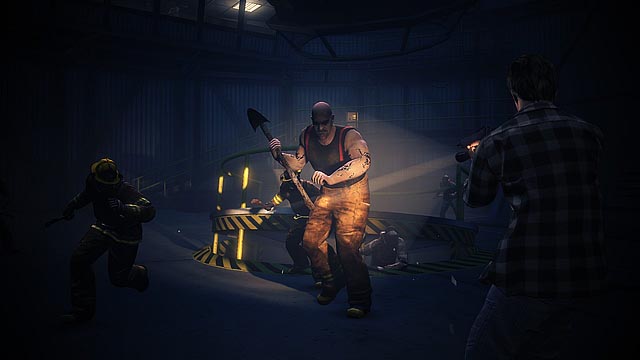 What are the game’s strengths? While tension may have been slackened, it doesn’t mean the title lacks an aura of restrained creepiness. The engine’s lighting system remains top-notch, permitting players to use their flashlight to peer into darkened recesses, with illumination often creating apparition–like elongated shadows. The title’s enemies remain disturbing as ever, as safety-mask wearing firemen lithely hurdle tall fences and approach players with menacing weapons. New foes like the Splitters, who split into two smaller doppelgangers when lit, while another adversary can transform into a murder of crows before reconvening behind you, are equally as imaginative.

Wisely, Alan Wake’s myriad of collectable thermoses, alarm clocks, and game boxes are been pared down. Now, manuscript pages have a dual purpose- providing players with a bit of backstory, as well as serving as the currency used to unlock new weaponry. Firearms collected during the game’s core campaign can also be used in American Nightmare’s Fight Until Dawn mode. Drawing inspiration from Resident Evil’s Mercenaries component, this diversion pits players against waves of increasingly powerful crowds of opponents, as gamers try to maximize their score. Although the unlockable maps and leaderboard support are capable of maintaining a gamer’s interest, the lack of any online multiplayer is a slight setback. 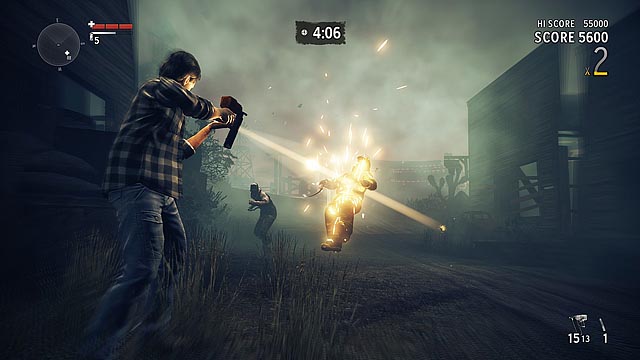 What are the game’s weaknesses? Presumably, to squeeze American Nightmare into digital download size, some concessions had to be made. As such, the title’s storyline involves a bit of thematic repetition, as players return to a trio of main locations, albeit with subtle changes each occurrence. While, Remedy tried to offset this design decision with slight changes to the environment and new enemy encounters (and well as rationalization with the game’s plotline), exploring familiar locations doesn’t convey the same thrill as discovering new ones.

Regretfully, the title’s voice-overs and in-game cinematic sequences are wildly uneven. As solid as the game’s faux-Rod Sterling narrator, full-motion video segments, and Old Gods of Asgard radio bits are, they are undermined by lackluster performances by Nightmare’s NPC. Adding insult to injury are the jerky mannerisms displayed by characters during dialog sequences, which diminish the title’s otherwise capable sense of immersion. Licensed music makes a reappearance in this game, with British neo-psychedelia outfit Kasabian offering a number to complement a key sequence. 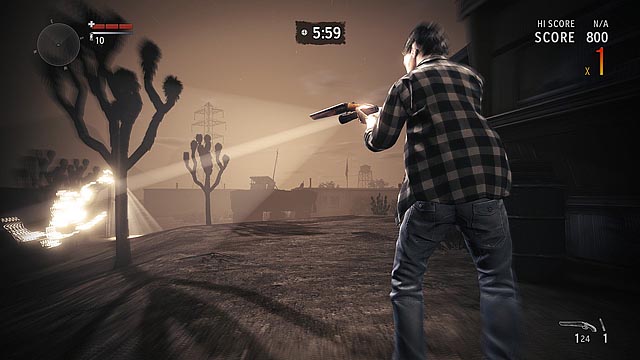 Would I enjoy this game? Fans of the original title may bemoan the shortage of scariness in Alan Wake’s American Nightmare. Yet, players who can look past that atmospheric alteration will find a lot to enjoy with the title. From prudent tweaks, an additional layer of polish applied to the combat system, to the addition of a compelling score-based survival mode, the game channels the vim and vigor of Remedy’s own Max Payne. While the studio might not consider this to be full-fledged sequel, there are enough commendable amendments which allow American Nightmare to create its own district tenor, yet render the game every bit as obligatory at the original game.