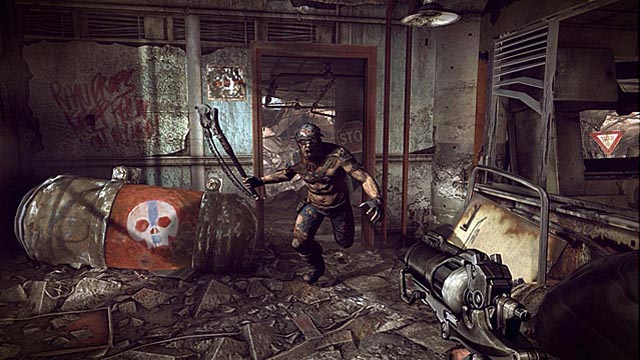 Call of Duty 2’s release amidst the Xbox 360’s launch lineup was a harbinger of hope for first-person shooter purists. Sporting an impressive draw distance and a habitually solid sixty-frame per second output, the title suggested that future entries in the FPS genre might exhibit a similar level of technical performance. With recent triple-A titles such as Halo: Reach, Killzone 3, Resistance 3, and Crysis 2 suffering from uneven refresh rates and even sporadic breaks in the action, PC envy is becoming an emerging epidemic, as the polygon pushing ability of graphic cards are outperforming the capabilities of the 360 and PS3.

Leave it to the wizards at id software to quell any influx of invidia (or perhaps, nvidia). With a development period spanning six years, Carmack and company’s Rage can be a technological feat, delivering a rock-solid, impeccably sinuous framerate and draw distance which easily outperforms its console peers. However, the title’s highest level of performance isn’t without consequence – requiring two DVDs to be installed onto the 360’s hard drive to eradicate any trace of texture pop-in. Once the lengthier read times of the optical drive are circumvented, Rage is pure visual spectacle, flaunting sumptuously rendered vehicles, landscapes and characters. Even the game’s weapons models are drawn with enough duteous detail to earn a centerfold spot in Guns and Ammo. 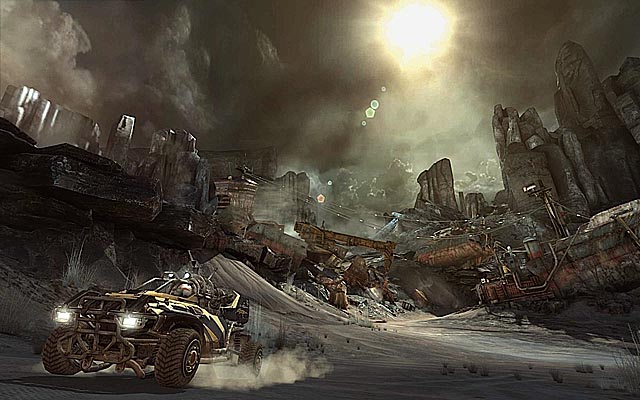 Skillfully, the title’s visual proficiency transcends jaw-dropping vistas and an unshakable refresh rate. Rage’s animations are also top notch- with many foes moving about in pleasingly unpredictable ways. Enemies will scamper along the ground, summersault, and even launch themselves from environmental objects, making combat consistently unsettling. When injured, adversaries react realistically- persistently limping after a leg wound or even contorting their mangled body for one last-ditch attempt on the player’s life. Shrewd AI routines help solidify the intensity of firefights, with opponents reacting quite differently to players who prefer to take calculated shots from cover point, or those who favor an relentless assault. Although the game’s hit detection is usually pixel-perfect, firing through gaps in cover can be hit or miss.

As a catalyst for the ballistic barrages, Rage supplies players with a healthy arsenal of mayhem-makers. While the setting may be in the next century, the game’s plotline of an enormous asteroid crashing into the earth means technological progress has atrophied. As such, a majority of firearms, weapons, and vehicles are all crafted from salvaged material, giving players a suitable impetus for the title’s procession of fetch quests, ambushes, and side missions. With multiple ammo types as well as the ability to craft helpful items ranging to healing bandages to sentry turrets, the title presents a wide variety of ways to subdue the game’s human and mutant populations. Arguably, one of the most gratifying weapons is the wingstick- a boomerang-like device that can decapitate a foe before returning to your inventory. 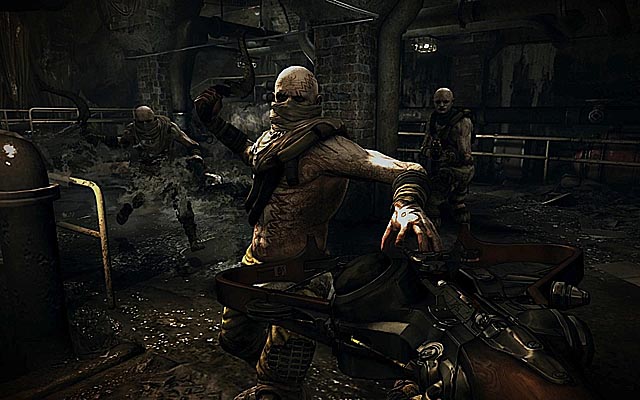 Complementing Rage’s visceral shootout sequences is a capable driving model. Beyond dashing across bandit-infested deserts which link the game’s three hubbed hamlets, there’s also a healthy amount of racing to engage players. With opportunities for time trials, nonviolent lap-based affairs, and weapon-based competitions, there’s no shortage of ways to earn upgrade tickets capable of augmenting a player’s buggies and ATVs. However, with players given infinite instant respawns and the ability to absorb power-ups strewn about the track, combat races can feel incongruous with Rage’s otherwise convincing activities. Despite this fissure in the title’s continuity, racing is undeniably satisfying, with a just enough control nuance and physicality to offer a refreshing reprieve from gun fights. Along with two-player co-op section culled from the main game, Rage also offers multiplayer racing events on the game’s third disk. While the vehicular combat probably won’t put a dent into Twisted Metal’s sales figure, it is a pleasing, if transitory supplement that most companies would probably charge for. Kudos to id for keeping it as a free pack-in.

Like any ambitious title, Rage isn’t free of the irregular blemish. From the unforeseen insta-death at the hands of an RPG-armed militant to a lack of closure in the game’s coda, there’s certain to be a constituency who will vocalize the title’s negligible faults. Yet, players who allow themselves to become immersed in Rage’s foreboding environments and tense firefights are destined to be delighted by one of the year’s most gratifying first and third-person experiences. 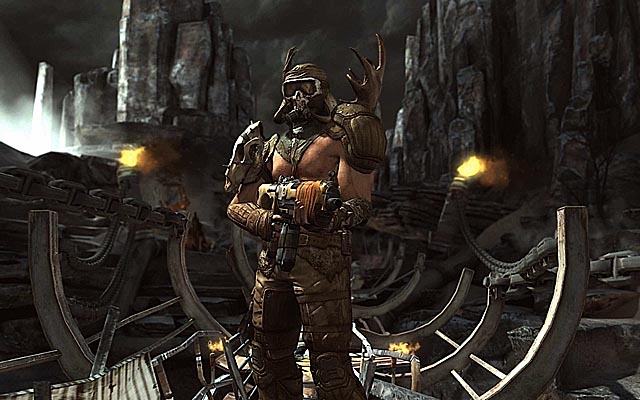