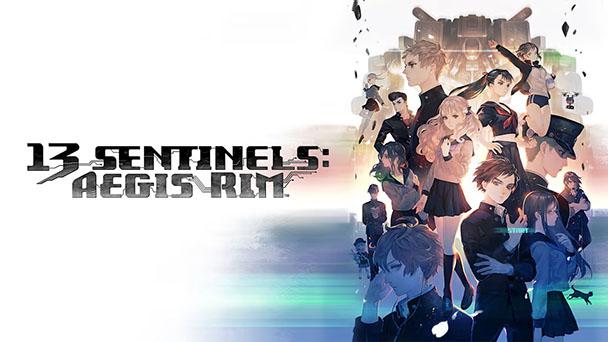 Best known for Odin Sphere, Muramasa: The Demon Blade, and Dragon’s Crown, Vanillaware could have kept their fanbase content by offering a succession of gorgeous, side-scrolling action titles. But when they released 13 Sentinels: Aegis Rim, the Osaka-based developers ventured into untested territory.

A bold blend of visual novel that interweaves stories build around a cast of thirteen characters, Aegis Rim also eschews the expected representation of mecha and kaiju battles. It’s an exceedingly ambitious title, that for the bulk of its thirty-hour playtime is filled with surprise. Pleasingly, the Switch port is mostly proficient, extended Japanese as well as English voice acting from the start (the original PlayStation release patched in the latter at release.) 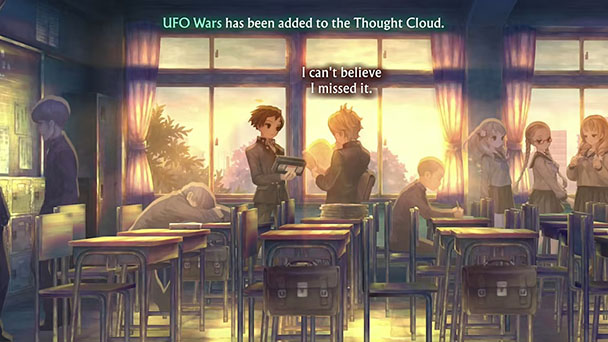 References Abound, But So Does the Feeling of Originality

With many studios reliant on established formula, it was refreshing to witness Vanillaware willing to take a risk. Afflicted by delays and arriving at the twilight of the PlayStation 4’s lifecycle, commercial viability for Aegis Rim was uncertain. Upon release in Japan, its debut was disappointing, with a meager 34K sales in it’s first week in Japan. But eventually word of mouth spread, enticing players across the rest of the world. Eventually, it become a modest success, with sales toppling the 500K mark. Undoubtedly, every iota of the game’s success is deserved.

Delve in and you’ll experience the moments of delight and wonder that rescued Aegis Rim. With an inventory of science fiction topics (time travel, androids, UFOs, secret agents, and even a talking cat), Aegis Rim often feels like stumbling across an ambitious manga that never officially made it to Western shores.  Brimming with cultural references both obvious (E.T. The Extra-Terrestrial, Neon Genesis Evangelion) and obscure (Megazone 23), the game manages to feel familiar yet resists piggy-backing on top of other properties. 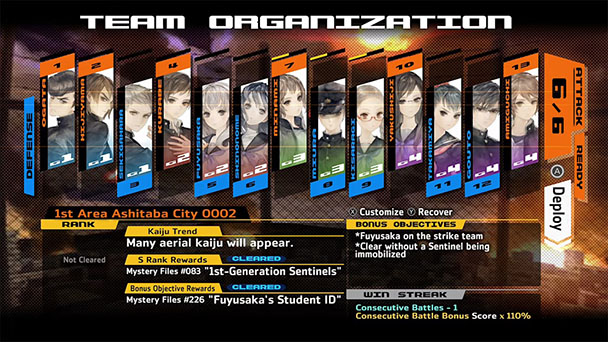 A Complicated Tapestry of Plotlines

Long before the Academy of Motion Picture Arts and Sciences recognized Alejandro González Iñárritu for Birdman and The Revenant, the director was braiding plotlines in nonlinear layouts across films such as Amores Perros, 21 Grams, and Babel. The effect was consistently dazzling, insistently requiring a viewer’s complete attention, as Iñárritu stitched together narrative fragments to entangle a set of disconnected characters, gradually revealing their shared fates.

13 Sentinels ups the narrative ante even higher, with an extended cast and action that seems to take place across no less than five distinct eras. The game could have easily become a convoluted muddle of unremarkable characters. But a meticulous amount of preparation and care went into the proceedings. It’s downright fascinating to witness how each member of the ensemble interacts with one another. Although many of the leads are rooted in trope, Aegis Rim injects nearly all of them with interesting traits and personalities that challenge an attempt at stereotyping. You won’t love all of them, but there are some leads that might leave you longing for more time together. 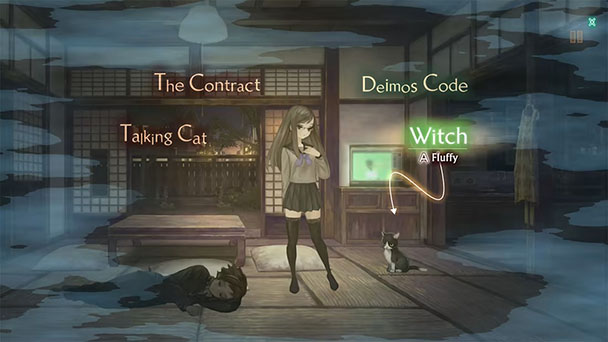 Vanillaware’s trick is letting players into the heads of each character. Beyond the customary interactions prompted by maneuvering around each 2.5D scene and conversing with different people, you’ll also have access to each protagonist’s thought cloud. This is a collection of keywords that grows over time articulating the internal thoughts of each character. Wisely, the developers convey both conversations and contemplations succinctly, avoiding the loquacious exposition of some visual novels.

Pleasingly, if you feel the need to review conversation for details, Aegis Rim allows you to revisit previous dialog. Should you ever feel confused, the game extends a listing of events in chronological order with the invitation to replay previous seen sequences. 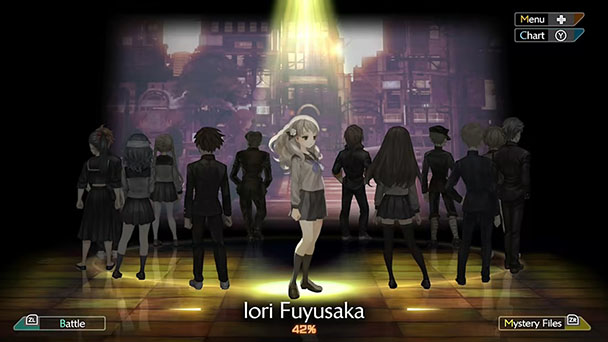 We’re All in This Together

Given the game’s ambitions, a few minor blemishes are present. Some obstacles that need to be solved to push the plot along are incredibly straightforward. If someone requests an item, picking it up and presenting it to them feels insignificant. On the other hand, you’ll occasionally reach an impasse in a character’s plotline. Progress can’t be made until you jump to another character and trigger an event. Sometimes, you’ll have to wait for time to advance.

But the bigger problem is that momentum runs out too early. There’s a persistent succession of disclosures, and an escalating intensity for most of the game. But just before the climax approaches, it becomes a bit too easy to predict the large reveal. But given the quality of characterization and just how masterful the myriad of smaller twists are handled, late-game obviousness can be forgiven. Also know that while there are bits of branching dialog (which are marked for replay), there aren’t multiple endings. Undoubtedly, that would have completely overcomplicated things. 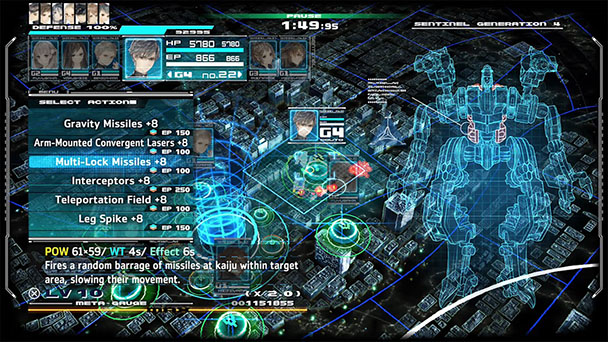 In sharp contrast to the hand-drawn aesthetic of conversation, the game’s (mostly) real time strategy showdowns use a completely different visual style. Here, most of the rich details of character expression and body language are relinquished for overhead maps and small picture-in-picture windows of each character. Teams of six characters, culled from the cast of thirteen take to cities in the hopes of stopping enemy incursions.

Pleasingly, Aegis Rim extends a lot of variability here, which feel invigorating. Different Sentinel mecha offer distinctive abilities that range from being a powerful melee fighter, extending long-ranged attacks, or are flying machines outfitted with shields and lasers. Repelling assaults can be straightforward on the game’s easier difficulty setting. But elevating the level of challenge means you’ll have to maintain a tactical advantage against waves of foes. In execution, battles are robust, offering the kind of depth that should satisfy armchair strategists. From taking down a resilient foe with a well-aimed shot to exterminating a multitude of opponents with rocket blasts, there are an assortment of gratifying moments. 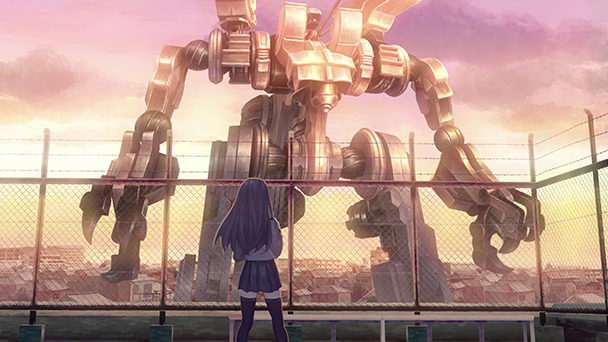 Platform Comparison
When played in docked mode, there’s a very slight haziness due to the drop in resolution. But unless you’re comprising the two iterations of the game side by side, you’ll probably never notice the slight difference. In handheld mode, the size of the Switch screen obscures any differences in fidelity and the ability to play on the go is an attractive dividend. The sole downside in that’s there’s no touchscreen support.

Pleasingly, dual audio is available from the start. And while personal preferences favor the original Japanese voice cast, the English actor deliver a capable reading. Given that recordings were completed remotely during periods of social isolation, the work is especially impressive. As for the localization itself, the Switch ports offers the same skilled translation, with a handful of very subtle changes to some phrasing. 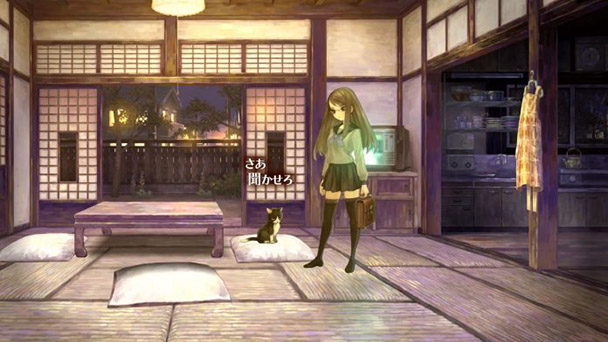 Upraised by a prodigious score from Hitoshi Sakimoto (Final Fantasy Tactics, Radiant Silvergun, Vagrant Story), 13 Sentinels: Aegis Rim is undeniably one of the most ambitious offers to arrive on Switch. Narratively, the title’s entwining of plot strands and inspired world building is unrivaled. What’s more, the game adeptly leaps from heartfelt confession to giant science fiction reveal with staggering suppleness. While Vanillaware could have easily iterated on their previous successes, the team’s willingness to venture out in an audacious new direction was praiseworthy. 13 Sentinels’ aim is high, but amazingly the studio pulls it off with nary a hitch.

13 Sentinels: Aegis Rim was played on Switch
with review code provided by the publisher.

Summary : Good luck finding a game that crams as much ambition, heart, and care as 13 Sentinels: Aegis Rim. Like any respectacle game with mecha, the title never forgets that combat is most exhilarating if we care about the people inside the machines.