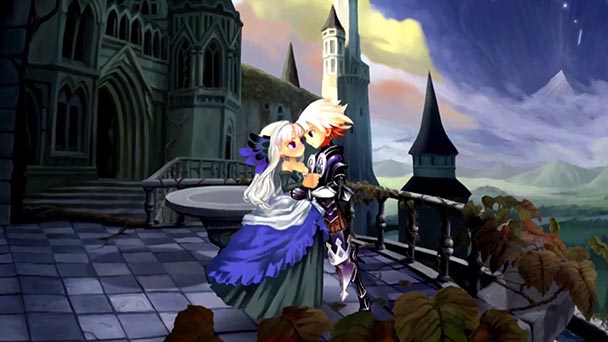 In the home video market, the Director’s Cut is commonplace, with the film’s creator able to get a second chance at realizing their artistic ambitions. It’s typically an artistically-driven endeavor, removed from the imperative deadlines and studio interference that can dilute aspiration. When the game industry attempts a remaster, it’s usually wholly commercial, with publishers often porting popular titles in an effort to pad the company coffers.

Which makes the release of Odin Sphere Leifthrasir such a gratifying experience. Sure, Osaka-based Vanillaware could have tread the path of least resistance, offering an effortless upscaling that would have been a financial windfall, given the original game’s fervent following. And while the developer’s delivered the obligatory visual upgrade, they also thoughtfully transformed many components, renovating the game’s combat system, planting procedure and level design. Rapid fans of the 2007 PlayStation 2 release might be notice small details like the addition of new voice acting or small amendments to the game’s cutscenes. Essentially, Leifthrasir feels like a labor of love, rather than the usual halfhearted re-release. 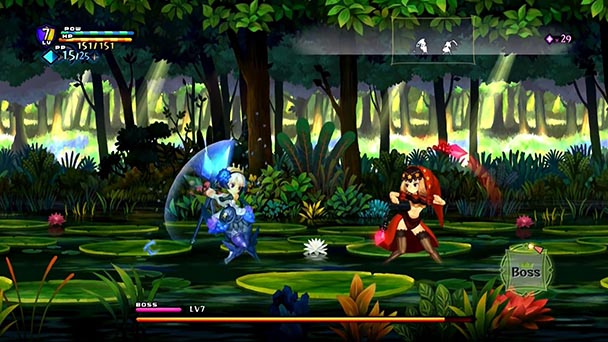 For those approaching Odin Sphere for the first time, the game’s opening screen hints at the magnificence to come. A young girl named Alice moves through a massive attic teeming with books, optionally picking up her pet cat Socrates. A press of the control pad situates the young girl in a comfortable chair, where she delves into a tome that half her size. Functionally, the sequence is little more than a fancy menu screen, but it feels like a gateway to Odin Sphere’s mythical world.

Soon, players are introduced to the Valkyrie Gwendolyn, the daughter of King Odin. Following her sisters defeat on the battlefield, the protagonist receives a formidable weapon known as the Psypher spear. Able to absorb Phozons, fragments of energy left by defeated foes, she is sent by her father to seize control of the Crystallization Cauldron, a giant artifact which allegedly can generate its own supply of Phozons. What follows is a fairy-tale like plot filled with intrigue and conflicting allegiances. 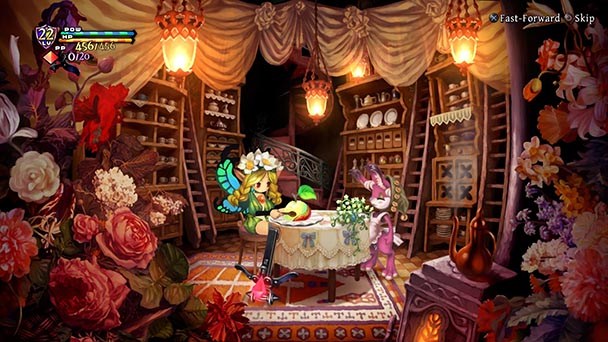 Gwendolyn’s journey also introduces players to a foursome of other characters, who eventually takes over Odin Sphere’s protagonistic duties. What’s particular interesting in how skillfully each new perspective is interwoven into the larger plotline, crafting an intricate tapestry of tales. While other games have experimented with Rashômon-like, Vanillaware’s effort is the closest interactive entertainment comes to exhibiting the subjectivity of perception.

While that means players will encounter the same environments and enemies five times over, each trek is differentiated by the mechanics of each character. From Gwendolyn’s ability to soar through the air and descend spear-first on enemies to Mercedes’s Psypher bow Riblam, which endows the fairy with a fierce ranged attack. Pleasingly, each protagonist’s storyline and speedy battle sequences prohibit fatigue from creeping in. 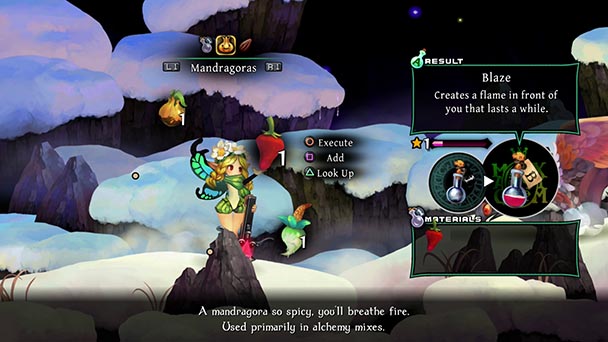 Agreeably, combat arenas take a variety of forms. Battlefields are often multi-tiered, with a faint glint signifying a concealed treasure. While typically flat, they’re functionally cylindrical, incessantly scrolling until players until gamers take an exit, with each corridor rendered on a minimalistic mini-map. Typically, stages escalate in intensity, with skirmishes with lesser foes punctuated by treasure rooms or conversational bits, before confrontations with mini- and stage bosses.

Although Odin Sphere could have followed convention, giving experience points after every fight, character grown is accomplished in a unique manner. In areas free of antagonist, gamers can bring up a radial menu, plant seeds, and release Phozons to instantly bear fruit. Once harvested fruit (and even sheep) not only rejuvenate your hit points but also push toward level growth. Of course, farming on the frontlines doesn’t come without sacrifice, with the resource also used to level up your quartet of secondary skills.

Alchemical amalgam can provide another perk to players. While players can toss found potions at bosses to summon volcanic fire or punishing storms while experimentation through blending items together can have remarkable results. Adding a potion to an existing item can modify it in unforeseen ways, contributing a curious and compelling nuance to the title. Subtlety, Leithrasir’s limited inventory keep you from being a hoarder. And as your needs to carry more items grows, the game compassionately confers more space, ensuring you don’t have to backtrack too much.

Platform Comparison
The 2007 release of Odin Sphere was a visual marvel, showing George Kamitani’s beautiful hand-drawn artistry. Unfortunately, during moments of intense action, the PlayStation 2 couldn’t quite keep up, result in glaring framerate drops. Gratifyingly, that’s not the case with Leifthrasir. Whether you play it on the PS Vita or the PlayStation 4, the game maintains a smooth, sixty frame-per-second rate. While Sony’s home system offers the advantage of higher resolutions and the ability to marvel at Kamitani’s meticulous sprite-work on a larger screen, either system is an ideal platform for the experience. 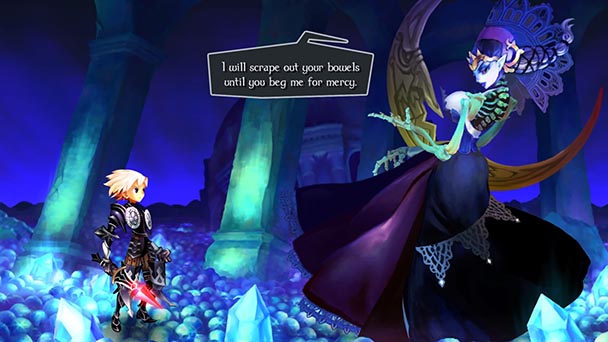 Like many of Vanillaware’s efforts, Odin Sphere Leifthrasir is a lush pixel paradise, filled with so much sumptuous artwork that’s is difficult not to take the occasional break to marvel at the amount of detail. Few developers can claim that their save file management screen is a thing of beauty, but with Leifthrasir, even this minor element was crafted with care to create a wholly cohesive, unified experience. Likewise, the game’s soundtrack is similarly beautiful, with Basiscape’s tracks both underscoring the Nordic mythos as well as creating bit of poignancy for the plotline.

Given the deluge of remasters and remakes, the last two years of gaming bears an uncanny resemblance to the previous ten. But don’t let the industry’s affinity for slapdash re-releases keep you from seeking out Odin Sphere Leifthrasir. This is the rare revitalization that carefully rethinks and reworks every component in the title, transforming a near-perfect game into a sublime experience. While Vanillaware offers the option to play with the original mechanics, there’s little reason given the amount of point-by-point enhancement. 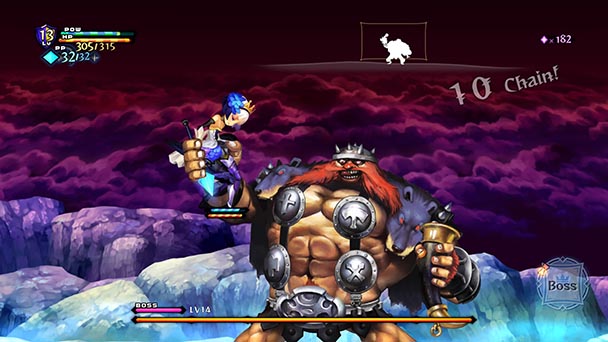 Odin Sphere Leifthrasir was played on the PS Vita and
PlayStation 4 with review code provided by the publisher.

Odin Sphere Leifthrasir
Platform: PlayStation 4, PlayStation 3, PS Vita
Developer: Vanillaware
Publisher: Atlus
Release date: June 7th, 2016
Price: $59.99 on PS4, $49.99 on PlayStation 3, $39.99 on Vita
Languages: Japanese or English voice, English text
Odin Sphere Leifthrasir review
In the home video market, the Director&rsquo;s Cut is commonplace, with the film&rsquo;s creator able to get a second chance at realizing their artistic ambitions. It&rsquo;s typically an artistically-driven endeavor, removed from the imperative deadlines and studio interference that can dilute aspiration. When the game industry attempts a remaster, it&rsquo;s usually wholly commercial, with publishers often porting popular titles in an effort to pad the company coffers. Which makes the release of Odin Sphere Leifthrasir such a gratifying experience. Sure, Osaka-based Vanillaware could have tread the path of least resistance, offering an effortless upscaling that would have been a financial&hellip;

Summary : Don’t let the industry’s inundation of lackluster remakes keep you from enjoying one of the PlayStation 2’s great action-driven role-playing games. Vanillaware has carefully refined nearly every aspect of the game, thoroughly modernizing its masterpiece.

Previous: One Piece: Burning Blood review
Next: Atelier Sophie: The Alchemist of the Mysterious Book