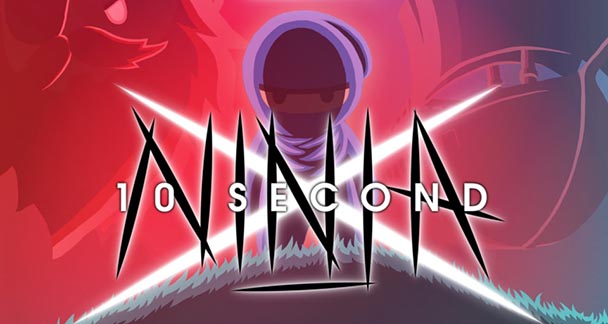 Occasionally older brothers offer serendipitous nuggets of wisdom. As a kid, a friend’s elder sibling was listening to Mötley Crüe’s “Ten Seconds to Love”, a boisterous anthem about intercourse in an elevator. To demonstrate his knowledge of the luscious, he asked the two of us if we had any idea what the song meant. Before we could muster up an answer, he explained “it’s about doing it”, punctuating his wisdom with a pelvic thrust that would seem to contradict any real sexual experience. In an attempt to unsettle him, I asked “But why only do it for ten seconds?” The reply was almost Zen-like in its simplicity and tone, as he explained that anything more would just be a waste.

While it’s extremely unlikely that the older brother would go on to create Four Circle Interactive’s 10 Second Ninja X, the spirit of his words could not be any truer. Here’s a game that boils play down to one sixth of a minute’s worth of wild stick gyrating, wild tapping, and split-second urgency. Execute it correctly and the feeling is nothing less that euphoric- often necessitating a recovery period before you jump back into the action. But more often than not, things won’t go smoothly- leading to a cycle of frustration, resentment, acceptance, and eventually repetition until things play out with spotless precision. To add a new mantra- success doesn’t stem from luck or even raw talent- but from doing the same thing repeatedly until you get it right. 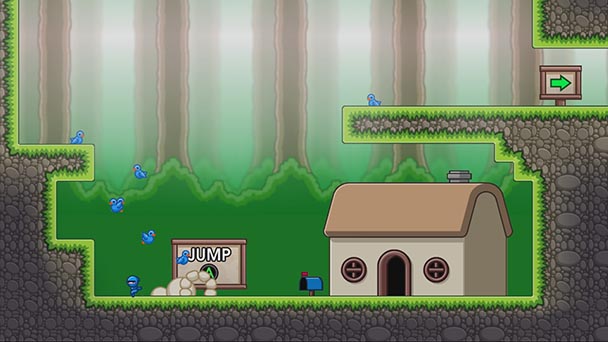 With sixty new stages and forty culled from 2014’s 10 Second Ninja, there’s a myriad of content awaiting armchair masochists. Largely, the toolset you are given is up to the task. The game’s eponymous blue-clad shinobi can leap, double jump, swing his sword, and throw shuriken in an effort to free the creatures imprisoned, Sonic the Hedgehog-style, inside each robot. While the ninja moves with the speed of an assassin, there’s the slightest bit of slipperiness, as if someone rubbed a bit of oil on the bottom of his tabi. Try to land on a narrow platform, and the pint-sized protagonist can slide ride off if you don’t anticipate the landing. But save for that minor transgression, the nimble shinobi goes where you tell him, and even boasts a sizable swing of his sword.

At least the initial set-up seems fair, even if the expectations of each stage seem extremely lofty. Before triggering the timer, players can peruse each level with the right stick, designing a strategy of where they want to use their limited supply of throwing stars. Beyond gaps that require precise joystick jockeying, there are also an ample abundance of elements like injurious electrical fields and switches that players must activate. Soon, it becomes clear that 10 Second Ninja X isn’t just an action game, but an elaborate puzzler requiring players to carefully scrutinize each stage to complete it in the specified time frame. 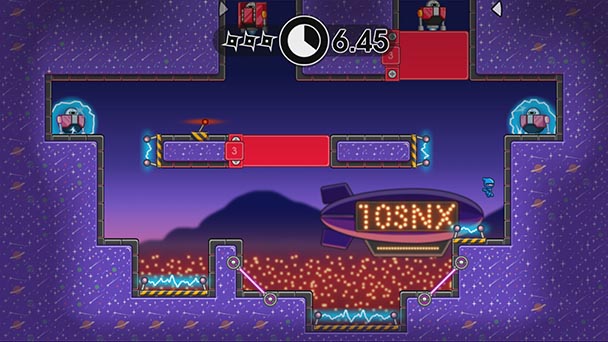 But eventually, being a 10 Second Ninja isn’t enough. You see, the game bequeaths up to three stars based on your performance, with a second star taking a lot of practice and a third one being a minor miracle. Unfortunately, there are points where you just can’t one-star your way through the game, requiring players to revisit and master previously played levels. For obsessives who thrill over shaving milliseconds off their completion times, it’s probably quite compelling. Put players accustomed to a “beat it once and be done with it” methodology will be miffed. At least five times, I had to turn the game off and cool down, before coming back to it later.

The payoff for perseverance is a frothy parody of SEGA’s blue blur. Antagonist Greatbeard undoubtedly riffs on Eggman/Robotnik’s eco-terrorist traditions, and is continually stymied by the Shinobi’s success. Supporting the satire is a perpetually cheerful tag-along character, who obviously is lampooning the hounding of Mr. Miles Prower. Another dividend for sticking with it are a Marathon mode, which really ups the level of challenge, an unlockable mini-game, and a Kat’s Crate Smash, a diversion where success gives tokens that players can use to purchase ghost runs. As the game gets unbelievably difficult later on, these playthroughs will likely be invaluable for most gamers. 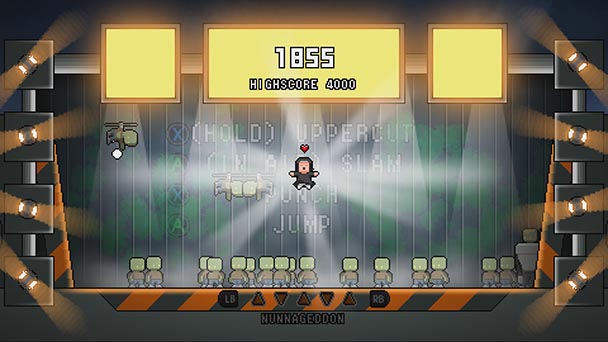 Players with a passion for difficult, speed-run driven recreations are 10 Second Ninja X’s target audience. The game acts as a gauntlet, separating the average gamer from ones who pursue extreme levels of adversity. If you fall into that latter category, 10 Second Ninja X is an affordably-priced that can produce hours of tormenting challenge. Those with mortal-sized ambitions might want to tackle something easier, like say, setting a new record on Sasuke/American Ninja Warrior.

10 Second Ninja X was played on the Xbox One with review code provided by the publisher.

10 Second Ninja X
Platform: PC, PS4, PS Vita, and Xbox One
Developer: Four Circle Interactive
Publisher: Curve Digital
Release Date: July 19th, 2016
Price: $5.99 via Steam, PSN (regular price $9.99), $9.99 on XGS
10 Second Ninja X review
Occasionally older brothers offer serendipitous nuggets of wisdom. As a kid, a friend&rsquo;s elder sibling was listening to M&ouml;tley Cr&uuml;e&rsquo;s &ldquo;Ten Seconds to Love&rdquo;, a boisterous anthem about intercourse in an elevator. To demonstrate his knowledge of the luscious, he asked the two of us if we had any idea what the song meant. Before we could muster up an answer, he explained &ldquo;it&rsquo;s about doing it&rdquo;, punctuating his wisdom with a pelvic thrust that would seem to contradict any real sexual experience. In an attempt to unsettle him, I asked &ldquo;But why only do it for ten seconds?&rdquo; The&hellip;

Summary : Completion of the first dozen stages in 10 Second Ninja X feels like an accomplishment. The remaining eighty-eight are the interactive equivalent of a four-minute mile.