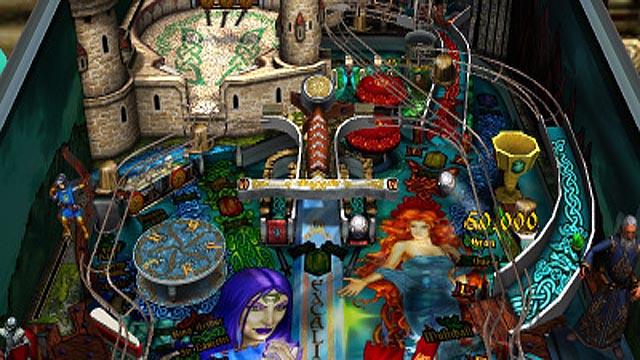 What is the concept? Sadly, the production of physical pinball machines has shrunk down into a niche industry. Whereas dozens of tables were produced during the amusement’s heyday, only two imminent entries dot the horizon:  Stern’s AC/DC and The Pinball Company’s Wizard of Oz. Realizing the dearth of new tables, Zen Studios has built a budding enterprise crafting digital simulation of the once-ubiquitous pastime.

With the release of Zen Pinball 3D, the developers bring four of their celebrated tables to 3DS owners. Exhibiting a ramp adorned with an Arthurian sword hilt and a ball-launching catapult on the bottom of the playfield, Excalibur is the obligatory fantast-themed table. Yet, with well-placed wire-ways and an abundance of tempting targets, it’s also the title’s best offering. Coming in a close second is Shaman.   Featuring an elongated playfield capable of building up ball speed, the tribal-styled table also has a pleasing, partially translucent mini-table at the base of the backglass. Rounding out the collection are El Dorado and Earth Defense, which offer competent homages to Uncharted and vintage sci-fi flicks as well as a gratifying selection of drop targets, rollovers, and spinners. 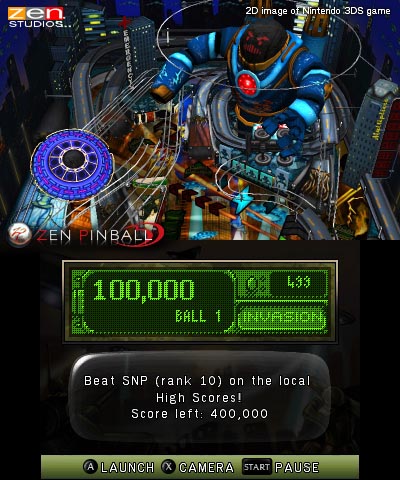 What are the game’s strengths? While Zen Pinball 3D’s tables looks like a muddled mess of indistinguishable features when the depth slider is turned off, when the switch is raised the title becomes transformed. Each separate element on the table becomes discernible with the addition of stereoscopic depth, transforming the top screen into a diminutive window which peers out into a near-photorealistic world. While 3D has been little more than a novelty is past titles for Nintendo’s portable, with Zen Pinball, it’s a near-necessity. Pleasingly, the collection offers a selection of eight camera options, ranging from a fixed perspective of the field to ones which subtly shadow the ball’s movement.

Complementing the solid action is a delightful set of superfluities. Online leaderboard support discloses how well players rank against their friends, countrymen, and worldwide competitors. Obviously, previously establish contacts are required to compare score with friends, but Zen Pinball 3D’s other tables don’t require friend codes. Additionally, each table is accompanied by an agreeable set of diagrams explaining key features and scoring opportunities as well as the ability to tweak many of the game’s settings in the game’s operator’s menu. 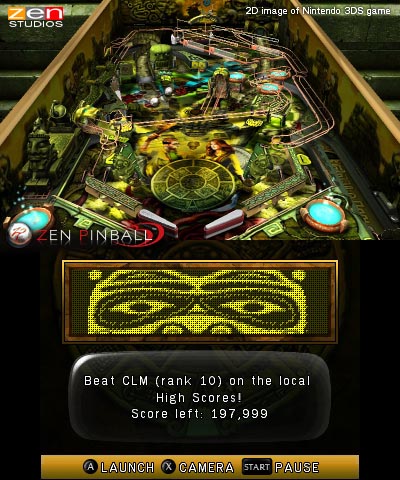 What are the game’s weaknesses?  Beyond the aforementioned setback in viewing Zen Pinball in 2D and a 10 second wait when loading new tables, the title is remarkably free of any impediments. Although some might find the demand negligible, offering a way to map the flipper buttons to other keys and/or the directional pad would have been a welcome addition. 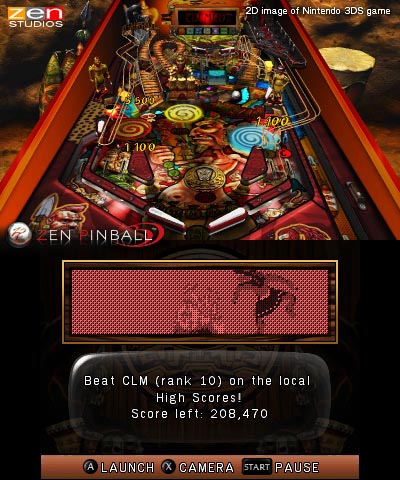 Would I enjoy this game? Ordinarily, eShop titles are easily identified by their simplistic graphics and limited amount of depth. Remarkably, Zen Pinball 3D rivals the visual fidelity and comprehensive playability of many cartridge-based titles, making its $6.99 price a comparable bargain. Serious pinheads should bypass the halfhearted adaption of Pinball Hall of Fame: The Williams Collection and bask in Zen’s triumphant collection.

Previous: Samurai Sword Destiny Review
Next: Podcast 9-6: All That and a Bag of Chips