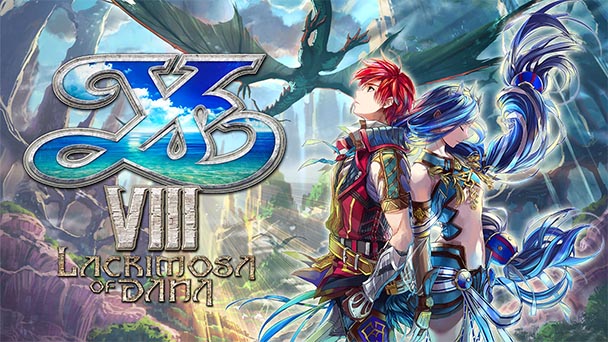 There’s the tacit expectation that franchises will evolve over time. But occasionally, the pressure to advance can spoil an otherwise splendid series when rash ideas or slipshod mechanics are needlessly shoehorned into a sequel. In the case of a once prodigious properties like Star Ocean, any accrued goodwill might even be undone when the developers release something as disappointing as Integrity and Faithlessness.

That push for gratuitous change has seldom been a part of Nihon Falcom’s game plan. The Tachikawa-based studio’s Ys franchise is a textbook example of this approach, exhibiting only prudent and protracted alteration across its thirty-year legacy. As the recent PC release of Ys Seven demonstrated, Falcom’s forte is channeling the quintessential components of classic gaming, combining timeless plot and engaging play in a manner that shirks trend. 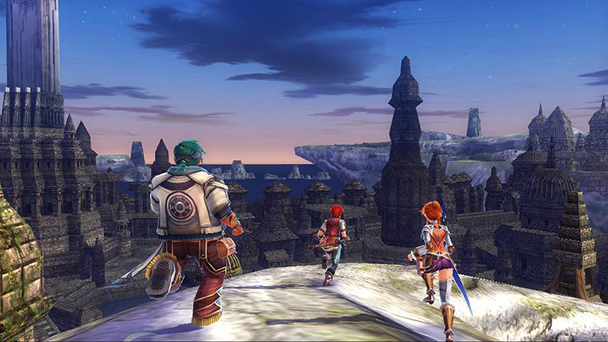 As such, players might approach the release of Ys VIII: Lacrimosa of Dana expecting a nostalgic take on the crimson-haired Adol Christin and his faithful sidekick Dogi. And in many ways, Lacrimosa obeys convention, extending a set-up that’s familiar and combat that revisits the enemy weakness system from Seven. Yet, in many more ways, the title is a gentle departure, taking judicious risks and sincerely trying to offer a fresh experience for loyal fans of the franchise. Straddling the obstinate space between reiteration and renovation, Lacrimosa of Dana delivers an experience that’s on the threshold of timelessness.

When the prologue opens with Adol aboard a ship, Ys loyalists will know where the plot is headed. As one of the unluckiest mariners around, Adol the Red find himself in peril when the vessel is attacked by a giant squid, sinking the craft. Fortunately, fate intervenes, and the protagonist awakens on the shore of Seiren Island, a landmass where legend maintains that no one has ever made it off the isle alive. 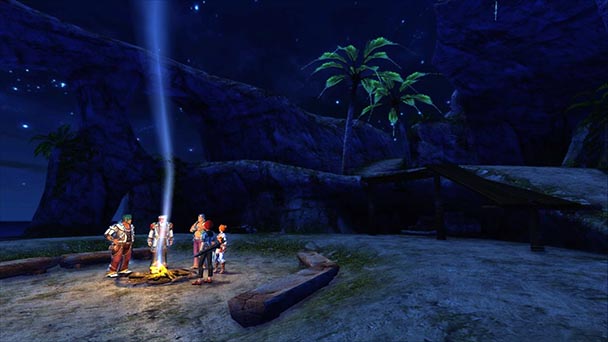 And if Lacrimosa of Dana were to follow routine, Adol would quickly learn of his role as savior from the local townfolk, shepherding the citizenry to safety as a calamitous event emerges. But here the role of great redeemer seems to remain vacant, as the red-haired lead is tasked with eking out an existence for a growing group of castaways on the island. Pleasingly, there’s a sense of responsibility and interdependence that reverberates through the game’s early hours, as survivors depend on each other.

What’s pleasing is the Seiren doesn’t feel like the typical town bustling with NPCs who were generated to contribute a few lines of dialog. Instead, Lacrimosa focuses on the team of survivors forced to band together in an effort to endure on an island that’s abounding with antagonism. As such, there’s considerably more dialog here than in most Ys entries. But there’s an upside to all the exposition, with players becoming privy to some well-written backstories that help make the title a memorable experience. Later, the game’s eponymous heroine arrives via dream sequences. Initially, these sequences seem to tarnish the well-crafted momentum of the game. But as the plotline persists, it gives way to a much larger story that’s more in line with the type of narrative that the franchise is known for. 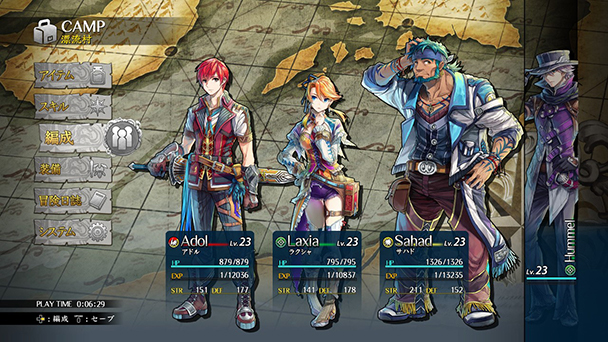 Naturally, combat is a core component of what makes Lacrimosa of Dana so enjoyable. Here, Falcom fall back on their customary approach, which aims to strike a balance between accessibility and nuance. Like Seven, parties are comprised of three members, who can be swapped with a press of the button. And while the AI is competent enough to hold its own, efficiency dictates switches to an adventurer who specializes in a certain type of damage (slashing, piercing, or smashing) that’s powerful against certain type of enemy resistance.

Pleasingly, combat, even again subordinate foes remains compelling throughout the game’s 30+ hour campaign. Much of this steps from a persistent sense of vulnerability. Although Adol and company can dart around like wildcats, a few errant moves near enemies can prove perilous. But Lacrimosa always provides players with the tools for success. Beyond individual skill sets, a well-timed dodge or guard can either slow time or elevate strikes into criticals. Like most contemporary Ys entries, combat is extraordinarily refined, mirroring the polish of an action game with a much-smaller scale. About the only stain on the system is the title’s lock-on system, which can focus on arbitrary targets, and muddle the camera angle. 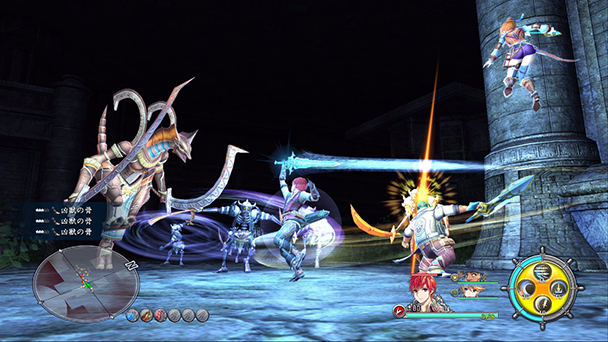 Unsurprisingly, boss battles are the true tests of proficiency, and for better or worse, Lacrimosa will toss a few pop-quizzes at players. During these sequences, a mastery of mechanics isn’t enough to survive. Instead, players must carefully observe movement and attack patterns, looking for opportunities for retaliation. But here, the big bads aren’t dummies, and when damage in inflicted, they’ll change their approaches, requiring an abrupt change in tactics from gamers.

After the original Japanese release of Ys VIII for the Vita, Falcom went back and retooled the game, adding a significant amount of new content. Beyond an extra dungeon and more backstory for Dana, and locales that are retooled at night, there are inceptions and suppression tasks. The former take place on the peripheries of your settlement, with waves of enemies encroach, recalling a tower defense-like game. Suppression runs are the opposite, With Adol and his comrades seeking out to destroy monster nests in the wild, before the propagation of foes threatens your encampment. While both veer toward the noncompulsory, both commissions are compelling and provide plenty of perks for players. 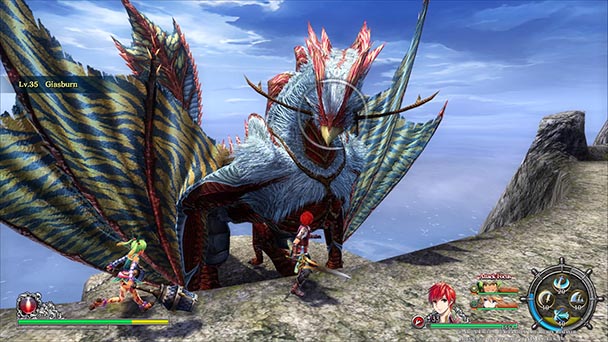 As the first Ys game published by NIS America, concerns were raised about the company’s ability to provide a proper localization for Lacrimosa of Dana. But save the sporadic instance of misdirected English voice-acting, and rare typo, the team did an adept job, mirroring the effort that XSEED has poured into the series. One potentially aggregating quirk from the original iteration occurs when players remap buttons. After the customization, the title continues to show the default buttons on-screen. On the PlayStation 4, the title runs fluidly, with only an exceptional dip from a solid sixty frame-per-second output. Sonicially, the game is suburb, with the JDK team entwining the strings and synths, creating a soundtrack that’s filled with memorable melodies.

Like Persona 5, Ys VIII: Lacrimosa of Dana feels like the series installment that could make gamers outside of Japan finally take notice of Falcom’s masterful series. The franchise has always been a magnificent merger of components, mixing the exhilaration of exploration, impassioned combat, and a plotline that rooted in timeless archetype. With Lacrimosa of Dana, the Tachikawa-based team builds on the series’ successful blueprint, ensuring any vicissitudes are essential.

Ys VIII: Lacrimosa of Dana was played on the PS4
with review code provided by the publisher.

Ys VIII: Lacrimosa of Dana
Platform:
PlayStation 4, PS Vita
Developer: Nihon Falcom
Publisher: NIS America
Release date: September 12th, 2017 (US)
Price: $59.99 (PS4 and PC), $39.99 (PS Vita)
Language: English and Japanese voices
Ys VIII: Lacrimosa of Dana review
There&rsquo;s the tacit expectation that franchises will evolve over time. But occasionally, the pressure to advance can spoil an otherwise splendid series when rash ideas or slipshod mechanics are needlessly shoehorned into a sequel. In the case of a once prodigious properties like Star Ocean, any accrued goodwill might even be undone when the developers release something as disappointing as Integrity and Faithlessness. That push for gratuitous change has seldom been a part of Nihon Falcom&rsquo;s game plan. The Tachikawa-based studio&rsquo;s Ys franchise is a textbook example of this approach, exhibiting only prudent and protracted alteration across its thirty-year legacy.&hellip;

Summary : Ys VIII: Lacrimosa of Dana is yet another adept entry in the long-running series. It’s evident that Nihon Falcom truly cares about the series and its reception, delivering a textbook sequel that’s bound to delight both fervent fans and franchise newcomers.