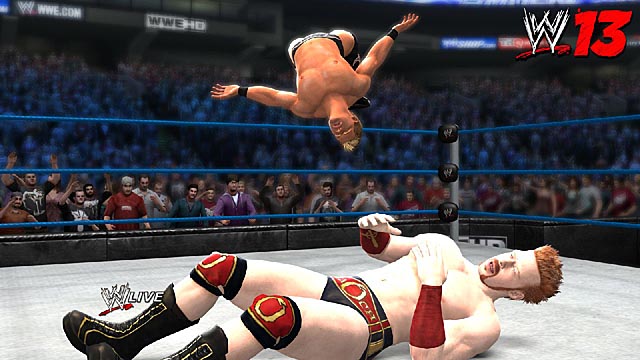 For the vast majority of my video gaming career, pro-wrestling games have been my go-to genre. Long car trips and weekends at my grandparents’ house went by in the blink of an eye thanks to various interactive takes on my favorite “sport”. Perhaps it has something to do with the fact that I always wanted to be wrestler, but I just can’t get enough wrestling games. Because I have played north of seventy games from throughout the genre, screw-ups by a developer usually stand out to me. With WWE ’13, the number of botches by THQ and Yuke’s approaches Sin Cara levels.

On paper, WWE ’13 could easily be mistaken for the best wrestling game of the generation; it has a massive roster, a new single player mission mode, an endless season mode, and enough unlockables to fill the Undertaker’s hearse. Once you begin playing WWE ’13, however, the game’s faults begin to surface at an alarming rate. In my very first match, John Cena’s character model channeled the spirit of Stretch Armstrong during a headlock and horizontally twisted from one part of the ring to another. My second match was even worse as Brodus Clay’s entrance became out of sync with his theme music, in addition to having the crumpled up character model of Eve Torres phasing through the ring while he was dancing. To top it off, the match itself glitched when I tried to use Zack Ryder’s finisher on “The Funkasaurus”, resulting in “Long Island Iced Z” getting stuck in an endless running loop in one of the corners of the ring. Glitches like these don’t happen in every match, but pop up more often than they should. 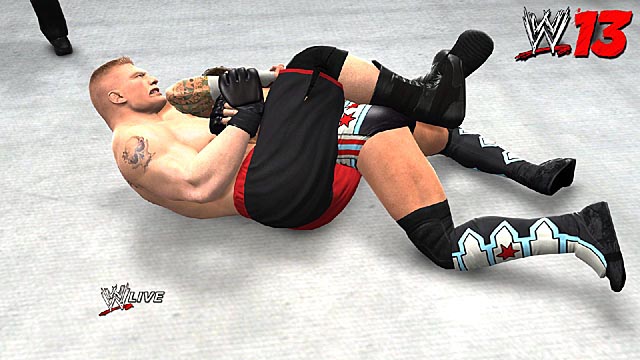 We aren’t done talking about glitches, yet. There is one gameplay glitch that you will encounter in every match. Because of a deeply-rooted bug, the game suffers from a shortage of two counts. It is all too common for the A.I. to kick out of one or several finishing moves at the count of one. In most cases, if you are pinning the A.I. and see the number two, it’s almost always because you’re going to get the victorious three. This problem “breaks the illusion” of the game, thereby rendering all of the effort to simulate the fantasy world that the WWE bases itself in an absolute waste. Wrestling is about suspending disbelief and leaping into a “larger-than-life” universe where the unlikely just might happen. John Laurinaitis, a man who hasn’t been active in the ring for a decade, kicking out of a pin at the count of one after eating several finishers from the company’s top star, C.M. Punk, is not something that should ever happen. And yet, WWE ’13 has scenarios like that play out on such a regular basis that one can’t help but wonder how it went unnoticed during the course of development. Additionally, I, too, found myself escaping pins at the count of one quite frequently because of the revised pinning system.

For better or for worse, WWE ’13 plays almost exactly like last year’s reboot of the Smackdown Vs. Raw franchise. Grappling is divided up into four different positions (front facelock, side headlock, wrist lock, and waist lock), each with their own set of moves. Chain wrestling is as fluidly-animated as ever and acts as a brilliant cover for excessive countering. One new countering ability that WWE ’13 brings to the table is something called “catch finishers”. Think back to Wrestlemania 25 when the Undertaker and Shawn Michaels had what many consider to be the greatest match ever. The conclusion of the match saw HBK attempt a top rope moonsault, but was caught in mid-air by the Undertaker and tombstoned. With catch finishers, you can have moments like that in WWE ’13. Getting pinned after a catch Tombstone stands out in my mind as the most satisfying loss I’ve had in a WWE game since the Nintendo 64 days. Another comparison to that match worth making is that WWE ’13 has a new “Match Experience” setting that allows you to have epic, twenty-plus minute matches, normal, five-to-ten minute TV-length bouts, or three-minute squashes. 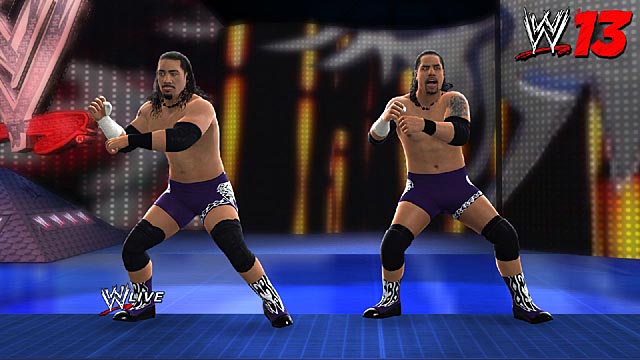 The Road To Wrestlemania mode of recent years has gotten future endeavored in favor of the new, mission-based Attitude Era mode. Making use of the game’s massive roster, original and re-recorded audio clips, and heavily censored video packages, the Attitude Era is a Frankenstein’s monster retelling of the period of time from the late 1990′s into the early 2000′s of the then-WWF. The mode is divided into six chapters, with each one containing several historically-accurate matches. There are usually two sets of objectives for each contest; match objectives and historical bonus objectives. The latter has objectives based on the real-world matches, while the former is the goal to move on to the next match. Completing all historical bonus objectives rewards you with hidden content that can be anything from new wrestlers or divas to championship belts and arenas. It’s a great carrot on a stick, but most players will turn the difficulty down so they can grind through as quickly as possible. Glitches come into play once again with the Attitude Era mode. In one particular match, the objective was to knock out Paul Bearer in under one minute, yet, when I tried to do a grappling move on him, both characters got stuck in an endless tie-up that lasted until the time ran out or I restarted the match. This happened to me no less than three times in a row. Simply put, unacceptable.

If there’s one thing that WWE ’13 has going for it, it’s the sheer amount of content that it brings to the table. The roster of eighty-five superstars (not including on-disc and regular DLC) is split between the modern day WWE and the Attitude Era. It’s also the largest gathering of Superstars ever in a WWE game. From the obvious inclusions, like John Cena, C.M. Punk, “Stone Cold” Steve Austin, and The Rock to mid-card talent such as Zack Ryder, the Godfather, Ken Shamrock, and Big Boss Man, the line-up is phenomenal. Regrettably, THQ did cut some corners with the roster. Several character models are either rehashed from previous games or look like glorified Create-A-Wrestlers. Some animations have also been recycled from as far back as 2003′s Here Comes The Pain. 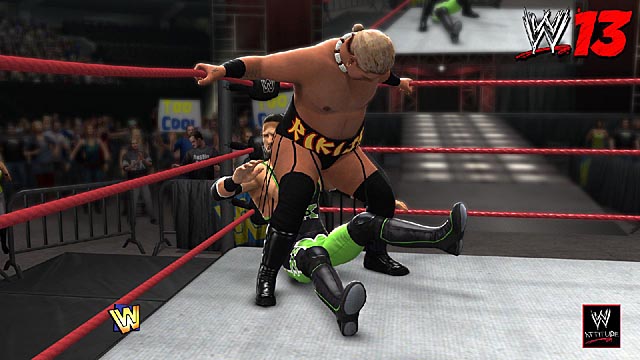 The power of Vince McMahon is in your hands in the never-ending WWE Universe mode where you form your own shows with the wrestlers, championship belts, and arenas of your choice. While it replicates the feel of WWE television rather well, this year’s version has removed the opening pyrotechnics and music for shows. Because of this, events tend to blend together if you don’t go back to the Universe’s menu. Storylines have branching pathways now, but in my time with the mode I never encountered any of them. Match types received a boost thanks to the resurrection of the King of the Ring tournament and the PlayStation One favorite “I Quit” match. Factor in the various creation modes and you have enough to keep you occupied for quite some time.

Jumping into the ring online is quick and easy. After choosing either ranked or player match, you get to narrow opponents down by match type, wrestler gender, whether you want to allow user created content in the match, connection strength, etc. Unless you’re doing a rather obscure combination, the wait to get matched up with an opponent lasts a matter of seconds. Even when playing as late/early as three A.M., there was hardly any wait to get into a match. The online gameplay is solid. I didn’t notice much stuttering or input lag and when I did, the matches were still playable. There is a ranking system that awards points from several categories once a match has finished. With enough points, you level up. Aside from a few achievements, this is primarily a bragging rights feature. Try to act surprised when I say that the online has a few glitches. A synchronization issue in some matches can cause both a win and a loss to be added to a player’s win/loss record. It’s not a critical error, but it’s bound to get on the nerves of some people if and when they encounter it. 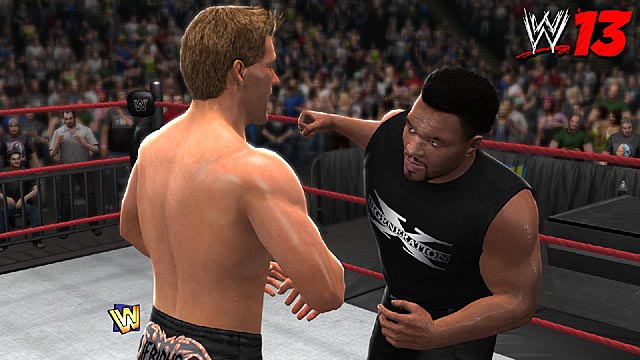 Ultimately, WWE ’13, in its current state, is an unfinished product. After a few months of patching, it could become the best wrestling game of the generation. However, I cannot grade it on potential. As the final product stands now, I’m just not comfortable recommending it. THQ still has more work to do to make WWE ’13 truly worth your hard-earned money.