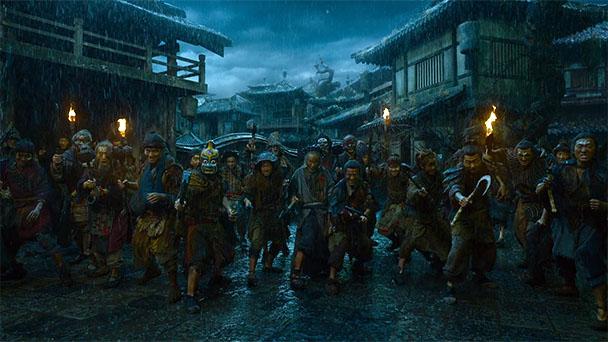 Real and imagined worlds intersect in director Lu Yang’s CGI-filled spectacle, A Writer’s Odyssey. Recalling the neo-noir look and nervous intrigue of the original Matrix, the film’s opening is awash with torrential rain and the peril of a young girl being pulled into an inky abyss. The child’s nickname is Tangerine and for the last six years, her father Guan Ning has fruitlessly searched for her. His desperate demeanor is reflected by his mop of hair. While flashbacks show it was once stylishly cropped and shampooed, now it’s grown unruly and unkept. Sullen eyes signal that hopeless has nearly set it, while the film’s succinct dialog details a divorce.

There’s a glimmer of hope when Guan climbs atop a hill, poised to target a truck driven by two human traffickers. A fight ensues, the bag guys escape, and Guan is arrested when the police arrive. But much like Trinity in The Matrix, assistance arrives when a young woman helps the protagonist make a quick escape. Here, the protagonist learns of another, separate world connected to our own. 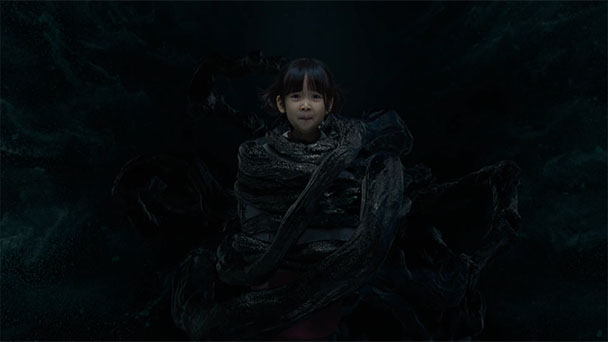 Without decelerating, A Writer’s Odyssey discloses its conceit. An author has been live-streaming readings of his fantasy fiction, Godslayer. It’s an imaginative tale where a warrior named Kongwen seeks to bring down a malicious overlord called Redmane. But the readings seem to have an increasingly injurious effect on a tech-company billionaire. Unsurprisingly, the media mogul agrees to help Guan reunite with Tangerine, but only if he kills the writer.

A Writer’s Odyssey’s running time surpasses the two-hour mark, but what follows is a surprisingly taut film that shift between a gritty reality and representations of Godslayer’s prose. Smartly, Lu Yang avoids the kind of longwinded dialog that is all too common in action-driven blockbusters. This decision keeps pace lively and helps hold the viewer’s interest as you eagerly wait for the next reveal. 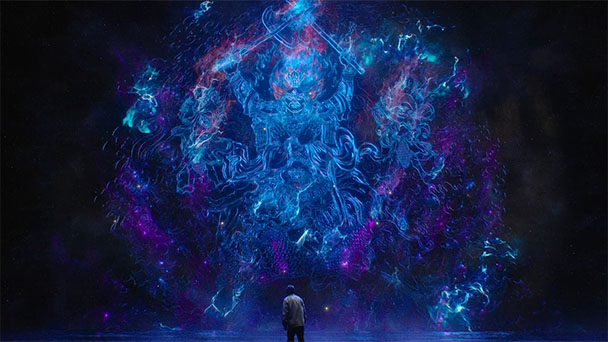 The downside of this approach are a few elements that don’t receive much explanation. Guan can throw objects with superhero-like speed and precision, with other real-world characters reveal similar physical traits. Instead of offering some kind of elaborate justification, it’s all left quizzically ambiguous. Personally, I grow fatigued when films feel the need to explain every little detail.

But that’s not the only risk Lu Yang takes. Often, movies that depict two distinctive worlds make one of them more interesting than the other. On one hand, Godslayer offers synthetic spectacle, with computer generated imagery rendering massive mountain cities and a duel between mythical creatures that looks culled from the next must-play video game. Yet, in the real world, Guan’s throwing arm provides plenty of punchy action and a scene with flung items that captures the intensity of a first-rate gunplay sequence. 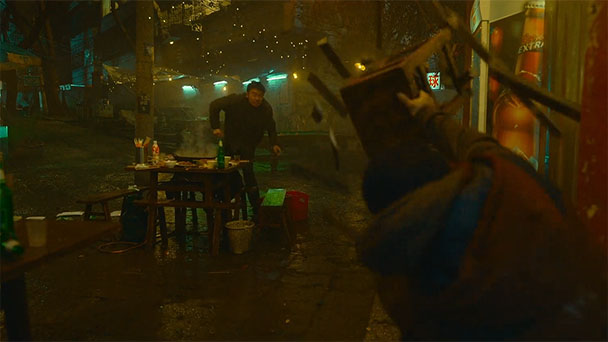 While the mixing of human actors and CG-modeling can look a bit unnatural at times, scrutiny might stem from watching this on the Blu-ray’s crisp 1080P mastering. The Writer’s Odyssey deserves to be seen on the biggest screen possible, with its depiction of oversize villainy filling your frontal perspective, while tooth fillings rattled by DTS 5.1 stereo. Yes, Odyssey is the kind of film that might goad you into shopping for a bigger screen and an overpowering sound system just to get close to the experience.

Look past the technical wizardry, the rest of A Writer’s Odyssey’s is just as fun. There’s some playful satirizing of behemoth e-commerce site, Alibaba. In this case, Aladdin’s lead executive spouts familiar platitudes on stage which contradict his murderous intentions. A monk defeated in battle becomes a sentiment suit of armor, with a single roving eye and acerbic attitude that recalls Kill la Kill’s Senketsu. And credit should be given to director of photography Qiming Han who worked with Lu on the Brotherhood of Blade films. Sporadically, the film’s shot composition and lighting dazzles, tempting home viewers to pause the action and embrace the film’s exquisiteness. 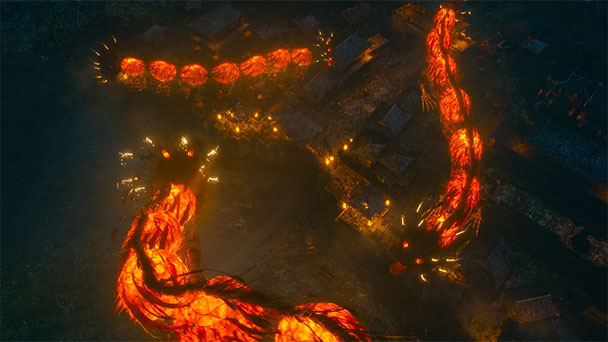 While I love a good popcorn film, Hollywood’s output is becoming a bit homogenized, with films starting to feel crafted on the assembly line. While The Writer’s Odyssey’s third act drops the actors in favor of CGI spectacle, the journey up to that point offers a number of expositional and stylistic departures. While most movies are content with tackling a single genre, Odyssey is more ambitious, shifting timbres and keeping viewers on edge. The medium could use more graceful mutability.

A Writer’s Odyssey is available from Shout Factory on March 8th, 2022 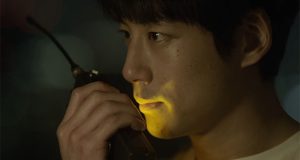