The Witch and the Hundred Knight 2 review 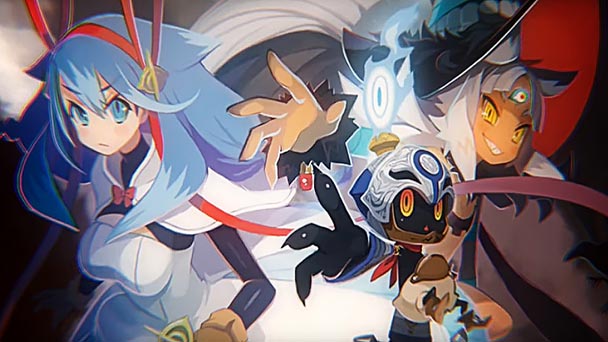 While many games might suffer a misfortune or two, 2014’s The Witch and the Hundred Knight faced a perilous number of tribulations. Development of the title was anticipated to take a year and a half. But the team struggled with creating a visual appealing, action driven, three-dimensional title, delaying the release an additional year. Once the title was published, a bug sporadically disrupted play, dropping players to the PlayStation 3’s system menu. The error undoubtedly didn’t help review scores, but a protagonist who was unflinchingly meanspirited through most of the game also didn’t sit well with critics. While the title sold decently in Japan, audiences were largely apathetic in the West, even toward a PlayStation 4 version that improved upon the original game’s execution.

Despite all these issues, there was protentional in The Witch and the Hundred Knight. Sure, the story was quite dark and identification or empathy with any characters was absent through most of the storyline. But the game’s mechanics, which recalled from Diablo’s loot-driven, creature-crushing empowerment were solid. Unsurprisingly, Takehito Harada’s (Phantom Brave, Disgaea) artwork exuded classic Nippon Ichi charm, lending the mostly malevolent Metallia an aura of vibrantly-hued beauty. With the release of The Witch and the Hundred Knight 2, NIS gives the concept another chance, mending Metallia’s most unappealing elements. 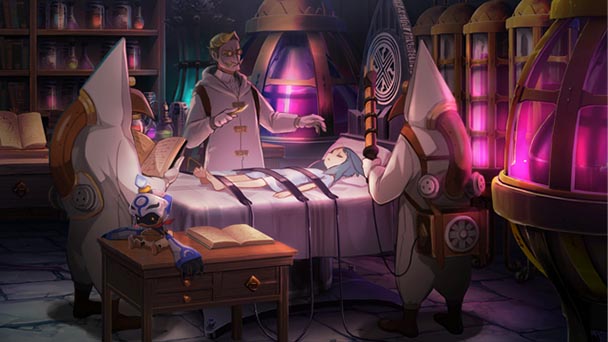 The original game’s concluding cinematic hinted at the return of its lead, but instead Hundred Knight 2 provides a predominantly new cast. This time out, the game opens with a young woman named Amelie who’s worried about the disappearance of her younger sister, Milm. Auspiciously, the little sibling shows up, muddied from a frolic in the nearby forest, and also with a vertical lesion on her forehead. Closer inspection reveals that it’s not an injury, but the growth of a witch’s eyelid. Since Amelie and Milm’s parents were killed by a witch, the two hastily opt for surgery to remove the malignant growth and keep the girl from becoming a witch.

However, the procedure is experimental, and when a scalpel is applied to Milm’s head, misfortune strikes, killing the nine-year old girl. Once the majority of the surgical team leave the room, she awakens as a merciless witch named Chelka, while the doll that accompanied her into the hospital becomes a sentient Hundred Knight. Wisely, the sequel’s cast of miscreants don’t descent into the same levels of depravity at the original game. This time out, instead of offering eleventh-hour redemption for the lead, Hundred Knight 2 gives glimpses of the innocent girl that Chelka has body-snatched, mollifying the maliciousness of the character. And then there’s Amelie, who naturally feels protective of her sister, but also works for an organization that hunts down witches. 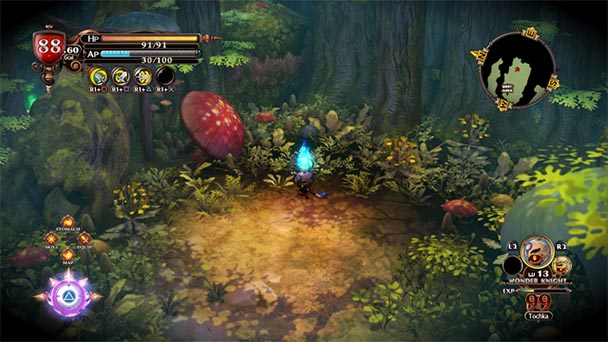 While the characters are more relatable, you won’t have an opportunity to get to know all of them. Hundred Knight 2 favors breadth over depth, so there’s a surplus of secondaries that won’t add much to the proceedings. Another element that feels undercooked is the return of the Hundred Knight’s Self-Assertation decisions.  During the game’s visual-novel like expositional bits, the diminutive sidekick can comply or disagree. While these influence which of the three endings you’ll see, too often your decisions won’t seem to have much of an effect on things. Perhaps the writers are offering commentary on the nature of free-will. If that’s the ambition, it’s commendable, but the sub-text needs to be more obvious.

But beyond having limited influence, being Chelka’s subservient manania is a lot of fun. Pleasingly, you are given authority about how to tackle enemies. Facets are the game’s class system, permitting the players to switch between six different forms that each have a distinctive armor and skill-set, ranging from the tank-like Power Fortress to the hit-and-run tactics employed by the Noble Raptor. Further customization is found in the game’s weapon system, which allows players to create their own custom combos by equipping up to five weapons simultaneously. 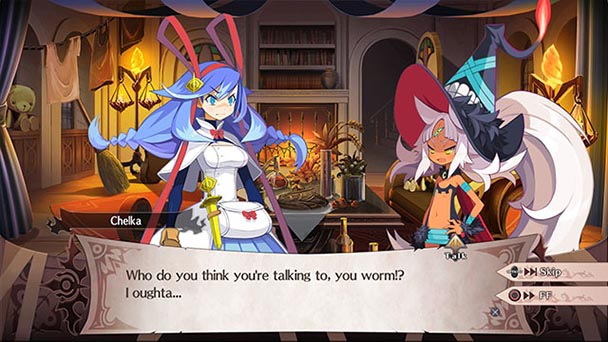 With selections that issue weighty focused strikes, wide swaths, ranged strikes in three different types of attacks, as well as ailment-induced hits, there’s a lot of versatility to combat. Pleasingly, Hundred Knight 2 does a good job at conveying the efficiency of your offensive output. Beyond showing the amount of hit points deducting from foes, the game also displays text telling if your attack was effective or not.

Although the randomly generated stages can be a bit plain, with each typically pushing players toward a level boss, any environmental homogeneity is counter-balanced by the variety of your arsenal. Agreeably, Hundred Knight 2 loot algorithms distribute just enough of the rare, slightly more powerful stuff to persistently re-examine your load-out, pushing players to engineer new combos. This time out, executing a string of five hits can trigger the Depletura, which if you’re able to successfully attack another creature, grants the Hundred Knight with more Adrenaline Points, and GigaCalories. 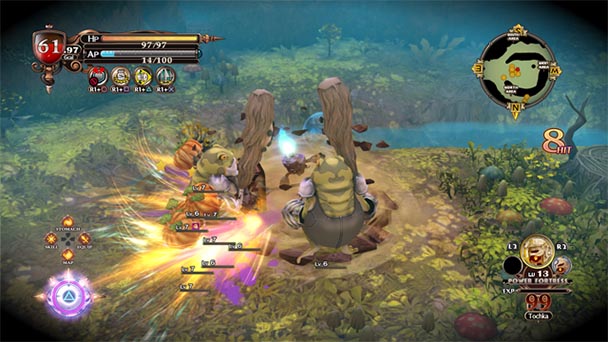 Yes, there’s still a soft-cap on stage grinding, with actions gradually depleting the manania supply of energy. Beyond the aforementioned Depletura to restore your vitality, a touch of the DualShock 4’s touchpad brings up a radial menu of consumables that offer slender rejuvenations. Hunger is also the theme behind the inventory system, which demonstrates another of Nippon Ichi’s creative approaches to item management. Here, there’s a group of grid spaces designed to resemble the Hundred Knight’s stomach, which gradually grows as he develops. Complete a stage and you’ll get to keep any goodies left in your gut, while disaster produces a bit of a purge. Leave it to the team in Gifu to make retching a repercussion for failure.

The Witch and the Hundred Knight 2’s multitude of minor improvements add up, establishing a sequel that easily surpasses its predecessor. Thematically, it’s lighter than the first game, but you still are going to have witnessing the pursuits of a wicked protagonist, while you carry out most of the dirty work. No everyone’s going to be OK with it, but those with a virtual ax to grind will find an arsenal of catharsis within. 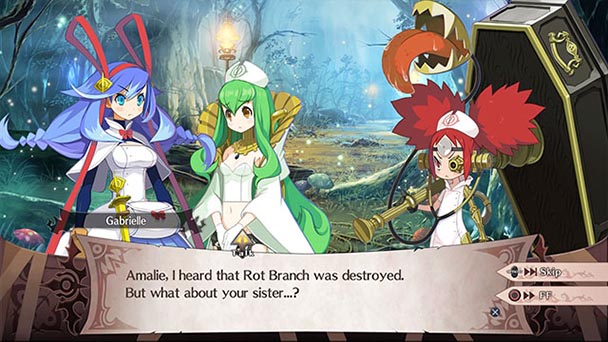 The Witch and the Hundred Knight 2 was played on the
PlayStation 4 with review code provided by the publisher.

The Witch and the Hundred Knight 2
Platform: PlayStation 4
Developer: Nippon Ichi Software
Publisher: NIS America
Release date: March 27th, 2018
Price: $49.99 via physical or PSN
ESRB: Teen
The Witch and the Hundred Knight 2 review
While many games might suffer a misfortune or two, 2014&rsquo;s The Witch and the Hundred Knight faced a perilous number of tribulations. Development of the title was anticipated to take a year and a half. But the team struggled with creating a visual appealing, action driven, three-dimensional title, delaying the release an additional year. Once the title was published, a bug sporadically disrupted play, dropping players to the PlayStation 3&rsquo;s system menu. The error undoubtedly didn&rsquo;t help review scores, but a protagonist who was unflinchingly meanspirited through most of the game also didn&rsquo;t sit well with critics. While the title&hellip;

Summary : Don’t let Takehito Harada’s charismatic artistry or Tenpei Sato’s angelic soundtrack fool you, The Witch and the Hundred Knight 2 is darkly humorous. But malevolence isn’t its only attribute- it’s also a solid action-RPG with a devilish amount of variety.