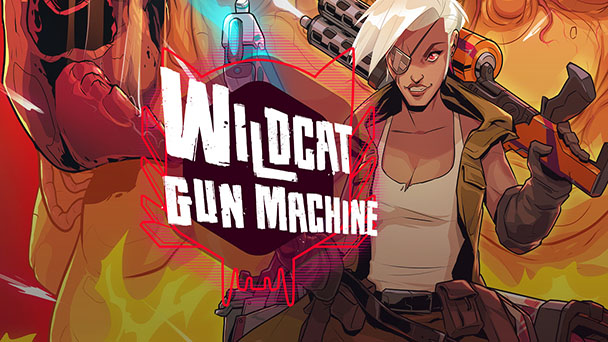 Wildcat Gun Machine’s tonality is as ridiculous as its title. Artwork shifts from ‘conceivably cute’ during gameplay to “serious” on the upgrade screen. Sometimes, you’re side-stepping bullets that look like pink bubbles. In other moments, you’re gathering bones from corpses. When applied to a run-of-the-mill, twin-stick shooter, there’s little reason to adopt this kitty. 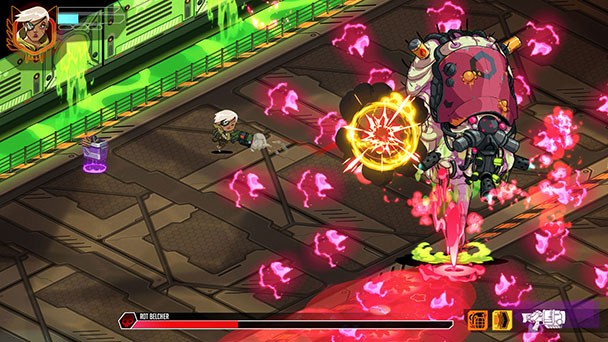 There’s face it, there’s a multitude of mediocre twin-stick shooters out there. Perhaps curiosity might have lured you toward eccentrically titled efforts like Genetic Disaster, Freakout: Calamity TV Show, Juicy Realm, NoReload Heroes, or Riddled Corpses EX. These games and their middling contemporaries all seem to offer only the basics of the genre.

Each title routinely sends you maneuvering through fields of enemy firepower, wearing down the seemingly endless succession of enemies with your own barrage of bullets. And maybe even an intermittent power-up or upgrade path provides a bit of novelty. 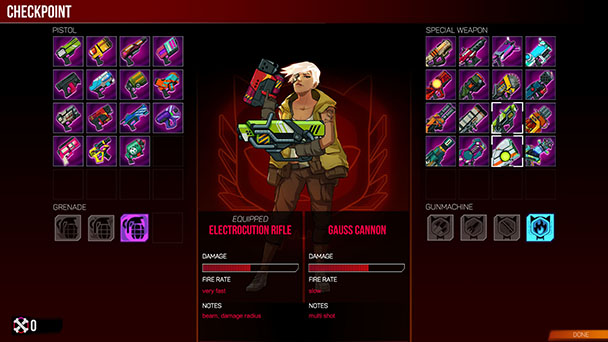 But arguably, tedium is a bigger threat than any on-screen adversary in these kinds of unaspiring outings. Occasionally, you’ll find yourself fighting the umpteenth wave and wondering if there’s any reason to continue this Sisyphean undertaking.

Adding to that list of functional, but unessential twin-stick shooters is Chunkybox Games’ Wildcat Gun Machine. Mostly devoid of plot and even context, you’re a nekomusume armed with two main guns that you can swap at any time. The first is your dependable, but upgradable pistol. It’s certainly not packing a lot of power, but the upside is unlimited ammo. Later, you’ll collect bones from corpses and trade those for enhancements like armor-piercing or homing ammo. 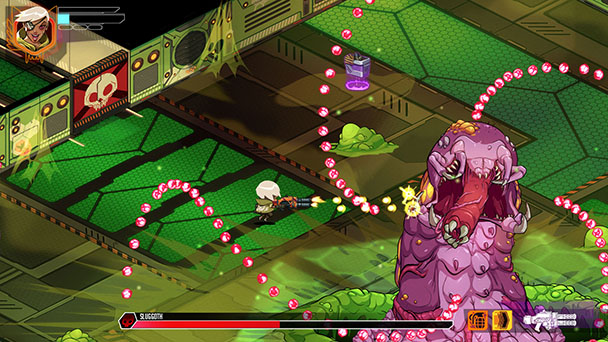 Throughout the game, you’ll pick up a selection of different secondary guns. These provide a bit more punch, providing perks like auto-fire or a projectile that fans out in multiple directions. But a finite amount of ammo for your secondary means you’ll regularly fall back and rely on your fundamental firearm. While boss zones typically provide you with an ample quantity of projectiles, you’ll get locked in rooms with more constrained supplies.

Eventually, you’ll earn two additional abilities tied to different cool-down meters. The dash allows Wildcat to sprint across playfields while the other gives players an upgradeable grenade that’s often useful for eliminating groups of foes. The final part of your arsenal is a Gun Machine ability. After filling up a gauge, you gain the ability to control one of four different tools of destruction.

Like Pac-Man first demonstrated, inverting the balance of power can make basic gameplay more interesting. Here, it’s useful, but also feels lamentably sterile. It would have been great to see a mechanic that permits players to slow the discharge of the Gun Machine by maintaining a killing combo. By like much of the game, it feels like Wildcat Gun Machine doesn’t have many creative ideas. 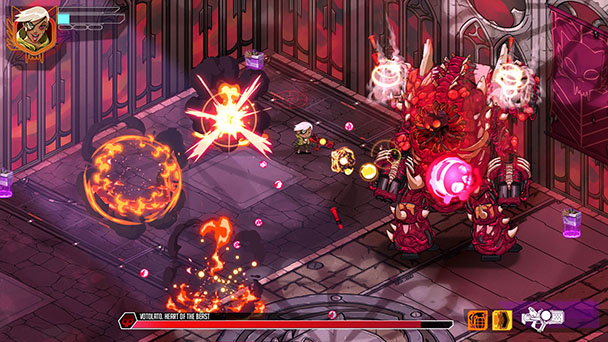 I Found the Key, But Where’s the Challenge?

Although not a roguelike, each of the game’s four acts evoke the feel of exploring generic, procedurally-generated maps. You’ll encounter needlessly labyrinthine levels where empty hallways lead to rooms that spawn waves of enemies. Color-coded keys tend to keep you to track toward new areas, but navigation is rather joyless.

Largely, combat is too. It’s responsive and serviceable, and you’ll be able to weave through the patterns of slow-moving enemy projectiles for a while. But about halfway through the game you’re finally spurred into taking of advance of the invincibility frames offered when dashing. As such, much of Wildcat Gun Machine’s trek won’t be challenging to genre fans. Exacerbating the issue is a lack of difficulty levels.

The other problem is that Wildcat grows tedious rather quickly. Waves are often too long, and only the late game really prods you into prioritizing your targets. The best twin-stick shooters use different combinations of enemies, who each following their own distinctive behaviors, requiring concentration from players. There’s a bit of that here, with enemies that rotate toward you, lock their angle, before angrily flinging themselves at you. But far more foes just gradually inch toward your position or spawn close to you. Even the game’s archetypical explosive barrels are too predictable, placed too far apart to kick off chaotic chain reactions. 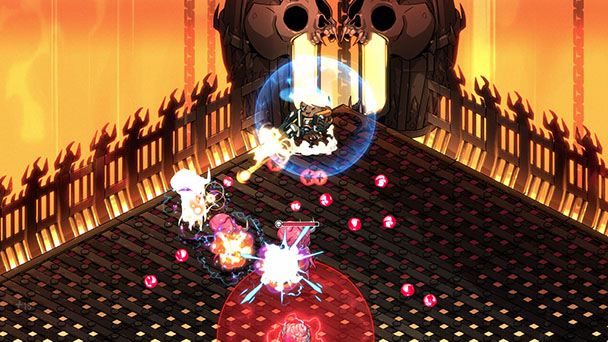 Every gaming platform released in the past twenty-five years probably already has a better twin-sticker shooter than Wildcat Gun Machine. Once you’re torn through all the top-tier experiences, Wildcat Gun Machine offers a rather unfulfilling trek. While the requisite foes, punishing bosses, and a standard supply of guns are here, innovation isn’t.

Wildcat Gun Machine review
Wildcat Gun Machine&rsquo;s tonality is as ridiculous as its title. Artwork shifts from &lsquo;conceivably cute&rsquo; during gameplay to &ldquo;serious&rdquo; on the upgrade screen. Sometimes, you&rsquo;re side-stepping bullets that look like pink bubbles. In other moments, you&rsquo;re gathering bones from corpses. When applied to a run-of-the-mill, twin-stick shooter, there&rsquo;s little reason to adopt this kitty. &nbsp; There&rsquo;s face it, there&rsquo;s&hellip;

Summary : Wildcat Gun Machine is tonally and artistically erratic, absent of narrative and originality, and only average as a twin-sticker shooter. Catgirl, you could be so much more.