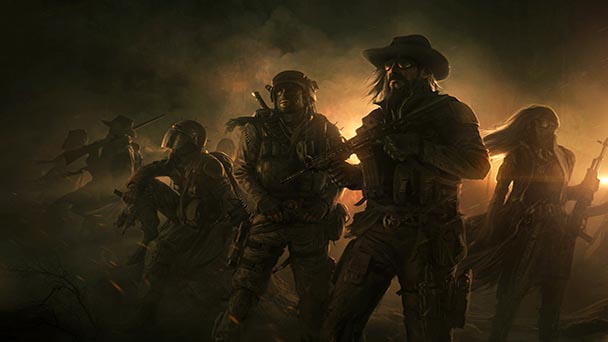 Life is full of unexpected twists and turns. Wasteland was originally created in a time when most PC RPGs consisted mostly of fantasy settings. Although the gameplay wasn’t far off from the party management and turn-based fare found in the Ultima games, its vast freedom and unique post-apocalyptic theme set it apart from the rest.

Eventually its team set out to create a sequel but lacked the rights to this series, thus, Fallout 1 and 2 were born. When the time came to create the third Fallout title, history repeated itself, the team once again no longer held the rights to this series. A Kickstarter campaign later, InXile Entertainment seeks to re-ignite that spark many gamers felt with the old turn-based, tough as nails formula. 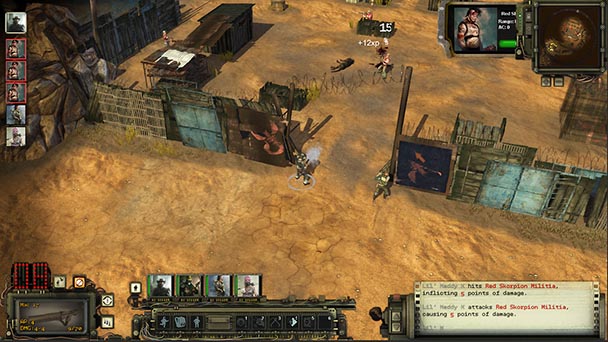 The story quickly introduces players to post-apocalyptic Arizona through a brilliantly executed live-action intro movie. It’s never explicitly revealed who or what caused the fallout (no pun intended), though we are given several hints as to when it happened in the form of late 80s and early 90s memorabilia. You can only find so many laserdiscs, floppy disks and Teddy Ruxpin bears before starting to put two and two together.

Between what remains of civilization and the constant famine, droughts, wild animals and raiders stand Arizona’s Desert Rangers. As the Rangers’ newest graduates, your team is tasked with discovering who murdered one of the group’s members and then carry on your mission in his stead. The main story itself isn’t too interesting and in some points, it gets downright silly. Instead, Wasteland 2’s narrative strongpoints lie with its writing, characters and world exploration. 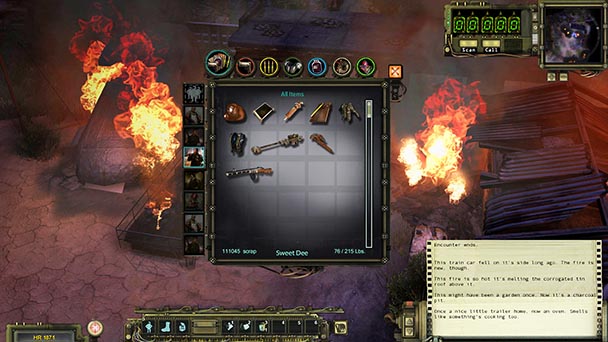 Every location and character features lengthy text descriptions and introductions complementing the graphical style. These range from dark and serious to light and humorous but all of them perform an admirable job at immersing the player into the world.

In one particular quest I was tasked prompted with an uncomfortable choice, either save the local agricultural center responsible for feeding the region or a town which supplies Arizona with water. It was a true no-win situation as the further you progressed in saving one place the more you’d hear about how everyone in the other was slowly getting killed. In the end I ensured everyone would have enough to eat, but by the time I reached the other town, everyone was gone. It made me feel truly guilty and realize how truly great the writing in Wasteland 2 is. 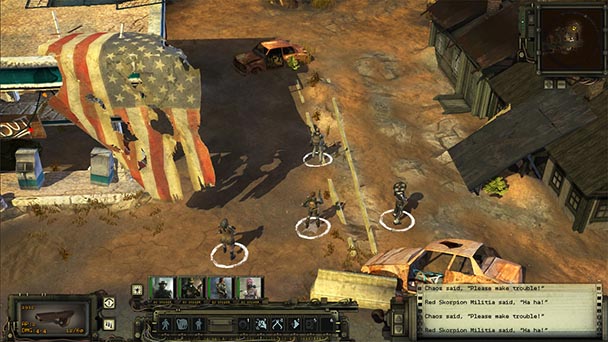 When setting up the initial party, you can either use pre-made characters or create your own. With so many attributes and skills to choose from this process can be initially daunting for newcomers, especially if you don’t know which or when you should use or what sort of overlap they carry. This holds especially true for “surgeon” and “field medic”. No matter the party structure it likely will not have the correct skill-set for every situation. Luckily, you meet and convince other characters to join your cause, filling the gaps. This is especially useful when considering perma-death is a very real danger in Wasteland 2. Players who don’t plan out their moves will soon find their ranks seriously reduced.

Combat is handled in a tactical, turn-based fashion. Distance, obstacles, ground elevation and whether or not your character is crouching play a role in aim and defense. Every action consumes a certain amount of action-points, as a result, every movement and attack must be planned out carefully. There are several weapon types your characters can use provided they’re trained to use them with each featuring disparate values in aim, range, power, action-point consumption. To further increase the difficulty and strategic aspect of combat, players must also watch out for friendly fire and ammo depletion. In fact, Wasteland 2 is one of the few games where I found myself holding bullets as a more valuable commodity than money or even experience points. Conserving ammunition should be a high priority as not many vendors sell the type you’ll need and that’s when they have any at all. Of course, you can use melee weapons to save up on ammo, though that also requires training and skill points are a valuable commodity. 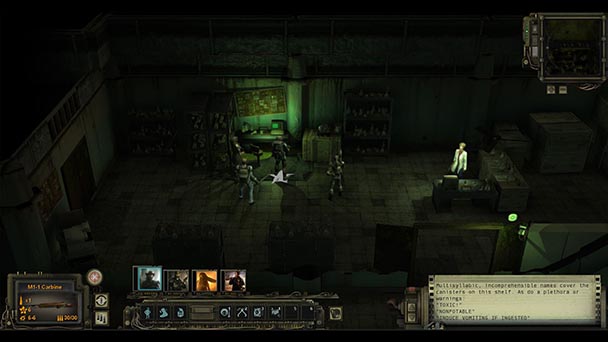 When visiting a city, town or any other location you’ll run into foes amidst their patrols. Battle will only engage when they find anyone from the main party, making it possible to split up your characters and set up ambushes or outright avoid them altogether.

Outside of battles, most locales feature a plethora of NPCs, quests and loot to explore. Players who are unfamiliar with the Wasteland or early Fallout series should approach these as they do with most Dungeons & Dragons RPGs. Having a character qualified in lock picking and trap disarming is near-mandatory as well as having a fast talker or someone capable of threatening others can also be of help. Finally, it’s also recommended that one of them knows how to hack computers. 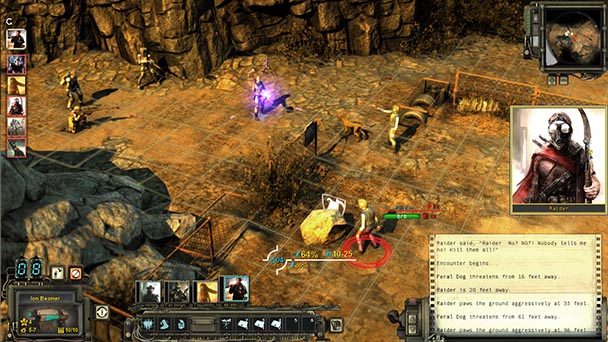 When exploring the world, the party is represented through a pin on a map. Here, you slowly travel from point A to point B, bearing in mind that in this instance movement consumes water. You can stop at an oasis or an otherwise landmark with a well to refill your canteens though I felt this process punishes the player for trailing off of the beaten path and exploring on his own. Not only that but I occasionally ran into sub-quests or locations which I was simply not supposed to go yet, when a handful of honey badgers are killing your entire party in a couple of turns you know you’ll need to do some serious grinding first. Random encounters are also in effect while traversing Arizona, if the party is planning on running away it’ll need a character with the correct skill-set.

Wasteland 2 is not a graphical powerhouse by any stretch of imagination, but it features an art style that perfectly sets the tone for a post-apocalyptic experience. This mood even extends to the HUD which features buttons and a look worthy of 80’s computers, it even has a fax machine as the dialogue log. Sadly, said HUD also requires some getting used to, for the first few hours of the game I didn’t even realize there was an option to control each squad-member individually. 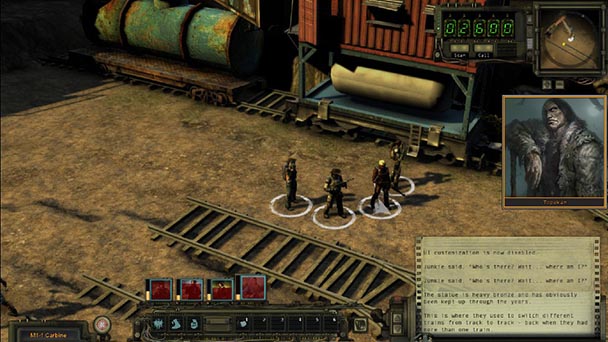 Although the isometric perspective allows players to survey the situation from a bird’s eye view, the angle can make it hard to discern chests, doors or important quest objects.

There is no doubt in my mind Wasteland 2 is a love letter to the CRPGs of old. Players who grew up Ultima or SSI’s Goldbox series will likely find themselves at home and even welcome the formula updates it implements. Newcomers might be thrown off at first by some of the game’s adherence to old gameplay tropes, namely the text-heavy interface and high difficulty, but those that look beyond it will find a deep and rewarding RPG with smart writing and enough content to keep them busy for multiple playthroughs.

Wasteland 2 was played on the PC with review code provided by the publisher.

Wasteland 2
Platform: PC
Developer: inXile Entertainment
Publisher:  inXile Entertainment
Release date: September 18th
Price: 39.99 Classic, $59.99 Deluxe Digitial Edition
Language(s): English voice/English, French, German, Spanish, Polish, or Russian, text
Wasteland 2 review
Life is full of unexpected twists and turns. Wasteland was originally created in a time when most PC RPGs consisted mostly of fantasy settings. Although the gameplay wasn&rsquo;t far off from the party management and turn-based fare found in the Ultima games, its vast freedom and unique post-apocalyptic theme set it apart from the rest. Eventually its team set out to create a sequel but lacked the rights to this series, thus, Fallout 1 and 2 were born. When the time came to create the third Fallout title, history repeated itself, the team once again no longer held the rights&hellip;

Summary : With its brilliant writing, characters, an engaging world and a tough-as-nails strategic combat, Wasteland 2 is everything it set out to be; a love letter to old-school computer RPG gamers and a perfect introduction of the genre to newcomers.