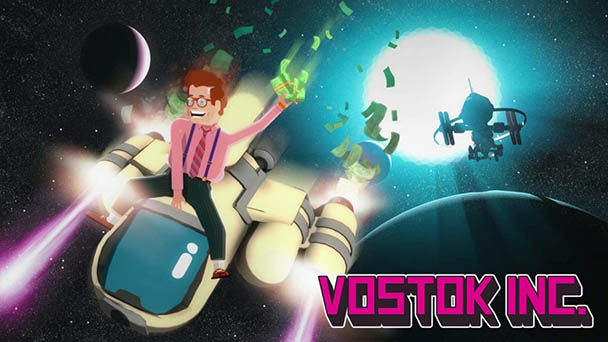 The ‘clicker’ genre is poised to create a love/hate relationship with players. Undeniably, there’s fulfilment in the continuous accumulation of wealth and the pleasure in increasing your earnings rate. But all too often, you are forced to perform simple tasks to escalate your earnings, which can make a clicker game feel monotonous. And then there’s the disheartening realization that as you make more money, the next tier of investments become proportionately more expensive. Before long, the entire ruse is revealed, and you’ll probably realize it’s all ingeniously designed to devour recreational hours.

And while the recent release of Vostok Inc. still might produce a sense of remorse, especially during it’s early hours, the title also incorporates mechanics that elevates the title over fellow clickers. While the title’s twin-stick-based shooting mechanics won’t win over the adrenaline-addicts looking for the next Geometry Wars or Nex Machina, they do keep Vostok from feeling like a vapid diversion. 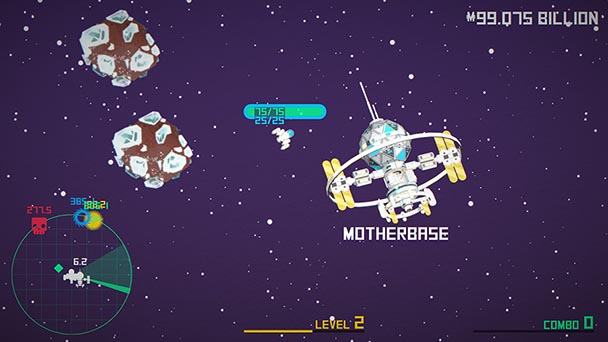 Sporting ‘80s business attire and horn rim glasses, your journey through Vostok Inc. will be guided by a talkative space-yuppie named Jimmy. While Wall Street’s Gordon Gekko might mock his casual loafers, the character would adore his unwavering pursuit of wealth and his capitalistic ideologies. While he’ll instruct you on the basics on ship control and weapon usage, his lessons won’t explain every detail, pushing you to explore and learn the behaviors that will keep you alive and more importantly- increase the rate of money coming in. Most interesting, Jimmy isn’t one to initiate conflict, but if it does break out, he’s all too happy to profit on it. As the newly appointed CEO of Vostok Inc, you’ll probably be a little more aggressive than your fat-cat instructor.

Your first hour with Vostok can feel a bit tedious, as you use a utilitarian gun to bust up space rocks and collect the gold ‘moola’ found inside. Regularly, enemies will descend on your position. and if you’re able to defeat them, their demolished ships contribute to your coffers. Sporadically, these confrontations will lock the scrolling screen in place, with showdowns ending with a punishing beatdown or a large collection of moola to collect. 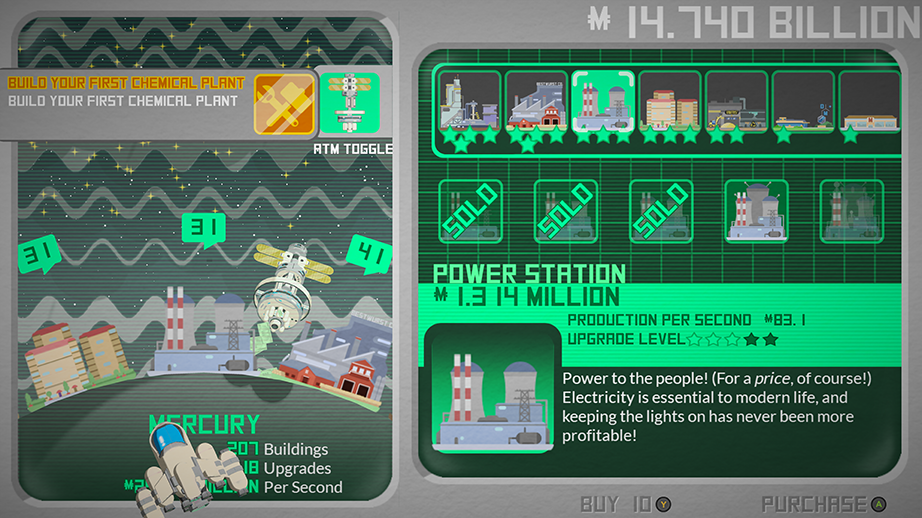 Fortunately, your craft has a number of systems to support your safety. A renewing energy system can be used to boost away from danger and can also absorb hits before permanent deductions are made to the stability of your hull. And when you craft is completely compromised, you are given a second chance via an escape shuttle. Although it’s fragile, it’s also fast and able to get you back to the mothercraft where you’re given a replacement craft free of charge.

Inevitably, you’ll grow weary of the meager profits associated with mining and mauling. Landing on a planet allows players to invest their moola into housing and production facilities, which follow clicker policies, producing a constant revenue stream. At first the output is trivial, but as you increase your investment, the slow trickle of cash grows exponentially faster. Soon, you’ll be shuttling between planets in our solar system, laying down the foundation for galactic domination. 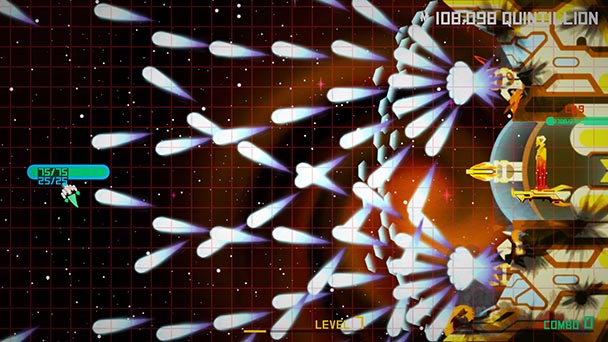 At this point, you’ll discover that Vostok make a much-needed break from form. Different industries don’t just cost more money but have certain requirements attached to them, forcing players to build on, say, ten planets before residential housing can be constructed. Dovetailing with the drip-feed of development are hundreds of in-game achievements which reward players for tasks like killing thousands of enemies or boosting for ten minutes. Undoubtedly, Jimmy is doing a lot of a record-keeping behind the scenes.

Soon you’ll be battling bosses, travelling through wormholes to different solar systems, rescuing executives, playing thirteen different mini-games that draw inspiration from retro recreations, and even doing some Tamagotchi-like nurturing. Venture into the trio of upgrades screens and there’s an abundant amount of improvements you can make to your ship, scanning system, and weapons. And largely it all work, because you’re not just clicking mindlessly, but eliminating ever-more powerful enemies and annihilating clusters of asteroids with weapons that fill the screen with hit-point shattering potential. 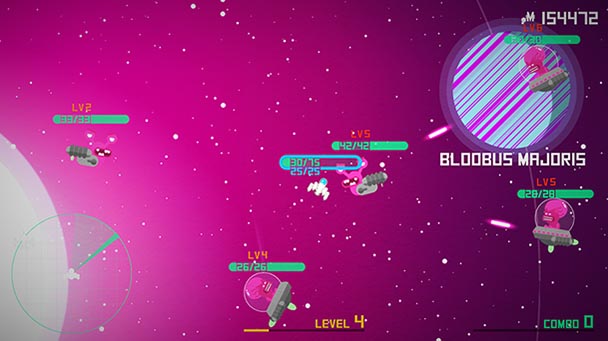 On the undocked Switch, this happens without a nary an instance of slowdown, even when there are enough on-screen projectiles to rival a bullet-hell shooter. Sure, the Joy-Cons aren’t the best for making a micro-adjustment to the rotation of a laser, but they get the job done. And if they don’t, a Pro Controller helps to give pin-point precision, allowing you to sear a salvo of homing missiles headed for your tailpipe. While Vostok Inc’s visuals are simple, with most units built from basic geometric shapes, the technique helps keep the framerate high and the on-screen chaos controllable.

Vostok Inc. fixes the core drawback with the clicker, incorporating gameplay that more involved than the mindless action associated with the genre. Here’s a game that rewards your investment with on-screen weapons that illuminate the screen with sizzling lasers and brilliant exhaust trails. More importantly these arms are essential when the game’s boss battles occur, giving way to showdowns that are an equitable return for your investment in time. 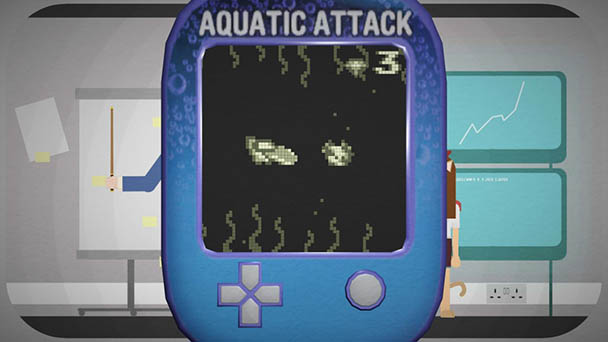 Vostok Inc. was played on the Nintendo Switch with review code provided by the publisher.

Vostok Inc.
Platform: Nintendo Switch, previously on PS4, Xbox One, and PC
Developer: Nosebleed Interactive
Publisher: Wired Productions
Release Date: December 7th, 2017
Price: $14.99 via Nintendo eShop
Difficulty: Easy to Moderate
Vostok Inc. review
The &lsquo;clicker&rsquo; genre is poised to create a love/hate relationship with players. Undeniably, there&rsquo;s fulfilment in the continuous accumulation of wealth and the pleasure in increasing your earnings rate. But all too often, you are forced to perform simple tasks to escalate your earnings, which can make a clicker game feel monotonous. And then there&rsquo;s the disheartening realization that as you make more money, the next tier of investments become proportionately more expensive. Before long, the entire ruse is revealed, and you&rsquo;ll probably realize it&rsquo;s all ingeniously designed to devour recreational hours. And while the recent release of Vostok Inc.&hellip;

Summary : While is adequate as a twin-stick shooter, the process of earning and spending currency for new systems and weapons makes this interstellar journey worthwhile.