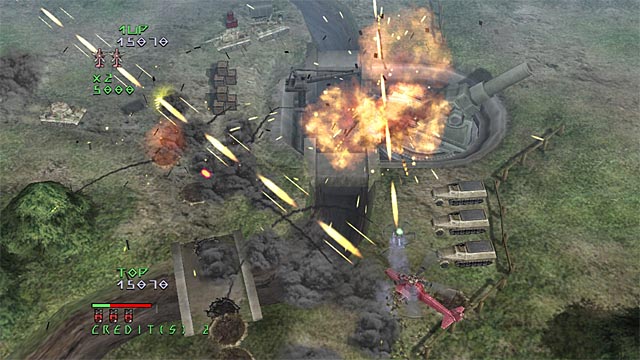 Despite an ever-shrinking amount of physical space as well as a dwindling number of television inputs, a Dreamcast remains a permanent fixture in the office. The reason for its enduring residency is simple: the console plays home to some of the best shmups around. From cherished fan favorites like Ikaruga and Zero Gunner 2 to beloved bullet hell blasters such as Chaos Field, and even personal favorite- Bangai-O, shooters are both adept and abundant on SEGA’s system.

Released in 2006, amidst the Dreamcast’s waning days and once purposed to be the console’s final game (Gunlord now holds the title), Under Defeat has garnered a remarkable amount of attention since its inception in arcades. Beyond the provocative perspective where German-speaking protagonists are pitted against an antagonistic group of English-tongued allies, the game also became notable for its distinctive input scheme. With the digital and Blu-ray release of Under Defeat HD, both of those contentious elements have been tweaked. 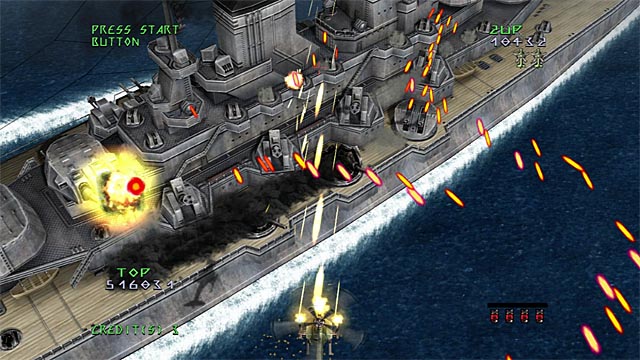 For American audiences, the references to Nazism have been diluted. Although post-stage stills still show manga-styled pilots clad in Third Reich-like gear, the voices of each faction have been buried in the sound mix, notably the P.A. alert which accompanies the beginning of the second stage. It’s a small change which maintains the integrity of the port, while not offending the sensibilities of its audience.

A much larger modification is offered to Under Defeat’s control method. The original arcade game allowed the player’s helicopter to fire in three directions: vertically, as well as slightly to the left and right. Players could choose the angle of attack while the copter was moving- while holding down the fire button locked the craft’s bearing. For players accustomed to the typical unidirectional shmup, the first few plays of Under Defeat likely lived up to the game’s moniker. But following a few incursions, players will learn to simultaneously dodge enemy projectiles, while using the system to exploit a wider field of fire. For the port of Under Defeat HD, players may even employ a dual stick approach- using the right analog nub to direct their barrage of ballistics. In execution, it’s a competent option which tempers the game’s difficulty. 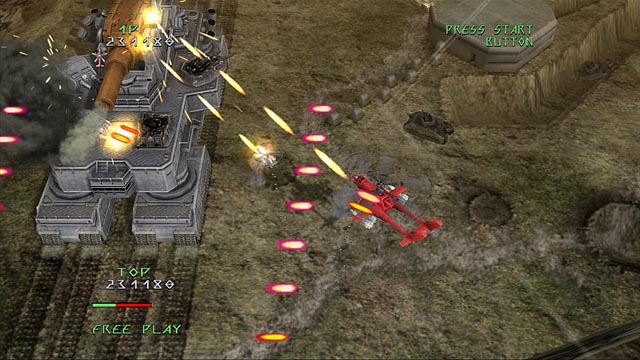 The game’s other distinction is the supplement of a single ‘option’ which increases the player’s firepower. Occasionally, downed adversaries will reveal a power-up. Shirking tradition, these floating icons don’t augment the main weapon, but rather extend three different AI routines for the player’s drone. Balancing power, reload time, and the ability to identify ground and air-based foes, each is instrumental is the assault against the game’s more formidable opponents. Naturally, options can’t be utilized continuously; their deployment is tied to both a cool-down timer and nerve-racking intervals where players have to lay off the fire button. Like any respectable shmup, this risk/reward trade-off persistently needles players to use an amplified attack now, or to hold off and use the advantage against the imminent, elevated foe. Rounding out the players’ arsenal are bombs- last ditch efforts which clear the screen of enemy projectiles and exact heavily damage on fortified adversaries.

Purchasing Under Defeat HD provides two variants. Purists will relish the game’s original arcade port, which recreates the 4:3 ratio of the Japanese coin-op. Pleasingly, players may rotate the screen orientation to enjoy Defeat in its unadulterated tate form (providing they have a rotating monitor). Those without such a luxury may adjust nuances such as overscan, playfield position, and border wallpaper. True to its arcade root, this version forgoes the interactive score calculations which take place of the side of the screen in the Dreamcast iteration. 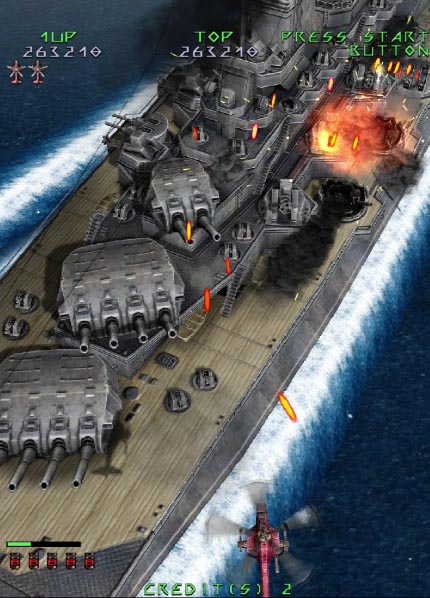 The title’s other component is New Order mode, which extends a true 16:9 widescreen playfield. To accommodate the ratio enough environmental elements have been modified to make this deviation feel like a true remix of the original game. Similarly, the game’s energetic soundtrack was given revision- although the option to play with the original music would have been welcome. Regretfully, both the versions are marred by bits of nasty slowdown, with the release of a bomb bringing the game to a stuttering crawl. Although some shmuppies are known to embrace the sporadic bit of slowdown, which can make navigating through bullet curtains a bit more manageable, Under Defeat’s framerate is just irregular enough to impair precision. Likewise, an enlarged hitbox on the player’s helicopter can add a bit of frustration.

The Blu-ray release of Under Defeat is marketed as the game’s deluxe edition, containing three additional DLC additional which vary the player’s offensive output. Additionally, the package includes seven audio tracks, and a 32 page PDF-format artbook placed on a separate CD. Considering that this Amazon-exclusive version is the same price as the digital download, this is the iteration that collector’s will want to acquire. 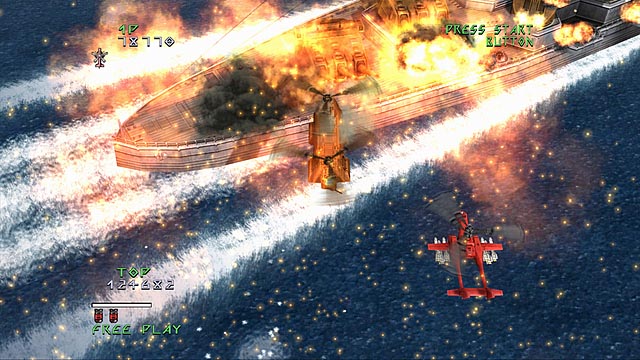 Save for some bits of unsightly and uncooperative slowdown, Under Defeat HD is an engaging shmup rooted in Toaplan legacy. Elevated by a distinguishing control method and power-up mechanic which resists convolution, the game’s virtues ultimately overpower its blemishes. Considering publisher Rising Star Games is providing players with an actual disk-based release (as they did with last summer’s Akai Katana) genre fans may to consider supporting the company. Ideally, the release of a few more capable shoot-‘em-ups just might be the stimulus needed to finally retire those dog-tired Dreamcasts.

Previous: Podcast 11-9: Dead and Loving It
Next: Natsume’s Book of Friends Review