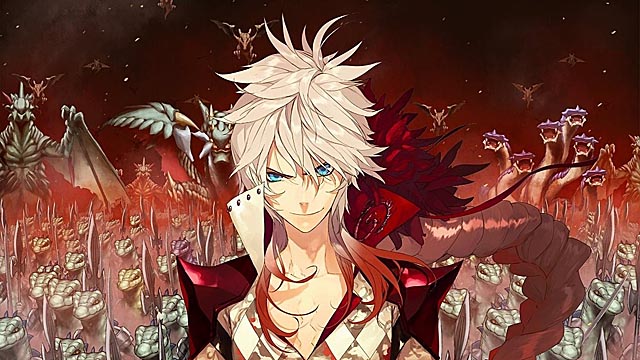 Last year’s release of Wizardry: Labyrinth of Lost Souls hoped to revitalize the dungeon crawler on Western shores. Regretfully, the game’s sharp learning curve and utilitarian visuals likely did the genre a disservice. With the stateside release of Unchained Blades, a download-only PSP title, publisher XSEED is aiming to correct these transgressions. By combining a capable combat system, item crafting, as well as Pokémon-like collection and cultivation, the game’s variety of mechanics meld into a synergetic, satisfying amalgam. Fans of quirky, lighthearted Japanese fare are bound to get ensnared by Unchained’s charms.

The game’s prologue introduces players to Fang, a delightfully impetuous dragon who has battled his way to the goddess Clunea’s shrine. Traditionally, any conqueror that makes their way to the temple is granted a single wish. Yet Fang’s disrespect and boorish insistence in knowing the name of the realm’s mightiest warrior infuriates the deity. Troubled that a fighter so ferocious could also be so loutish, Clunea returns Fang to a fledgling state, before casting him away. Naturally, the dragon is hellbent on revenge, endowing Unchained Blades with a simple and effective premise. Like the Wizard of Oz, the protagonist’s path puts him in contact with allies who have a single, unambiguous character flaw. While the Golem’s lack of courage or the Medusa’s dread of men to stone are diverting, the game’s side characters aren’t as absorbing as the comically crass lead. As such, the game’s secondaries are obliged to rely on time-honored tropes such as the well-endowed alchemist, which will doubtlessly delight genre devotees. 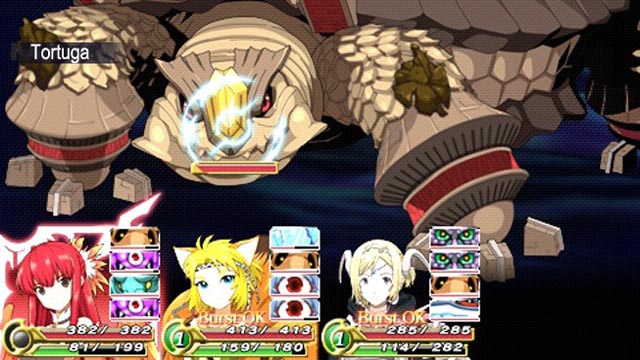 Although Unchained offers more narrative heft than the average dungeon crawl, players will still spend a majority of their time skulking the game’s well-drawn hallways. Utilizing both an auto-map feature as well as a blinking indicator which reveals the locations of resource deposits, moving through the game’s passages endows the game’s environments with a spatial plausibility absent from most top-down role-playing games. The title’s one blemish is the overuse of locales. With only eight dungeons in addition to an introductory temple, players spend a bit too much time in each milieu. Between the fetch and extermination quests, Unchained Blades’ occasionally forgets to indulge the passions of enthusiastic cartographers.

Mercifully, the game’s brisk turn-based combat keeps players from dwelling on any returns to well-traveled dungeons. Random encounters present clashes with up to four masters- each supported by up to four collected (or ‘unchained’) followers. Beyond the prototypical attack, magic, and defense options, battles are made more interesting by the incorporation of your henchlings, who can absorb damage or even issue up supplemental strikes. Not only do players have to manage the growth of their main characters on a network of nodes recalling Final Fantasy X’s Sphere Grids, but they are encouraged to develop a bond with their creatures to improve their battle stats. 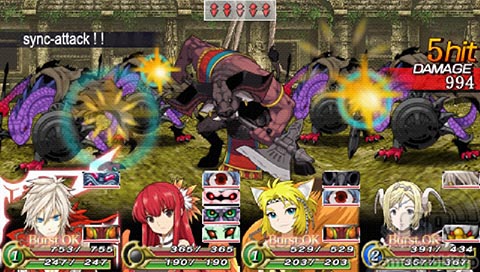 Following fracases, the assistants often seek validation through a question- with responses helping or harming the rapport with your creatures. Since the queries repeat, success is dependent on memorizing the proper retort. Periodically, elevated encounters send your entire entourage into a rhythm game dual against a foe, with the collective power of your subordinates matched against a stream of rival counterparts. While these sequences aren’t very deep, they are comical to watch, as the minions attack ferociously, before tumbling out of battle.

Besides offering rejuvenation at the local inn and the requisite stockpile of weapons, armor, and sundries, Unchained’s towns also offer the ability to craft a variety of items. Yet, whether players comb the game’s catacombs for minerals or amass currency from defeated monsters, the game still obliges grinding. While Unchained Blades’ difficulty level is rarely overwhelming, the title’s low payout of experience and loot means that the adventuring party and their underlings level up relatively slowly. Fortunately, the game’s wealth of mechanics offer a compelling distraction, dissuading players from agonizing over the frequent trips to the nearest healing center during the title’s introductory hours. 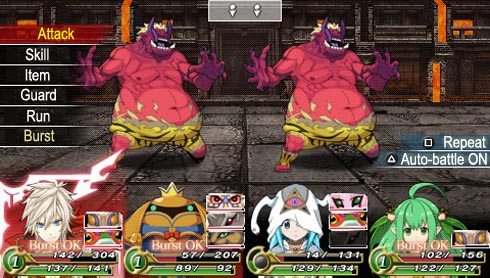 With the game’s thirteen core characters each designed by a different anime and manga artists, Unchained could have easily devolved into unsightly visual bricolage. Conveniently, the game’s character portraits are limited in size and scope to prohibit this from happening, allowing the game’s dungeons to be the focal point. Sonically, Nobuo Uematsu and Tsutomo Narita’s post-battle fanfares and adventuring interludes will delight the ears, while Troy Baker and Yuri Lowenthal’s voice over work is commendable.

With an emphasis on dungeon prowling and amassing a formidable posse of beasts, Unchained Blades’ components help conceal the game’s archetypical JRPG tenets. Bolstered by a story which doesn’t take its self too seriously, the game’s clever combination of mechanics gel into a gratifying adventure which should please all but the most grind-weary adventurers. 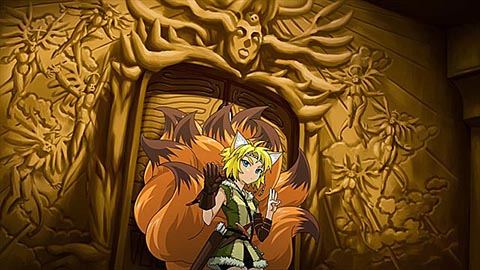