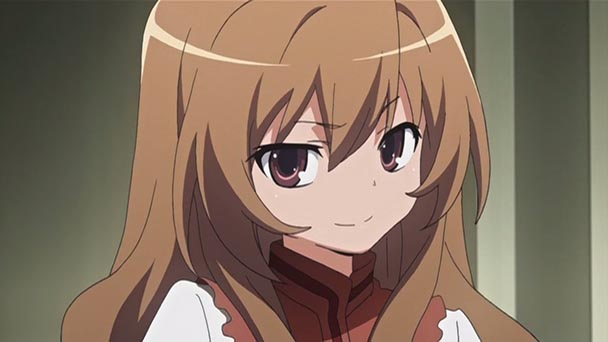 As the overabundance of police procedurals and supernatural-themed teen lit have demonstrated in the West, a single success can spur an upsurge of copycats. Naturally, anime follows an equivalent route, with depictions of high-school romance just as ubiquitous as depictions of misanthropic investigators or post-pubescent vampires. But occasionally, both mediums produce the exceptional program which transcends the tenets of the genre- offering enough verve to conceivably instigate their own swarm of imitators.

Based upon a series of light novels authored by Yuyuko Takemiya, 2008’s adaptation of Toradora! was one of those rare anime which toyed with tradition, transforming what appeared to be a trope-filed plotline into a work with ended up contending with convention. This subtle struggle obviously wasn’t missed by viewers, beyond being able to stream the 25-episode series on Crunchyroll and Hulu, its popularity was strong enough to stimulate two seasons of standard and premium editions from NIS America. Most recently, the publisher has constructed a third iteration- a definitive collection of the entire series which not only includes a previously unbundled OVA but offers an English voice dubbing to complement the original Japanese voiceover. While the compilations $104 price tag might deter both casual fans and owners of previous released versions, this recently released Premium Edition is likely a requisite purchase for Toradora!’s fervent fanbase. After a secondary viewing of this new collection, it’s easy to see why the anime has amassed such a devoted following. 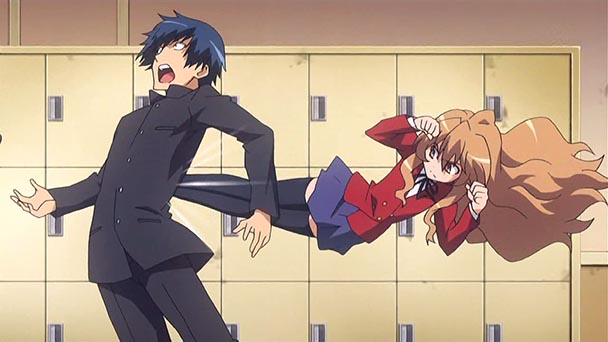 The opening episode introduces viewers to Toradora!’s congruent characters. Despite his menacing eyes which make most of his classmates think he’s a delinquent, Ryuji Takasu is a likable seventeen year-old. Beyond his off-putting appearance, he’s quite studious, obedient, and particularly adept at household chores. Ryuji’s classmate Taiga Aisaka has a similarly deceiving appearance. While her diminutive stature and youthfulness might make her look like a timid little girl, Taiga is anything but docile- with a wild temper that has earned her the nickname of the “palm-top tiger” as well as the fear of the student body.

This divergence between appearance and demeanor provides an impetus for Ryuji and Taiga’s early friendship- and later the shared quandary leads to the duo’s formation of a matchmaking plan. Each agrees to help the other earn the attention of another- resulting in an expected sequence of amusing misunderstandings and embarrassing situations. Unsurprisingly, the mutual scheming has a noteworthy side-effect, with the time Ryuji and Taiga spend strategizing ending up pulling the pair closer together. In concept, Toradora!’s premise sounds comparable to the antics of a myriad of other relationship-driven anime. But a few episodes in, the series shows a significant departure from the genre. 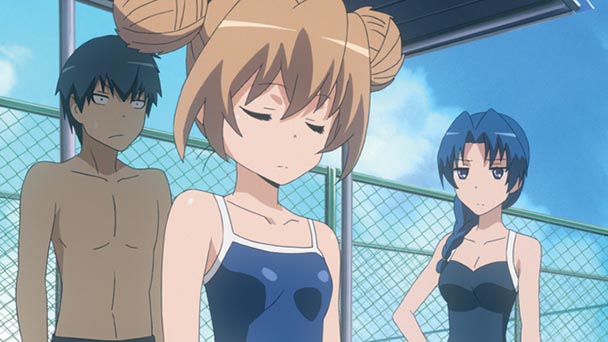 Across the anime’s two season span, Ryuji and Taiga’s relationship evolves from juvenile companionship to a thoughtful type of tenderness that’s seldom represented in the medium. Here, we see more than just the initial phases of attraction, as we observe the couple tackle the much more challenging tests which are mark the union of young adult lives. Concurrently, we also watch the two protagonists grow as characters, discovering the foundation of their individual personalities as family members play a large part of Toradora!’s plotline. Although the anime’s journey is consistently pleasing there are a handful of moments that might break J.C. Staff’s otherwise enchanting experience. Most stem from the writers trying to force character development too quickly; the most vexing comes from Toradora!’s rush to achieve closure at the end of the second season. Ideally, viewers would have been given more time to ponder the fate of Ryuji and Taiga’s future. Of course, the decision might have sprung from the choice to include concise pieces of poignant dialog. Toradora! is at its best when a short utterance resonates its way well into the next scene.

For anime aficionados, dubbed voiceovers are a habitually point of contention. Mercifully, the Premium Edition of Toradora! includes both the original Japanese voice work (with hardcoded subtitles) as well as the new English language localization. As for as dubbing efforts go, NIS American’s efforts are commendable, with the team hiring a roster of well-known, proven talent. Taiga’s tempestuous personality needs an actor with range. Fortunately, Cassandra Lee Morris (Puella Magi Madoka Magica, Atelier Totori: The Adventurer of Arland) offers a commendable reading, capturing the character’s outbursts with the proper tone and level of enthusiasm.  Elsewhere, Erik Scott Kimerer provides a proficient rendition of Ryuji’s interchanges, effectively expressing the uncertainty of the character. 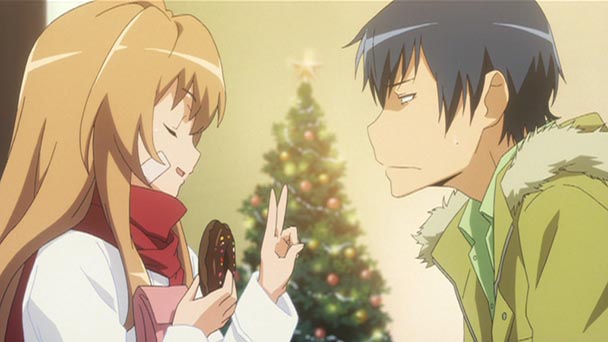 Both language options also extend to the compilations’ entertaining OVA and chibi-themed mini-episodes. “Bento Battle” is an extremely humorous twenty-six minute diversion in which Ryuji attempts to outshine the culinary crafts made by his best friend’s grandmother. While it forgoes the character developer found in Toradora!’s core story arc,fans will undoubtedly revel in the OVA’s steady stream of comical proceedings. The food motif continues through “Hurray for Foodies” quartet of story animations, which follow the cast’s gastronomical expeditions in short bits which parody public service announcements.

While the 68-page hardcover book which ships with Toradora!’s Premium Edition could have easily recycled content from the two previously released collections, NIS America conscientiously crafted a new supplement. Beyond interviews with director Tatsuyuki Nagai and Yuyuko Takemiya, there’s also an overview of the OVA and charts showing the knotty web of relationships in the anime. Undoubtedly, the component bound to please devotees is the fan-service artistry which put the Toradora!’s female protagonists in a number of faintly provocative poses. 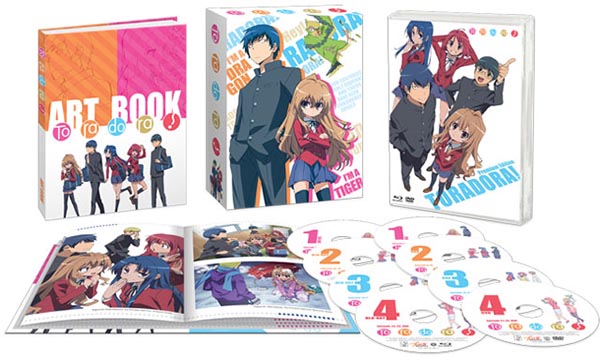 Unlike NISA’s previous premium editions, the release of Toradora! The Complete Series shirks the oversized cardboard housing, enclosing the set in a box that’s closer to the size of a DVD/Blu-ray case. Inside, purchasers will find the entire series on both media formats, thoughtfully arranged in a format which balances space with disk safety. Typical of the publisher’s releases, picture and sound quality across both formats is flawless, with skippable coming attractions creating an iota of irritation.

Although the Premium Edition of Toradora! The Complete Series arrived with an elevated MSRP, the inclusion of new material and a competent English dub makes this the definitive edition. But before taking the plunge, newcomers might want to stream a few episodes to see if the anime is to their liking. For fans of the genre, adoration seems poised to develop, much like the tenderness demonstrated by the anime’s two main characters.