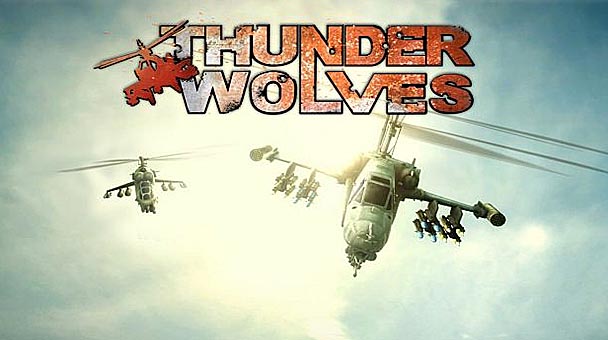 What is the concept? During the heyday of coin-ops, there was little need for narrative. Instead, arcade proprietors sought cabinets which would elicit adrenaline-emitting reactions, thereby earning a steady stream of revenue. The inclusion of any kind of extended story would just slow down the whole quarter-consuming process. Yet, as games moved from dingy public places to domestic ones, plotlines became expanded and the industry moved away from concentrated blasts of unfiltered euphoria. The recent PC, Xbox 360, and now PlayStation 3 release of Thunder Wolves teleports players back to that departed era of action-packed thrill rides. Combining the kinetic exhilaration of SEGA classics Afterburner or Space Harrier with the wanton destruction of the EA’s Strike series, the title is a volatile powder keg packed with cheesy dialog, unlimited ammo, and a searing metal soundtrack.

Each missions starts with the selection of a helicopter from the player’s squadron of nine death-dealers. Thunder Wolves’ control scheme recalls the handling of a simplified RC copter- with the left analog stick directing movement, while the right stick handles reticule aiming. Altitude is adjusted by pressing in the L3 or R3 buttons to raise or lower your elevation. In keeping the game’s arcade roots, each helicopter’s ceiling is artificially low, ensuring players are in constant danger. Although players don’t have to worry about pitch (vertical rotation), Thunder Wolves’ aircraft do exhibit momentum, making maneuvering through caverns and structures a bit unwieldy. Fortunately, any damage incurred is automatically repaired, making it nearly impossible to scuttle your helicopter on the title’s environments. 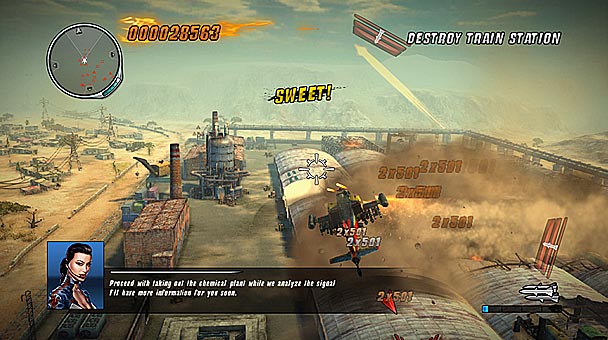 While maneuverability plays a crucial role in the game’s boss fights, your arsenal is the stimulus for success against the game’s plentiful pedestrian foes. Beyond a front-mounted chain gun, players have access to fire-and-forget rockets, lock-on and gamer-guided missiles. Periodically, players are enlisted for door gunner duty or to pilot a drone, firing at targets during on-rails shooting segments. Defensively, players can issue flares to confound incoming enemy missiles.

What are the game’s strengths? Throughout Thunder Wolves’ sortie of thirteen missions, there’s a nice selection of locales and objectives to help often the tedium of shooting. From underground bases, beaches, deserts, and factories levels offer visual distinction and a pleasing variety of enemy types. From opposing copters, missile batteries, tanks, and ground troops, adversaries vary in manner and menace, compelling players to prioritize their targets. Periodically, the game abandons the cockpit, putting gamers in tanks or submarines or behind the scope of a sniper rifle. While these set pieces lack the freedom of the main game, they do provide a dose of diversity during the four hour, thirteen-mission campaign. 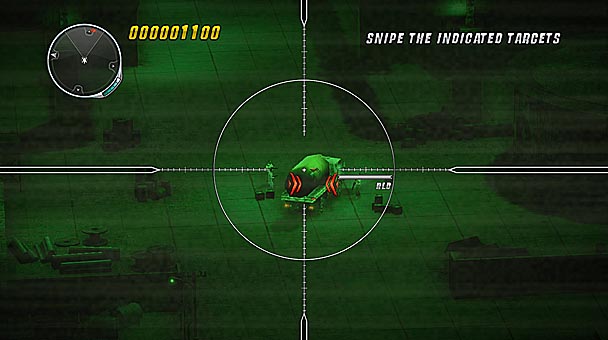 Adeptly, developer Most Wanted Studios understands how gratifying gratuitous collateral damage can be. Although demolishing innocuous building and vehicles doesn’t add to the players score, the design decision to make most environmental elements destructible contributes to Thunder Wolves’ trigger-happy vibe. Periodically, the game will place adversaries atop of giant oil drums, goading gamers to generate a succession of screen-filled fireballs. It’s during these moments that Thunder Wolves’ shines, as players leave cities in smoldering shambles.

Unlike many of the arcade games that inspired Thunder Wolves, there is a bit of a storyline to motivate the mayhem. Mostly told through situation reports articulated during loading sequences and testosterone-fueled radio chatter, the game shirks seriousness, offering conversations filled with coarse language and delightfully cheesy one-liners. Surprisingly, the voice acting is competent, although it occasionally gets buried in the explosive and firepower-laden sound mix. 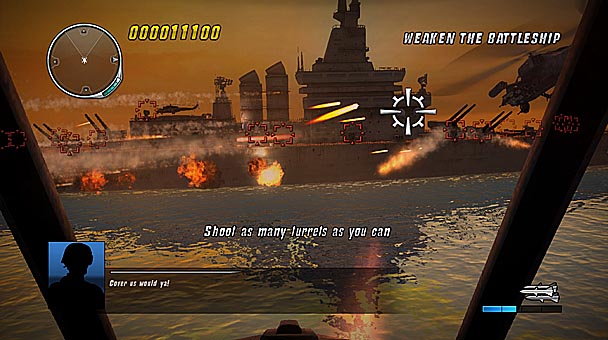 What are the game’s weaknesses? Visually, Thunder Wolves’ is a mixed bag. Although the title can produce the sensation of sensory overload by filling the screen with adversaries, projectiles, and explosions, the game’s engine isn’t always up to the task. Beyond modestly detailed allied and enemy units, the game’s framerate can sputter, coming undone during the most crucial moments. Despite having multiple difficulty levels, Thunder Wolves’ is a bit of a pushover, with adversity only appearing halfway through the main campaign. Although local co-op is a nice feature, splitting pilot and gunner duties between two players, this variant can make the game even easier for cohesive pairs.

Although the game’s environments allow for a bit of free movement, Thunder Wolves’ won’t be mistaken for a sandbox-title. Occasionally, the pursuit of enemy helicopters transcended the title’s rigid boundaries, forcing a return to the diminutive air combat area. Ideally, the game would allow a bit more flexibility, and allow players to engage hostiles from multiple waypoints, instead of pushing them through a single set of preset markers. 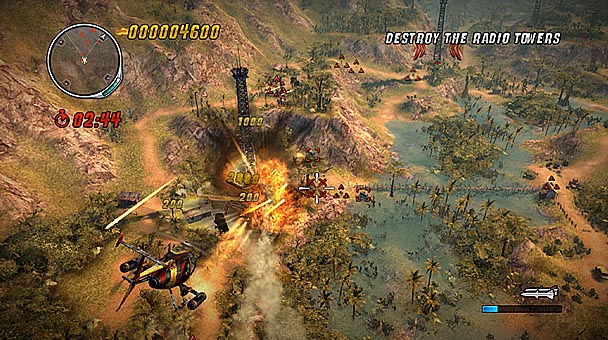 Is it worth the price? Although a four-hour playtime might seem stunted, online leaderboards encourage score chasing, conceivably extending Thunder Wolves’ longevity. Factor in that the game’s ancestry is rooted in the reflex-driven era of succinct arcade games, and the title’s $10 USD price doesn’t seem unreasonable. Purportedly passed over by Ubisoft, bitComposer grabbed distribution rights; hopefully the publisher allows Most Wanted to make a sequel. Despite a few blemishes, Thunder Wolves’ is a diverting reminder that beguiling play is still the backbone of any capable title.

Thunder Wolves Review
What is the concept? During the heyday of coin-ops, there was little need for narrative. Instead, arcade proprietors sought cabinets which would elicit adrenaline-emitting reactions, thereby earning a steady stream of revenue. The inclusion of any kind of extended story would just slow down the whole quarter-consuming process. Yet, as games moved from dingy public places to domestic ones, plotlines became expanded and the industry moved away from concentrated blasts of unfiltered euphoria. The recent PC, Xbox 360, and now PlayStation 3 release of Thunder Wolves teleports players back to that departed era of action-packed thrill rides. Combining the kinetic&hellip;

Summary : While Thunder Wolves’ engine isn’t lightning fast, a smorgasbord of munitions and explosions should satisfy the most ravenous appetite for destruction.