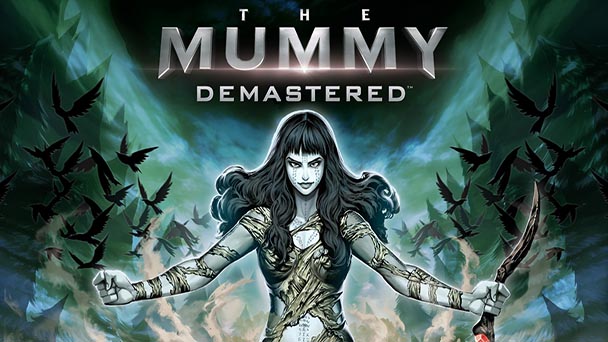 Not long ago, games based on film properties were routinely awful. Defunct publishers like THQ, LJN, Acclaim, and Ocean Software become known for their slapdash adaptations, each company attempting to make a quick buck by making games based on movies like Ratatouille, Friday the 13th, and Dennis the Menace. Habitually, blobs of pixels struggled to match the likeness of actors or backdrops, while chiptune renditions of the soundtrack were often unrecognizable.

The recent release of The Mummy Demastered for PC, PlayStation 4, Xbox One, and the Nintendo Switch inverts that principle, turning the Tom Cruise debacle into an intensely gratifying game. Combining the exploration of Metroid and Castlevania, while giving a powerful loadout right out of the Contra universe, it pays homage to the golden era of arcade gaming, offering accessibility without any knowledge of the cinematic source material. But it’s a shame that the WayForward-developed title is intrinsically linked to Universal’s misguided, inconsistent attempt of a reboot, potentially causing people to shun this effort. They’ll miss a prototypical example of how to honor the past while inserting a healthy amount of innovation. 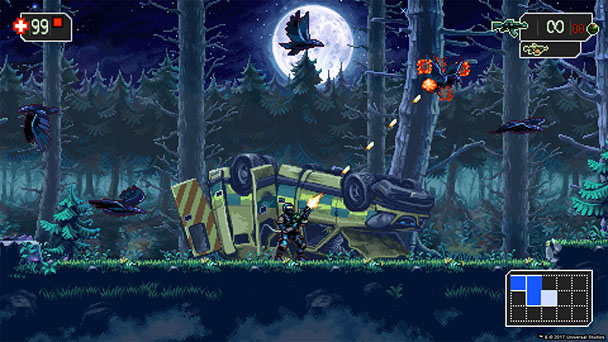 The Universal film cast Cruise as the lead while Russell Crowe was prepped for a spin-off playing Robert Louis Stevenson’s Dr. Henry Jekyll. But with Demastered, you serve as a nameless soldier employed by Prodigium, an organization tasked with locating, and destroying monstrous threats. After being separated from the rest of your response team and investigating a mysterious cavern, things grow increasingly hostile for the lone agent, forcing a quick retreat. A text crawl details the underlying source of the antagonism, revealing a hunt for Princess Ahmanet in an effort to put a stop to the malevolence. While Demastered includes elements of the film, it also diverges from the rambling narrative, offering a simpler and therefore more satisfying impetus.

Like the titles that inspired it, once you delve into Demastered’s gameplay, you’ll focus on the firepower and foes, rather than dwell on the plotline. That’s not a jab at the succinct storytelling but rather a compliment of the control scheme. Throughout The Mummy, you’re armed with a rapid-fire machine gun and unlimited ammo, which can eliminate roving subordinates with a few shots. Weapons can fire in eight cardinal directions, enabling gamers to adopt a run-and-gun approach or hold the lock button- where they’ll stand motionless, firing at opponents around then. 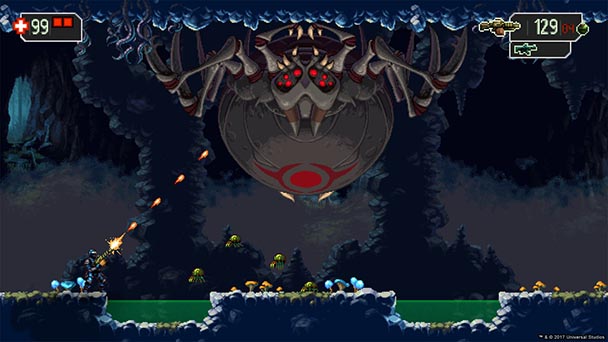 Unsurprisingly, your arsenal grows as you persist as an agent of Prodigium, with alcoves hiding new weapons and tools. Early on, you’ll unlock grenades that can be hurled at foes, but more importantly, they can be used to destroy the wooden barricades that gate off access to the deeper areas of Mummy’s Metroid-like labyrinth. From a heavy assault rifle, flamethrower, and a strangely enfeebled harpoon, there’s a number of arms that you’ll discover, while other items offer perks like improving your jump, allow you to maneuver underwater, or limit the knockback when hit my an enemy or projectile.

Drawing distinction from many of Mummy’s peers, a complete loss of hit points forces you to lose your loadout. But in keeping with the subject matter’s theme, your agent doesn’t merely perish. Instead, he acquires a light green pallor and a rancorous demeanor, coming back to life as an enemy. Players who are able to hunt him down and kill him, not only get their loot back- but also a bounty of health-replenishing orbs that are essential after confronting one of these dangerous foes. 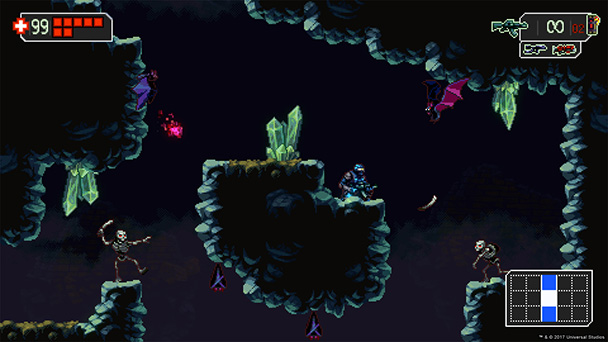 But mummified soldiers are hardly your biggest worry, with the game’s boss predestined to test your composure. Humongous foes who fill the screen, they’ll test your ability to distinguish attack patterns and pinpoint weak spots, as you attempt to whittle away their life force. Much like Castlevania’s Medusa Heads or Mermen, some of The Mummy Demastered’s lesser enemies respawn incessantly, which can be a little annoying they you are travelling through a section and trying to avoid taking damage. As such, the showdowns with these larger creatures are more satisfying, generating a sense of finality when you topple the giant terror.

Largely, exploration mirrors the mechanics of Castlevania: Symphony of the Night, right down to the save locations that are positioned right off the main arteries. While that might sound like a knock against The Mummy, there’s actually a pleasing sense of familiarity, when you’re able to deduce where the next boss or ability-boosting pickup will be. Veteran gamers might even exhibit additional appreciation, as Wayforward likes to pay homage to classics, referencing elements like the clock tower stage from Super Castlevania IV. 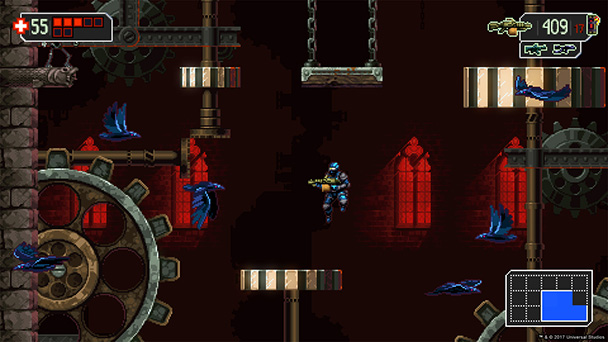 Visually, The Mummy Demastered exhibits pixelated grandeur, with elements like perks like parallax-scrolling backdrops and enemy animations that nearly rival SNK Playmore’s Metal Slug series. On even a modest AMD-A10 powered laptop , Demastered managed a fluid sixty frame-per-second output, with nary a hiccup during the most intense scenes. Sonically, the title is just as skillful, with a moody dark-wave soundtrack to complement the action.

Save for some perky enemy animations and a slightly underpowered harpoon, The Mummy Demastered offers at least six-hours of top-tier, Metroidvania-style thrills. While the source material might have been assailed by both critics and movie-goers,  Demastered is the rare tie-in that is exponentially better than its source material.

The Mummy Demastered was played on the PC
with review code provided by the publisher.

The Mummy Demastered
Platform:
PC, PlayStation 4, Xbox One, Nintendo Switch
Developer: Wayforward
Publisher: Wayforward
Release date: October 24th, 2017
Price: $19.99 via digital download
Difficulty: Moderate
The Mummy Demastered review
Not long ago, games based on film properties were routinely awful. Defunct publishers like THQ, LJN, Acclaim, and Ocean Software become known for their slapdash adaptations, each company attempting to make a quick buck by making games based on movies like Ratatouille, Friday the 13th, and Dennis the Menace. Habitually, blobs of pixels struggled to match the likeness of actors or backdrops, while chiptune renditions of the soundtrack were often unrecognizable. The recent release of The Mummy Demastered for PC, PlayStation 4, Xbox One, and the Nintendo Switch inverts that principle, turning the Tom Cruise debacle into an intensely gratifying&hellip;