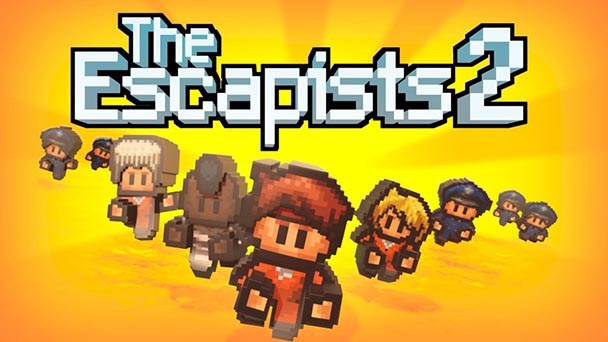 The methodical, multistep jailbreak might seem like an unlikely subject for a video game. After all, electronic amusements habitually indulge audiences with doses of carefree escapism rather than depict the myriad of meticulous steps leading up to a potential escape. But Mouldy Toof Studios, a single-man development house, achieved the unlikely with 2014’s The Escapists. Recreating the repetitive routine of prison life, while adding opportunities for experimentation, the title masterfully merged these two concepts, as it gradually goaded gamers toward a gratifying payoff.

Playing it safe, the release of The Escapists 2 doesn’t attempt to revolutionize the approach. Instead, the PlayStation 4, Xbox One, and PC-based title contributes a number of improvements, making it a commendable, but largely familiar experience for players who fled from the original game’s institutions. For those who didn’t get a chance to experience Team17’s Unity port, the sequel does an admirable job at converting the minutiae of any respectable jailbreak film into interactive form. And while there’s a strong element of trial-and error that drives the game, there’s also a particularly pleasing payoff when a plan finally reaches fruition. 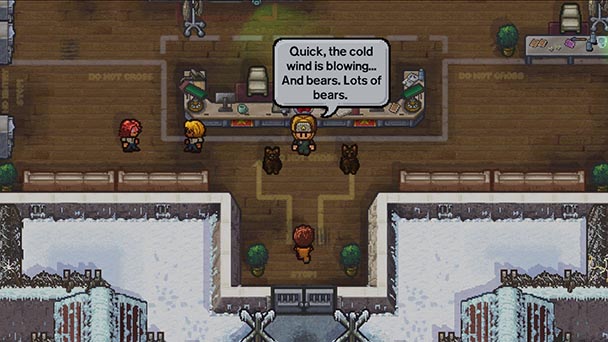 Like the original game, there’s a broad footpath that leads to freedom. Initially, your convict lacks basic convict competence. Fortunately, prison life typically gives ample time for self-improvement, where button presses and holds represent strength-building bench presses and an education in practical engineering. Largely, you’ll need to improve both brawn and brain, as the former lets you overcome your fellow convicts, while the latter permits you to craft an ever-broadening array of items.

In Escapists, the method to getaway is typically found in hand-made tools and weapons. In the game’s tutorial, you’ll MacGyver a shovel capable of burrowing through to an underground car lot and construct wire cutters used to snip away at overhead ventilation covers. Shrewdly, not all of the tools are essential for your escape. Many will be crafted to meet the demands of others, as prisons seem to demonstrate social exchange in its purest form. ‘You scratch and don’t shiv my back, and I’ll take care of yours’ is the steadfast law of each penitentiary. 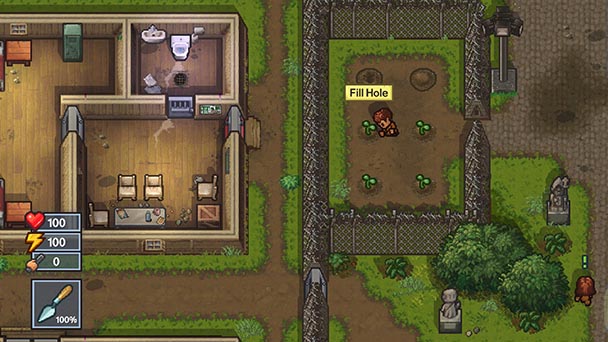 This isn’t Minecraft, so procuring the bits and pieces to make prison implements is genuinely challenging. Yes, you can rummage about, looking for opportunities to seize items from your fellow felons. Or there’s the possibility of procuring a key from a guard who’s fallen during an impromptu riot. Appropriately, each method conveys anxiety, potentially alerting an observant guard, and elevating your suspicion meter if you don’t quickly pocket any contraband. Then there’s the habitual inspection, where two inmates are chosen at random for a cell search. If you have some prohibited goods in your cubicle these sequences can bound to produce a bit of anxiety.

As such, Escapists can feel subversive. Some of the time you’ll appear obedient, docilely reporting for roll-call, meals, and or any accepted jobs. But then when the guards wander off, and you’ll seize the moment to work on your plan, breaking rules with dogged determination. It’s this juxtaposition that makes The Escapists 2 worth experiencing, as you shift from ideal inmate to deceitful absconder. 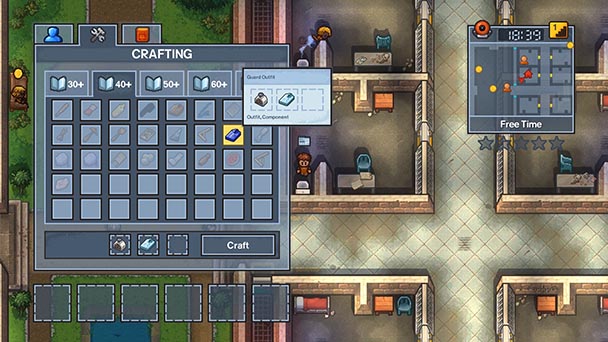 Woefully, there are other moments where the game can induce irritation. Occasionally, a single errant button press will unravel your entire plan. Fittingly, any exposed attempt at exodus is treated strictly, with guards confiscating all of your strenuous work and sending you to solitary confinement. When this happens, all of the ingenuity and apprehension that Escapist 2 generates can turn into tedium. Others might be turned off by the title’s decision to include a number of YouTubers as inmates. While streamers helped to bring attention to the first game, the decision to pander to egos seems dubious.

Many of The Escapists 2’s penitentiaries are similar in structure to the first game, with thematic diverges for a few of the contexts, like the new space prison. Notably, the sequel received a visual upgrade with the pixelated characters and environments of the first game now exhibiting the level of detail demonstrated by the 16/32-bit generation of consoles. Pleasingly, this upgrade means that settings flaunt a bit more detail, with minute elements helping to fight austerity. One element that brings a pleasing amount of variation to the formula is the integration of transport prisons. With smaller settings and time limits, these are a bit more linear, but offer a refreshing change of pace from the rest of the penitentiaries. 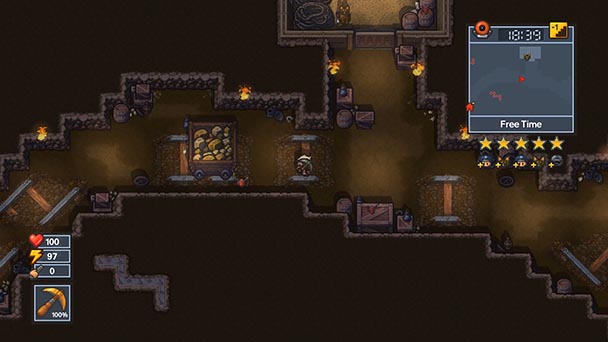 Escapists 2’s most significant new addition in the inclusion of off- and on-line multiplayer. Although the game shirks the idea of offering a virtual Stanford Prison Experiment, with players assuming the roles of guards and convicts, the presence of cooperative and competitive modes are welcome. The former introduces areas that are only accessible through the efforts of both players, while the latter offers contests where participants see who can break free first. Pleasingly, matchmaking was instant and connections proved lag-free.

Nintendo Switch Comparison
Given the restrained specs of the Nintendo Switch, ports occasionally are forced into compromise. Fortunately, that’s not the case with The Escapists 2, where the game’s retro-inspired visuals are a perfect match for the hybrid system. Whether docked or undocked, the game’s framerate remains consistently steady, even when the screen is split vertically for drop in/out multiplayer.

Unsurprisingly, a shared screen makes things just a bit more difficult. Not only are you provided with a smaller view of the action, but switching between tools with the tiny Joy-Con triggers can be an obstacle for those with larger fingers. But if you can get past controlling your absconder with a micro-controller, playing with a friend is one of the best reasons to get Escapists 2, often dispensing a succession of comic misadventures.

Sure, you can play online, but a pair of budding fugitives won’t get far without a way to coordinate their efforts. So, you’ll want to use Discord or Skype when playing remotely. Of course, you could just trying to play with a random stranger, but there’s always the chance they’ll ditch you at the last moment, which probably makes Escapists 2’s jail-flights a little too realistic.

Like a convict who has planned his break for years, The Escapists 2 limits the number of chances it takes. On the downside, that means the sequel plays like its predecessor, with a few new additions like transport jails forming distinction. But playing it safe also means that the title introduces few blunders, and save for its tendency not to forgive mistakes, the title does the unlikely- unearthing enjoyment behind a set of restraining bars. 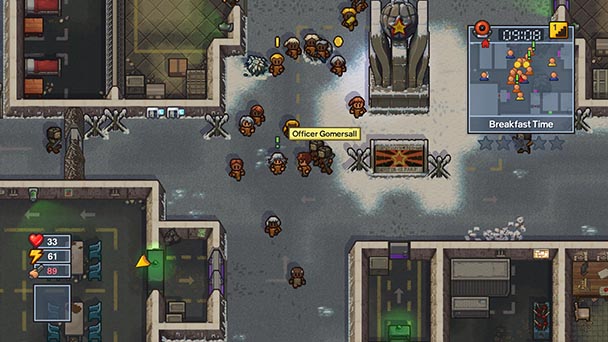 The Escapists 2 was played on PC with review code provided by the publisher.

The Escapists 2
Platform: PC, PlayStation 4, Xbox One, Nintendo Switch
Developer: Team 17 Studios, Mouldy Toof Studios
Publisher: Team 17 Digital
Release Date: August 21st, 2017 (PC, PS4, Xbox One), January 11th, 2018 (Switch)
Price: $19.99, available via digital download
The Escapists 2 review
The methodical, multistep jailbreak might seem like an unlikely subject for a video game. After all, electronic amusements habitually indulge audiences with doses of carefree escapism rather than depict the myriad of meticulous steps leading up to a potential escape. But Mouldy Toof Studios, a single-man development house, achieved the unlikely with 2014&rsquo;s The Escapists. Recreating the repetitive routine of prison life, while adding opportunities for experimentation, the title masterfully merged these two concepts, as it gradually goaded gamers toward a gratifying payoff. Playing it safe, the release of The Escapists 2 doesn&rsquo;t attempt to revolutionize the approach. Instead, the&hellip;

Summary : If you liked the original The Escapists, chances are they’ll enjoy the experiment-driven escapades found in the sequel. While it would have been pleasing to see the developers take more chances, there’s still plenty of enjoy in these penitentiaries.