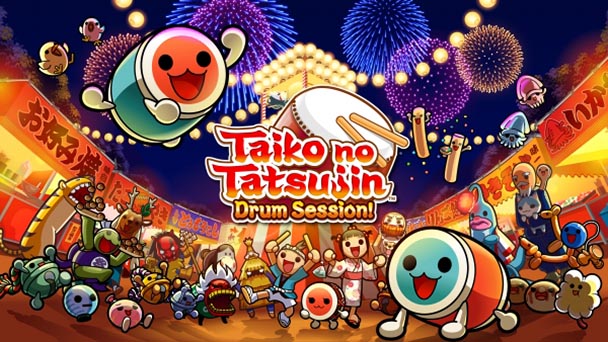 When Taiko: Drum Master arrived on the PlayStation 2 in 2004, it was all too easy to become charmed by Namco’s contribution to the music rhythm genre. As an adaptation of a 2001 arcade game, the title drew distinction from its peers by the incorporation of the taiko– a drum with a long history in Japan. The instrument was used during the feudal era to set marching paces for soldiers. During modern matsuri, its resonant sound is often heard during rousing musical performances.

Given the drum’s legacy, there was one discordant trait about Taiko: Drum Master– its soundtrack was rooted in Western music. Sure, tapping along to the rhythms of a Britney Spears, “Toxic” or nailing Chumbawamba’s “Tubthumbing” was immensely enjoyable, but there was something incongruous about not drumming away to the J-pop anthems of the original arcade game. As Taiko no Tatsujin arcade cabinets sporadically arrived, Drum Master’s set list was a reminder of early 2000’s localization practices. 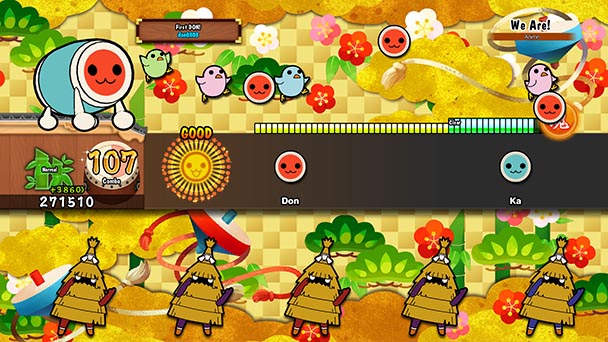 Now, fourteen years later, stateside gamers are receiving a proper follow-up. Fervent fans might have imported the Japanese or Asian-territory versions of the game, since the game had English (as well as Chinese and Korean) language support. But doing so would have made the acquisition of region-based downloadable content a bit of a hassle. With the stateside digital release of Taiko no Tatsujin: Drum Session! for the PlayStation 4, we’re getting the original soundtrack and the prospect of reasonably priced supplementary content. All that’s missing is a bundling with the Hori-manufactured peripheral, which really helps solidify the Taiko no Tatsujin experience.

Revealing its arcade roots, Drum Session skips any type of single-player, story-based mode. Instead, Taiko Mode permits players to challenge any of the game’s 70+ songs on four difficulty levels (with some tracks offering surprise variations on the highest challenge setting). Adhering to tradition, beat indicators come in two main variations: red/orange and blue. 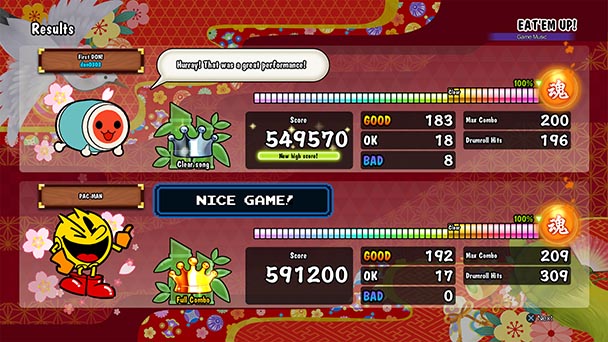 When playing with a controller, there are four options for button mapping, each employing different variations of face buttons, directional pad and bumpers. When using Hori’s optional taiko peripheral, the reddish notes require a tap to the drum head while the blue notes involve striking the rim of the device. Naturally, there are a multitude of variations, like extending notes that compel a fast-paced roll, a Kozuchi where the object is to fill and pop a balloon as quickly as possible, as well as large icons that expect players to hit both sides of the drum head or rim at the same time.

Mercifully, Taiko no Tatsujin adopts to a large number of skill levels. On the easiest setting, younger children should be able up. On expert, even the skilled drummers will face a consummate challenge as notes race past in a fury of color and sound. After each song, a bingo pops up on screen and meeting requirements results in a stamp in one of the boxes. If you’re able to form a line, you’ll receive a Don Coin that can be used to purchase modifiers like costumes, instruments, and card titles. This is just one of the ways Drum Session incentives replay. 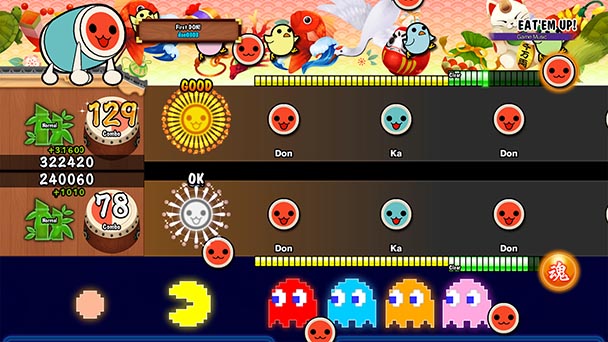 Competitively minded players will want to tackle the game’s Ranked Mode, where you can tackle other player’s performances, follow a five-song evaluation. Remarkably, you’re not just battling for top score. Instead, the game creates a profile based on your style of play. And if your performance beats the other player’s ghost, you’ll earn a coin, which helps heat up the match. Alternatively, there’s local play, which could be the catalyst for a rousing all-night party, if you have the extra cash for a second peripheral. There are also timed events, where you can compete globally,

One note about the drums: the Hori-manufactured one is the way to go. I found a cheaper, off-brand model in Akihabara and while it works, the device requires a lot of pressure to trigger. When the notes come careening across the screen, hitting the taiko with another force can slow you down significantly.  While the Hori drum needs a solid strike to register, its much more accurate especially around the rim. 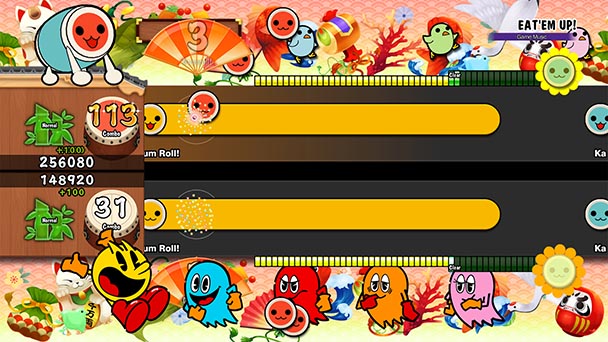 Soundtracks are an imperative component of any music rhythm game. Hands down, Taiko no Tatsujin: Drum Session has one of the best, especially if you’re a fan of J-pop. From “A Cruel Angel’s Thesis” The OP from Neon Genesis Evangelion, X-Japan’s “Kurenai”, to Your Name’s “Zenzenzense”, there are a lot of notable classics on the set list. If you aren’t familiar with the Taiko no Tatsujin franchise, the number and quality of Namco original songs is a treat. And while we didn’t get all of the DLC offerings from Japan, (a few notables like The Melancholy of Haruhi Suzumiya’s “Hare Hare Yukai” are absent), there a number of really tempting tracks to pad playlists. Naturally, gathering and licensing an entire country’s greatest music efforts is an impossible task. And while there might be a couple of glaring omissions, Bandai-Namco could be commended for their efforts. There’s a lot of great pop and anime themes here.

Visually, Taiko no Tatsujin: Drum Session stretches the boundaries of just how kawaii a game can look. From the game’s perpetually-grinning mascot, Don-chan, spited showdowns against characters like Hatsume Miku, Doramon, and Heihachi, to backdrops and loading screens that recreate the sights of summer festivals, the game has is teeming with charm. And when coupled with a soundtrack that bursting with enthusiastic pop, chances are that Taiko no Tatsujin: Drum Session! will captivate anyone enamored with Japanese culture. Just make sure you put enough money aside for one of those plastic drums. 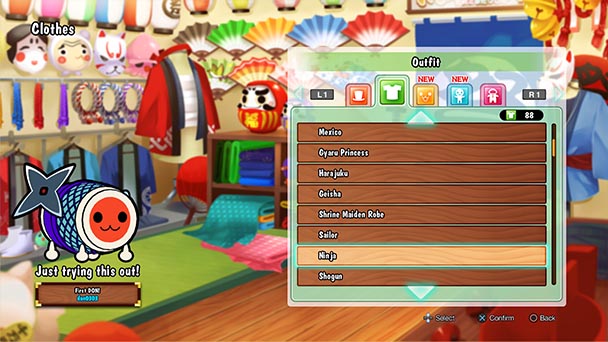 Taiko no Tatsujin Drum Session! was played on the PlayStation 4
with review code provided by the publisher.

Taiko no Tatsujin Drum Session! review
When Taiko: Drum Master arrived on the PlayStation 2 in 2004, it was all too easy to become charmed by Namco&rsquo;s contribution to the music rhythm genre. As an adaptation of a 2001 arcade game, the title drew distinction from its peers by the incorporation of the taiko- a drum with a long history in Japan. The instrument was used during the feudal era to set marching paces for soldiers. During modern matsuri, its resonant sound is often heard during rousing musical performances. Given the drum&rsquo;s legacy, there was one discordant trait about Taiko: Drum Master- its soundtrack was rooted&hellip;

Summary : Save for the smell of piping hot taiyaki, Taiko no Tatsujin captures the sensory delights of a summer festival. With adorable aesthetics and one of the best setlists in any music rhythm game, Drum Session deserves a series on encores.