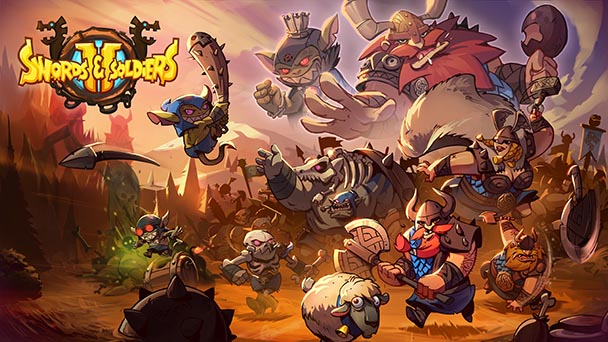 Typically, the industry employs an additive approach, with developers layering new gameplay mechanics onto pre-existing genres. But with the release of Sword & Soldiers II for the Nintendo Wii, Dutch developer Ronimo Games pares down many of the fundamental mechanics of the real-time strategy game. The result is a title that offers a refreshing amount of accessibility. It also draws focus on the strengths and weakness of each contentious combatant, as each soldier pushes the player that much closer to victory.

One of the most noticeable differences is the simplification of troop commandeering as well as the placement of resource gathering facilities. Eschewing the waypoints and wayward pathfinding of many RTS titles, units in Sword & Soldiers II move along a two-dimensional route. While the occasional traffic switch allows for a change of direction at forks in the road, largely your warriors plod along toward the right side of the battlefield, only stopping when coming into contact with enemies. When the do encounter enemies, units automatically engage the enemy without intervention, stopping until either they or their opponent is slayed. 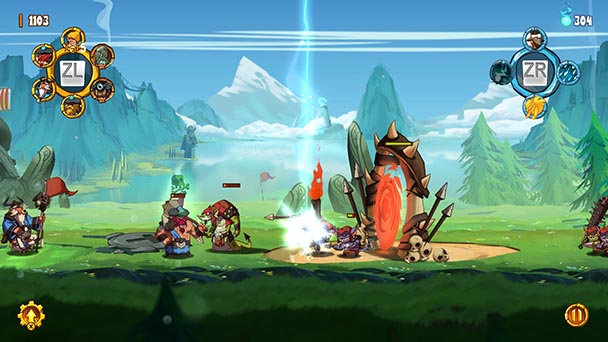 Likewise, resource gathering is also scaled back. The quantity of gold on any fifteen campaign stages can either be fixed, steadily mined as long as there are troops, or found on the battlefield.  As such, the supply of currency influences strategy, as troop building is the main method to spend the precious metal. One of the other options is building a mana tower at one of the predetermined points on the battlefield, which gradually stores the kind of paranormal power that can be channeled into a range of useful spells.

Although this description might make Swords & Soldiers II seem devoid of strategy, that’s not the case. Instead, the game’s storyline gradually let’s players take the help of three different factions: Vikings, Persians, and Demons. Like any respectable RTS, there’s an intricate balance in play, with each faction favoring attributes like spellcasting, stealth, or for the latter- a tower capable to generating an army of marauding skeletons. Much of the enjoyment stems from discovering the abilities of each unit, with is well demonstrated across the game’s campaign. Most enjoyable is Swords & Soldiers II’s penchant for variety, with the title exhibiting a major of each faction’s attributes. Naturally, the game doesn’t divulge all of its secrets, and it’s up to players to learn how to overcome say, the Persian Army’s flying magician military or the Demon’s barrel rolling suicide bombers. 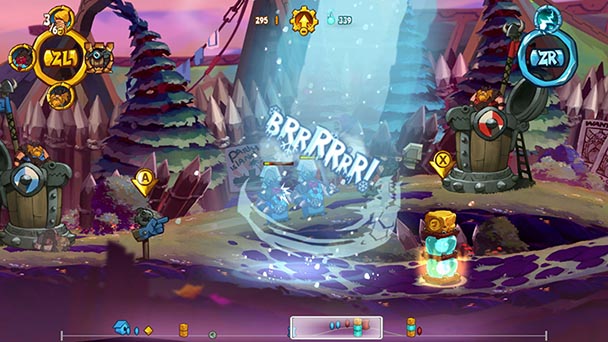 Once players have a grasp on each faction’s units and research potential, the game’s Open Battles provide a pleasing prospect, allowing participants to build a dream-team comprised of units from different factions. It’s here that Swords & Soldiers II really shows its strategic prowess, as conceptualizing and debating the ideal idea is almost as much fun as testing your squad.

The sole downside is that like its predecessor, Swords & Soldiers II doesn’t support online play, which would have been a worthwhile addition. Instead, the title does an admirable job of accommodating two local participants, allowing one player to use the television and a controller while the other uses the Wii U’s GamePad to issue commands. To help compensate for the smaller amount of screen real estate, those who opt for the smaller screen have the option to utilize touch controls. Whatever input method is selected, unit selection and research commands are largely intuitive, with players able to send troops as quickly as cool-down timers will permit. 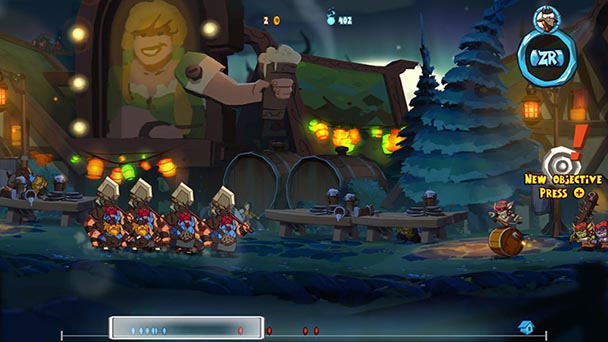 Whether players decide on playing the campaign levels, open maps, skirmish or multiplayer mode, Swords & Soldiers II pace is consistently quick. One of the game’s advantages over other RTS is the abridged infrastructure building. Instead of investing a quarter-hour assembling a doomed army, the title’s clash happens immediately, lessening the agonizing sting of defeat. In fact, Swords & Soldiers II’s gameplay can be a bit too involved at times, with a noticeable difficulty spike midway through the story mode. Fortunately, an easy mode is opened after failing a stage, although playing at this level won’t unlock any of the in-game achievement medals.

Visually, Swords & Soldiers II sumptuous sprite-work recalls the Rayman Legends, exhibiting an array of attractive characters that animate fluidly. Given the game’s half gigabyte footprint, Ronimo Games has crammed the download with content, from substantial backdrops to an impressive amount of voicework that straddles the line between the comical and satirical. Most remarkable is the title’s sound effects, particularly when you can hear large characters trudge across the battlefield. 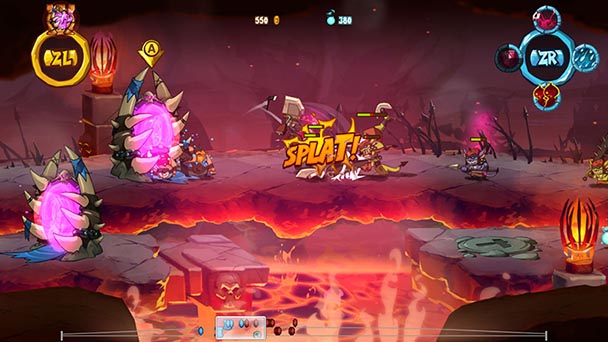 Given the game’s twenty dollar price, Swords & Soldiers II offers a reasonable amount of entertainment. Although the game’s campaign can be completed in about six to eight hours, a skirmish mode with an array of adjustable options has the capability to double that duration. That said, the tipping point might be the presence of another local player, with Swords & Soldiers II offering the type of challenge that might keep competitors coming back.

Swords & Soldiers II was played on the Wii U with review code provided by the publisher.

Swords & Soldiers II
Platform: Wii U
Developer: Ronimo Games
Publisher: Ronimo Games
Release date: May 21st, 2015
Price: $19.99 via Nintendo eShop
Swords & Soldiers II review
Typically, the industry employs an additive approach, with developers layering new gameplay mechanics onto pre-existing genres. But with the release of Sword &amp; Soldiers II for the Nintendo Wii, Dutch developer Ronimo Games pares down many of the fundamental mechanics of the real-time strategy game. The result is a title that offers a refreshing amount of accessibility. It also draws focus on the strengths and weakness of each contentious combatant, as each soldier pushes the player that much closer to victory. One of the most noticeable differences is the simplification of troop commandeering as well as the placement of resource&hellip;

Summary : While the Chinese and Aztec troops of the first game are missed, Swords & Soldiers II is a commendable sequel, and stands on one of the best download-only titles in the Wii U’s digital store.