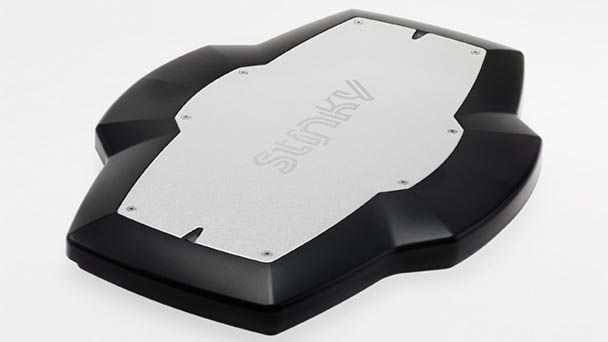 With the plethora of peripherals available to the gaming market, it’s no wonder so many of them get overlooked.  Some are superfluous, others are downright useless, and a good percentage of them are priced at a point that makes it difficult to justify picking them as a game enhancer.  So what sets the Stinky Footboard apart from these problems?  In a word: everything.  Yes the name is…unique, to put it nicely.  But this was intentional on the part of the designers.  They wanted a name that would be funny and memorable. They also chose the name because it clearly conveys what the product is: a board that you control with your feet.

On first opening the package, the inside looks great.  Nestled in a black textured recess, the board and three sets of springs look simple yet elegant.  True, “elegant” and “stinky footboard” are not words you expect to see paired together, but the brushed metal set into heavy-duty black plastic looks sleek and feels sturdy without being heavy.  The different sets of springs are color coordinated to represent different tensile strengths, from blue to green to red.  The board comes with an Allen wrench and it’s a cinch to set up.  The springs can be swapped for more or less tension, and each of the four tension boxes adjusts to create more or less resistance.  Also each of the four boxes adjusts independently, so if you want to toss grenades but your feet tend to frenzy while you’re FPS-ing and you don’t want to accidentally frag friendlies, you can increase the tension in just that direction to prevent excitable foot taps.  Otherwise, the board is designed to allow feet to rest easy on the plate. 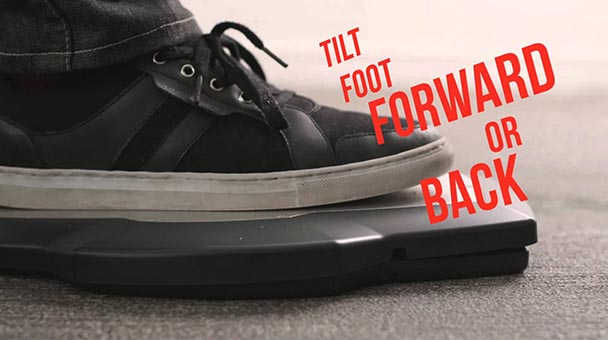 The board comes with another set of blue and green springs already inside and I found these sufficient for my feet. A couple twists on the tension boxes and I was ready to game.  The board has a recessed USB port underneath so that it won’t wear on its cord as you press down.  The software was supposed to be self-loading upon plug in but that didn’t happen for me so I went to the Stinkyboard.com website.

The website is easy to navigate and has a support page with several downloads.  There’s the software configurator, which provides users with an interface for key-binding and profile saves, firmware updates (also accessible through the software interface), and a downloadable quick guide PDF for users who want more direction. 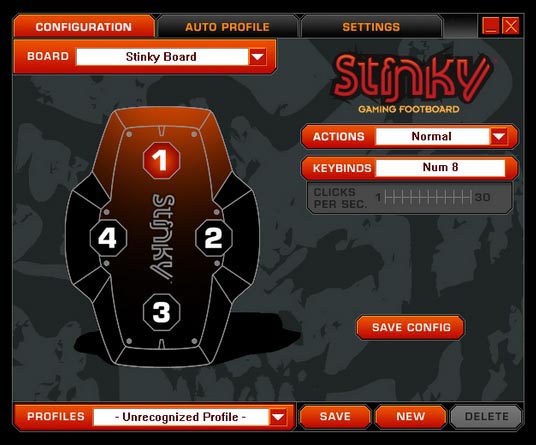 The configurator gives users a dynamic interface for setting the key bindings.  Binding keys is as simple as clicking a directional preference for the board and then pressing the desired key assignment.  Each direction will support a single key assignment as well as Shift+X, Alt+X, and CTRL+X assignments for games which allow Shift, Alt, and Ctrl customizing.   Each key binding can also be ascribed one of four actions upon foot press: Normal, Key Bound, Pulse, and Unbound.  These actions correspond with a normal keyboard press, a single action “down and release,” a repeated action, or no action.

So far the footboard can only accept these simple, singular key assignments as opposed to full macros, because the designers did not want the board to be seen as a “cheat.”  However, they have said they will consider allowing macro assignments if they receive enough gamer request for it.  The configurator also allows the user to save up to nine different profiles for the board, which can then be assigned to any games that will work with that layout.  These configurations will load to the board in under a second, and there is also an auto-profile switching option. 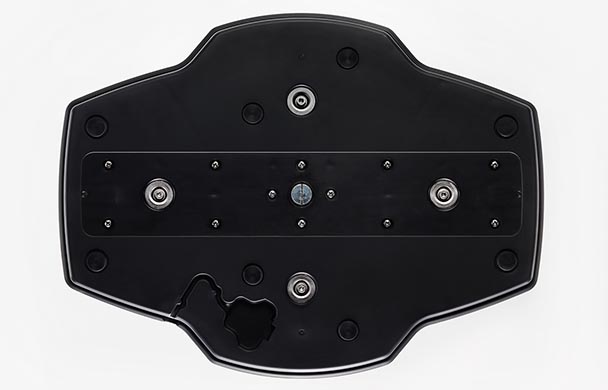 Once it’s running the footboard is super intuitive and fun to use. I’ve been on a Skyrim kick lately, so that was the first game I loaded up after configuring a few profiles.  Running around the game became much more natural and immersive feeling because I was actually using my feet to control movement.  It freed up my left hand from WASD but there wasn’t much else I needed my left hand for, so I changed the configuration to shout, crouch, sprint/roll, and interaction.  This allowed me to crouch and roll easily while moving, Dragon shout while strafing, and pickpocket people without having to pause my movement, which left me feeling like a much more capable warrior-thief.  This combo was satisfactory enough that I wanted to move on to a game which called for a lot more left hand action, so I switched over to Diablo 3.

The footboard was a total joy to use with Diablo 3. Not needing WASD key bindings, I assigned my health, inventory, skills, and maps to the footboard.  I could glance easily glance at the map while running, or use one foot press to quickly glance at new drops in my inventory and another to put it away.  I have occasionally lost my life while my pinky probed for the health key, so being able to tap to heal also reduced my death rate. Of course, using my feet to tap into these menus isn’t necessary, but it did increase the fluidity, and therefore enjoyment, of gaming.  I then assigned my primary and secondary attacks to the footboard for the endless swarms of the nephalim trials, a feature which will allow players to develop calf muscles instead of carpal tunnel. 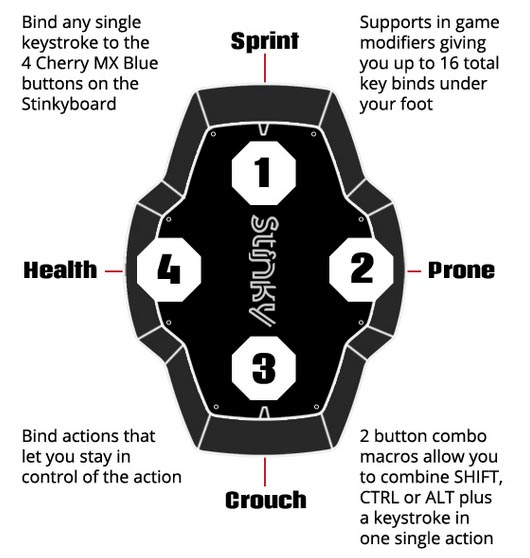 The other important thing to note about the Stinky Footboard is its versatility.  The board can be used with programs like Photoshop which capitalize on keyboard shortcuts to create a more streamlined process for photo editing.  There is a slight learning curve as you learn to utilize key commands with your feet, but then it becomes a natural flow.  From a productivity standpoint the use of the footboard has increased editing speed and has taken some of the tedium out of simple projects.

The Stinkyboard crew has been demoing the board with Battlefield 3, a great choice since it’s such a renowned FPS.  The beneficial applications for FPSs are obvious.  Everything from grenade throws and crouching can now be assigned to your feet, freeing up your hands to tackle other angles of a fire fight.  And lovers of the Battlefield who haven’t previously picked up the title are in luck because Battlefield 3 is available for free for the next few days for those who download it through Origin.  This will save money to spend on the Stinky Footboard for gamers who want to get their feet wet.  The footboard sells for somewhere between $79.99-$99.99, depending on the seller.  You don’t have to share Lawman’s love of peripherals to find this a pleasing purchase. The Stinky Footboard will really step up your gaming.

System Requirements:
Software: Windows 8, Windows 7, Vista and Windows XP (All versions: 32 and 64 bits). Mac Users have hope; the board is expected to have Mac compatibility by late 2014.
Internet connection (for configuration software download)

Stinkyboard Footboard Controller
With the plethora of peripherals available to the gaming market, it&rsquo;s no wonder so many of them get overlooked.&nbsp; Some are superfluous, others are downright useless, and a good percentage of them are priced at a point that makes it difficult to justify picking them as a game enhancer.&nbsp; So what sets the Stinky Footboard apart from these problems?&nbsp; In a word: everything.&nbsp; Yes the name is&hellip;unique, to put it nicely.&nbsp; But this was intentional on the part of the designers.&nbsp; They wanted a name that would be funny and memorable. They also chose the name because it clearly conveys&hellip;

Summary : The Stinkyboard Footboard Controller in an innovative and effective peripheral which allows players to utilize those other, inactive appendages for gaming.