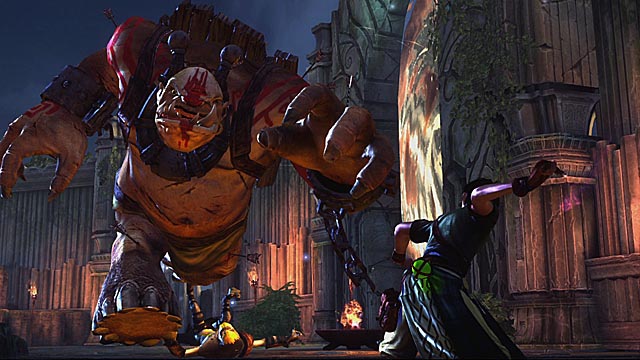 When Sorcery was first revealed at Sony’s 2010 E3 press conference, the title seemed like the Move’s killer app, allowing players to cast fantastical spells by flicking and twirling the motion-sensing peripheral. Following two years of taciturnity from The Workshop and SCEA Santa Monica (who shared development duties), the title’s retail release demonstrates that Sorcery has emerged from its protracted development cycle unscathed, offering a spirited romp that is capable of entertaining both the casual audience as well as placating core gamers. Yet, the game’s linear nature and deficiency of depth mean that Sorcery isn’t likely to inspire an upsurge of Move sales; the modest title is best suited to players who already own one of the devices.

Drawing unmistakable inspiration from The Sorcerer’s Apprentice- the showpiece short featured in Disney’s Fantasia, the game’s opening cinematic introduces players to Finn, a prodigious yet impulsive pupil. With his mentor away on errand, the protagonist stumbles upon a magic wand, endowing the understudy with the ability to cast rudimentary spells. Playing superego to Finn’s unchecked id is Erline, a catlike creature who doggedly cautions the hero against reckless action. Although the banter between the characters can be mildly amusing, the hero’s incessant “bro-speak” is vexing, and seems at odds with the game’s ancient Celtic aesthetic. 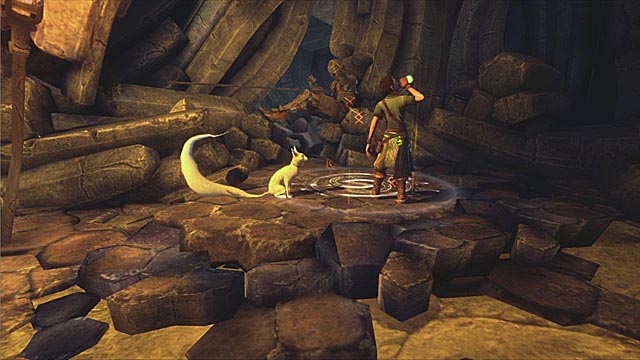 While Sorcery’s storyline is relatively benign, the game’s control mechanics habitually shine. Players move Finn with either the Sub-Controller or the analog stick of a Dualshock, using a variety of obtained skills to push forward. From sporadic fallen pillars that can be levitated with a swing of the Move to splintered doorways which can be destroyed with a shield bash, the majority of the game’s environmental puzzles aren’t cerebrally challenging, instead encouraging a few techniques for the sake of variety.

Agreeably, combat works even better. Flaunting true 1:1 motion, every spin and snap of the Move controller is mirrored by Finn’s on-screen wand. At the beginning of the game, players are given an arcane bolt spell- with each flick of the controller sending out a spark of glowing energy. Adding a bit of curve to each cast allows players to arc their shot around obstructions, while lofty enemies can be dispatched with a vertical casting. Although there’s a bit of disconnect between snapping a real-world tangible controller and seeing its trajectory on a 2D screen, Sorcery often supplies a bit of auto-aim to ensure magic missile hit their targets. The only time when the game doesn’t offer assistance is when a group on foes are directly in front of the player, inciting a moment of humiliating Move yanking. 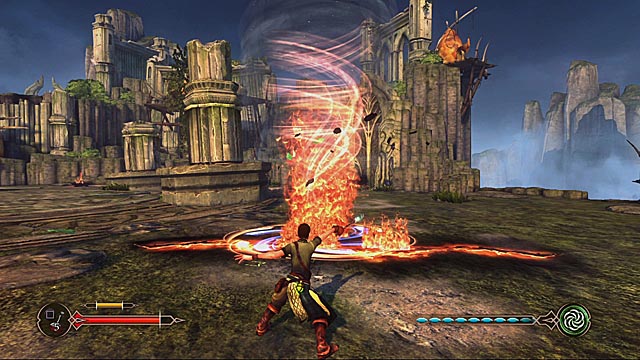 Beyond the fundamental arcane bolts which cost no mana to use, players earn additional elemental spells, bequeathing Finn with the ability to manipulate earth, wind, ice, fire and lightning. As gamers’ casting repertoire grows, so do the number of offensive opportunities. From laying down a wall of fire capable on converting routine arcane bolts into searing fireballs to combining charging a tornado with lightning or fire, experimentation is urged. Complementing the gesture-based battles are a few elements which require players to manipulate their Move controller in different ways- from shifting elementals, quaffing health potions, and mixing collectables to extend Finn’s natural abilities. Most of these acts use natural motions to convey an action- such as shaking a concoction before tilting the controller to simulate the pour of a potion. It’s a shame that switching casting loadouts on the fly isn’t as responsive, triggering a bit of frustration as players try to change elementals to exploit an enemy’s weakness.

Although Sorcery’s environments are eye-pleasing, there is a regrettable linearity to the game’s seven-hour journey. While the sporadic alcove contains trinkets or coin, the title pushes players down a main path, ditching any chance of replayability. Once players complete the game, no New Game+ component exists, nor is there much incentive to revisit Sorcery’s realms as the title has revealed its full hand. Although the game’s forty-dollar price helps remedy this blemish, for many the game might work better as a rental than a full-price purchase. 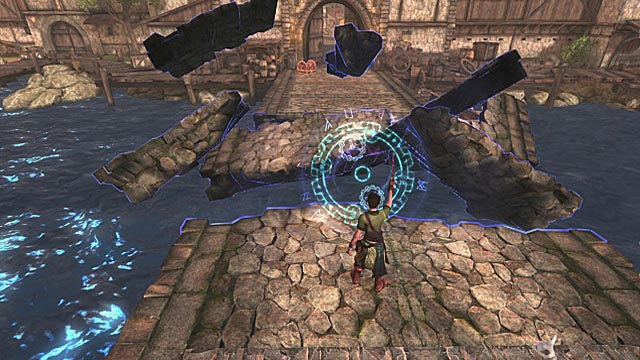 Take away Sorcery’s engaging gesture-based mechanic, and you’re left with a pedestrian adventure destined for the bargain bin; thus explaining the requirement for Sony’s device. Yet, accounting the title’s intrinsic tie to the peripheral, Sorcery can offer a satisfying experience, charming a roomful of hopeful Harry Potters with absorbing spell casting. It’s regretful that the developers didn’t utilize the game’s protracted development period to create an experience that truly enchants its audience with a captivating amount of depth and mesmerizing amount of polish. Such a feat would might have secured must-own status for the Move, which the peripheral desperate needs to escape curio status.