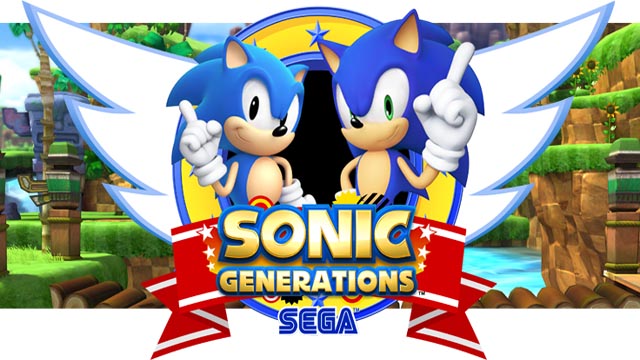 Over the past quarter century, Sonic’s console career has endured more fluctuations than a sprint through the Casino Zone. From the ecstatic heights of early cartridge-based excursions, the depths plumbed by the unmanageable controls of 2006’s Sonic the Hedgehog, to the elevated redemption of recent release Sonic Generations, the character’s home-based titles have oscillated wildly in quality. Fortunately, Blue’s portable jaunts have been much more consistent- delivering competent ring-collecting sprees across the GBA, DS, and PSP platforms.

So it’s no surprise that Sonic Generations for the 3DS makes an amiable first impression. Flinging players into a remixed Green Hill Zone, the hedgehog’s familiar environments have been dutifully recreated, with high resolution palm trees and azure skies brimming with picturesque clouds. Like the console version of Generations, the game unites together two distinct eras of Blue’s legacy: the classic onyx-eyed hedgehog with his contemporary, toned, and slightly deeper-hued doppelganger. 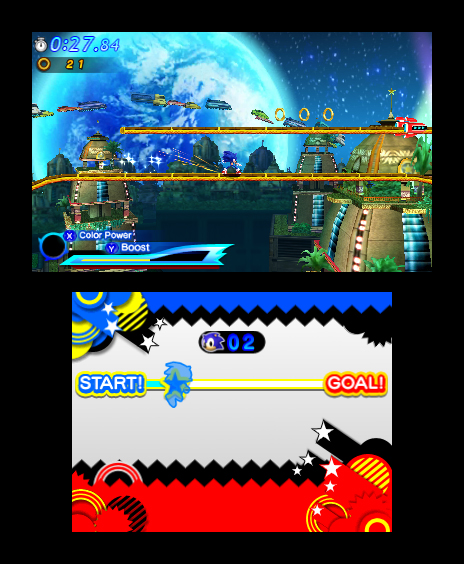 Yet, once players venture into the cartridge’s interpretation of modern Sonic’s deeds, the game’s shortcomings start to show. Whereas the console version of Generations’ supplied a divergent set of three-dimensional environments to explore- this adaptation delivers 2D levels stages using the same assets, albeit with the occasional change in camera perspective. As such, the commemorative fusion of both Sonics feels muted, as both classic and modern stages feel woefully similar.

In essence, the fundamental difference between the two hedgehogs is their distinctive control schemes. Genesis-era Sonic uses his customary spin dash and roll, while his twenty-first century counterpart offers a lock-on attack, crouch, and boost.  Although when players unlock the ability to perform a homing attack with the classic hedgehog, Generations’ core hook loses its potency. Fortunately, the title convincingly models Sonic’s traditional physics system. Blue’s top velocity and sense of momentum feels true, although the hyper-springy ring boxes or being able to poke your spiked head through the ground in the Emerald Coast will certainly alarm Sonic veterans. 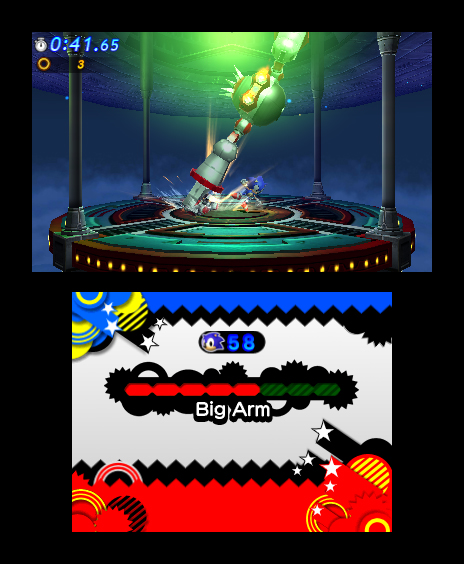 Enthusiasts might also lament Generations’ intermittent level design flaw, which can impale the ‘hog against a cluster of spikes or off a cliff with little warning. While each of the game’s stages prudently update the aesthetics of memorable locales- from Sonic & Knuckles’ Mushroom Hill Zone to Sonic Adventure 2’s Radical Highway, sporadically a player’s jubilant dash will come to a screeching halt when an obstinate obstacle is encountered. Occasionally, there’s the completely unanticipated mortality, such as when Blue enters a patch of foliage to initiate a transition, but triggers an unseen death instead.Since completion time factors into stage ranking much more than ring collection, players are urged to race through levels as quickly as possible. Regretfully, this emphasis on haste increases the likelihood of colliding with an enemy or dashing off a precipice.

Beyond the classic and modern interpretations of prominent levels from Sonic lore, the title also delivers bonus rounds and boss fights. The former recall the cylinder sprinters of Sonic Heroes, tasking the hedgehog with collecting boost-refilling balloons while avoiding hazards, in an effort to nab a set of Chaos Emeralds. While some of the conflicts with baddies are dissimilar from the main stages, they can feel a bit lackluster. Many pit Sonic against an enemy in small area, obliging gamers to study a simple attack pattern. Challenges which pit the hedgehog in a footrace against an enemy tend to work better. 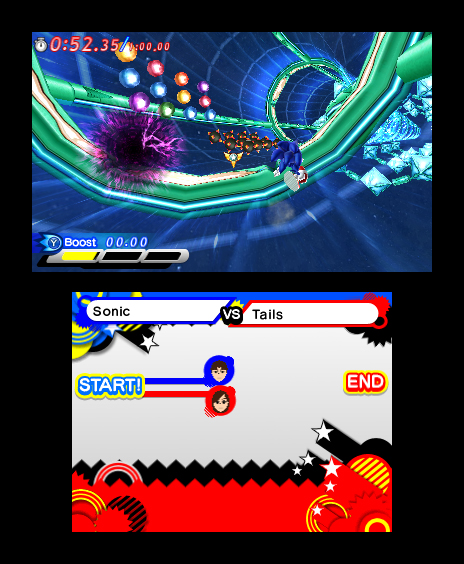 Although the main campaign can be conquered in about five hours, the title does offer a pleasing selection of additions to maintain a player’s interest. Beyond online multiplayer, time attack trials, the game also offers a hundred additional challenges. Sending players back to familiar stages, these tests defy completing a level without eliminating an enemy or collecting a preset number of rings in a limited time span. While challenges are opened up as gamers trek through the storyline, they can also be opened through StreetPass connections or purchased with Play Coins.

Following the resplendent revitalization of Sonic on consoles, players might expect a similar renaissance on their 3DS screens. Although Sonic Generations delivers the exhilaration of zipping through celebrated corkscrewed courses, a number of setbacks prohibit Blue from reaching top speed. While the title’s visuals and aural virtues recall the ‘hogs finest moments, a few embarrassing reminders show up as well. 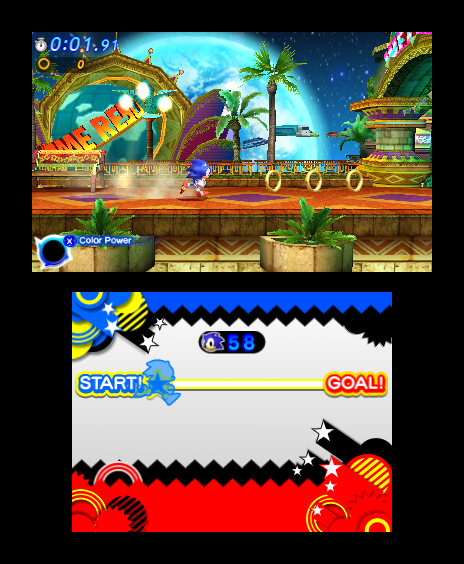