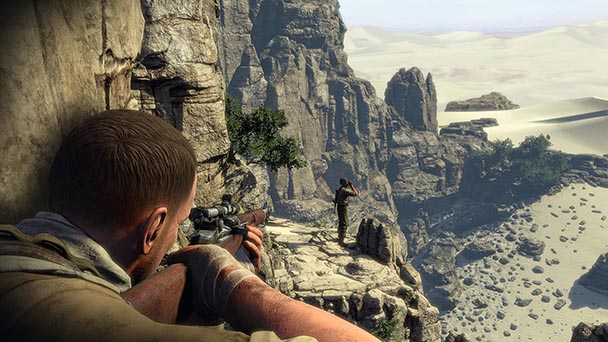 Not long ago, the shooter was one of the most visceral and engaging genres around, consistently delivering frantic firefights that outmatched the best summer blockbusters. But over time, those once-invigorating action sequences began to lose their impact, as thrill ride-type spectacle took priority over delivering deep and gratifying play mechanics, at least in the single-player arena.

Undoubtedly, Oxford-based developer Rebellion is aware of this dilemma, as their Sniper Elite series has been gradually creeping toward an open-world approach, giving players the tools to produce viscera-splattering mayhem from the shadowy alcoves of World War II battlefields. The developer’s previous efforts have always flirted at the concept of an expansive sandbox- playgrounds where players could engineer and execute their own offensive orders. 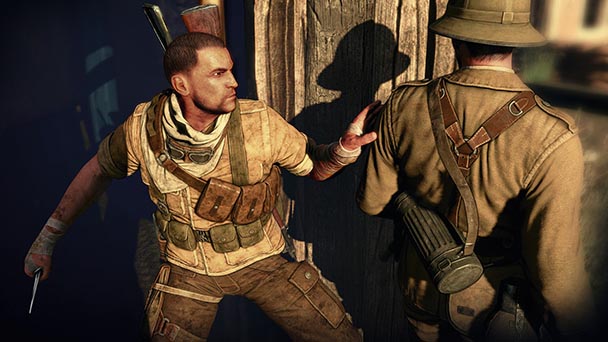 With the release of Sniper Elite 3 for the PlayStation 4, Xbox One, and PC those ambitions have almost been realized. Across the eight levels of the title’s single player campaign, the game gives near-absolute autonomy, allowing for gamers to spend protracted periods reconnoitering each stage, or even to play improvisationally. For those who don’t have the patience to formulate fastidious strategies, the game offers the ability to pick off targets of opportunity. Whether offering the possibility of stealthy melee-based attacks, allowing traps to be placed along patrol routes, and of course- the long ranged rifle shot, the player’s arsenal is both lethal and varied. Pleasingly, gamers don’t even have to eliminate every opponent from the field, opting to thin out enough enlisted grunts to gain a clean shot at a Nazi officer.

Unsurprisingly, a number of core elements return from 2102’s Sniper Elite V2, along with several new systems which help to promote the extemporaneous gameplay. For those who elect to play Elite 3 with the game’s assists turn on, a tap of the right trigger places the protagonist in Focus Mode, not only slowing down time and zooming in a bit, but projecting a crimson crosshair that calculates distance, wind, and elevation- allowing players to snipe with surgical precision. 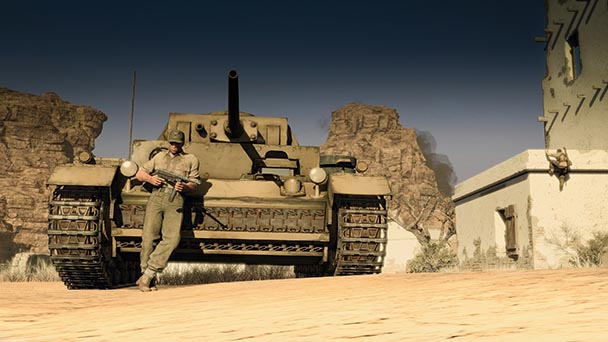 Gamers seeking a more challenging test can elect to turn off many of the game’s assistive features. Beyond forgoing the aforementioned Focus Mode, elements of the HUD can be sacrificed, pushing Elite toward simulation territory. With the mini-map, awareness indicators, and ability to tag and track foes eliminated- as well as the title’s ballistic realism is turned up, stages offer up a consummate challenge- but one that’s rarely feels unfair. Commit a grave error and it almost always stems from your own impulsiveness or the inability to adapt to an unexpected situation.

The reward for sending a slug rocketing through a foe’s body is Sniper Elite’s signature cinematic- a ghoulish X-ray which exhibits every little bit of damage done to an enemy’s skeletal and muscular system. While it’s an effect that was employed in Elite V2 and is used with high frequency here, the sequence loses little appeal over time, as it calculates the impact a large caliber round has on a soldier’s teeth, tibias, or even testicles. For Elite 3, slow motion carnage is also exhibited when the player sends a projectile through a vehicle’s fuel tank, propelling lethal shrapnel into nearby adversaries as the camera spins around to capture every glorious moment. 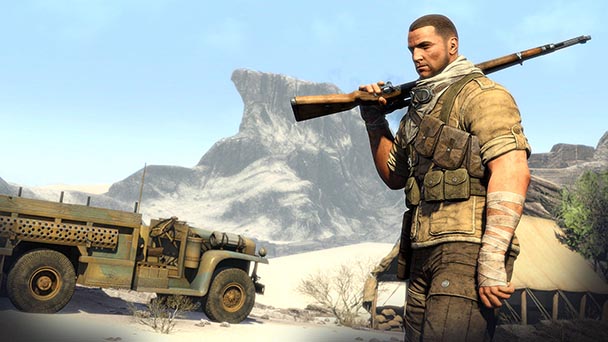 Elite V2 seemingly sent in entire battalions of the Axis infantry after the protagonist when an enemy discovered his position. Sniper Elite 3 employs a more lenient approach, requiring players to reposition after a series of shots divulges your position. Scamper off without being seen and a translucent shadow of the player appears, revealing where foes think you are located, much like Splinter Cell: Conviction’s Last Known Position mechanic. Another way to mask your position it to fire when a raucous machine engine is clamoring away. Courteously, Sniper Elite 3 exhibits an on-screen noise indicator, allowing hearing impaired players to utilize the maneuver.

While skulking through the African locales of Elite 3 is typically an engrossing experience, a few flaws are poised to irk players. Most concerning is the game’s artificial intelligence. Although the title allows players to adjust the awareness threshold of enemies, on any difficulty setting foes tend to act robotically. From failing to notice nearby fallen comrades, abruptly changing demeanor when an alert expires, or leisurely recognizing a player out of cover, soldiers habitually display a lack of common sense. Sniper Elite’s storytelling is a lessor infraction, with lead character Karl Fairburne’s battlefield actions functioning as a better expositional elements than either his cliché-laden voice-over or stylized cutscenes which mimic Ken Burns techniques without replicating the documentarian’s gravitas. 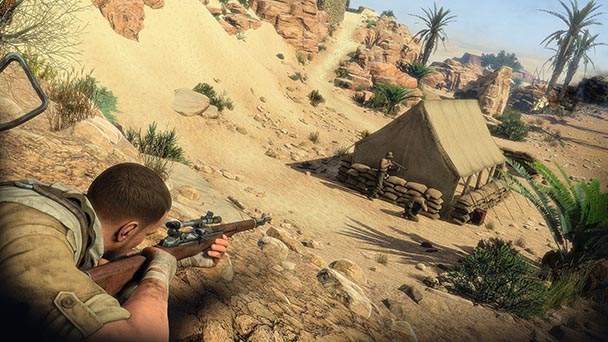 Sniper Elite 3’s shift to the infrequently used North African theatre lends the title a distinctive aesthetic. Deserts and lagoons are intersected by patches of rocks and foliage, which not only give players plenty of places to hide, but establishes a noteworthy visual style that’s highlighted by day/night missions. While Rebellion’s Asura engine pales in comparison to the meticulous detailing exhibited by Crytek, it’s not without its virtues. Slink in the menu system, turn on the v-synch option and Sniper Elite 3 delivers a fluid, untarnished framerate, making the game feel much more responsive than its predecessor. In fact, the only criticism that can be leveled at the game’s graphical delivery is that environments look too clean and tidy, with flora neatly groomed and revealing a bit too much sheen given their desert setting.

It will take most players about eight to ten hours to inch their way through the game’s eight stages, while additional time can be invested in the game’s auxiliary modes. The game’s multiplayer competitions have been designed to promote long-range warfare, with modes such as “No Cross”, where combatants trade far-flung fire across a map divided by two sections. More interesting is the game’s asymmetrical Overwatch mode, which offers one of the best cooperative experiences since Call of Duty’s Spec Ops missions. Here one player acts as spotter, using binoculars to tag and track foes, while the other player must juggle the elimination of targets and keeping their companion safe from danger. 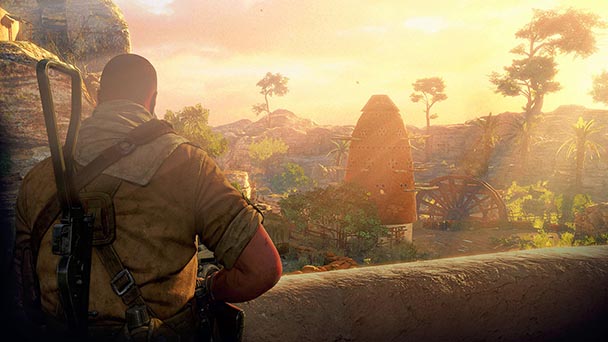 Collectively, Sniper Elite 3 provides just enough substance to warrant its MSRP, then uses the emerging custom of issuing a season pass to extend the experience. While Rebellion didn’t devise the scheme, we can fault them for following suit- the proposition of expecting advance payment for unseen content isn’t a practice we are fond of, especially when it feels like the developer is providing the bare essentials of a sixty dollar experience. The push towards paid content means elements like modding tools for PC players have deliberately been left out of the game.

Abandoning the linear levels and occasionally stilted play of its predecessors, Sniper Elite 3 is the long-range focused game you’ve always wanted to play. Instead of pushing players through narrow hallways filled with distant targets, the title gives gamers an arsenal of gratifying tool and lets them loose to cleave their own bloody path. The big drawback in this otherwise engrossing sniping sandbox is the artificial intelligence of your opponent. Had the third reich been this eccentric in real life, they would have likely occupied padded cells instead of swaths of Europe and North Africa. 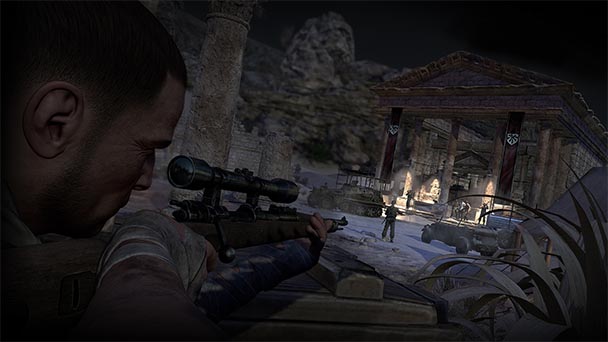 Sniper Elite 3 was played on the Xbox One with review code provided by the publisher.

Sniper Elite 3
Platform: PlayStation 3, PlayStation 4, Xbox 360, Xbox One, PC
Developer: Rebellion
Publisher: 505 Games (Console)/Rebellion (PC)
Release date: July 2nd, 2014
Price at release: $59.99 retail or download
Language(s): English
Sniper Elite 3 Review
Not long ago, the shooter was one of the most visceral and engaging genres around, consistently delivering frantic firefights that outmatched the best summer blockbusters. But over time, those once-invigorating action sequences began to lose their impact, as thrill ride-type spectacle took priority over delivering deep and gratifying play mechanics, at least in the single-player arena. Undoubtedly, Oxford-based developer Rebellion is aware of this dilemma, as their Sniper Elite series has been gradually creeping toward an open-world approach, giving players the tools to produce viscera-splattering mayhem from the shadowy alcoves of World War II battlefields. The developer&rsquo;s previous efforts have&hellip;

Summary : Sniper Elite 3’s autonomous play mechanics are a welcome reprieve from the corridor-based treks which are so prevalent in the shooter market.

Previous: BlazBlue: Chrono Phantasma Review
Next: The Sound of the Monomyth- A rePlay Q&A