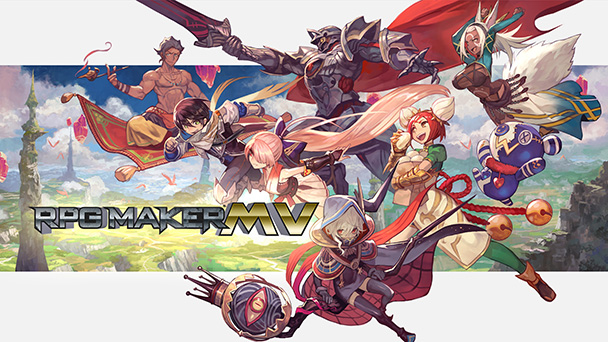 We’ve all dreamed of making out own role-playing game. With RPG Maker MV, Kadokawa provides a capable toolset. There are a few inexcusable issues, but given the applications abilities, budding designers might find them forgivable.

Play through a multitude of role-playing games and you’ll inevitably encounter the clunky combat mechanic, or plot twist you see coming far in advance. Chances are you’ve said to yourself, “I would have done things differently”, before envisioning the kind of changes that wouldn’t have ruptured an otherwise solid sense of immersion.

For nearly thirty years, the RPG Maker series has been letting players fulfill their own adventuring making ambitions. What started as a loosely-bound collection of tools (1992’s RPG Tsukūru Dante 98) has grown into a prevalent franchise that has permitted players to make their own commercial games. From Team GrisGris’ Corpse Party, Freebird Games’ To the Moon, to 773’s Cherry Tree High Comedy Club, RPG Maker is the toolset behind a number of impressive treks. And those are just the bigger names. Steam is packed with efforts crafted by everyday people, all built from different iterations of the development package. 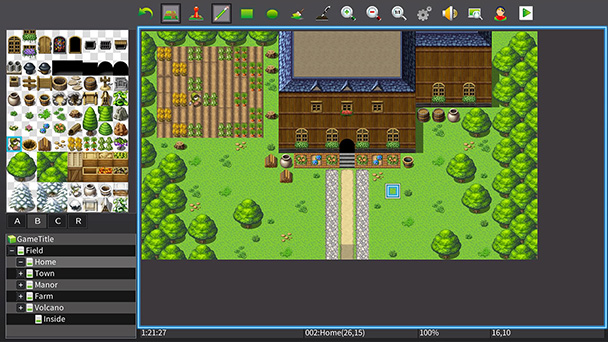 Crafting Dialog in the DMV Line?

Pick up the recent release of RPG Maker MV, and you won’t be able to chase financial success. For that, you’ll need the PC-based counterpart (RPG Maker MV which arrived on Steam in 2015; the latest iteration, MZ, released to mixed reviews). Not only can your handiwork be delivered in a standalone executable file for PC and mobile, but you’ll have much more autonomy. Instead of relying on the game’s pre-made character art, you can create your own sprites, music, sound effects, and tilesets. If you or someone in your development circle has a bit of programming prowess, you can develop custom code, to push the basic framework even further, potentially creating something like Orangeblood.

So why would anyone invest in the Switch version of RPG Maker MV? Portability is one of the key reasons. Even if you own one of those ultralight notebooks, a Switch is still much more transportable piece of hardware. Potentially, you could design dungeon layouts while rising on public transport or test your creation while waiting in line, trimming at least a few pounds from my backpack. Of course, there’s many Switch owners who lack a laptop. The Switch version permits players to access most of the tools with the burden of potentially prohibitive expense. Let’s not talk about the PC components prices during the pandemic. If do you crave additional assets, DLC will be ready to fit that need. 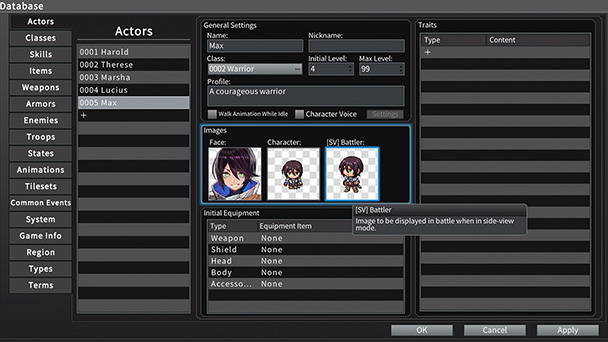 Fortunately, you’re still able to share your adventures with other Switch owners. While you might not be able to sell them, MV, like its 3DS predecessor, RPG Makes Fes, lets anyone download a free application to play these efforts on their Switch. Once that’s installed, they can download and enjoy anyone’s creation, even offline. If you have no interest in purchasing MV, at least check out the player for some complimentary fun. Although Fes arrived rather late in the 3DS’ lifecycle limiting its audience size, there were a multitude of adventures that some people sank their hearts into.

When RPG Maker MV was released on PC, budding designers were met with a rather barebones tutorial. Fortunately, the Switch version offers much more playful and decidedly less detached teachings. Players will alternate between playing an RPG and pausing and adjusting in-game elements to continue. It’s enjoyable enough that you might wish developer Kadokawa doubled down on the idea, offering more instruction in a meta-game format. Certainly, it helps that the dialog is amusingly written and adeptly localized. 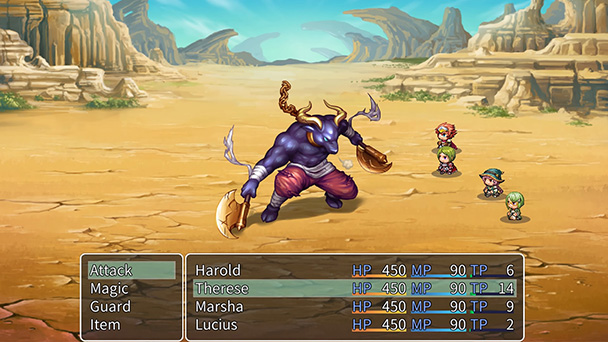 Expectedly, you won’t be creating your magnum opus without learning how to use MV’s multitude of components. Some, like the creation of title screens, characters, maps for town, dungeons, and even providing a name for your currency is relatively straightforward. MV’s most notable improvement over its predecessors is the ability to use layers. Much like Photoshop, this tool permits designers to break composition into digestible pieces (each with their own tileset). As such, it’s exceedingly easy to place a pit on a section of ground tiles, with the application blending the two visual pieces together.

Delve in further and a number of key options can be changed, such as MV’s option for traditional front-view or new side-perspective battles. Most important is the integration of events- which regulate everything from in-game conversation to determining what’s inside a treasure chest. Essentially, Events can be thought of a series of conditional questions, asking where, what, whom, and how a situation is handled. Thankfully, each of these can be tested to ensure functionality, potentially preventing any game-crippling oversights. If hundreds of hours dungeon-crawling hasn’t imparted the benefit of frequent saving, RPG Maker will repeatedly remind you. 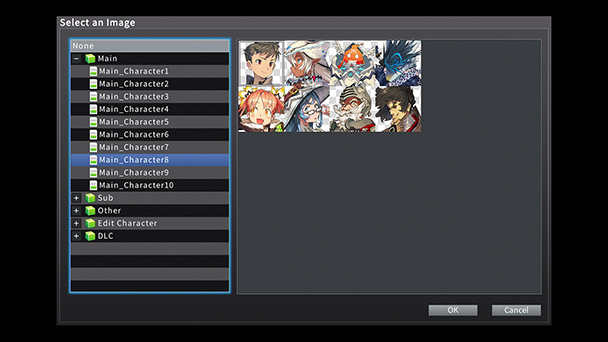 Villains Will Reduce Your Dexterity

Unfortunately, creation isn’t without its issues. Most notable is the occasional unresponsiveness of the app. Quite frequently, the software will stall, and won’t accept any input for up to three seconds. While it’s persistently frustrating and you’ll eventually get used to it, it’s doubly exasperating as you’re working your way through the tutorial. Frequently, I thought I was doing something wrong, but it was just the application presumably loading in the background.

Although MV’s icon-based user interface will eventually become mastered, it would have helped if the application augmented its symbols with a bit of pop-up text to ease the learning process. Finally, text-size can be an issue, especially when using the Switch Lite. Thankfully, you can zoom in and view detail when creating maps, but otherwise menu text is small enough to produce eye-strain. 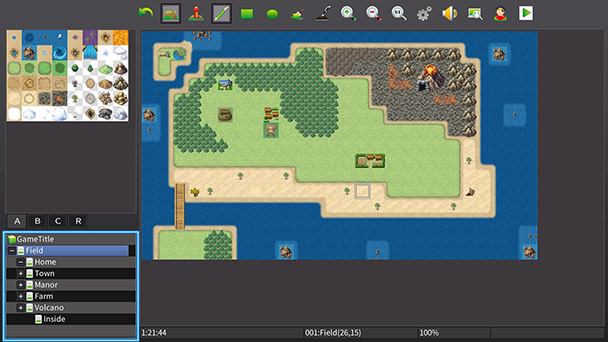 While some of the aforementioned snags are troubling, the Switch version of RPG Maker MV does have its virtues. It has a larger asset pool when compared to the PC version which offered two assets banks. Now, designers can select from Fantasy, Science Fiction, Japanese, Chinese, Arabian, Modern, Steampunk, and Dark Fantasy themes, as well as pull from an inventory of over 170 sample maps. Character portraits, an essential component of any RPG, are robust, with the package offering over 250 bust-ups for use. Layering also comes into play with the character generator, where you can select from sixteen different variables. Arguably, the best part of the package is an option for vocalized music to play during battles. There’s no excuse for anemic boss battles with MV.

Despite some concerns about the responsiveness and accessibility of the user interface, RPG Maker MV lives up to its premise. Following a few days of learning, you can design your very own role-playing game, without learning how to code. The package could use a bit more polish, but the potential can’t really be knocked. 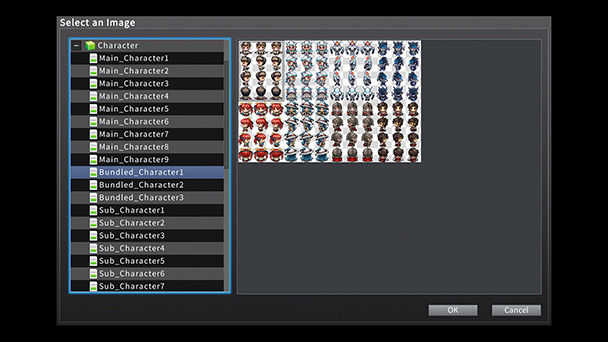 RPG Maker MV was played on Switch with review code provided by the publisher.

RPG Maker MV review
We&rsquo;ve all dreamed of making out own role-playing game. With RPG Maker MV, Kadokawa provides a capable toolset. There are a few inexcusable issues, but given the applications abilities, budding designers might find them forgivable. Play through a multitude of role-playing games and you&rsquo;ll inevitably encounter the clunky combat mechanic, or plot twist you see coming far in advance. Chances are you&rsquo;ve said to yourself,&hellip;

Summary : RPG Maker MV certainly isn’t for everyone. But if you’re ever longed to craft your own adventure and have a surplus of free time, this (along with SmileBASIC 4) can turn your portable console into a robust dev kit.