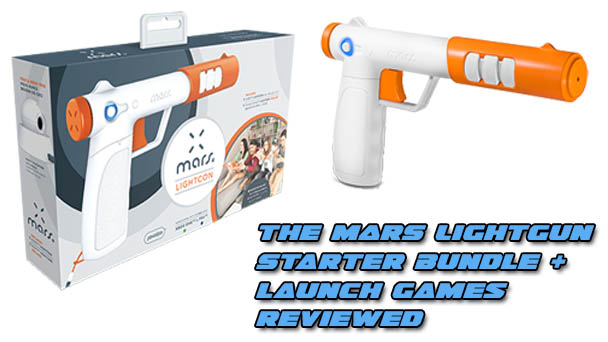 Elevated by engaging games like Duck Hunt, Virtua Cop, Time Crisis, Point Blank, and House of the Dead, light-gun shooters were once a dominant force in the industry. But the technological shift from cathode-ray tube-based televisions to modern flat-panel LCDs, plasma, and OLED displays destabilized the genre. While they’ve been a few efforts that simulated the technology through motion control (with Wii-based titles like Gunblade NY and LA Machineguns, House of the Dead Overkill) popularizing has undoubted waned over the last decade.

Which makes the appearance of PDP MARS lightgun system so promising. At first glance, the company seems poised to resurrect the light-gun shooter, leading with a solid-feeling plastic pistol and accompany camera. The appearance of a trio of titles which accompany the device seems reassuring as well. Anyone who purchased Time Crisis 4 for the PlayStation 3 likely has lingering resentment for the costly, swiftly orphaned Guncon 3.

A Disorderly and Dawdling Set-up Process

Open up the box for the MARS Starter Bundles, and you might assume you’re going to be firing away in minutes. The system’s camera, called the IR Station, connects to one of your console’s USB ports with the included 10-foot cable. But hop into any of the inaugural games and any excitement will quickly be cooled. Part of the issues there’s scant guidance from the peripheral’s in-box leaflet or much on-screen assistance. 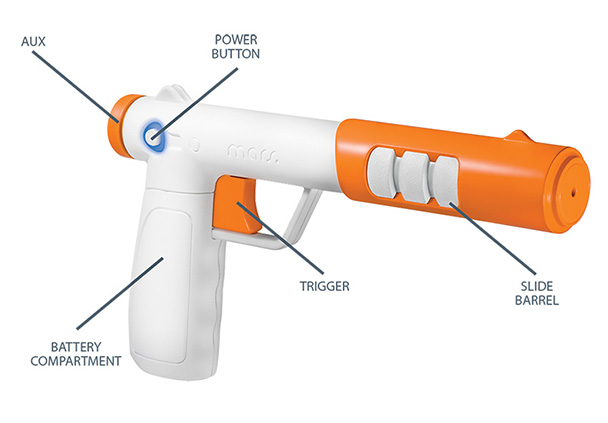 You’re told to point the camera at the television screen, physically adjusting the angle of the lens or rotating the unit in place. What you’re not told is there a specific range for their Station. A prompt tells you to position a cursor over a circular image projected on-screen. But at first, I placed the camera in front of the TV, looking up at the display. It turns out, the minimum distance for the IR Station is the same as your screen size, so if you’re playing on a 60-inch television, it needs to be at least 5 feet away.

After a few minutes of unresponsiveness, I moved the device to the side. Much of the problem was rooted in the polling rate of the peripheral. Habitually, it would take between two and five seconds before any adjustments were reflected onscreen. Even when the camera was fixed on a stationary object, the cursor would enigmatically shrink and grow in size. This was the first indicator that the MARS system might have been rushed out the door to make the holiday season. 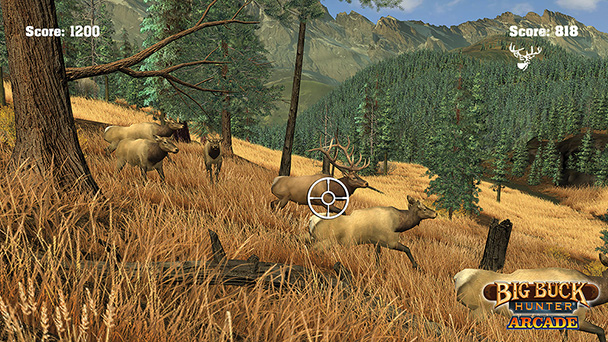 Having some familiarity with Play Mechanix’s franchise, I dove into Big Buck Hunter wanting the calibration process to be a fluke. On the upside, connecting a MARS pistol was painless, and a press of the button on the side of the faux-firearm, it was recognized. Still, the on-screen prompt advising a press of a controller button and lack of any on-screen pictograph called the porting team’s abilities into question.

Those concerns solidified upon attempting to play Big Buck Hunter. Notably, the on-screen used for menu selection lagged horribly. Merely shifting aim from one side of the screen to another demonstrated a delay of more than a second. Heading into the game’s arcade or supplemental modes, the cursor disappears, mimicking the big-gun play of the coin-op. Here, the action was so sluggish I was rarely able to nail any deer, the on-screen depiction of a muzzle flare revealing aiming direction that was often wildly off the mark. Fundamentally, this wrecks the game. Big Buck isn’t about unrestrained shooting but rather necessitates precision as bucks spring across the screen surrounded by does or cows (which you don’t shoot). To further complicate matters, the port of Hunter isn’t competent, with frame-rate sputters further reducing your accuracy. With no more than half-dozen low-poly animals at one time and not many other intensive tasks going on, the lack of fluidity was puzzling. The experience was so frustrating, I played the game’s additional modes, where you shoot moonshine jugs or ducks only out of necessity for this assessment. 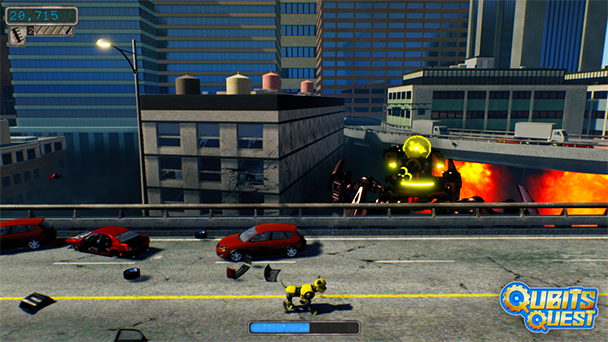 Hoping the experience with Big Buck Hunter was a fluke, I headed into Qubit’s Quest with rekindled enthusiasm, eager for a light-gun game that would provide a modicum of enjoyment. To ensure the first experience wasn’t corrupted by some variable in the environment, I tried a new set up using a different Xbox console and television in another room. Quickly, it was evident that the MARS system was the culprit, with Qubit’s Quest main menu demonstrating the same type of cursor lag that had plagued Hunter.

Seemingly, the developers are aware of the issue and if you head into Qubit’s settings, there’s an option for an on-screen cursor. In execution, this helps play, and I was at least any to assist the game’s mechanical dog in his quest to travel from one side of the stage to another. Interestingly, Qubit’s Quest favors the defensive angle, requiring you take out foes intent on vexing the resolute robo-K9. With hulking robots that fire projectile, you’ll have to target these hazards. But just as importantly, you’ll have to guide Qubit, pressing the button on the back of the MARS pistol to initiate a single or double-jump.

The game seems best suited for multiple players. With friends one person can focus on moving Qubit through the level while anyone else provides covering fire. There’s still lag, and with additional participants it becomes increasingly difficult to keep track of your crosshair amidst the explosions. The game definitely demonstrates a solid concept for a light gun shooter but is also hampered by performance issues.

Will Voyage of the Dead Keep MARS Afloat? 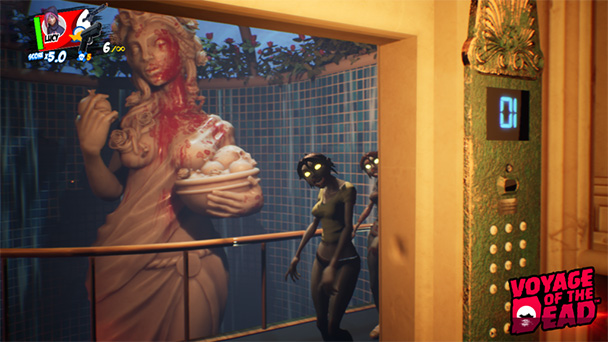 As such, I approached the third game in the MARS launch lineup guardedly. After all, here was a title I was most eager for, a game that mirrored the first-person on-rails blast fests of series like House of the Dead. Built on the fourth iteration of the Unreal Engine, Voyage of the Dead’s certainly outshines Big Buck Hunter’s and Qubit’s visual appeal. Stranded on a resort cruise when disease breaks out, up to four players work together to head-shot the rambling dead while protecting any survivors.

While the game’s introductory voice-over is amusing, with a bit of profanity to complement the game’s bloodletting, Voyage struggles for distinction. Sure, each of the game’s four playable characters have a distinct ability that can be initiated by shooting a translucent object in the background. Voice clips during play attempt to exhibit personality as well, they they’re repeated with earsplitting repetition.

The MARS system’s persistent lag in here, but like Qubit, an on-screen crosshair is used for aiming. Another similarity is that both titles have a healthy number of mini-games extending playtimes, especially for small groups hoping for a bit of competition.

Precision and responsiveness are requisite for any kind of light-gun system. And it’s here that MARS falters, with a polling rate that consistently hovers in the ten to fifteen second range. As such, any software is going to bring about disappoint, with the sluggish response rate restraining both success and enjoyment. While it would be great to see the light-gun shooter receive reinvigoration, there’s the distinct feeling that MARS could push the genre further into obscurity. Even with a deep discount from the Starter Bundle’s hundred-dollar MSRP, you’ll very likely want to avoid MARS.

MARS Lightgun review
Elevated by engaging games like Duck Hunt, Virtua Cop, Time Crisis, Point Blank, and House of the Dead, light-gun shooters were once a dominant force in the industry. But the technological shift from cathode-ray tube-based televisions to modern flat-panel LCDs, plasma, and OLED displays destabilized the genre. While they&rsquo;ve been a few efforts that simulated the technology through motion control (with Wii-based titles like Gunblade NY and LA Machineguns, House of the Dead Overkill) popularizing has undoubted waned over the last decade. Which makes the appearance of PDP MARS lightgun system so promising. At first glance, the company seems poised&hellip;

Summary : The MARS lightgun hardware suffers from so much lag that games feel unresponsive and in the case of Big Buck Hunter, are unplayable.