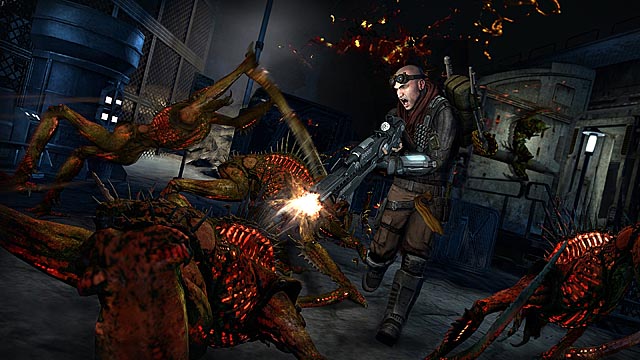 With the cost of producing a high-definition game often breaking the ten million dollar threshold, sequels habitually play it safe. Typically, follow-ups mend a few of their predecessor’s flaws, while prudently avoiding the risk associated with tweaking major game mechanics. Refreshingly, that hasn’t been the case with the Red Faction series, with developer Volition radically altering each subsequent franchise entry. Originally, a linear first-person shooter  elevated by a limited number of destructible environments, successor Red Faction: Guerrilla moved the action to an open environment, embedding the title with a near-limitless possibility for playful pandemonium.

When word spread that the studio was abandoning Guerrilla‘s sandbox stylings for more straightforward adventure, fans became rightfully concerned. Yet, once players immerse themselves in Red Faction: Armageddon’s subterranean setting, they’ll discover that Volition wisely sacrificed a bit of scale for the sake of storyline. Fortunately, the game still delivers enough space for gamers to instigate a storm of spirited destruction. Armageddon wisely understands that shooting foes can be fun, but never as wickedly gratifying as toppling a stack of combustibles atop a swarm of angry antagonists. 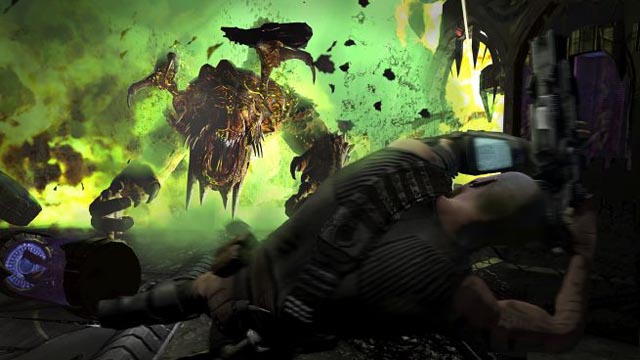 Much of the title’s satisfaction radiates from its arsenal of weapons. Undeniably, Armageddon‘s Magnet gun is the game’s showcase toy, with its ability to create an impromptu field of attraction between two objects. Enemies can be impaled upon stalactites, enormous crates can shred infested nests to pieces, or towers can be brought down with two button presses, endowing gamers with an tremendous  feeling of power. While swarms of enemies can be picked off with the game’s requisite dual pistols, or rifle, it’s more rewarding to eradicate them all at once by creating a spontaneous chasm which swallows them wholesale. In the event that players create an impasse by razing too much of the environment, the game’s Nanoforge tool allows an instant repair; the device is also essential when cover is destroyed by enemy fire.

In an effort to offset Armageddon‘s reoccurring cycle of destruction followed by ammo and item collection, the title includes a number of pleasing vehicular bits. Various-sized mechs, trams, and a particularly frantic excavator ride provide intense sequences which help break up the tedium of navigating caverns on foot. The game’s sole pacing blemish comes when players aren’t given enough environmental object to play with. Fortunately, these are almost always tempered by an area filled with unstable generators, explosive barrels, and precariously balanced structures. 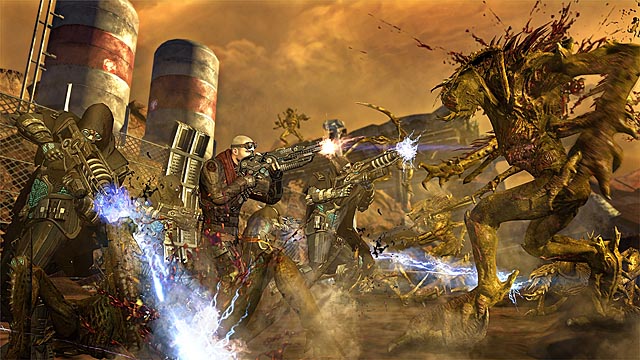 Beyond the game’s collection of satisfying instruments of extermination, Armageddon‘s other virtue is its plotline. With adept voice acting and capable direction, is easy to root for lead protagonist Darius Mason. Despite his archetypical ‘space marine’ appearance, Mason displays a refreshing trace of vulnerability, not unlike Uncharted‘s Nathan Drake. Most importantly, Armageddon‘s developers know to keep the cinematics succinct, as to not impede the cadence of the game’s action. With the option to take your unlocked arsenal into the title’s “new game plus” mode, the game’s cutscenes offer the option to be skipped as well.

Beyond Armageddon‘s main campaign, the title offers two supplemental diversions.  Ruin mode tasks players with using their artillery to wreck mass destruction to a sub-area, within a minute time frame. Given that the game’s naturalistic physics system, similar attempts can have widely different results, adding to the Ruin’s  fun factor. Meanwhile Infestation mode is the title’s sole multiplayer component, tasking a team of up to four online participants with repelling intensifying waves of foes. Although most maps compel survival, others necessitate the defense of a structure against attack. 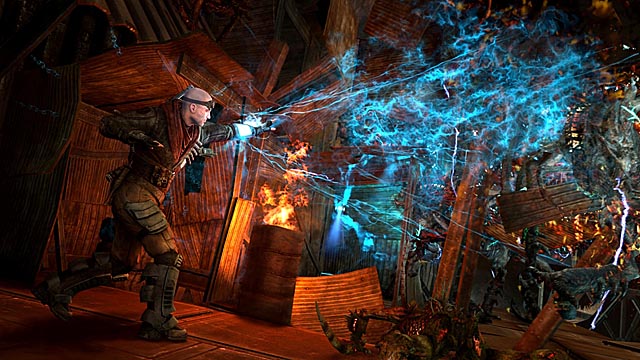 Although Red Faction: Armageddon‘s relocation to closed environments might seem like an imprudent decision, the game’s playful destruction and agreeable narrative shine through. By being able to decimate the environment as well an enemies, the title has an distinct edge over its competition, lifting the title to must play status by action-game aficionados.

Previous: New Releases for the Week of June 19th, 2011
Next: Best of E3- The Elder Scrolls V: Skyrim