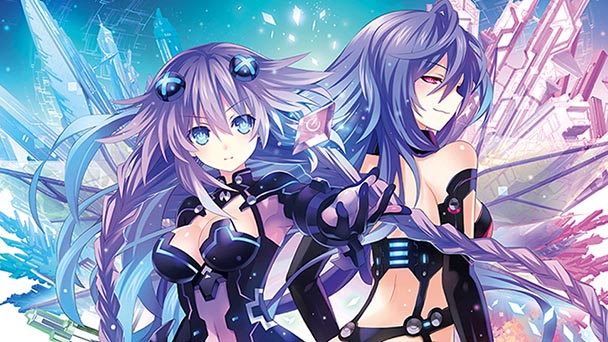 When NIS America published Hyperdimension Neptunia in 2011, the title was an unmistakably mixed bag. In concept, the game’s allegory of anthropomorphized gaming machines reconciling their differences to fight a common enemy was one of role-playing’s most creative themes. Yet, once players attempted to immerse themselves in Gamindustri’s tribulations, they faced an array of clunky design decisions. From the inability to directly control the use of healing and status-curing items, oft-monotonous dungeon crawls, to the abysmal framerate exhibited when exploring, co-developers Idea Factory and Compile Heart seemed content to sully the series’ moe-motivated charms.

But gradually, Neptune and her console compatriots endured, mending many transgressions across two subsequent PlayStation 3 titles- Hyperdimension Neptunia Mk2 and Hyperdimension Neptunia Victory. Unsurprisingly, the improvements were met with critical and commercial enthusiasm, prompting Idea Factory to deliver a series of definitive remakes on the PS Vita, and even launch a U.S.-based office, so they could publish the title themselves. As a remake of Victory– a game that once excised many of the issues with first Neptunia game, Hyperdimension Neptunia Re;Birth3: V Generation faces an uphill battle, striving to improve upon an already solid successor. Largely, the title does an admirable job, extending an expedition that will please Victory veterans, rekindle the Re;Birth series’ charms for PS Vita owners, as well as welcome newcomers to the franchise. 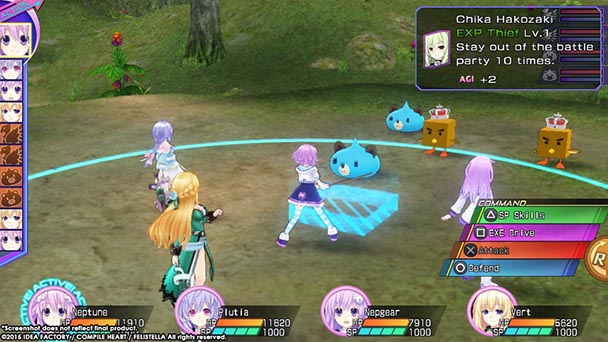 Initially, Re;Birth3’s plotline appears to be a continuation of the events from its predecessor, as the franchise’s four clashing characters carry on their archetypal bickering. For gamers who haven’t played previous installments, the intended representations are apparent- with the game providing both allusional names as well as semiotic identifiers. There’s Neptune- the title’s core protagonist, who represents SEGA’s canceled hardware platform. As such, she’s perpetually placed at a disadvantage, especially during boss battles, where she perpetually serves as cannon fodder. The emerald and ivory colored Vert signifies the Xbox 360, providing comic fodder about her busty size as well as Microsoft’s botched ambitions to compete within the Japanese gaming market. Rounding out the contenders are the calculating Noire and traditionalist Blanc- who embody Sony and Nintendo’s platforms respectively. Mk2/Re;Birth2 introduced the little sisters, representing the industry’s handheld hardware. There’re back here, although their older sibling receive the spotlight once more.

While the storyline covers the same broad arc as Victory, Re;Birth3 introduces a number of additions throughout its chapter-driven journey. New instances of dialog preserve the series’ proclivity for self-referential humor, with riffs on everything from the Oculus Rift to the Sony hacking debacle. Undoubtedly, a knowledge of game history pays dividends with the Neptunia games- an axiom that remains true with Re;Birth3, as players plumb a alterative version of Gamindustri set in 1989. The one slight disappointment is the shortage of jokes surrounding the context. Given the Reagan-era backdrop, a few more references to classic gaming would have been welcome. 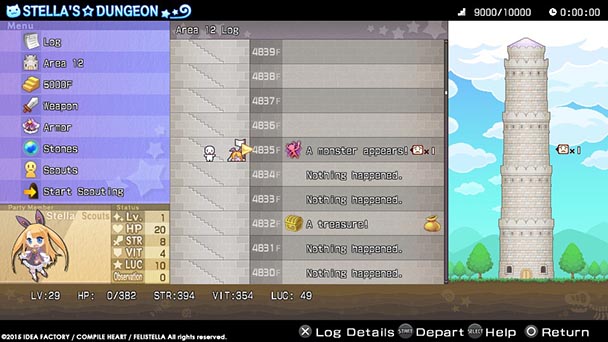 Stella’s Dungeon, a real-time mini-game where players send the eponymous protagonist on autonomous missions is back. The diversion offers the only way to view V Generation’s ‘true’ ending, pushing players into become a successful manager for the minion. This time out Stella is able to enlist the help of other characters, who are able to enlist their own distinctive skills as the explorer attempts to collect gear that the players can use to augment their own adventuring party.

Although stronger equipment likely won’t be needed against dungeon creatures culled from gaming history, these items are indispensable against Re;Birth3’s intimidating bosses. Largely, the game’s ordinary opponents serve as grind fodder, allowing for team members to quickly level up. But the game’s supreme baddies, with the inclination for health generation, are V Generation’s most daunting challenges, able to quickly shut down any team that hasn’t invested extra time leveling up their team. Often enduring over half an hour, these trials exceed the expected time span of a portable title. Twice, we had to recharge the Vita in the middle of a heated showdown. 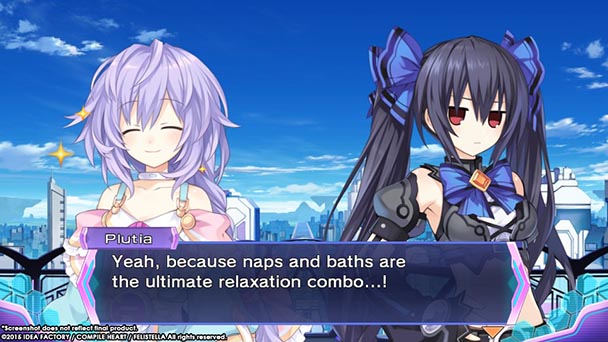 Fundamentally, combat doesn’t deviate far from the series’ preceding mechanics, with players moving party members around a circular field. Connected to the class-uninhibited heroines are hit boxes whose size relate the power of the character’s weapon; position a character just right and multiple enemies can be assaulted in a single, satisfying strike. The other core variable facing gamers is the use of three different types of attacks. Rush extends multiple hits, Heavy offers robust HP-depleting damage, while Breaks whittle away at a foe’s defense- offering the opportunity for devastating damage against an vulnerable enemy. Enjoyment stems from determining the effectiveness of different combinations against the game’s collection of adversaries. New to Re;Birth3 is the elimination of the EXE gauge, with finishing moves and HDD transformations tied to your amount of SP. Also new, is the ability to glean a fifth combo hit, giving a diminutive advantage over enemies.

Small additions like stat bonuses for in-game challenges are a gratifying perk- rewarding player achievements such as not taking damage across multiple encounters. Cleverly, Re;Birth3 keeps conflict interesting, using brief tutorial to explain each additional nuance that the game adds to its battle system. Equally as satisfying is the movement toward quicker clashes with scuffles against normal opponents typically completed in a few turns. As with previous games, occasionally you’ll need to scour dungeons for hidden items. Thankfully, the Treasure Search ability helps here, sending out a ping that will signpost the position of nearby collectables. 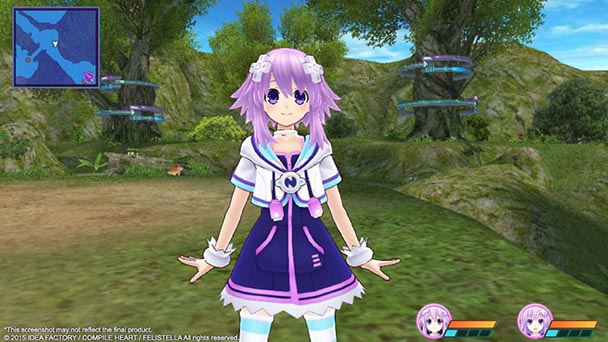 Visually, Re;Birth3 carries on the competence of the Neptunia remakes. Nearly eliminated are most of the dodgy framerates that plagued the original games, with only a drop in fluidity during boss battles. Character portraits and CGs remain as charming as ever, with the cast exhibiting eye-enchanting expressions and animations. On the downside, V Generation employs a bit of asset recycling, so you’ll revisit music and milieus from the previous game. Sonically, the game offered voice acting in both English and Japanese, with the latter in the form of a free PlayStation Store download.

Although Hyperdimension Neptunia Re;Birth3: V Generation is a bit shorter that the two previous remakes, there’s no certainly shortage of fun or fan-service here. Given the game’s protracted boss battles, there’s nearly a work-week’s worth of content to venture through. Players who toy with the title’s Plan system can extend that duration even longer, as they are able to tweak a number of elements in the game, from enemy difficulty to dungeon layouts. In the same way that Purple Heart shuns Neptune’s klutzy conduct and becomes a capable fighting machine, Re;Birth3 is an awe-inspiring transformation- and one that any franchise fan will want in their Vita library. 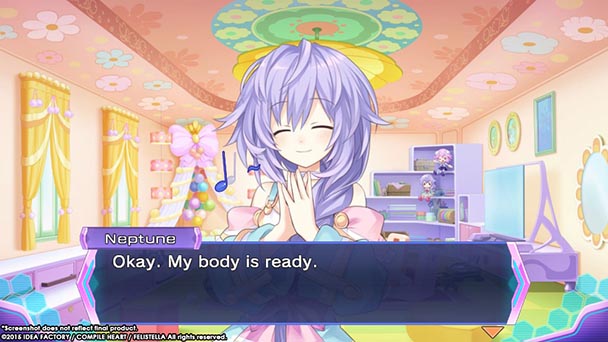 Hyperdimension Neptunia Re;Birth3: V Generation was played on the PS Vita with review code provided by the publisher.

Hyperdimension Neptunia Re;Birth3: V Generation
Platform: PS Vita
Developers: Idea Factory, Compile Heart, Felistella
Publisher: Idea Factory International
Release date: June 30th, 2015 (US)
Price: $39.99 via retail or through the PlayStation Store
Language(s): English/Japanese voice, English/Japanese text
ESRB: Teen
Hyperdimension Neptunia Re;Birth3: V Generation
When NIS America published Hyperdimension Neptunia in 2011, the title was an unmistakably mixed bag. In concept, the game&rsquo;s allegory of anthropomorphized gaming machines reconciling their differences to fight a common enemy was one of role-playing&rsquo;s most creative themes. Yet, once players attempted to immerse themselves in Gamindustri&rsquo;s tribulations, they faced an array of clunky design decisions. From the inability to directly control the use of healing and status-curing items, oft-monotonous dungeon crawls, to the abysmal framerate exhibited when exploring, co-developers Idea Factory and Compile Heart seemed content to sully the series&rsquo; moe-motivated charms. But gradually, Neptune and her console&hellip;