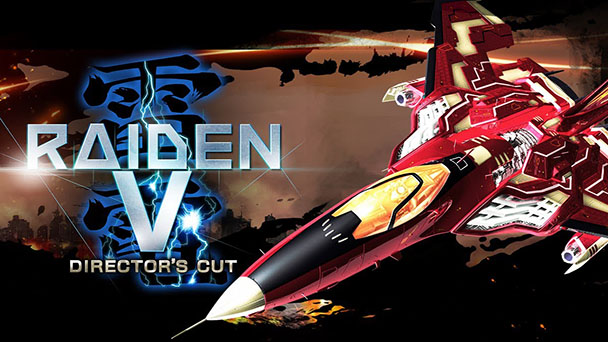 In the shoot-‘em-up pantheon, every prodigious title has a distinguishing play mechanic. R-Type is built around a fascinating risk/reward where players can augment their offensive output by abstaining from fire, accumulating energy in their wave cannon. Players who are able refrain for a full minute, after weaving through torrential storms of enemy shot, are rewarded with the Giga Wave Cannon- an assault capable of annihilating every on-screen foe. Radiant Silvergun resists convention by shirking power-ups and giving players a collection of seven permutations of weaponry, each effective against certain adversaries.

Raiden II’s contribution to the annals of arcade history is the Plasma Beam. When players hold the fire button down, their ship summons a brilliant purple ray that would encircle opponents, stripping their prey of energy, like some sort of cosmic python. Indeed, watching the Plasma Beam spasm, surround, and devastate opponents was entrancing. Unsurprisingly, the emblematic weapon has remained in Raiden, separating the series from the rest of the shmup world. 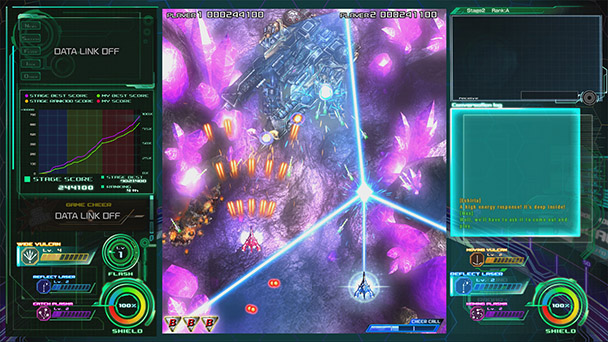 The release of Raiden V: Director’s Cut for the Switch obviously includes the Plasma Beam, along with the Vulcan shot which spreads orange shot, or the Laser, which contributes a piercing ray of perilous blue light. Pleasingly, that’s not the entire span of your arsenal, with the title extending a trio of different ship types, each with their own balance of attack strength, armor, and agility, as well as an idiosyncratic sub-weapon.

Additionally, each of the weapon types have three own selectable styles. You can opt for a Swing Vulcan where you have a bit of control over your outpour of bullets or a Catch Plasma that leeches from foes via multiple arms. As such, there’s a lot of different ways to approach Moss’ vertically-scrolling shooter, with the title allowing players to discover what weapons complement their play style. 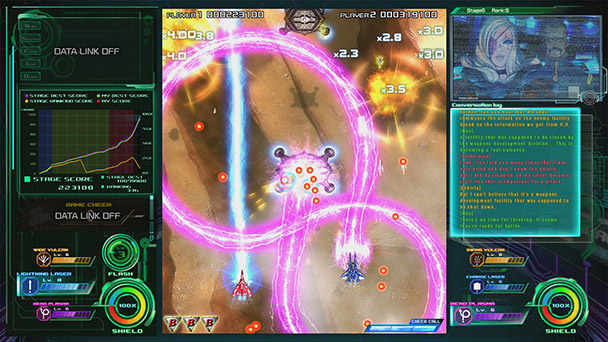 Unsurprisingly, the Director’s Cut of Raiden V weaves in many of the augmentations of past iterations. There’s the Flash Point scoring system, where the rapid dispatch of enemies escalates a multiplayer, incentivizing fast and precarious play. The mechanic is complemented by the combo system, where gamers are goaded to pick off the occasional subordinates when confronting tougher foes, as to not suspend the enemy slaughter.

The Cheer system from the vanilla version of Raiden V returns, but its ambition is suppressed by the current size of the Steam player base. In theory, it’s supposed to simulate the boost of encouragement from onlookers at an arcade. When others are playing online you’ll receive periodic updates of their success. A button press conveys approval, gradually filling up a meter that extends the possibility of temporarily repealing enemy bullets and powering up weapons. But a scarcity of online participants means that receiving a single cheer feels as euphoric as winning an instant prize on a lottery scratcher. 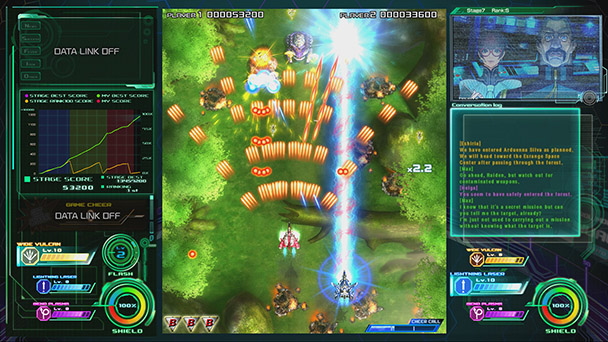 A Handful of Extras

For those who already own the original iteration of Raiden V, this Director’s Cut contributes a few extras. Expanding the game’s eight-stage, branching campaign, there are two bonus levels, which weave in two new boss battles. While they make for an agreeable inclusion, Raiden is one of the few shmups where peril is present throughout the entire level, not just the concluding showdowns. Throughout stages, slow-moving patterns of bullets known as danmaku are replaced with swift enemy shot, forcing adaptive play. Complicating things are the similar coloring of bullets and collectable medals, which has the potential to displease players. While the original release of Raiden V omitted co-operative play, the Director’s Cut incorporates the component, extending a stimulating option for local players.

Aesthetically, the title excels with richly detailed backdrops that outstrip the quality of most shmups. While Raiden V attempts to inject a storyline to drive the action, lackluster English acting and the absence of the original Japanese voice-over undermines the experience. On the upside, the game’s amount of on-screen data is captivating, with everything from character portraits, weapon levels, to switchable stat windows. Much of these are crammed on the borders on the screen, so if you’re playing in handheld mode, most of the text and data is almost impossible to see. Not that you’d have many opportunities to peek at the periphery- save for the lowest two difficulty settings, you’ll needs eyes on the main window at all times. Certainly, the absence of a tate mode is going to dishearten a portion of the title’s audience. 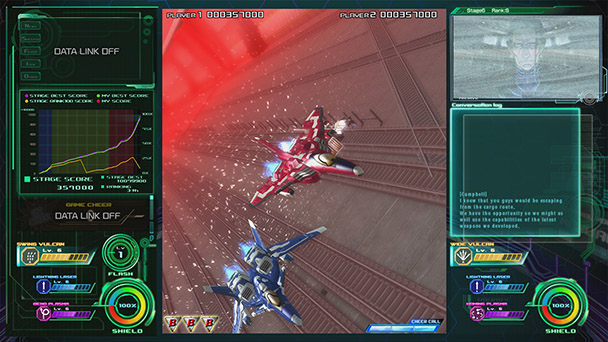 A Great Shooter, Lessened by a Few Uneasy Decisions

The term ‘director’s cut’ signals a work of uncompromised vision. With the inclusion of two new stages and a co-operative play, this release of Raiden V certainty improves on the original Xbox One iteration. Yet, the lack of the game’s original voice acting and the decision to color bullets and medals similarly, mean the title isn’t definitive. While these are minor transgressions in an otherwise outstanding package, shmup fans are notoriously critical. Let’s hope publisher UFO Interactive listens to the fanbase, allowing Raiden V to unconditionally succeed on its ambitions.

Raiden V: Director’s Cut was played on the
Switch with review code provided by the publisher.

Raiden V: Director’s Cut (Switch) review
In the shoot-&lsquo;em-up pantheon, every prodigious title has a distinguishing play mechanic.&nbsp;R-Type&nbsp;is built around a fascinating risk/reward where players can augment their offensive output by abstaining from fire, accumulating energy in their wave cannon. Players who are able refrain for a full minute, after weaving through torrential storms of enemy shot, are rewarded with the Giga Wave Cannon- an assault capable of annihilating every on-screen foe.&nbsp;Radiant Silvergun&nbsp;resists convention by shirking power-ups and giving players a collection of seven permutations of weaponry, each effective against certain adversaries. Raiden II&rsquo;s contribution to the annals of arcade history is the Plasma Beam. When&hellip;

Summary : With a wide array of difficulty settings, ship and weapon options, and a new co-operative mode, Raiden V: Director's Cut deserves a place in the library of every fervent shoot-‘em-up fan, especially if some minor tweaks are made.