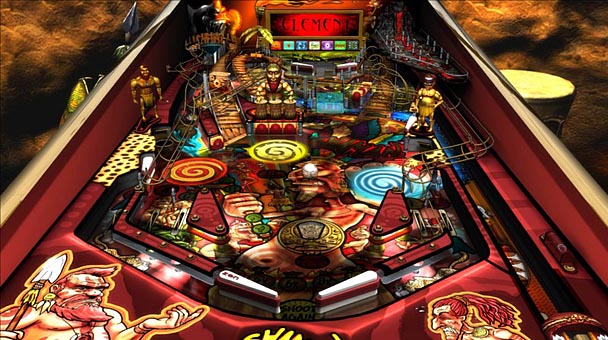 No doubt aficionados of all things pinball are already shaking their heads. “Pinball FX 2? You’re reviewing a three-year-old game!” To that I say: “Ah, but it hasn’t been released on Steam yet. When I played that preview version, the leaderboards were a ghost town. Only for you, dear readers, would I wander into such a wasteland.” Which would, I hope, make the pinball guy nod his head sagely and leave me alone.

Given that Pinball FX 2 was released for the 360 three years ago, and for Windows 8 late last year, the pinball guy has probably already played it many times over. You can find reviews for it all over the internet; here are two finely–crafted examples from our very own Robert Allen. As such, this one is probably a bit dated. 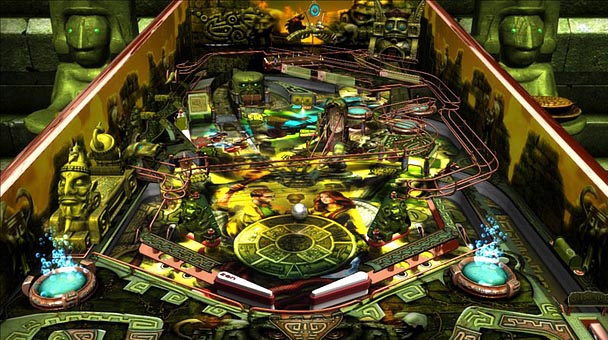 I have a confession to make. I’m not quite a pinball virgin – I played virtual pinball once in the ‘90s! – but the difference hardly matters. Playing this has been quite the experience. “What’s a kickback?” I whispered when one was first mentioned. Wikipedia says that “skilled players can also hold a ball in place with the flipper”. I’ve done that! Am I skilled now? But after many hours of play I start to get it. I’m no pinball master, and I’m sure my leaderboard scores will sink to the middle pages soon, but I still scored 15 million points that one time.

Silly as this all is, there’s a serious point. When I started playing, I knew nothing about pinball. But thanks to the game’s brief but friendly “How to play” screen, and their extensive manuals for each table – “shoot this ramp to get this bonus, unlock missions by hitting this thing, skillshots are so and so” – it was easy to load up a table and start hitting some flippers. For you pinball people out there this must seem pointless, but bear in mind: this game is already available on Xbox and Windows. So what does this Steam release bring to the table? The answer is, of course: a massive player-base. Steam is often seen as a gaming holy grail, overflowing with consumers. There are apparently people on Steam who only buy games from Steam; for them, a game doesn’t exist if it’s not on the Steam store. 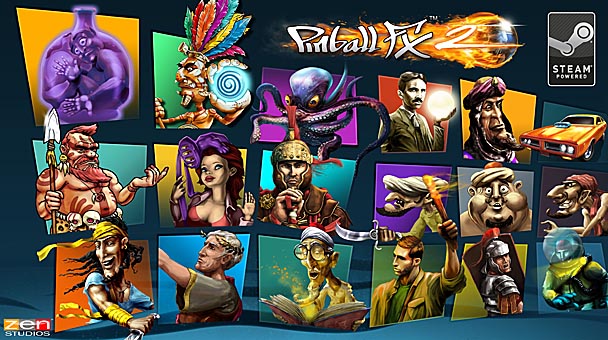 So for this release to be a success it has to be welcoming to newcomers, to bring in all those lovely money-shedding Steam users – but it still has to respect its core audience by making the tables satisfyingly tricky and deep. A difficult task, but one that Pinball FX 2 pulls off effortlessly. There are so many secrets, so many unlockable missions and challenges and mini-arenas that you could play a table for hours and still, I suspect, not see everything. With the social features and leaderboards built in it’ll be far, far too easy to sink many hours into this thing. But less experienced players don’t have to jump in at the deep end. You can have fun just knocking balls around and trying to beat your own high-score, and occasionally you’ll be delighted when one of those secrets turns up and you have no idea how you made the Green Goblin fly across the screen.

It’s also a treat just to look at the tables. They’re adapted to their themes beautifully with flashing lights and arrows that mimic a physical machine. Their Star Wars tables use lightsabers to move the balls around; “Secrets of the Deep” has a cute little periscope that scoops up the ball; the “Rome” table has onagers (catapults, for those who haven’t played Total War) that unlock a siege minigame. The colour-schemes are fantastic, giving each table a different feel before you even pull the plunger; Iron Man’s table is resplendent, decked out in brilliant red and gold with lightning-blue flashing lights. The whole thing hangs together beautifully, and was clearly a labour of love. The voice acting for the earlier tables isn’t great – Nikolai Tesla and the “Doiv doiv doiv!” cockney sailor both sound rather odd – but improves to Hollywood standard for the Hollywood licenses, to brilliant effect. 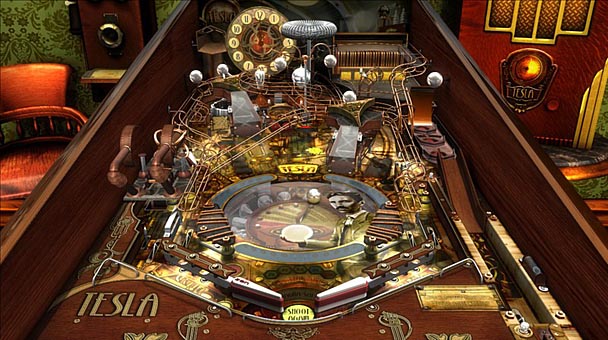 Pinball FX 2 isn’t a game so much as a pinball table platform. You can download the game for free, but to play anything you’ll need to buy table packs. They’re $10 each and all contain four tables (except for the Star Wars pack, which has only three, but is brilliant anyway). The first two packs, Zen Classics and Core, are pretty straightforward: they most closely resemble physical machines. There’s an Indiana Jones-esque “El Dorado” table, all overgrown ruins and stone idols; there’s “Secrets of the Deep”, featuring miniature submarines and leaking hulls; there’s “Biolab”, whose main attraction is a mad-scientist-type vat with a creature inside it. Hit the vat to swap the creature’s head, torso or legs; hit it enough times and you can upgrade its muscles, reflex, brain or wisdom. But my personal favourite is “Tesla”, a steampunk wonderland filled with glimmering brass and vacuum tubes on inlaid wood. They’re loving re-imaginings of what a physical pinball table would look like if the designer had limitless time, money and ability. Sometimes it’s hard to tell you’re playing on a screen: there isn’t a rough edge in sight.

But the later tables go even further. These are all licensed: three from Marvel, one from Star Wars. These are well-themed too: on the “Avengers” table you pick which Avenger (ie. ball) to launch, each one giving you a different bonus. It’s wonderful watching the Hulk ball shout “SMASH!” as it knocks into a bumper and nets you an enormous bonus. While the earlier tables pushed for a certain level of realism, the later ones have a blast ignoring it altogether. Now we have a host of characters standing or floating over the playzone. Play the “Spider Man” table and you’ll see Doc Ock glowering over you, his metal tentacles snapping at the ball. At the “Wolverine” table, you get extra points if you hit the Sentinel’s stomping purple foot. This can be thrilling – it’s great to see Hulk battling Thor and trying to influence the fight – but it’s often hilarious, in the best way possible. My favourite is the moment you score shamefully on the X-Men table: Charles Xavier turns to you with an expression that says “That was it? Were you even trying?” I’m truly sorry, Charles. I’ll do better next time. Or play “Infinity Gauntlet” to hear a priceless opening speech: “Greetings, hero – yes, you! Prepare thyself for battle most fierce and awesome.” Yes, Mr. Warlock. It is most awesome. 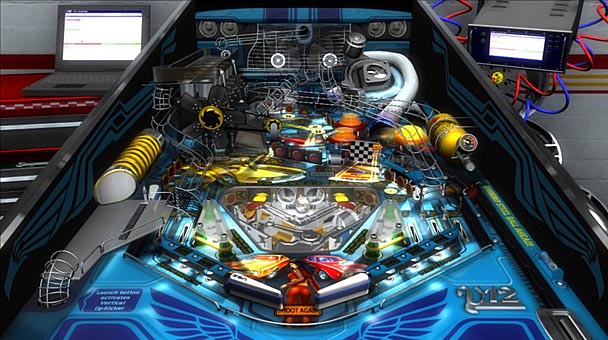 Are four of these tables worth $10? Yes, definitely – but you’ll probably have an idea which you’d prefer by now. If you like the sound of heavily licensed tables, mini-missions from films and comics, character voice-overs and an experience saturated with the sights and sounds of well-known IPs, you should get a Star Wars or Marvel pack; ideally go for a theme you’re familiar with, since the appeal is in seeing established characters in pinball form. If you’re more of a diehard pinball fan you might prefer the original tables for their sort-of-realistic aesthetic, but I personally had less fun on those ones. And if you’re a diehard pinball fan you’ve probably already bought them anyway. In any case, though, there are trial versions of each pack available. If you have some free time I heartily suggest giving them a try, even – no, especially if you’re a pinball novice: I was too, and had an absolute blast.

Pinball FX 2 PC Review
No doubt aficionados of all things pinball are already shaking their heads. &ldquo;Pinball FX 2? You&rsquo;re reviewing a three-year-old game!&rdquo; To that I say: &ldquo;Ah, but it hasn&rsquo;t been released on Steam yet. When I played that preview version, the leaderboards were a ghost town. Only for you, dear readers, would I wander into such a wasteland.&rdquo; Which would, I hope, make the pinball guy nod his head sagely and leave me alone. Given that Pinball FX 2 was released for the 360 three years ago, and for Windows 8 late last year, the pinball guy has probably already played&hellip;

Summary : An explosion of aesthetic goodness and scoring mayhem, with themed tables that are more than just re-skins. Accessible for new players and with enough missions and challenges to keep dedicated pinballers occupied.

Are games art? Just what is "Indie"? How many crunching developers does it take to change a lightbulb? These are just some of the many questions that James Patton really doesn't care about, because life's too short and he'd rather replay "Symphony of the Night".