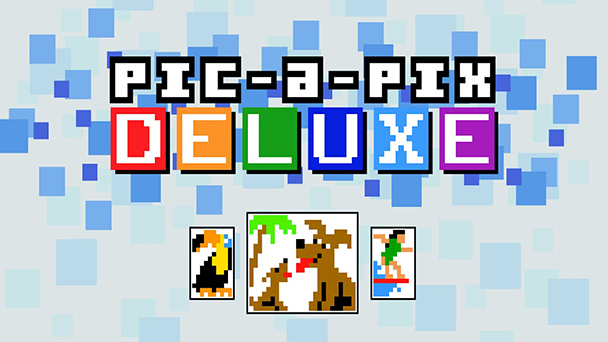 Picross (a portmanteau for ‘Picture Crossword’) games haven’t always enjoyed Stateside success. When Nintendo’s nonogram-based puzzler, Mario’s Picross, was released for the Game Boy in 1995, the title met with middling reviews from respected outlets like Electronic Gaming Monthly and GamePro. Commercially, the game fared no better, prompting Picross games to remain in Japan for the next twelve years. But eventually, the West warmed up to the logic puzzles, prompting a procession of Picross games from Nintendo as well as a multitude of copies from third-party developers.

Although the Nintendo Switch already has Picross S, the system could use another nonogram game- especially one that supports touch-based interaction. Despite an undistinguished visual delivery, the release of Pic-a-Pix Deluxe fits that bill nicely, offering three hundred puzzles for an affordable price. Mostly importantly, the title provides touchscreen support in undocked mode. 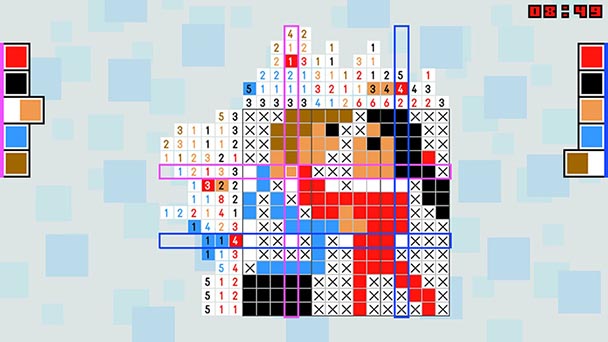 Like most Picross titles, Pic-a-Pix Deluxe’s brainteasers are based on grids that range from 5×5 matrices to 35×25 monstrosities. Numbers that flank the grids’ axes reveal the number of consecutive blocks in columns or rows. So, a “4 – 4” indicates two bands of four blocks that are separated by at one or more spaces. For the game’s 150 black-and-white puzzles, these clues become the foundation for gradually filling in each puzzle. But for the 150 color puzzles, things get trickier. Here, a “4 – 4” indicates two four space stretches of different colored blocks, which may or may not have a block between them.

Soon, you’ll learn that solving a puzzle requires deductive reasoning, often cross-refencing the vertical and horizontal axis to gradually fill in the grid, and systematically making marks to indicate blank squares. Like any nonogram games, guessing can get you into trouble, and it’s best to constantly reassess the periphery of the puzzle with your newly corroborated markings. 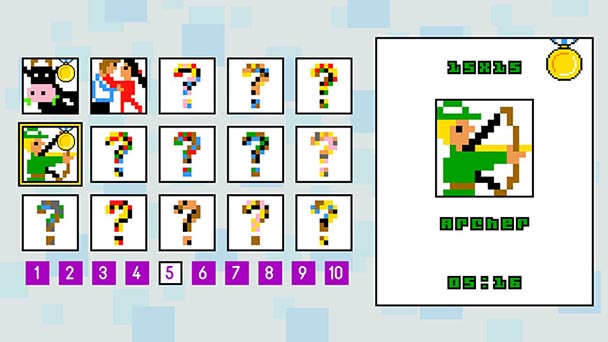 Fortunately, there’s a generous help system help system in place for those who need assistance. A ‘Fix’ option can tell you the number of errors with the puzzle, letting you know how far you are from finding the solution. Double down on the support, and the game can automatically correct any errantly coded blocks. If you’re really stymied you can tentatively color in any squares, apply the ‘fix’ option, and eventually unveil the answer. But doing this will not provide you with a medal for the puzzle, pushing perfectionists back into the problem.

Visually, Pic-a-Pix Deluxe adopts a workmanlike approach. Grids are easy to read, and with a muted backdrop, are easy on the eye for long periods of time, while the game’s font recalls the typeface used by eight-bit games. As the game is an indie title, puzzles solutions lack familiar characters, offering pixelated renditions of common objects. Sonically, Deluxe opts for chiptune soundtrack, that matches the retro aesthetics. It tends to repeat, so players might want to reduce the volume across protracted play sessions. 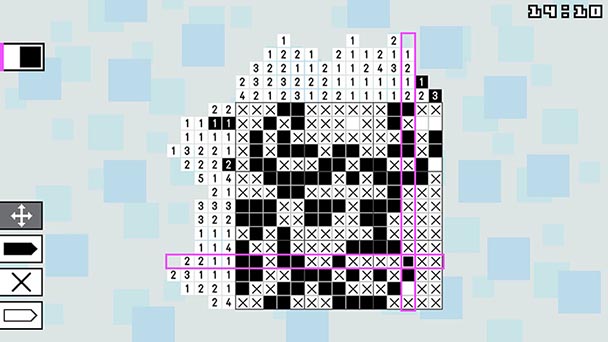 Beyond a ten-page in-game instruction manual, Deluxe also imparts wisdom through its gradual learning curve. Progress through the game in sequential fashion and you’ll tackle straightforward 5×5 puzzles before moving onto large ones. But pleasingly, there’s no rigid trajectory or unlocking of stages, allowing advanced Picross players to head right into the 35×25 brainbusters.

With the Switch undocked, players can take advantage of the system’s touchscreen functionality, which works well for the smaller puzzles. Once the grids increase in complexity, larger digits might have an issue with accuracy, a problem that’s exasperated by the game’s tendency to introduce a bit of lag on the largest conundrums. Alternatively, players can use the trigger on the Joy-Cons to cycle between colors, before painting boxes appropriately. Interestingly, the game also includes a multiplayer component where participants can work together to solve a nonogram. Unless there’s close cooperation between players, cooperative puzzle solving turns into a chaotic but minorly entertaining affair. 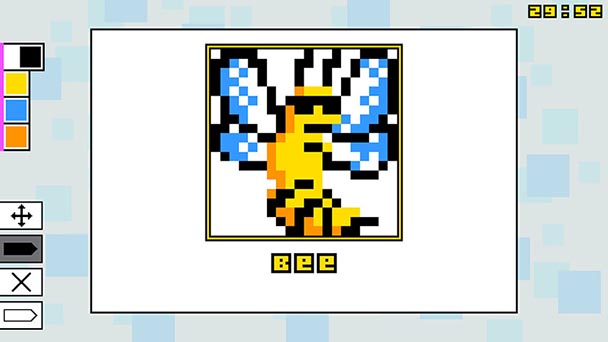 Unsurprisingly, a purchase of Pic-a-Pix Deluxe hinges on a player’s partiality for nonograms. For those who appreciate Picross-style puzzles, having the title in internal memory makes for an engaging recreation that’s an ideal respite between sessions of intense action games. While Deluxe might lack the iconic visuals of Nintendo’s offerings, it wins points for affordability and beating the publisher out the game.

Pic-a-Pix Deluxe was played on the Nintendo Switch
with review code provided by the publisher.

Pic-a-Pix Deluxe
Platform: Nintendo Switch
Developer: Lightwood Games
Publisher: Lightwood Games (US), Rainy Frog (JP)
Release date: January 4th, 2018
Price: $7.99 via Nintendo eShop
Pic-a-Pix Deluxe review
Picross (a portmanteau for &lsquo;Picture Crossword&rsquo;) games haven&rsquo;t always enjoyed Stateside success. When Nintendo&rsquo;s nonogram-based puzzler, Mario&rsquo;s Picross, was released for the Game Boy in 1995, the title met with middling reviews from respected outlets like Electronic Gaming Monthly and GamePro. Commercially, the game fared no better, prompting Picross games to remain in Japan for the next twelve years. But eventually, the West warmed up to the logic puzzles, prompting a procession of Picross games from Nintendo as well as a multitude of copies from third-party developers. Although the Nintendo Switch already has Picross S, the system could use another&hellip;

Summary : Pic-a-Pix Deluxe worst offense is a utilitarian approach to aesthetics, with retro visuals and sound that divulge an indie pedigree. But look past the superficial and the title provides an affordable route to 300 of these brain-busting puzzles.