Pac-Man and the Ghostly Adventures Review 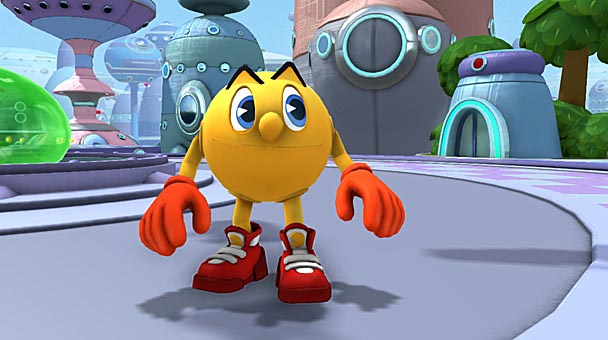 Amidst the twilight of the past millennium, the three-dimensional, mascot-driven platformer was undoubtedly the genre du jour. It was an age when personalities such as Bubsy, Gex, Rayman, and Mario made the leap from sprites to polygons, while a throng of new hopefuls like Croc, Jersey Devil, Bug, Spyro, and Blasto were trusted with establishing fresh franchises. In retrospect, these games were delightfully simple- typically tasking players with uncomplicated platforming, combat and item collection. Although technological advances added nuance in the ensuing years, popularity for the 3D platformer gradually waned.

The recent release of Pac-Man and the Ghostly Adventures for the Xbox 360, PlayStation 3, WII U, PC and Nintendo 3DS is a satisfying reminder of that halycon era. Based on Disney XD’s computer-animated series of the same name, the title shirks a majority of Pac’s precepts. As such, players shouldn’t expect to lead the canary-color protagonist through glowing labyrinths (for that type of game, check out Pac-Man CE DX+) or be pressured by persistently pursuing ghosts. Instead, the game is an amazingly adept interpretation of its source material. 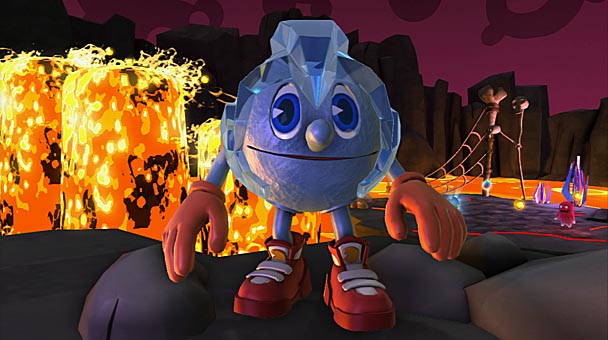 Ghostly Adventures is set in the future, where the protagonist is the descendant of celebrated coin-op couple, Pac-Man and Ms. Pac-Man.  As the last remaining yellow dot muncher and endowed with atypical strength and speed, Pac-Man is a harbinger of hope against the malevolent Betrayus, leader of the Ghosts. Clandestinely assisting Pac are the members of Ghost Gang (Blinky, Pinky, Inky, and Clyde from the original arcade game) who help to prevent Betrayus from seizing the fruit-bearing Tree of Life.

Although the backstory sounds a bit somber – especially for a television series and game aimed at a younger demographic, Ghostly Adventures rarely delves too deeply into its angsty context. Habitually, issues of Pac being orphaned or the burden of being a predestined savior are overlooked, with atmosphere typically established by belching after a fruit binge and other conventional cartoon pratfalls. That said, I grudgingly watched a few episodes grasp the game’s context, and ended up unexpectedly enjoying the series. 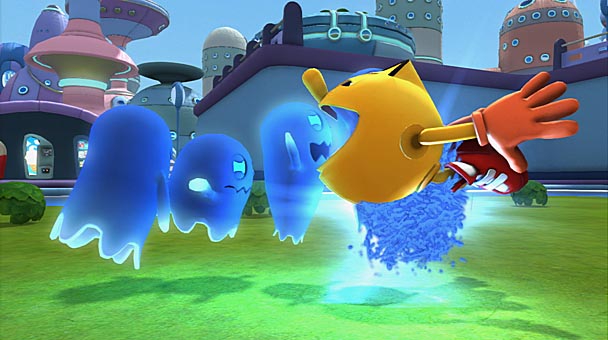 Using the standard template of themed worlds with numerous sub-stages, Pac-Man and the Ghostly Adventures’ levels revolve around navigation, combat, and collection. The Pacster moves nimbly across the title’s pathways, double jumping across gaps, gobbling paths of pellets , and activating switches to open gated areas. The ability-granting berries which are regularly depicted in the animated series also play a key role in the game. By eating one of these fruits, Pac-Man transforms, gaining skills in the process. For example, turning into chameleon form allows the protagonist to become invisible or use his elongated tongue to swing across posts. Periodically, these aptitudes also revolve around light puzzles- such as using the freeze ability on a fountain. This action solidifies the erupting water, allowing the fixture to be used as a staircase.

Intermittently, players will wander into an area overrun by ghosts. Pressing the ‘X’ button induces a chomp from Pac, which is enough to devour standard foes. If another enemy is near, moving the analog stick and press the button again with send the protagonist leaping toward the next foe- occasionally, chasms are crossed using this process. Later, the game admirably attempts to offset tedium by giving ghosts get abilities and behavioral patterns; players are often compelled to use berry abilities to surmount these opponents. While combat is functional and complements the platforming, it also lacks finesse. Too often, players may find themselves mashing the attack button and wrenching the stick around- particularly in those areas filled with foes. Ghostly Adventures does little to discourage this type of frantic play and even rewards players with a power-up after rapidly eating a succession of spirits. Another problem is when ghosts are near the edges of the playfield; Pac will unwisely chase after them, plummeting to his doom. Fortunately, a liberal number of mid-level checkpoints keep this from becoming too frustrating.

Alongside the console and PC versions, the pullet chomper is also making his way onto a portable system, with Nintendo 3DS version that’s launching a week after the other version. Regretfully, this adaptation of Pac-Man and the Ghostly Adventures doesn’t match the proficiency of its big brothers. 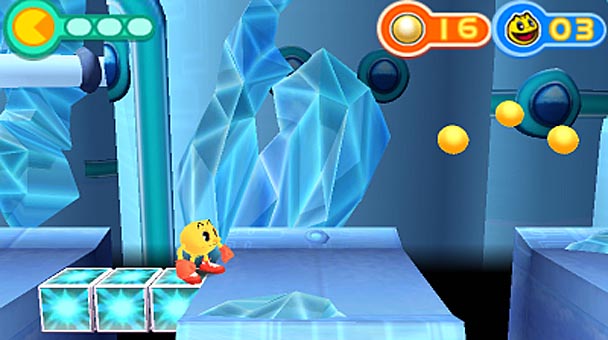 Beyond voice over being condensed into brief sound bits and converting cinematics into static pieces, the 3DS iteration transforms the title into a 2D side-scrolling platformer. The mechanics of berry power-ups of eating chains of ghosts remain- and it’s actually a bit easier to use these abilities with the perspective shift. Notably, there’s a greater emphasis on combat; occasionally the game’s stops forward progress until a certain number of enemies are defeated. But missing are the exploratory elements, where players would uncover concealed alcoves along with the satisfaction of discovering these areas. To compensate for these changes, a Power Berry cultivating component allows players to increase their abilities- from adding might to attacks to increasing the duration of assaults. The 3DS version also employs a scoring system, which would have been a solid addition to the other versions. If you have the ability to play Ghostly Adventures on a console, you’ll find the experience that the experience is a bit more sophisticated and satisfying. 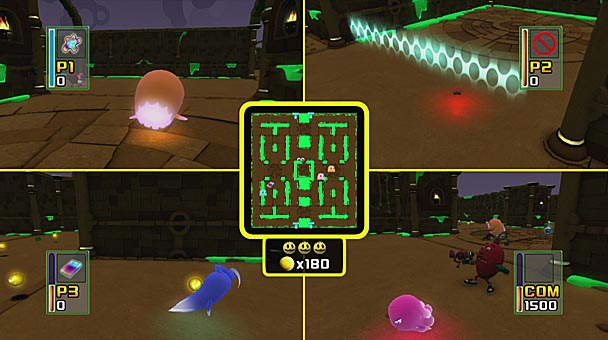 Beyond the lines of power pellets which help guide gamers through the levels, there are also a number of additional objects to collect throughout the game’s six worlds. The frequent appearance of diminutive fruit restores Pac-Man’s health, allowing the game to be enjoyed by younger players. Larger fruit is gobbled up at the end of each level- collecting a preset amount of each variety opens mini-games back at Pac’s school- which also serves as the game’s hub. Beyond the game’s seven hour campaign, a multiplayer component returns players to archetypal locales, as up to four local players try to stop the dot muncher in a three-dimensional power-up filled maze. Like Ghostly Adventures, it’s certainly fun but decidedly old fashioned, feeling a bit like Mario Kart’s supplementary events.

Arguably, the title’s most surprising element is its presentation. Pac-Man and the Ghostly Adventures does an amazing job of capturing the aesthetics of the television series. The game’s environments carefully mirror their broadcast counterparts- down to the vending machines which dot the corners of playfields. While these is some assets recycling across the levels, the game’s attractive and detail background art helps to alleviate this transgression. Voice acting from the television program and a frequent integration of sound samples from the original arcade game demonstrate that Ghostly Adventures isn’t a quick cash-in. 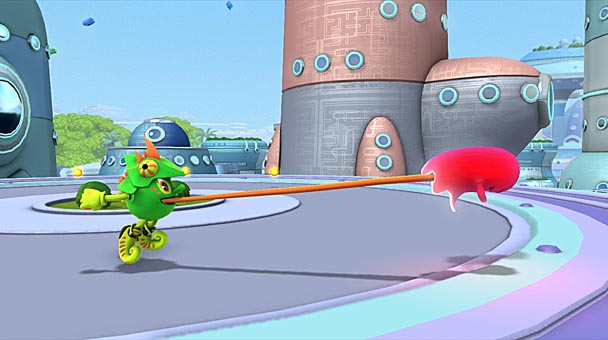 Agreeably, Pac-Man and the Ghostly Adventures is being sold at a forty dollar price point- which is a nice gesture considering the game’s deliberately simplistic design. While the cherished chomper’s actions outside of mazes have been middling, Ghostly Adventures approach and allegiance to its source material is commendable- capable of introducing Pac to a new generation of gamers.

Pac-Man and the Ghostly Adventures was reviewed on the PlayStation 3 and Nintendo 3DS with review code provided by the publisher.

Pac-Man and the Ghostly Adventures Review
Amidst the twilight of the past millennium, the three-dimensional, mascot-driven platformer was undoubtedly the genre du jour. It was an age when personalities such as Bubsy, Gex, Rayman, and Mario made the leap from sprites to polygons, while a throng of new hopefuls like Croc, Jersey Devil, Bug, Spyro, and Blasto were trusted with establishing fresh franchises. In retrospect, these games were delightfully simple- typically tasking players with uncomplicated platforming, combat and item collection. Although technological advances added nuance in the ensuing years, popularity for the 3D platformer gradually waned. The recent release of Pac-Man and the Ghostly Adventures for&hellip;