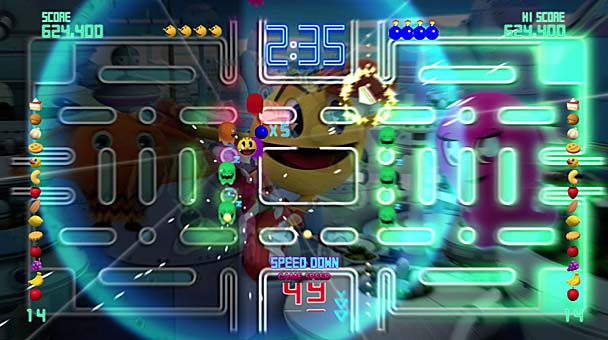 To say that until recently Pac-Man had fallen on hard times for last two, or maybe even three decades would be an understatement. Yes, the characters are cute and adorable- making the lovable yellow glutton the perfect company mascot, but the games themselves haven’t enjoyed a great measure of critical and/or commercial success since Ms. Pac-Man. Don’t get me wrong, I’m not being hard on Namco; the original formula is difficult to improve upon. That said, 2007’s Championship Edition seemed to have reversed this trend, leaving me with high hopes for this follow up.

Released in late 2010 with an update and a re-name as recently last as month, Pac-Man CE DX+ has you controlling the same classic character as he wanders through a series of mazes populated by cartoony, but hostile, ghosts.  This time, your objective is not to eat all of the small dots before said ghosts get to you, instead you are playing against the clock for either points or challenges depending on the game mode. 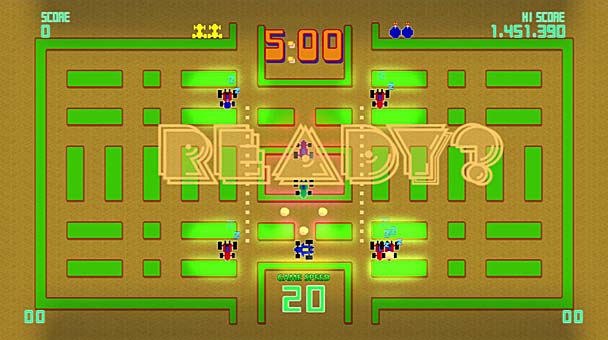 Munching the dots in the map will not only gradually increase the speed of the game, but also spawn fruit on the opposing side of the screen. Eating these will morph the maze around you, and re-populate it with both dots and a new set of napping ghosts. When you pass by them, they’ll start chasing the player in a straight line. As the fruit eating and ghost waking process repeats itself over and over and at a faster rate, you’ll soon find yourself being chased by a very colorful and psychedelic ghost conga-line. Once you find a power pellet the real fun begins, eating dozens of the little buggers in a quick succession, watching the points and combos rack up, hearing the classic Pac-Man sound effects play faster and faster and all this set to a techno beat culminating in a neon explosion of color is an extremely trippy and satisfying reward!

Before long the speed of the game becomes absolutely frantic, to the point where I’d even lose sight of my own character, fortunately, when you’re too close to a ghost you enter a bullet-time mode and the screen zooms in on the action making it easier to get out of a sticky situation. Regardless, it’s at this point one should start memorizing the deliberate paths of dot patterns that form each time you eat a fruit. In a way, Pac-Man CE DX+ feels a lot like a time-based reflex puzzle game mixed with the classic 1980 formula as taking a single wrong turn can ruin your entire strategy, especially if you run into a wall of sleeping ghosts with no available exit. Luckily, you have a new power-up in the form of a bomb, when used it sends the ghostly rainbow conga-line (I can’t believe I just said that) back to their central holding pen. It also has the added mixed-blessing of reducing the speed of the game, making it more manageable but substantially reducing your point collecting rate. 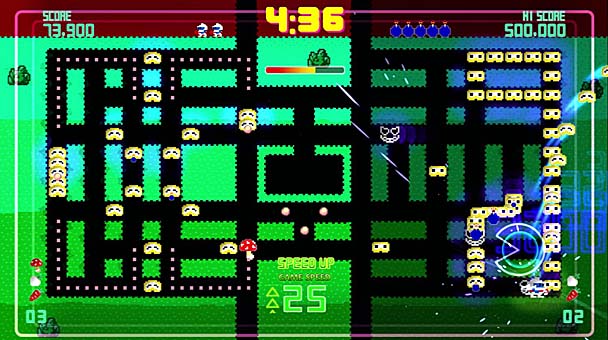 As fun and challenging as the game is, the real trick is surpassing your friends’ highscores, something which the main menu screen is kind enough to remind you every time you log on. The new update allows you to issue challenges to anyone in your friends list, but this came a little late as I don’t know anyone who still plays the game, bear in mind this is a three year old game. The most note-worthy feature implemented by the update is the addition of DLC in the form of character skins and new mazes. They’re not terribly expensive at $1.99 each and while the Dig-Dug skin pack had me giggling like a schoolgirl the novelty eventually wore off. I also didn’t really care for the extra maps save for the “Big Eater Course” which spawns ghosts at an increased rate, at one point over a third of the screen consisted of nothing but blue ghosts and the neon-spectacle that followed was beautiful. If you’re not interested in buying skins, you’ll be glad to know the game already comes with several to choose from and they all maintain the nightclub theme to some degree. However some of them were too cluttered, making it hard to perceive the action.

Pac-Man CE DX+ is very fun to play, whether it’s in short bursts or as a time-sink this updated entry feels as timeless as the original and it’s definitely one of the best arcade experiences I’ve had in a long time. The addition of DLC may have come a bit late into the product’s life and save for one or two items I didn’t particularly care for it, better late than never though. 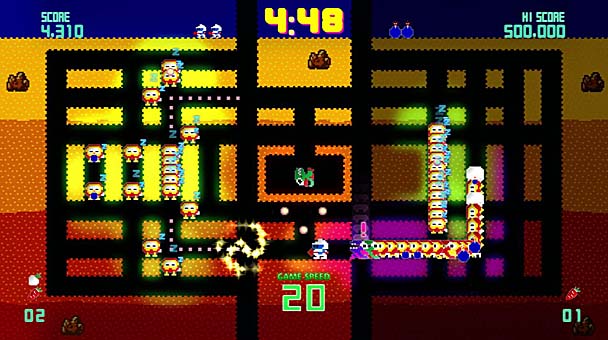 Pac-Man CE DX+: The Wakka Wakka Nightclub
To say that until recently Pac-Man had fallen on hard times for last two, or maybe even three decades would be an understatement. Yes, the characters are cute and adorable- making the lovable yellow glutton the perfect company mascot, but the games themselves haven&rsquo;t enjoyed a great measure of critical and/or commercial success since Ms. Pac-Man. Don&rsquo;t get me wrong, I&rsquo;m not being hard on Namco; the original formula is difficult to improve upon. That said, 2007&rsquo;s Championship Edition seemed to have reversed this trend, leaving me with high hopes for this follow up. Released in late 2010 with an&hellip;

Summary : A fresh take on a classic formula, it’s a blast to play for both fans of the 1980 original and newcomers alike.