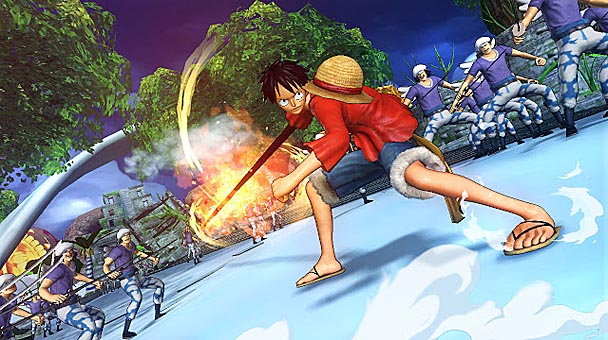 For the past thirteen years, a multitude of milieus have been viewed through the lens of Yokohama-based developer Omega Force. From the studio’s pseudo-historical franchises like Dynasty Warriors and Samurai Warriors to efforts based on anime like Fist of the North Star and Gundam, each entry in the Omega oeuvre is built around the same fundamental tenets. While pushing through a plethora of opponents makes sense in more fantastical settings, when Dynasty Warriors’ Cao Cao is depicted trouncing a thousand enemy troops, a slight suspension of disbelief is required.

Which makes the whimsical world of One Piece an ideal contender for the musou treatment.  With characters like the rubber-limbed Monkey D. Luffy, master swordsman Roronoa Zoro, and the weather manipulating thief, Nami, the oddball abilities of the Straw Hat Pirates are a superb match for the hyperkinetic scuffles crafted by Omega Force. The recent digitally downloaded release of One Piece: Pirate Warriors 2 demonstrates the power of endowing players with these madcap abilities, resulting in a marvelous interpretation of the source material. Save for succumbing to the persistent problem of repetition, a generous selection of 27 distinctive playable characters and an involving character development system make Pirate Warriors 2 a worthwhile title for both One Piece devotees as well as fans of the genre. 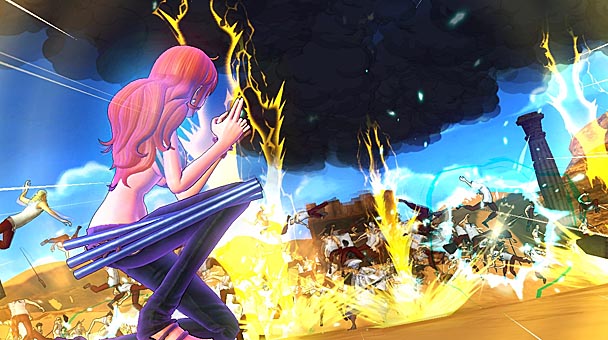 Unlike the game’s 2012 predecessor, One Piece: Pirate Warriors 2 doesn’t try to duplicate the action of major story arcs, delivering a chaotic and non-canonical ‘dream story’ to drive the action. The impetus behind a succession of skirmishes occurs when a dial releases a mysterious gas, turning everyone except Luffy and Nami against the Straw Hat Faction. While the push toward Straw Hat reunification is predictable, Pirate Warriors 2’s plot also provides unexpected elements, as longtime foes sporadically come to the player’s aide generating an ample supply of fan service. Although some of the plotline is told through prerendered sequences which ape the look of the anime, the majority of the story is told through animated character portraits. While these skippable bits are functional, they stand in sharp contrast to both the game’s action and the pace of the source material.

Pirate’s Log is the name given to the Pirate Warriors 2’s prolonged campaign set against the backdrop of Punk Hazard. Following Dynasty Warriors convention, players dash across battlefields, gradually shifting the tide of battle. Typically, this is accomplished by whittling away at throngs of enemies; in specific areas, the game requires player to dispatch enough enemies to drain a meter, or eliminate elevated Whitebeard or C9 captains. While the goal of each stage is uniform to the game’s credit, levels are highlighted with fluctuating sub objectives and surprise enemy attacks to help offset the predictability of battle. 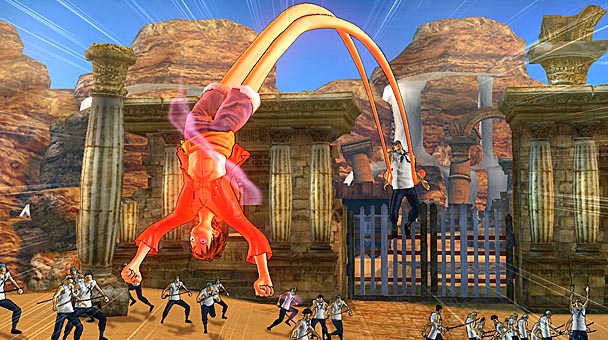 To knock opponents on their posteriors, players use a combination of the square and triangle buttons. As protagonists persevere, they level up- giving gamers access to even more spectacular strikes. Much of Pirate Warriors 2’s enjoyment stems from the strength of these dominating attacks. Characters like Smoker lift foes in a spiraling plume of clouds while Nami summons multiple bolts lightning to stun a swarm of opponents. Pleasingly, each playable persona feels remarkably different, urging players to absorb the abilities of each character.

Beyond basic attacks, Luffy and company also have the ability to initiate a powerful Style Action and even more devastating Crew Strike. Once players have filled on on-screen Style Gauge by engaging enemies, a press of the R1 imitates the former, exponentially increasing the power and speed of the protagonist and adding a new attack, such as Luffy’s  overwhelming Gum Gum Elephant Gun. Deal enough damage during this sequence, as a Crew Strike can be called up. During these assaults, players briefly shift control to a supporting character who is able to issue additional injury. Pirate Warriors 2’s core strategy revolves around when to activate these attacks; while these powers can make quickly make mincemeat out of a crowd, they’re also helpful for defeating bosses. For better or worse, elevated enemies can muster their own murderous attacks, making these showdowns the game’s only thorny section. Regretfully, if players succumb to a boss character, all level progress is lost. 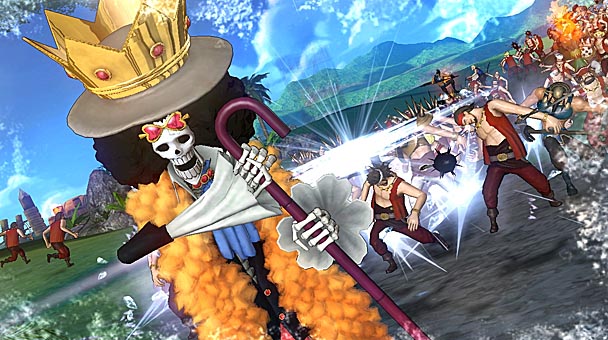 Goading gamers through the Pirate’s Log, Free Log, and Challenge Mode is a constant drip feed of collectables. Treasure chests scattered around the perimeter of the battlefield hold coins, which can be equipped for stat bonuses. Skill Notes spread across stages offer additional perks, bestowing additional aptitudes when player’s fill in these bingo card-like arrays. The generous amount of money earned in each level can be used unlock artwork- or if players desire level up characters. Credit should be given to Omega Force for giving players an alternative to level grinding.

Visually, One Piece: Pirate Warriors 2 is ambitious, putting scores of simultaneous adversaries and special effects on-screen. Although the game’s occasionally hits the sixty FPS benchmark, the framerate can drop significantly when things get hectic. The title’s soundtrack isn’t as determined; jazzy tracks provide a vibe which matches the IP’s upbeat vibe, but the guitar-thrashing jams seem borrowed from Dynasty Warriors playlists. 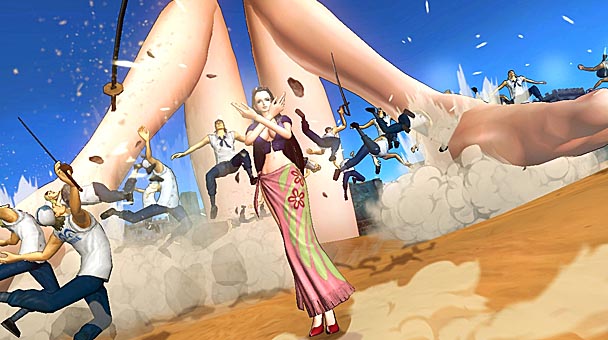 Although One Piece: Pirate Warriors 2 isn’t a flawless treasure, it’s an intensely enjoyable romp elevated by lunatic action and an impressive assortment of playable characters as well as secondaries. Staunch Dynasty Warriors detractors probably won’t be able to stomach the basic template, but One Piece addicts will find the game as potent as a freshly harvested gum gum fruit, only without the noxious aftertaste.

One Piece: Pirate Warriors 2 was played on the PlayStation 3 with review code sent by the publisher.

One Piece: Pirate Warriors 2: Stretching the Formula
For the past thirteen years, a multitude of milieus have been viewed through the lens of Yokohama-based developer Omega Force. From the studio&rsquo;s pseudo-historical franchises like Dynasty Warriors and Samurai Warriors to efforts based on anime like Fist of the North Star and Gundam, each entry in the Omega oeuvre is built around the same fundamental tenets. While pushing through a plethora of opponents makes sense in more fantastical settings, when Dynasty Warriors&rsquo; Cao Cao is depicted trouncing a thousand enemy troops, a slight suspension of disbelief is required. Which makes the whimsical world of One Piece an ideal contender&hellip;

Summary : While One Piece: Pirate Warriors 2 is built on the Dynasty Warriors template, Luffy is no reskinned Liu Bei. The game shines because of the over-the-top abilities of its wild character roster.