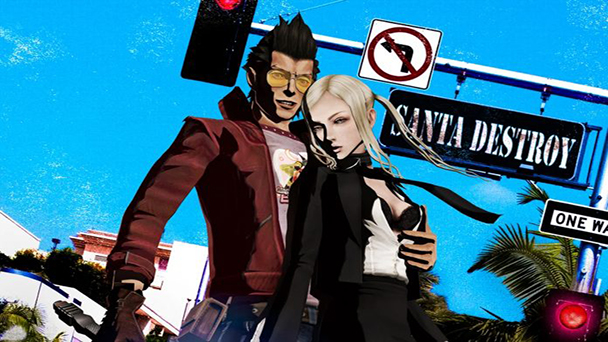 With industry budgets escalating and risk shrinking correspondingly, it’s a great time to visit Suda51’s efforts, which simultaneous mock gaming while still providing enjoyable recreations. While the first has title has a bit of difficulty with the balancing act, the sequel is the more gratifying effort. 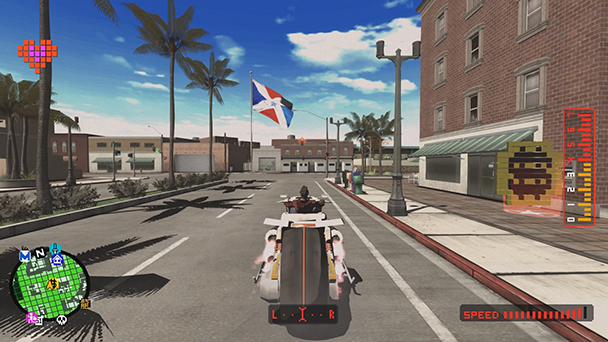 Nine months before the original release of No More Heroes, Goichi Suda hosted a lecture at the 2007 Game Developers Conference entitled, “Punk’s Not Dead”. It’s a phrase rightfully associated with the director as well as his company, Grasshopper Manufacture. The studio’s early output, with titles like The Silver Case, killer7, and Flower, Sun, and Rain all share a defiance toward conformity. Each is magnificently multifaceted, resists straightforward description, and has more personality than many developers’ entire body of work.

With the Steam releases of No More Heroes and No More Heroes 2: Desperate Struggle, players are now privy to pair of Grasshopper Manufacture’s most notable titles. Given the current state of the industry, where award shows are little more than tedious pageants of crass commercials, and anything that flirts at transgression has the potential to incite a social media mob, revisiting these two games can feel invigorating. But more than a decade on, some of the divisive design decisions are less defensible, especially with the first game. Perhaps that’s just how punk ages. 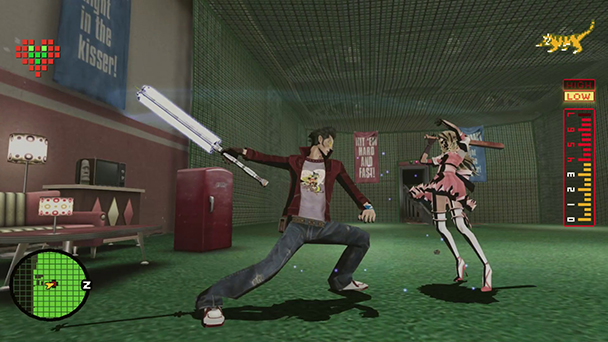 Many might feel a kinship with No More Heroes protagonist Travis Touchdown. Clad in a t-shirt emblazed with a magical girl/mecha anime (“Pure White Lover Bizarre Jelly”) his seedy motel room is crammed with figurines, luchador masks, skin mags, and his trusty beam katana weapon. Unlike the noble motivations of most game leads, Travis really wants to get laid, making him a wonderfully comically/tragic figure.

The bulk of Heroes revolves around Travis ascending up the United Assassins Association’s rankings, with a rendezvous promised if he makes it from the eleventh position all the way to the top. Expectedly, showdowns with each of your rivals are the highlights of the game. Each is preceded by a wealth of hack-and-slash action, using your beam katana and a few wresting moves to turn adversaries into geysers of blood and currency. Like much of No More Heroes, it’s all very grindhouse and slightly surreal- thanks to environments that seem to stretch out in perspective-skewing ways. What’s curious is Travis’ nonchalant attitude about the all the killing. Given the eight-bit sound effects that chime throughout and rankings that resemble hi-score tables, we can almost assume it’s all a game within a game. 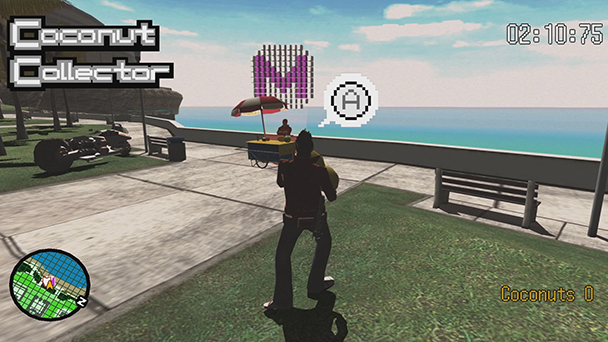 But your rise up the assassination ladder has the pricing structure of a multi-level marketing plan, forcing you to regularly come up with coffers. Perhaps Suda is commenting on the triteness of mini-games or even the humdrum nature of suburban life (apparently, he disliked growing up in Nagano), but activities gathering coconuts and mowing grass are tedious. And since the game dangles perks likes new clothing, weapons, movies, and gym training, you’ll be forced to tolerate the tedious labor. Perhaps all those recreations across the Yakuza franchise have spoiled us.

Likewise, tooling around the streets of Santa Destroy feels like a throwback to the early open worlds of the seventh console generation. Streets are eerily empty and there’s not a lot happening. Again, this could be Suda making a point, or it could be a limitation of the original hardware. But either way driving to each destination feels like a chore. But here’s the odd thing: the monotony makes the action sequences that much better. Here, the banality of generic streets is juxtaposed with some of the most colorful boss characters around. Each feels like one of those over-the-top eccentrics from the mind of Tarantino, with a look, attitude, and ideology that all gels together memorably. And here’s the real kicker: as much as the accessible combat made me feel like a badass, I didn’t want to kill some of them. Murdering these oddballs meant one less misfit in a rather bland world, which is probably one of the more transgressive decisions in modern gaming. When is the last time you encountered a boss that you regretted fighting? 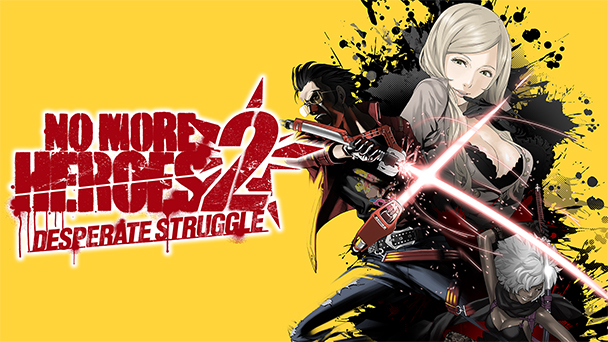 Like any respectable sequel, No More Heroes 2: Desperate Struggle aims to mend its predecessor’s faults while doubling down on its potencies. Here, the tedious side jobs have been swapped out for NES-style creations. Save for the overly difficult muscle and stamina training as well as the reappearance of a deliberately awful scorpion exterminating mini-game, the recreations here are good enough to support replay. Even better, there’s no uneventful riding around Santa Destroy. With Desperate Struggle, you’ll choose locations from a menu, while a brief transitionary sequence exposes the layout of the town. Gone are the game’s financial requirements before confrontations.

It’s a thoroughly streamlined journey this time out. On the upside that makes for a better game but it also means some of the angsty industry ridicule is missing. This time out, Travis and his cohorts are undeniably aware of their presence in the game, often speaking to the player directly in Deadpool-like style. Essentially, Desperate Struggle captures the neo-nihilism of the ‘merc with a mouth’ even better than the character’s own game. 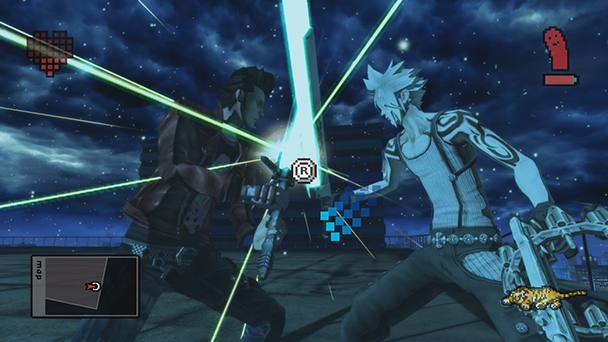 In keeping with the homage to grindhouse cinema from the first game, Desperate Struggle follows the same escalation up the United Assassins Association standings, with sex and now revenge serving as motivations. Yes, this contradicts one of No More Heroes’ notable reveals. However, Suda’s games have never been restrained by reality. With all of the Grand Guignol violence, game, and pop-culture references, this is probably all taking place inside Travis’ head. If the game’s worldview were permeated in realism the inconsistency might be an issue, but here it’s just another odd detail on a capricious trek.

Despite knowing the broad trajectory, Desperate Struggle still keeps the novelty flowing through its eight-to-ten-hour duration. Much of that unpredictability is rooted in the increased number of cinematics. Unlike most games, where the purpose of each cut-scene is unmistakably apparent, these sequences are often charmingly ambiguous. More interesting, they linger over bodies, studying breasts and hips in a leisurely manner. While other franchises have ditched leering camera angles from their revisions, here it’s a critical choice, letting us into Travis’ lascivious mind. 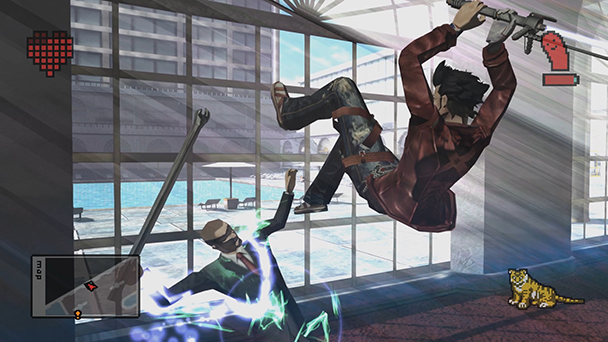 Where the original No More Heroes felt satirical, often riffing on the tired traditions of gaming, here things feel downright celebratory. Combat was already wonderfully realized in the first game but here it’s been tuned for constant gratification with additions like Travis being able to turn into an enemy-shredding tiger. Likewise, opponents don’t just feel like game fodder. Now, the AI has been tuned to block and dodge your attacks. Gradually, the intensity escalated with some of the game’s main confrontations will reject spammed attacks. Comprehensively, the sequel is a much more enjoyable experience, even if it’s less edgy and indignant.

Both No More Heroes and No More Heroes 2: Desperate Struggle employ launchers rather than allow for setting changes in-game. Woefully, players won’t find many options beyond full/windowed output, four anti-aliasing settings, audio mixing levels, English subtitles, and the option to invert the X/Y axis on controllers. Noticeably missing is any kind of adjusting for shadowing, which can be especially distracting when rendered on character faces. Otherwise, those with even a modest rig can expect higher resolutions and framerates that are much more fluid that the original Wii title. 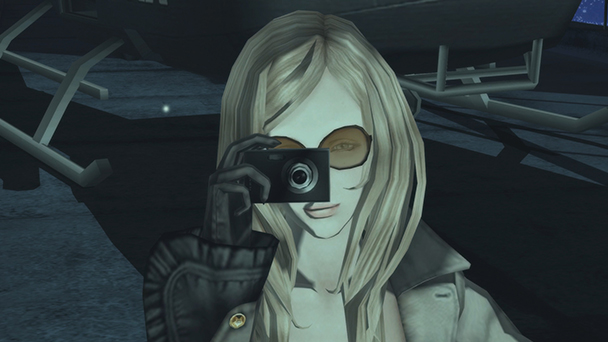 Both No More Heroes and its sequel are outliers in gaming, making to simultaneously parody gaming while still offering engaging action. While the inaugural title is the more interesting experience, it’s also the more divisive one, goading gamers into performing the kind of tedious tasks that notoriously pad playtimes. So, for cheaper than one insipid modern title, you can pick up a pair of subversive masterpieces. Sure, they aren’t as agreeable or attractive, but real punk refutes polish.

No More Heroes/No More Heroes 2: Desperate Struggle review
With industry budgets escalating and risk shrinking correspondingly, it&rsquo;s a great time to visit Suda51&rsquo;s efforts, which simultaneous mock gaming while still providing enjoyable recreations. While the first has title has a bit of difficulty with the balancing act, the sequel is the more gratifying effort. &nbsp; Nine months before the original release of No&hellip;

Summary : No More Heroes and No More Heroes 2: Desperate Struggle might be Goichi Suda’s best efforts and it’s great seeing them arrive on PC in a reasonably priced form. Punk’s not dead as long as Grasshopper Manufacture stays away from overassertive publishers. Let’s hope that doesn’t happen again.