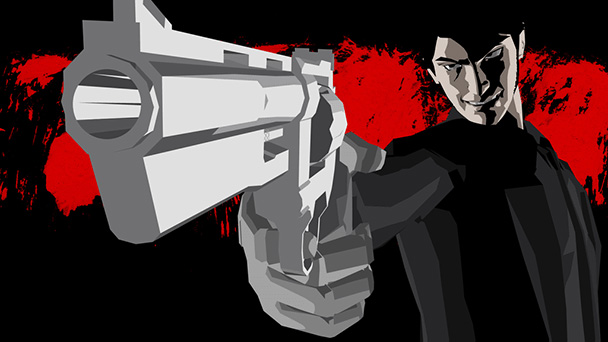 The original 2005 release of Killer7 was Goichi Suda’s first game released outside of Japan. Many consider it to be the director and writer’s magnum opus. Delving into the title, you’ll soon understand why. Although some of Killer7’s mechanics are simplistic and derivative, and its puzzles can seem contrived, the game’s approach to storytelling is revelatory. Whereas most interactive entertainment is rooted in rationality, Killer7 espouses a surrealistic style that makes it easy to overlook any minor transgressions.

The game’s title refers to the squad of seven assassins that players take control of. While they might actually exist, they could also be separate personalities inside the head of Harman Smith. He’s an elderly man with an armor-piercing rifle attacked to the back of his wheelchair, and leader of the game’s eponymous syndicate. 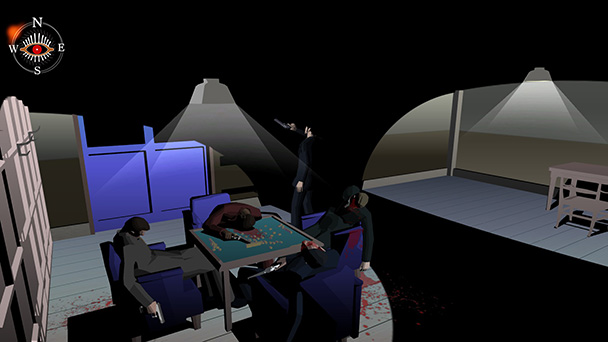 Unsurprisingly, members of the organization have wildly idiosyncratic personalities. Some characters will undoubtedly seem familiar. Dan Smith is a gravelly voiced, revolver carrying, Dirty Harry doppelganger. But others, like the perpetually barefoot Kaede, challenge the femme fatale trope. With a bloodstained dress and general disdain for men, she’s far too detached to conform to formula, mirroring Suda51’s own approach to direction.

Mask de Smith is a former luchador who carries heavy-hitting weaponry and is able to perform a number of wrestling attacks and counters on opponents. Anyone who’s played Suda’s No More Heroes will appreciate the nod to lucha libre, and the excessively observant might even notice a few allusions to Eighties Brit-pop and James Bond films. Largely, Suda’s work invites analysis and for the obsessives, identifying all the references becomes its own game. 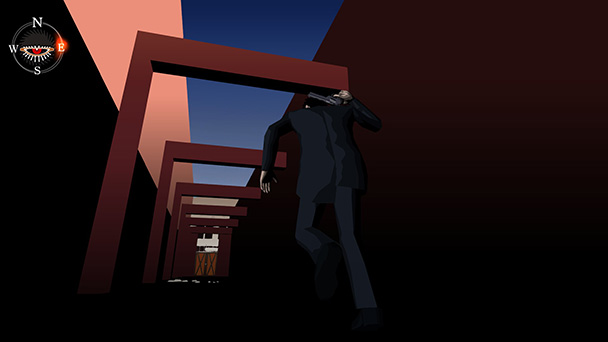 And while unearthing facets of each character’s personality is interesting, the game’s geopolitics are even more fascinating. Set in an era of peace where the world’s cache of nuclear weapons have been scuttled in the upper atmosphere, internet and air travel are halted to prevent terrorism. These efforts to create concord backfire, creating political tensions that threatens the relationship between the U.S. and Japan. Opposed to, and interlinked with Harmen Smith is an old acquittance Kun Lan, who has created “Heaven’s Smile” a virus that’s led to an army of suicide bombers. While Japan/US relations are presently quite friendly, Killer7’s storyline reminds us that friction can occur between the closest of allies and often noble intention can have calamitous results.

Those expecting straightforward exposition are bound be dumbfounded by Killer7’s methods. Dialog is often deliberately abstract, adding to the feeling that you are an interloper in the game’s curious world. The game’s NPCs are every bit as unusual as its verbiage. Iwazaru, who offers assistance through much of the game, is dressed in bright crimson bondage with his hand permanently fixed into a ‘finger in front of the mouth’ silencing gesture. Typically dangling in environments by a bungee cord, his appearance seems bizarre, but like many of the Killer7’s complexities, gradually comes to make sense. 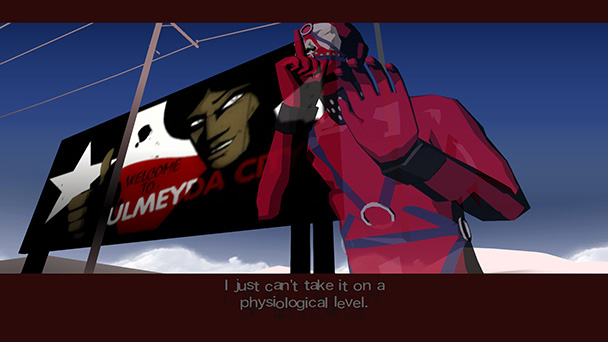 Although the game’s wild bloodshed and rather stiff shooting might seem to evoke comparison with Resident Evil’s brand of survival horror, in execution Killer7 offering a distinctly different tonality. With its ambiguous dialogue, strange characters, and irregular camera angles, the title wants to keep players out of their comfort zone and marveling at the uncanny. As such, Killer7 feels like being inside a heady, neo-noir arthouse film that’s refreshing far removed from the triple-A blockbusters which spoon-feed audiences.

Of course, there are a few issues working against the experience, that have often grown more conspicuous in the thirteen years since the game’s release. Largely, the simplified control scheme isn’t an issue. Here, a single button moves your character forward, permitting platers to focus on the story rather than on the intricacies of navigation. But traversing the game’s lairs does present a few problems. Predictably, the titles shirk cartesian movement, but between the rotating camera work and the method of selecting where you want to go, it’s a bit easy to get disoriented. Some of the game’s key puzzles might be another sticking point, as the occasionally pause the storytelling until you find out what’s needed. 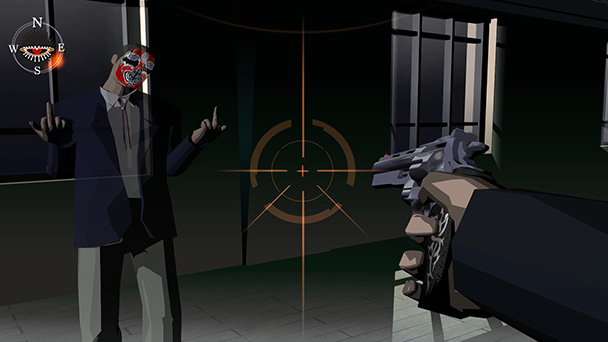 Engine Software did an exceedingly proficient job porting the title to PC. Even on modest rigs, Killer7 runs at a steady sixty frames-per-second, with only the reloading animation not keeping pace. More importantly, the game’s cell-shaded aesthetic gets upscaled and reshaped for 16:9 screens. In execution, the title looking astoundingly sharp, concealing it’s age far better than most it’s mid-2000’s peers. While most players many might have preferred to hear the original voice-work, here Killer7 stays faithful to the original releasing offering English language dialog that serviceable. Pleasingly, Masafumi Takada’s soundtrack receives a remastering, updating the eccentric mix of jazzy beats, techno, and straight-ahead rock.

Sure, Killer7’s shooting mechanics might seem like a primitive light-gun game. But assessing this game by examining its play is missing the point. Suda51’s masterwork is all about atmosphere and placing players in a world filled with uncertainties. Years after the original release, this proficient port is a much needed re-release of one of gaming’s weirdest treks. Thanks to this remaster, there’s an easy way to see why Goichi Suda considers this to be one of his favorite efforts. 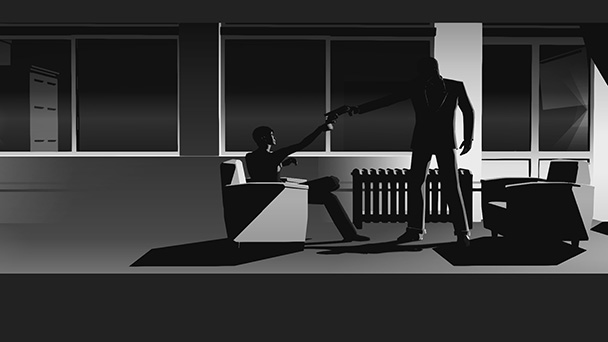 Killer7 was played on PC with review code provided by the publisher.

Killer7 (PC) review
The original 2005 release of Killer7 was Goichi Suda&rsquo;s first game released outside of Japan. Many consider it to be the director and writer&rsquo;s magnum opus. Delving into the title, you&rsquo;ll soon understand why. Although some of Killer7&rsquo;s mechanics are simplistic and derivative, and its puzzles can seem contrived, the game&rsquo;s approach to storytelling is revelatory. Whereas most interactive entertainment is rooted in rationality, Killer7 espouses a surrealistic style that makes it easy to overlook any minor transgressions. The game&rsquo;s title refers to the squad of seven assassins that players take control of. While they might actually exist, they could&hellip;