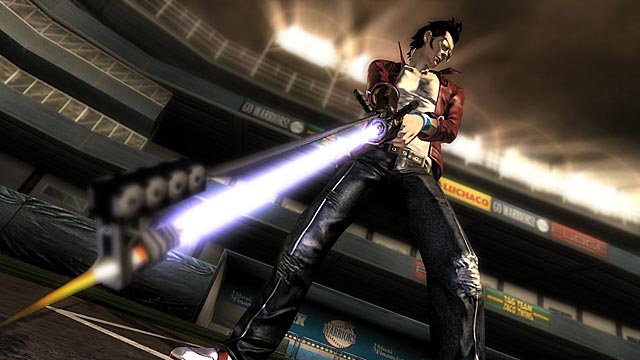 Although Sega, Capcom, and Konami valiantly tried to cultivate a core-gaming fanbase on the Wii, their efforts ultimately proved futile. M-rated titles such as Madworld, Resident Evil: The Umbrella Chronicles, and Silent Hill: Shattered Memories floundered at retail, failing to mimic the success of similarly-themed Xbox 360 and PlayStation 3 games. In an attempt to recoup their losses, developers are porting their overlooked Wii titles onto Sony’s platform, allowing the Move controller to replicate the functionality of a Wiimote.

Much like upcoming the upcoming adaption of House of the Dead: Overkill, feelplus’ conversion of 2008’s No More Heroes remains unswervingly faithful to its source material, complementing the game with a just a handful of additions and tweaks. While the rare Wii gamer who has already played through the original game won’t find enough of an impetus to return, players who haven’t scavenged the streets of Santa Destroy might want to sample Suda51’s efforts. With haunting boss designs, an abundance of sophomoric humor, and an endless supply of gushing arterial sprays, No More Heroes: Heroes’ Paradise delivers its own delightful brand of mindless mayhem. Regretfully, it also forces a troubling amount of tedium on players. 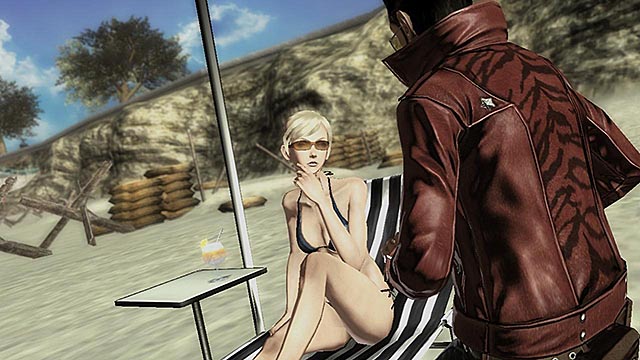 'Sylvia Kristel' was the name of a Dutch actress known for her role in the risque Emmanuelle series.

Players assume the role of Travis Touchdown, who resembles a James Dean for the Otaku generation. From his soliloquies which typically focus on youth conquering the aging, his collection of Luche Libra masks, and his affection for anime (expressed by thrusting himself at a poster of chibi witches and sighing “oh, moe!”), Touchdown straddles between moments of hyper-aggression and awkwardness. Thrust into killing the eleventh ranked hit-man in the United Assassins Association, the lanky protagonist resolves to steal the top spot, eliminating his competition in the process. Each of Touchdown’s successive challenges are arranged by Sylvia Christel- a perpetually lingerie-clad, French-accented femme fetale, who prods the protagonist along.

The title’s main stages consist of long halls filled with enemy fodder. Gamers start out armed with a high and low slashes, as well as two different ‘beat attacks’ capable of stunning an opponent. Periodically, players are also given the opportunity to develop their arsenal of wrestling moves, which are especially advantageous on dazed foes. While Heroes’ Paradise brawling will certainly be enjoyed by brawling-game buffs, there is an overwhelming homogeneity to the antagonists, who all wait obediently for the players to near. 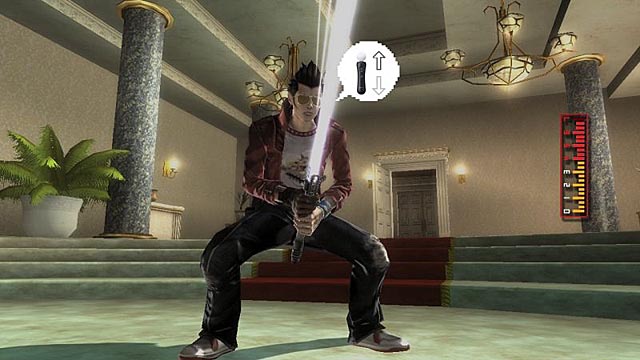 A bit of the old 'waggle' has never heard anyone.

Commanding Touchdown can be accomplished with either a traditional PS3 controller or with the Move peripheral. While the motion-sensing device is more adept at articulating Heroes’ passionate hacking and slashing, players still need to utilize the Navigational controller for movement as using a DualShock 3 feels unnecessarily clumsy. Recharging No More Heroes’ signature weapon still requires the occasional, giggle inducing violent stoke as the Wii version. Yet, here the controller needs to be perfectly vertical (erect?) before each stroke is registered.

Each level is punctuated with a protracted battle with one of the title’s imaginative and well-voiced bosses. Unlike clashes with underlings, these conflicts require more that simple button-mashing, and each assassin distributes some robust assaults with their signature weapon. Cleverly, Grasshopper Manufacture skews the typical archtypes of villainy. Gamers may have taken the life of a corrupt vice cop before, but it’s doubtful that the character lamented about dinner with his estranged daughter and an aspiration for singing in a baseball stadium before. Much like Suda51’s roster of personae in Killer7, expect Heroes’ collection of rogues to creep into your idle thoughts. 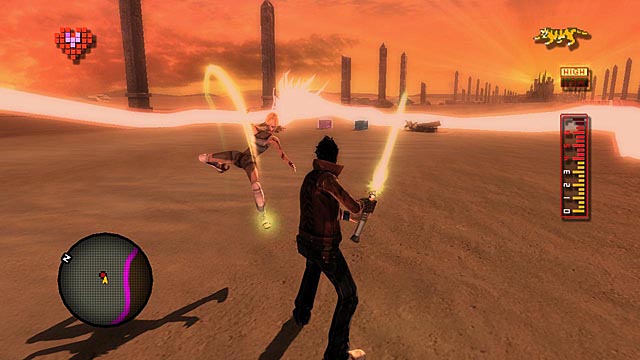 Easy, tiger! The big cat tell you how long your power-up will last.

While the game’s boss battles prove to be memorable, the game’s open, vacant world proves to be uninteresting. Although Touchdown’s motorcycle looks fast and ominous, it handles like a rocket-powered pull-wagon. Repeatedly, I managed to get the vehicle wedged down alleys, along the side of walls, or against the sporadic car. Players are forced to use the bike to get from one odd job to another, where they‘ll play mini-games to earn enough cash to unlock the next fight. With tasks which range from moving lawns, spinning signs, and coaxing kitten to race, these short diversions are more assuming then they are enjoyable. Fortunately, the game’s revamped checkpoint system means you won’t have to redo many of these digressions if you succumb in battle.

There’s a very good reason Goichi Suda has developed a cult-like following. His games are delightfully distinctive, and feel more like the creation of a wunderkind auteur than a focused-testing corporate output. As such, No More Heroes: Heroes’ Paradise isn’t without its share of flaws. Instead, consider them a compromise for the creative vision. While there may not be enough new substance to lure Wii owners back into the fray, PS3 owners who haven’t experienced Heroes’ surrealistic slaughtering might want to engage in a cathartic stroke of their beam katanas. 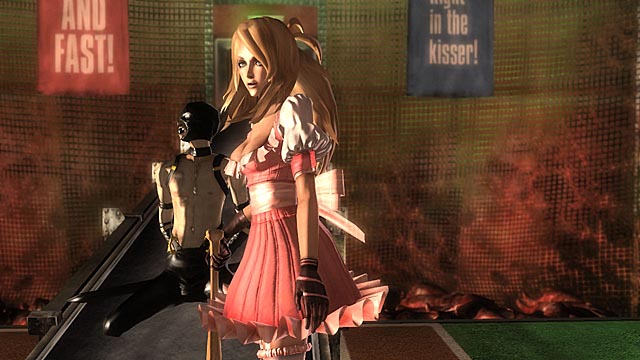 When did the MLB start using babydoll dresses as an alternate uniform?