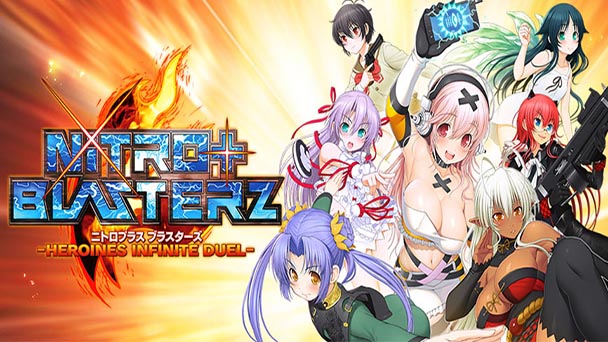 Back in 2006, Nintendo and Tommo teamed up to create Jump Ultimate Stars, a DS-based title which assembled dozens of beloved manga protagonists for a behemoth-sized battle royal. Understandably, obtaining licenses for Naruto, Bleach, Death Note, Dragon Ball, Fist of the North Star, Saint Seiya and a host of other properties would have been a contractual conundrum, with many speculating that there just wasn’t enough of an audience to justify the trouble.

Now, a decade later, fighting games that cull from a variety of Japanese properties are starting to make their way stateside. From J-Stars Victory VS+ to Dengeki Bunko: Fighting Climax, licensing agreements have been hammered out, allowing new audiences to enjoy pugnaciousness between an assortment of IPs. The latest game to sustain this trend is Examu’s Nitroplus Blasterz: Heroines Infinite Duel, which following a console debut last February, has made it’s way on PCs with a proficient port. Building on their experience with Arcana Heart 3: LOVEMAX!!!!!! and Aquapazza: Aquaplus Dream Match, the Tokyo-based development team delivers a largely enjoyable title that’s only marred by a slight lack of depth. 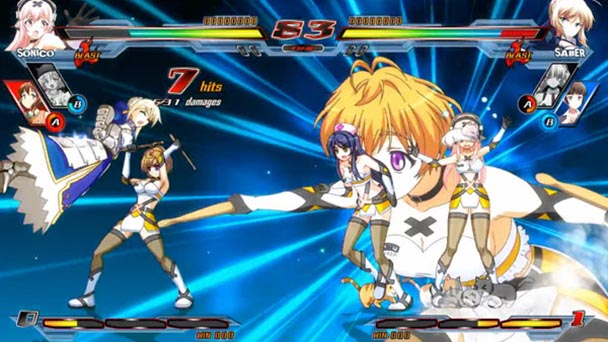 Superior fighting games often extend a comprehensive tutorial to players, giving a series of lessons that explain distinguishing mechanics. But woefully, players won’t find much of that in Nitroplus Blasterz. Beyond the ability to skirmish with a CPU drone or pour over the digital manual, you’ll have to learn how to become on competent combatant on your own.

Fortunately, Heroines Infinite Duel isn’t too difficult to pick up. As its core, characters are able to summon weak, medium, heavy and strong attacks. Additionally, a button is dedicated to Escape Actions-  allowing fighters to evade on the ground or in the air or even cancel out of normal attacks. Advanced specials and combos like the Variable Rush, Lethal Blaze, and Infinite Blast tend to draw from a player’s power gauge, but allow fighters to issue devastating combos, specials, and knockbacks from universal input methods. While an interactive guide would have been welcome, it won’t take experienced gamers too long to learn the ropes. Fortunately, the controls are responsive and commands aren’t terribly complicated, with the game maxing out at two quarter-circles following by a dual-button tap. 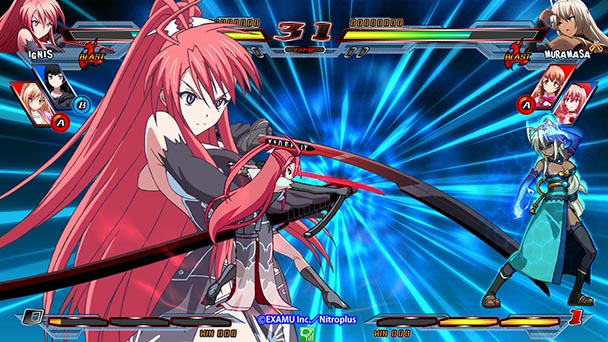 Like any fighter, the key to advancement is to dig in and study each characters’ combos and well as the timing used for doing things like charging attacks or bringing down an aerial opponent. Recovery represents another worthwhile lesson, with quick players able to risk a bit of their power meter to guard, then instantly retaliate. Two other cooldown gauges regulate when you’ll be able to issue a Partner Blitz, which sends either of your two comrades out in hopes of inducing further damage. Certainly, these are one of Nitroplus Blasterz’ high points, as its persistently amusing to pummel opponents with a pack of zombies chasing after a scurrying maiden or see a secondary come on-screen to thwack a rival with a baseball bat.

Like any fighter with a bevy of licensed combatants, bringing the pain seems more fun with recognizable protagonists. Although Infinite Duel’s heroines might not be as popular as J-Stars Victory VS+ or Dengeki Bunko’s luminaries, there’s still a number of notables for fans with even a fleeting familiar of light novels, manga, or anime. The cast of fourteen playables (two are locked at the start) as well as nineteen support characters are culled from Nitroplus properties, as well as any IPs where the publisher’s talent is shared. Beyond the inclusion of Fate/stay night’s Saber, notables include Aino Heart from Arcana Heart, Senran Kagura’s Horura, and voluptuous brand mascot Super Sonico as playables. The latter two are bundled with this port, but were once paid DLC  on console following a four-week promotion. 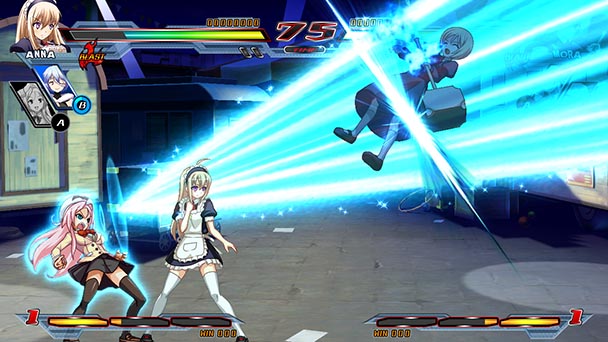 Unquestionably, the cast demonstrates a diversity of play styles, with characters like Ein having lissome mobility and powerful ranged attacks while Ouka delivers amount sof damage that are surprising, especially for a cross-bound loligoth. Scour the roster and there’s likely a combatant that will mesh with your play style, whether you prefer an unpredictable play style, rapid-fire, demoralizing attacks, or simply to control an area.

The downside is that Nitroplus Blasterz is in need of a bit more balancing, as some fighters demonstrate a distinct advantage. This seem to be corroborated by online players, where a selection of four fighters dominate the action. On the upside, the bit of lag that would damped matches on console has largely been excised, allowing for a committed community to emerge. Another pleasing attribute is the quality of the port. Even on an i5-powered ultabook without a dedicated graphics card, Nitroplus Blasterz was able to run at a solid sixty-frames per second. 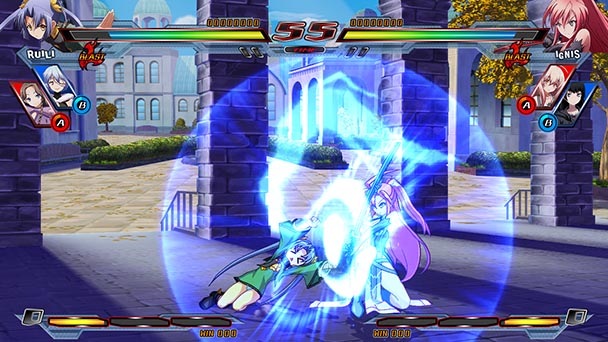 Story modes are often subordinate in fighting games and Heroines Infinite Duel does little to upset this tradition. Jump into the game’s Arcade Mode and the developers do their best to explain the convergence of different properties. Although it’s a gallant attempt, the narrative never becomes compelling and will just slow the cadence of the eight round event for most players. However, beating the mode unlocks Another Story, which offers a better attempt at plot, as ten visual novel sequences occasionally get interrupted by in-game fisticuffs. While it’s hardly The Tale of Genji, the mode is a nice perk in an otherwise basic package.

Simplicity is also evident during battles, with Nitroplus Blasterz extending aesthetics of mixed quality. Undoubtedly, the fighters look great and are fluidly animated, while specials often illuminate the screen with a bit of visual spectacle. But the parallax-scrolling backgrounds are devoid of animation and pre-fight portraits divulge a perceptible amount of pixilation. Meanwhile the game’s aural accompaniment isn’t remarkable, with upbeat but commonplace melodies setting the tempo for each fight. Sound mixing is a bit questionable as well, with callouts occasionally buried in the background. 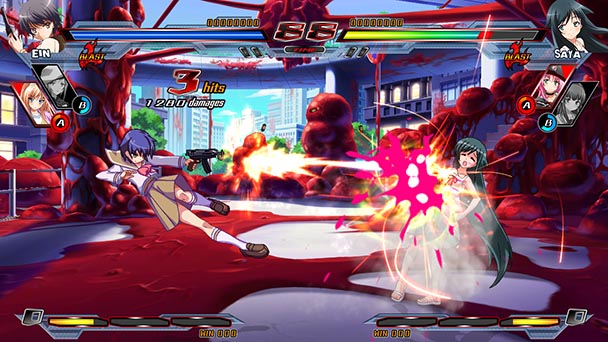 Although Nitroplus Blasterz: Heroines Infinite Duel has a few issues, a number of these transgressions might be forgivable, considering the game’s thirty-dollar MSRP, the inclusion of free DLC and an extensive exhibition of polish. The marketing maneuvers obviously aren’t going make up for a lack of any tutorial or the austere backgrounds, but they do help make Heroines Infinite Duel enticing for fans of the game’s cast. If you care about Aino and Horura you might want to jump in now, showing your fellow J-culture loving opponents who is boss.

Nitroplus Blasterz: Heroines Infinite Duel was played on
the PC with review code provided by the publisher.

Nitroplus Blasterz: Heroines Infinite Duel
Platform: PC, previously on PlayStation 4, PlayStation 3
Developer: Examu
Publisher: XSEED
Release date: December 8th, 2016
Price: $29.99 via Steam, currently on sale for $26.99
Nitroplus Blasterz: Heroines Infinite Duel (PC) review
Back in 2006, Nintendo and Tommo teamed up to create Jump Ultimate Stars, a DS-based title which assembled dozens of beloved manga protagonists for a behemoth-sized battle royal. Understandably, obtaining licenses for Naruto, Bleach, Death Note, Dragon Ball, Fist of the North Star, Saint Seiya and a host of other properties would have been a contractual conundrum, with many speculating that there just wasn&rsquo;t enough of an audience to justify the trouble. Now, a decade later, fighting games that cull from a variety of Japanese properties are starting to make their way stateside. From J-Stars Victory VS+ to Dengeki Bunko:&hellip;

Summary : If you're not familiar with characters on Nitroplus Blasterz: Heroines Infinite Duel roster, then the game probably won’t offer enough to interest you. But for those familiar with VNs like Full Metal Daemon: Muramasa or Phantom of Inferno, the game offers a peerless matchup of adorable protags that’s an all around great port.