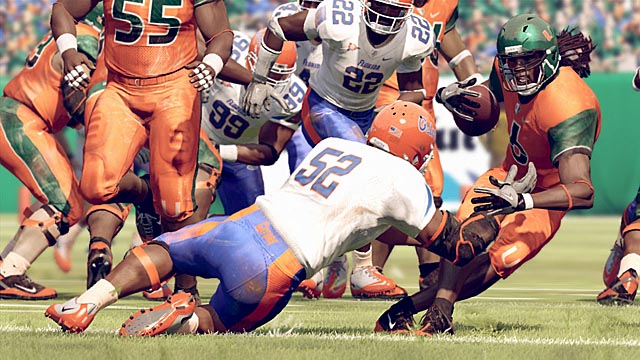 With our senescent seventh generation consoles experiencing an enduring lifespan, the yearly update has been a popular publishing stratagem. Now in its sixth year of development on the Xbox 360 (and fifth year on the PlayStation 3), the NCAA Football franchise has been able to continually evolve without having to be radically recoded for new hardware- allowing the series to steadily improve its simulation of college ball. Expectedly, NCAA Football 12 mends a handful of blemishes; although after a half-decade of continual refinement, most of the game’s major faults have already been excised.

One of the game’s most noticeable enhancements stems from the title’s new tackling engine, which use the momentum of collisions rather than pre-canned animations to determine how a defender brings down the ball carrier. Now, wrap-ups begin at the point of contact instead of some arbitrary spot, eliminating the surreal sliding or warping of players around the field. Additionally, other defenders sporadically help bring players down, although the complexity of a accurate gang tackle still seems to elude the developers. Once players have control of the ball, running feels wonderfully visceral thanks to these enrichments, making a potential  break through the line a consistently rousing experience. Even passing has been given a renovation, with the ball no longer magnetically attracted to your receiver’s hands. Zone Coverage, a persistent nuisance for the series has been mended, with your secondary accurately suppressing receivers in their zone. 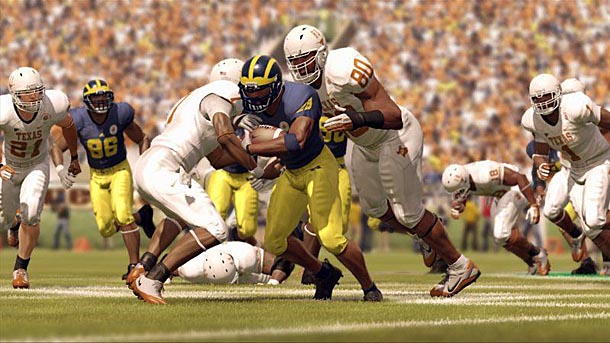 Even more obvious are NCAA 12‘s visual upgrades, which are evident from before the kickoff to post-game. Pre-game excitement is roused with ten new mascots and eighteen new entrances, allowing LSU’s Mike the Tiger and Wake Forest’s motorcycle-riding deacon to replicate  the frantic spectacle of a passionate Saturday afternoon game. Likewise, the title’s on-screen  tickers,  stadium shots, replays and screen wipes help to emulate the verve of a ESPN broadcast. While it may sound like a trivial upgrade, NCAA‘s 3D grass, makes the flat ground textures of most football games seem archaic. Fields even display a bit of degradation as the clock winds down, and show the irregular piercing blade when snow falls. HDR lighting ensures that shadows are accurately modeled, and that quarterbacks facing a setting sun are appropriately stymied.

Those dissatisfied with the polls and programming of the real-life BCS selection system might revel in NCAA 12‘s ability to create your own custom conferences. With little effort I was able to tweak the ACC  around, making my Tarheels journey to the Gator Bowl an exceptionally arduous effort. Beyond middling with the NCAA’s configuration, the title’s Road to Glory mode also allows for some fantastical fiddling as players guide an athlete from their senior year of high school, through the recruiting process. Initially, players are bound to follow your coaches’ demands- but gain a bit of experience, and you’ll begin to see the virtues of autonomy. Additionally, a player’s performance also earns boosters, which can be used to augment career or single-game stats. 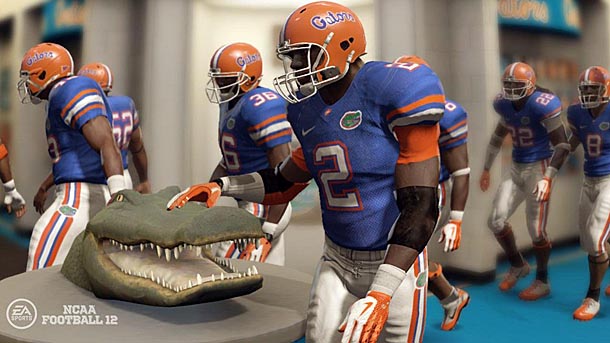 Gamers captivated with decision-making can hone their managerial skills with NCAA 12‘s coaching carousel. Cultivating a winning team allows players to catapult themselves to the most prestigious four year institutions- if they’re willing to forgo the temptation of resigning for another season. Whether players step into the shoes of either head coach or a coordinator position, one improbable wrinkle exists- they are also responsible for team recruitment.

Although a host of improvements elevate the quality of NCAA Football 12‘s simulation, several niggling setbacks rupture a sense of unmitigated immersion. Ball physics continue to be bit wonky, sporadically bouncing off both athletes and the ground as if it’s made of solid rubber. Players continue to lack situational awareness, and are often oblivious to the play unfolding around them. While custom playbooks are a welcome addition, building an off-field repertoire  a bit cumbersome. One example: removing or replacing a play tied to your team’s audibles requires coaches to jump into another sub-menu. 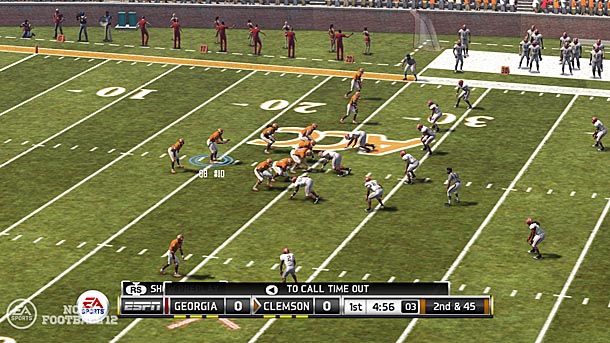 Despite some setbacks which restrain a varsity-level verisimilitude, NCAA Football 12‘s is an amazingly enjoyable title. From the game’s invigorating pre-game intros to an array of components which capture nearly every minutiae of college ball, there’s enough content on the disk to keep players engaged well past bowl season.