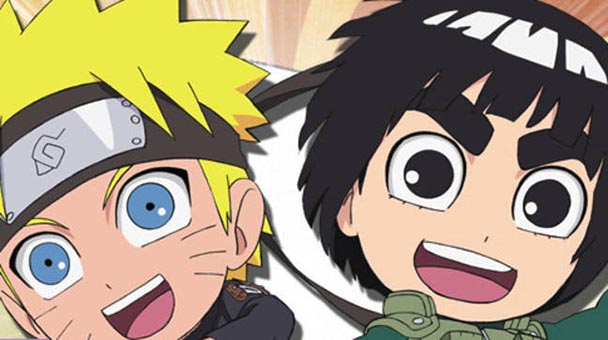 With story sequences which surpass the twenty-minute mark, the release of Naruto Shippuden: Ultimate Ninja Storm 3 is geared toward stalwart, console-owning, fans of the teenage shinobi. Fortunately, that’s not the case with the knuckle-headed ninja’s recent 3DS appearance, which requires neither a dogged devotion to the source material nor protracted play times. Instead, developer Inti Creates (Mega Man 9, Power Rangers Samurai: The Game) has crafted a whimsical brawler bolstered by a handful of light role-playing elements. While Naruto Powerful Shippuden may lack depth, there’s no denying that the game provides series supporters with an absorbing method to practice their jutsu on the go.

Although the title suggests that the budding hokage’s exploits will be the game’s main focus, Naruto shares the spotlight with the star of Rock Lee and Ninja Friends. In execution, the bushy-browed protagonist’s original exploits comprise half of the main campaign, complementing Naruto’s own Shippuden-inspired storyline. While rendered with a constrained quantity of 2D portraits, the game’s text-based dialog is routinely amusing, especially when characters break the fourth wall or exhibit impishness. Cleverly, the infrequent innuendo is concealed well enough to be overlooked by Lee and Uzumaki’s younger admirers. 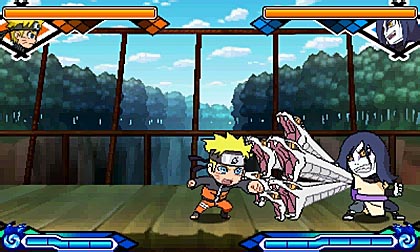 Each hero’s expedition begins with a multistage tutorial that explains the basics of combat. Expectedly, Naruto is a formidable force- able to pummel enemies by using the ‘X’ button to initiate ground and air-based combos. Both sly defensive dashes and potent powers can be summoned through the hero’s supply of chakra. From an autonomous assault by shadow clones, kunai throws, or other advanced skills that players can map to should button presses, there’s a wide variety of techniques. Naturally, a reliance on these authoritative attacks is constrained by the commodity, which gamers can refill by grabbing blue orbs or connecting with pedestrian strikes.

Conversely, Lee is unable to use ninjutsu and is reliant on an arsenal filled with brawny physical attacks called taijutsu. His offensive abilities can be augmented further if players activate the Eight Gates ability by touching an icon on the bottom 3DS screen. Here, Lee’s chakra supply is used to transform the character into a glowing blue whirlwind of destructive power, eliminating durable opponents with a few button taps. Like Naruto, the Team Guy member’s powers aren’t limitless, forcing players to plan their conversion. 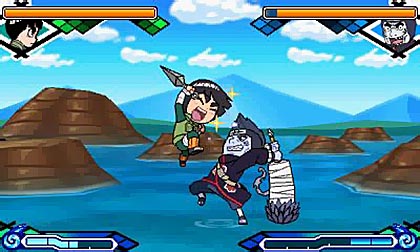 Initially, single-screen levels task the characters with merely eliminating enemies or surviving for a predetermined length of time. Later, challenges offer time-based courses across scrolling battlefields or require players to keep monsters from breaching a threshold. Mercifully, characters don’t have to overcome these stages singlehandedly, since Powerful Shippuden allows gamers to solicit the assistance of allies. Recalling the Marvel vs. Capcom series, a shoulder button press summons one of three support characters- whose usage are restricted by cool-down timers.

Across the game’s collection of over a hundred stages, combat tedium is destined to creep in. Mercifully, a few design decisions help offset the menace of monotony. Experience gained through the successful completion of levels can be spent in a variety of beneficial elements- from leveling up each character, buying additional attacks and power-ups, augmenting support characters. If a particular level becomes too tough for a character, players may even respect their character from scratch, putting experience into essential aptitudes like fortified resilience or pure, offensive power. 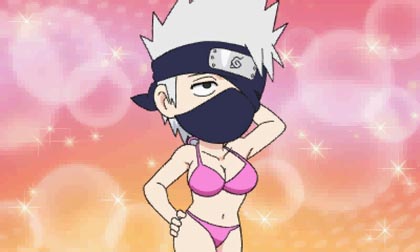 These pre-level preparations also allow players to adjust the difficulty of a level via customizable rules. With options such as “take no damage”, “clear with support characters only” or complete a stage within a pre-set time, gamers can boost their experience payouts if they adhere to these criteria. Pleasingly, failing to complete one of these trials doesn’t result in a penalty.

Visually, Powerful Shippuden’s super deformed aesthetic matches the game’s whimsical tone and playful mechanics. Although the game’s collection of sprites doesn’t exhibit the same fluidity as polygonal personalities, there are enough frames of animation to convey the basics of motion. Sonically, the game’s mix of traditional Japanese instruments, contemporary riffs, and fragments of dialog do an admirable job of mimicking the anime’s soundtrack. 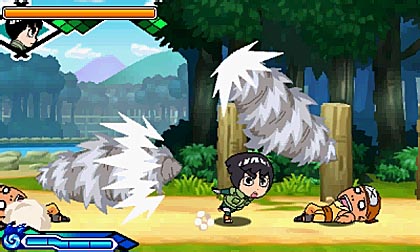 Even if someone were to strip away all references to its source material, Naruto Powerful Shippuden would still be an enjoyable, engrossing brawler.  Crafted around competent core mechanics and elevated by a crowd of customization options, the title is capable of charming casual beat-‘em-up admirers. Players with an interest in the manga or anime are destined to be browbeaten by Naruto and Lee’s overwhelming appeal.