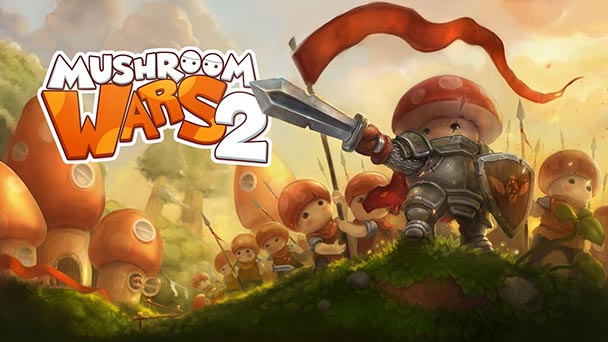 What is the concept: Following the devastation of earth, signs of life start to reemerge, as arid wastelands slowly turn green. From these embryonic lands, a multitude of mushrooms are sprouting. But distressingly, they seem destined to repeat the cycle of conflict that has plagued the planet. As such, different factions of fungi battle for domination, bringing a light-hearted, enjoyable, and slightly repetitive real-time strategy experience onto the Switch.

Conquest stages all play out similarly, placing a small battalion of ‘shrooms in teardrop-shaped villages. Left alone, the number of warriors in these settlements will steadily grow until they reach a predefined limit. Periodically, players have the opportunity to upgrade these communities, sacrificing a few fighters for a stronger defense, larger unit capacity, and faster production. Or they can opt to convert these outposts in towers that lack the ability to reproduce but fire at any nearby enemies. Alternatively, forges can be built to bolster your battle stats, trading unit production for stronger, forceful soldiers. Essentially, Mushroom Wars 2, pares down the real-time strategy genre to the essentials, removing factors like resource gathering to focus on engagements where area and army size matter most.

Conflict is most often initiated by directing a portion of a stronghold’s population to invade another tower. Pleasingly, ownership and strength of each fortification is clear, signified by color and a number overhead number that details the number of troops garrisoned inside. Similarly, a bar at the top of the screen shows the size of each army, offering a general assessment of faction strength. The ultimate goal is to overrun the land, making control of the landscape in Conquest mode, or key strongholds when playing Domination. 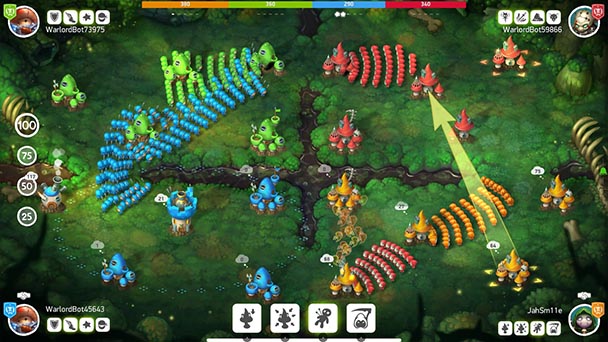 What are the game’s strengths? Real-time strategy on consoles have a decidedly mixed history, with genre entries habitually hampered by awkward control schemes. Mushroom Wars 2 was previously released on PC and mobile, and while the Switch version rejects the touchscreen-based input method of the latter, directing your mushrooms is a largely intuitive affair. Using a cursor to shift around towers, a trigger hold brings up an arrow to help direct your eager attackers. Pleasingly, the game remembers your last selection, making a blitzkrieg from an array of strongholds quite easy. Different tower upgrades and unit sizes are all mapped to the face buttons, but thanks to pop-up overlays, you’ll quickly be enhancing and sending out a variety of troop sizes intuitively.

Although Mushroom Wars 2 doesn’t use a substantial amount of art, the game makes good use of it’s economical supply of assets. Backdrops employ at painterly approach, while the tiny mushroom soldiers move in bullet-hell patterns until their demise generates translucent spirits that rise skyward. As such, the game’s art work is attractive while avoiding being so busy that it prohibits easy reading of the battlefield. Musically, the game employs vocal choruses and exotic rhythms, endowing the actions with an otherworldly texture that complements the peculiar confrontation between mushrooms. 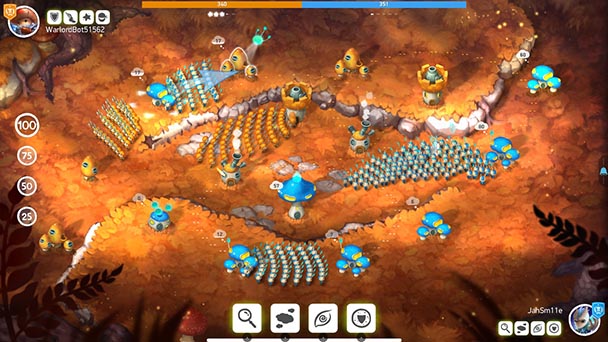 What are the game’s weaknesses? Beyond Mushroom Wars 2’s snub of touchscreen input, a few other faults occurred during play. Once the game hard crashed, requiring a system reset. Another oddity is the game’s hunt for an internet connection, even during solo offline play. While the game is always playable, periodically a nag screen emerges before jumping into a mode reminding players of the lack of internet connection. That said, when are online, the game’s matches are relatively lag-free if you are able to find a competitor.

Mushroom Wars 2 packs a healthy amount of content, with two separate campaigns, multiplayers matcher against local and online foes, and even the option to battle bots. Although there’s an attempt at variety with elements like boss battles and a mixing of starting situations across the campaign, play can grow tedious across long sessions. Parodically, battles can devolve into wars of attrition for a single tower, with supremacy repeatedly shifting back and forth. This can make the usual ten-to-fifteen minutes game stretch out much longer, if you don’t opt to restart the round. 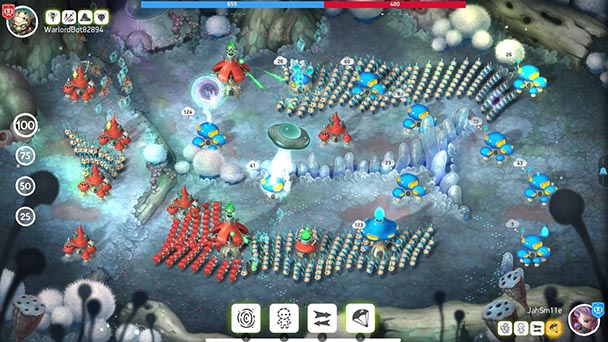 Is the game worth the asking price? The Switch iteration of Mushroom Wars 2 is priced five dollars more than the PC version, but its cheaper than if you were to buy all the piece meal content for the free-to-play mobile version. Commit to the twenty-dollar asking price and the title provides an amble amount of content, but like a buffet filled with nothing but mushrooms, you might get burned-out if you consume too much at a single sitting.

Mushroom Wars 2 was played on the Switch
with review code provided by the publisher.

Mushroom Wars 2
Platform: Switch, also available on PC, mobile
Developer: Zillion Whales
Publisher: Zillion Whales
Release date: July 5th, 2018
Price: $19.99 via digital download
Mushroom Wars 2 review
What is the concept: Following the devastation of earth, signs of life start to reemerge, as arid wastelands slowly turn green. From these embryonic lands, a multitude of mushrooms are sprouting. But distressingly, they seem destined to repeat the cycle of conflict that has plagued the planet. As such, different factions of fungi battle for domination, bringing a light-hearted, enjoyable, and slightly repetitive real-time strategy experience onto the Switch. Conquest stages all play out similarly, placing a small battalion of &lsquo;shrooms in teardrop-shaped villages. Left alone, the number of warriors in these settlements will steadily grow until they reach a&hellip;

Summary : Despite a few technical blemishes, Mushroom Wars 2 is enjoyable effort, especially if you’re yearning for real-time strategy on your Switch.