Posted by: Robert Allen in Review, Switch 2 mins ago 0 3 Views 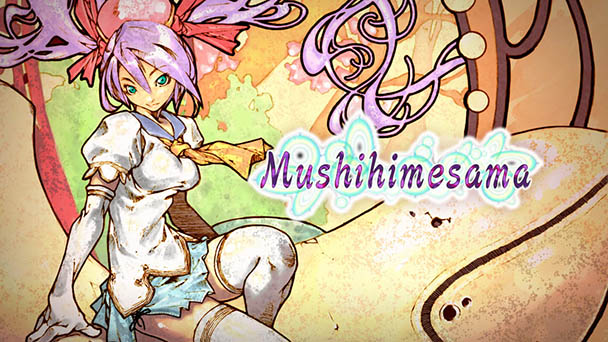 Cave’s classic shooter hasn’t always been easily accessible to Westerners. This release is the definitive edition, even if leaderboards and replay functionality hasn’t been activated. 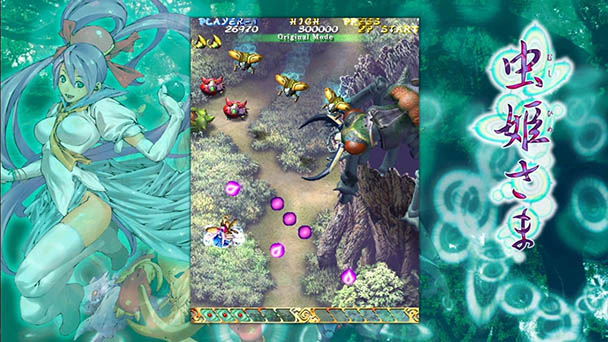 Although contemporary efforts might not arrive as frequent, the shoot ‘em up has enjoyed a rich forty-year legacy. From modest beginnings across a myriad of space-themed titles to modern ‘bullet hell’ games which fill the screen with an overwhelming number of projectiles, the STG has served as gaming’s consummate test of concentration.

As with all genres, some entries are superior to others. For shoot ‘em-ups, Tokyo-based CAVE’s output is widely considered paramount, with titles like DoDonPachi and Deathsmiles earning a devoted fanbase. Unfortunately, their esteemed efforts haven’t always proliferated across a variety of platforms, making it challenging for gamers to enjoy their arcade classics. 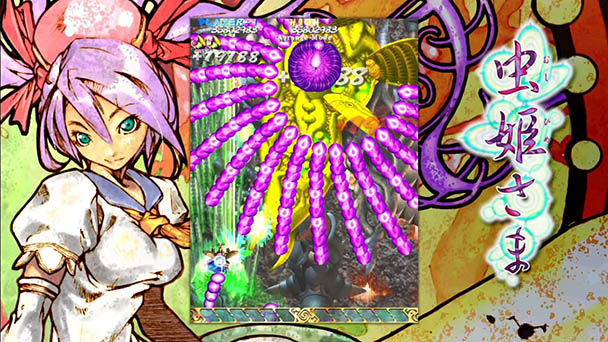 For 2004’s Mushihimesama, the stateside voyage was particularly problematic. Both a slapdash PS2 port of the arcade title and an arcade equivalent Xbox 360 adaptation never made the journey overseas. In 2011, iOS users received a mobile adaptation of the game, but that version become a relic when Apple hardware stopped supporting 32-bit apps. A PC version materialized in 2015, but even that iteration proved problematic. From having to adjust output resolutions by tweaking the game’s .ini file to locking Mushihimesama 1.5 mode behind a five dollar paywall, Cave fans deserved better.

Thankfully, the recently released Switch version makes amends, offering the definitive method for enjoying the bug-blasting classic. Sure, there’s a few snags at launch, but almost all of the crucial foundations are present. 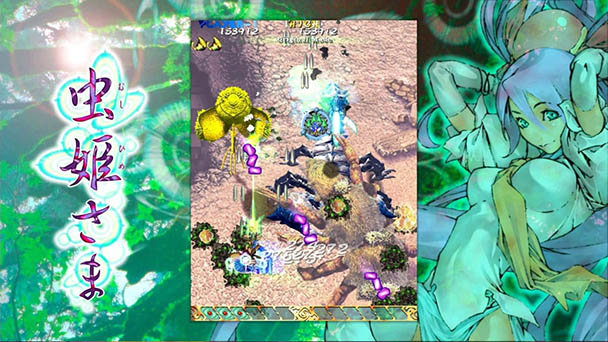 What’s most remarkable about Mushihimesama is the scalability, with a Novice Mode that’s ideal for STG newcomers. Sure, streams of purple bullets will streak across the screen, but it’s far removed from the blankets of projectiles depicted in most bullet hell games. Of course, shooter stalwarts will find plenty of challenge, with Ultra and Maniac levels offering not only an increased number of flying beasts and bullets, but also a stimulating scoring system.

Here, players can increase a score bonus by continually blasting baddies, with any pacifistic pauses reducing your windfall. There’s also an Arrange Mode where ships start with their firepower maximized and an ability to absorb a hit at the cost of consuming your only bomb. Like many modern shooters, there are options to view leaderboards as well as download and view replays. Being able to watch the pros conquer a shooter is the closest most of us will get to having a coach on an adjacent couch. But unfortunately, there two components don’t appear to be online for the game’s launch. 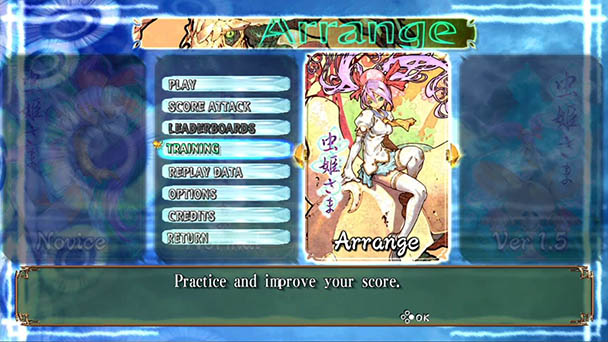 But all the modes in the world would matter little if Mushihimesama’s mechanics didn’t deliver. They do, offering an elaborate ensnarement of risk/reward options. When starting a game, players have the ability to select from three different weapon systems. With choices between a focused energy beam, a steady stream of fire, or even a spread shot, each selection offers a distinctive balance between attacking angle and strength of enemy penetration. Mercifully, you’re not locked into a specific weapon for the entire five stage expedition. Power-ups dropped from executed enemies offer to augment your current weapon. But let them float around for a few seconds and they’ll issue one of Mushihimesama’s other powers.

Gradually, other nuances are revealed. While players can hold a button down for to deliver a steady stream of retribution, letting go or even tapping the button endows the protagonist with greater movement speed, allowing for the evasion of an encroaching enemy bullet. A similar tension is found in the pickups left by grounded foes. While airborne antagonists drop bonus items that are automatically attracted to players, earth-bound enemies leave score augmenting articles that can draw players into fields of fire. Although Mushihimesama’s quintet of levels might seem succinct, there’s plenty of surprises to be found. One example: learn the layout of each level, and you’ll discover insects, which when killed remove bullets from the screen.

A Multitude of Modes

Undoubtedly, Mushihimesama’s journey to Switch is rooted in emulated arcade code. When starting the game, you’ll see a tweaked copyright screen, which was seen when powering on the original cabinet. Pleasingly, the game provides players with a multitude of options. If you own a Flip Grip or an equivalent device, you can enjoy playing in tate mode, which rotates the screen, providing for vertical orientation.

Should you want to hold your Switch in a traditional horizontal manner, Mushihimesama can fill up the vacant sidebars with two sub-windows that duplicate the on-screen action. It’s not practical for play, but it can enliven things for onlookers. Similarly, the game offers a host of other customizations, with full key remapping and the ability to adjust the rate of auto-fire. Along with the Original, Maniac, and Ultra play modes, there’s granular difficulty adjustments. From the number of player ships, a quartet of difficulties, and the scoring for first and second extend ship, there’s a profusion of flexibility. 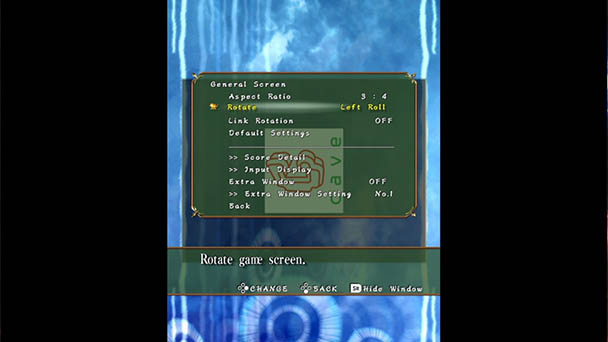 But more importantly, Mushihimesama bundles the Novice, Normal, and Arrange, and Version 1.5 modes (aka Matsuri Mode) without any additional charges. The latter will probably delight historians, recreating the 2011 arcade re-release with variations like a brighter color palette, remixed soundtrack, and altered enemy placements.

Even with leaderboards and replays unavailable, Mushihimesama is a requisite purchase for STG fans of all skill levels. Whether your skills dedicate a projectile purgatory or a furious bullet hell, the game is one of the genre’s better efforts. Defeat never feels unwarranted, with the title emphasizing each perilous projectile and malicious ground-based menace. Given enough study and fortitude, Mushihimesama makes you feel like you can confront inevitability, cheating death with reflexes that would make the devil envious.

Mushihimesama was played on the Switch
with review code provided by the publisher.

Mushihimesama (Switch) review
Cave&rsquo;s classic shooter hasn&rsquo;t always been easily accessible to Westerners. This release is the definitive edition, even if leaderboards and replay functionality hasn&rsquo;t been activated. Although contemporary efforts might not arrive as frequent, the shoot &lsquo;em up has enjoyed a rich forty-year legacy. From modest beginnings across a myriad of space-themed titles to modern &lsquo;bullet hell&rsquo; games which fill the screen with an overwhelming number of projectiles, the STG has served as&hellip;

Summary : Typically, prudence would dictate avoiding a game filled with bugs. But with the Switch port of Mushihimesama, insect annihilation is polished taking players with pulverizing a persistent procession of projectile-pelting pests.