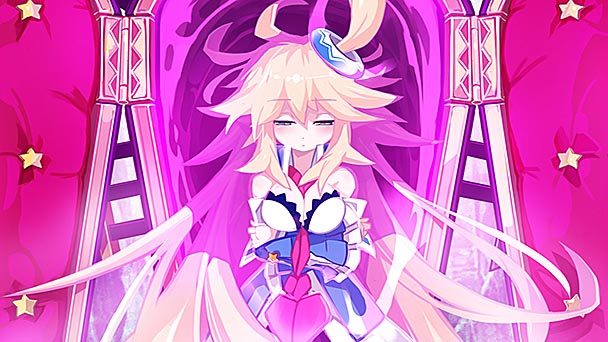 Undoubtedly, 2012’s Mugen Souls had its share of problems, burdened by longwinded dialog sequences, an abysmal framerate, and a battle system laden with convoluted mechanics which rarely enhanced the role-playing experience. But look past these setbacks, and the Compile Heart-developed title provided one of the most unabashedly otaku-indulgent journeys of the console generation. Filled with playful peeks of pantsu and ogling at moe underboob, the game became an exercise in JRPG wish-fulfillment, extending a five-figure level cap and a storyline which became exponentially more eccentric as players progressed.

Unsurprisingly, the recently released sequel- Mugen Souls Z, plots a parallel path. Although still hampered by a number of design and technical hitches, the title delivers a healthy helping of fan-service that’s roughly equivalent to a weeklong stay in Akihabara. But, if the thought of an implicit tentacle attack instigating a profuse nosebleed doesn’t tickle your funny bone, you’ll might to seek out the gratification of a more mainstream role-playing game. 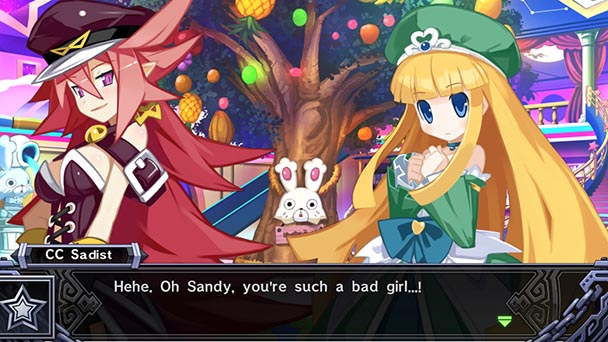 Having subjugated the seven worlds of Mugen Souls, returning protagonist Chao-Chao learns of another sovereign galaxy. Naturally, the “undisputed goddess” can’t resist the lure of universal domination nor the possible procurement of additional peons, and begins her journey on an otherwise unassuming planet. There she encounters Nao, a treasure hunter, along with Syrma, a goddess who recently awoke from the confines of her coffin. Sensing that the casket is what attracted the loot pursuer, Chao-Chao inquisitively steps inside and becomes trapped. Within minutes she’s stripped of her godly powers and reduced into adorable chibi form. While she forfeits Mugen Souls Z starring role to Syrma, the diminutive Li’l Chao-Chao’s ambitions receive only a slight amendment- as she must conquer twelve worlds through Napoleonic determination and a generous helping of moe-infused muscle.

Drawing from the medium of the visual novel, a majority of the first few hours of the game is spent amidst conversation between the histrionic cast members. Regretfully, Mugen Souls Z demonstrates the same unchecked loquaciousness of the first game- with dialog intermittently supplying neither humor, expositional elements, nor character development. Yet, get past the preliminary hours and the game’s focus begins to sharpen and the quantity of innuendo increases. While NIS America habitually delivers strong localizations- here it’s especially well done. Quite often, players might question whether the game’s insinuations are deliberate or whether their own pervy perceptions are making an otherwise innocuous dialog seem lascivious. Other times, the team abandons any semblance of subtlety, crafting a ceaseless cavalcade of puns around the word ‘peon’. 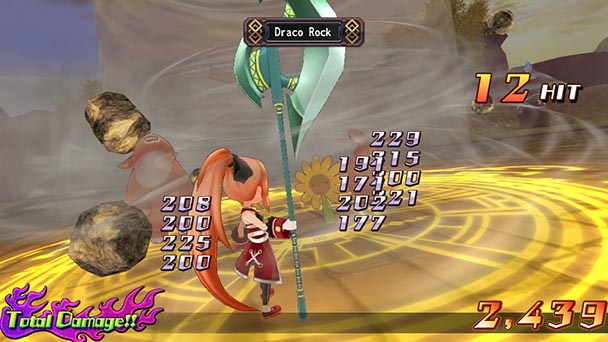 For many, Mugen Soul Z’s sense of lasciviousness will be the game’s fundamental draw, although a number of other elements are engaging. Combat retains the character positioning practice of its predecessor, permitting players to attack with a party of four members as well as a roster of reservists. The turn-based contests are elevated by the inclusion of orbs around the battlefield, which act like Disgaea’s Geo Panels, creating zones that alter stats- such as spheres where physical damaged is either raised or reduced. Syrma demonstrates the ability to captivate enemies by appealing to their preoccupations. Much like Chao-Chao’s Moe Kill, Fetish Poses cause the character to adopt different postures, with success either converting an enemy into a peon or item. Misjudge your foe and they’ll turn enraged- increasing their stats significantly. Fortunately, choosing the right pose doesn’t depend on memorization but rather the reading of an emotion gauge. Over time, additional meters begin to spring up on-screen, contributing new complexities to combat as well as allowing gamers to release the devastating Damage Carnival or Ultimate Soul on resilient opponents.

Complementing the ground-based skirmishes are the return of G-Castle Battles. Beyond serving as your base of operations, and transport between realms, your bastion is also a battle-ready mecha. Essentially, interstellar encounters are still Rock-Scissors-Paper-like events where players speculate on the CPUs course of action. What makes these events interesting in their links to other parts of the game- with collected Peons helping to bolster the resiliency of your sky-based stronghold. 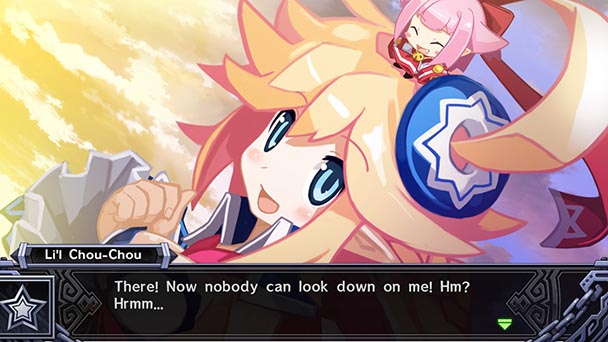 Although the battle systems offers a few variations from Mugen Souls’ mechanics, amendments can be found elsewhere. The Peon Salon extends the ability to recruit and cultivate a custom character. And while it’s a noble gesture, in execution leveling up the game’s pre-rolled characters involves a bit less grinding. More interesting is the game’s clothing system which allows for both stat-increases as well as a number of gender-bending possibilities- allowing for male characters to don breasts and long, luxurious manes.

Although many of Mugen Souls’ rudiments have been retrofitted, the game’s aesthetics remain largely the same. Character portraits continue to be the game’s visual enticement, flaunting well-drawn expressive art work. However, once the game uses polygons to render its realms, quality slips. Not only are environments small and populated with a condensed number of environmental details, but Mugen Soul Z’s framerate habitually hovers around the high-teens. Fortunately, the game’s aural elements fair better, with quality voice overs in both Japanese and English. Likewise, the game’s soundtrack is commendable, extending plenty of eccentric melodies which match the loopy plotline. 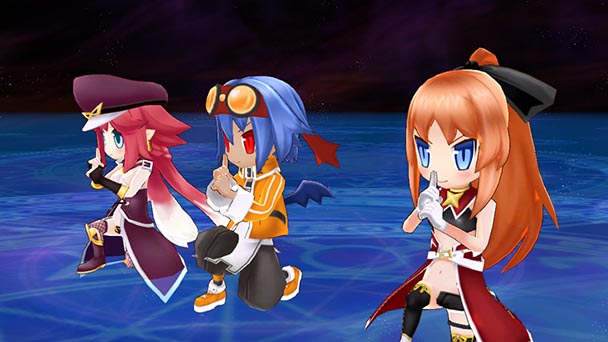 Despite several technical and design issues, journeying across Mugen Soul Z’s dozen worlds (thirteen for the ‘good ending’) remaining an enjoyable endeavor. Elevated by a plotline which edges into ecchi, the title’s impish humor, capable battle system, and character art are certain to please the NIS’ faithful fans- once they get past some of the discursive dialog.

Mugen Souls Z was played on the PlayStation 3 with review code provided by the publisher.

Mugen Souls Z Review
Undoubtedly, 2012&rsquo;s Mugen Souls had its share of problems, burdened by longwinded dialog sequences, an abysmal framerate, and a battle system laden with convoluted mechanics which rarely enhanced the role-playing experience. But look past these setbacks, and the Compile Heart-developed title provided one of the most unabashedly otaku-indulgent journeys of the console generation. Filled with playful peeks of pantsu and ogling at moe underboob, the game became an exercise in JRPG wish-fulfillment, extending a five-figure level cap and a storyline which became exponentially more eccentric as players progressed. Unsurprisingly, the recently released sequel- Mugen Souls Z, plots a parallel path.&hellip;

Summary : Disregard the reviewers who can’t appreciate a bit of libidinous otaku humor- Mugen Souls Z is routinely laugh-out loud funny. The downside are the occasional sections between the snickers.

Previous: Scram Kitty and His Buddy On Rails Review
Next: New Game Releases: May 23rd-29th, 2014