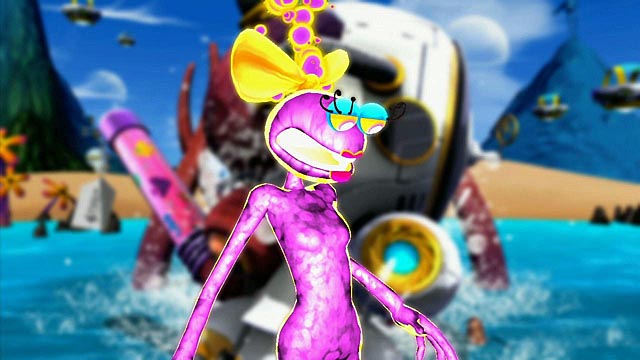 What is the concept? Revisiting the ingenious mechanic  which propelled 2009’s ‘Splosion Man to critical and commercial success, Twisted Pixel’s latest game requires players to cultivate Olympic-level triple-jumping skills. Each of the fifty levels which compromise Ms. Splosion Man‘s campaign defy completion, challenging gamers to spontaneously combust, propelling them higher and further with each button-initiated blast. Wisely, the title requires more than just razor-sharp reflexes, as players must quickly determine how a trio of detonations can propel the Ms to the protection of the next platform.

While many of the original game’s hazards make a reappearance, a number of new tools have materialized to assist Ms. Splosion Man on her perilous and often infuriating journey. Floating zip-lines allows the lithe lady to soar above danger, while Donkey Kong Country-like cannons propel the volatile vixen across deadly gaps. Pleasingly, the title often transcends interior environments, sending the Ms. jumping across hover cars, Fifth Element style. 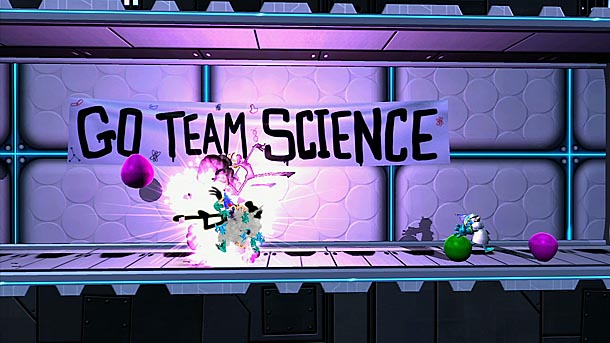 Staying true to form, Twisted Pixel’s inspirations and variations whiz by at a breakneck pace. One moment, players are choosing their next trial from a Super Mario Bros. 3-like map, then the next  instant they are trying to eliminate a spiteful scientist through a series of Rube Goldberg-styled events. Likewise, Ms. Splosion Man delivers a continual stream of pop-culture references, singing No Doubt’s Just a Girl or quoting Dirty Dancing, as she sashays across walkways with an ostentatious strut.

Would I enjoy the game? With vibrant visuals, a grin-inducing sense of humor,  and a wonderfully effervescent soundtrack, Ms. Splosion Man‘s charms are difficult to resist. As a delightful deviation on the archetypal platforming formula, the title will certainly appeal to gamers seeking a fresh take on the genre, as long as they don’t mind a vigorous challenge. 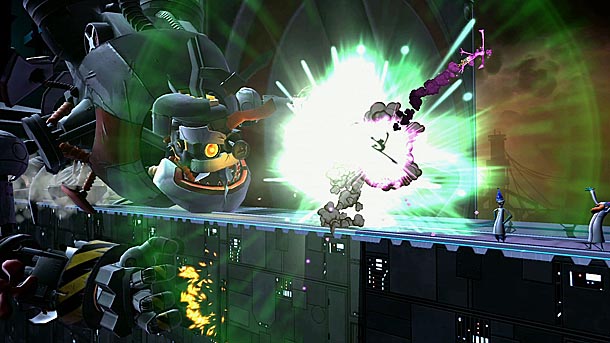 What are the game’s strengths? From a separate multiplayer campaign for up to four participants, a leaderboard which monitors level scores and completion times, to an vast supply of unlockable movies, photos, and songs- the title packs a cornucopia of content into a 2 gigabyte download. Additionally, the game’s transitory special challenges promise to keep the title fresh, while adding stimulating contest opportunities. Currently, players must escape from a pursuing Mr. Destructoid. Although the critical separation between development studio and editorial outlet have been compromised a bit, it’s likely most gamers will appreciate the synergistic offering.

What could have been improved? Much like its predecessor, Ms. Splosion Man can be exasperatingly difficult. Whereas early levels can be traversed with intelligence and improvisation, later stages require  rote memorization. Sure, the game allows players to leap to the next checkpoint after successive failures (corrupting both completion time and the shape of Ms. Splosion‘s posterior), but this just feels like a makeshift solution, rather than well scrutinized level design. At least the game’s most strenuous stages are mercifully optional. 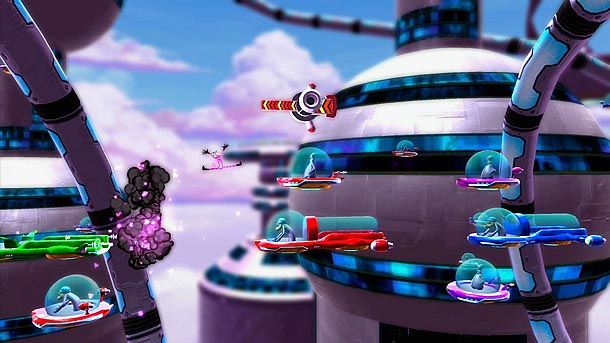 Is it worth the money? Few ten dollar titles feel as satisfying  and substantial as Ms. Splosion Man. With disk-based diversions becoming a scarce in the summer months, Twisted Pixel’s latest has exploded onto the Xbox Live Arcade at an ideal time.