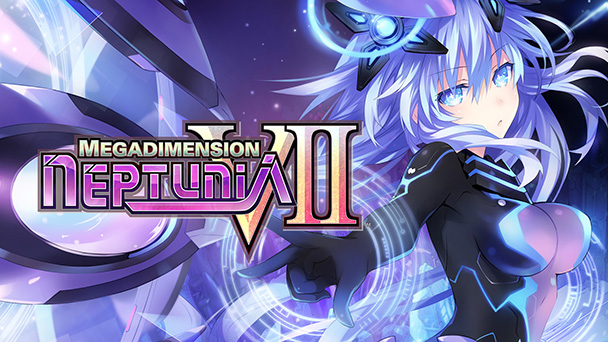 Across the early part of the millennium, message boards were proclaiming the death of the Japanese role-playing game was imminent. Stagnancy seemed to be the genre’s unassailable final boss, and developers had run out of creativity-restoring potions. But the 2011 release of Hyperdimension Neptunia demonstrated that originality wasn’t entirely absent. The Idea Factory and Compile Heart-developed title imagined a clever allegory where a quartet of anthropomorphized game consoles vied for market share and battled the scourge of software piracy. Beyond this playful representation of the real-world industry, the game delivered a procession of comical references and a playful sense of impishness.

But despite its redemptive plot-based charms, the original Neptunia also had its share of issues. Mechanically, allowing AI to manage the use of health potions proved frustrating while battles moved at a plodding pace. Visually, the game was inconsistent, with dazzling portrait art undermined by a lethargic framerate and bland environments. But across two sequels (which were later remade, remixed, and rebranded as the Re;Birth games) Neptunia gradually mended many of its transgressions, growing into the JRPG which would help quash those “end is neigh” prophecies for the genre. 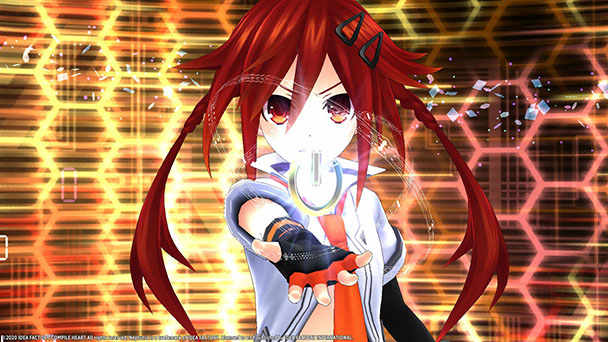 But since the release of 2015’s Megadimension Neptunia VII, the franchise itself has seemingly struggled to find a way forward. In the past five years, there have been no canonical sequels, only an action-RPG that emulated an MMO, a middling side-scrolling action game, a couple of card-battlers, and a retro-inspired shooter. Now five years on, the Switch release of Neptunia VII offers another iteration of the title, following the 2016 PC port, and the 2018 revision that added virtual reality elements. While Ghostlight’s adaptation endows you to play Megadimension on the go, franchise fans might long for a new adventure.

Officially conceived as a trio of standalone titles, Neptunia VII is split into three different acts. Each chapter takes place in a different dimension, offering its own distinct cast. Initially, Neptune and Nepgear are transported to an alternate dimension which resembles a devastated Planeptune. There, the duo runs into Uzume Tennohboshi, who obviously represents SEGA’s Dreamcast, complete with a swirling logo on her necktie and a VMU-like communicator strapped to her wrist. Although Uzume’s outward appearance is stern and uncompromising, the girls sense contrivance when the crimson-haired CPU transforms into Orange Heart, revealing an HDD personality that’s cordial and childlike. 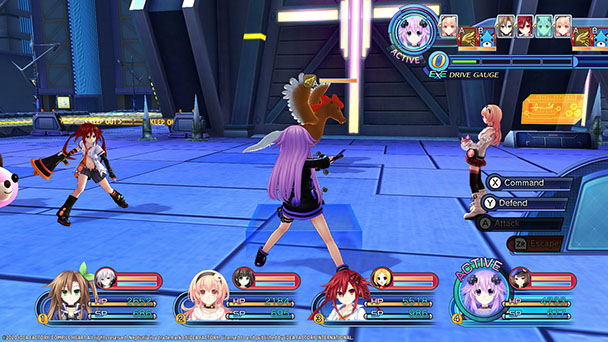 Anthropomorphic Corporations and Other Quirks

For the game’s second act, Idea Factory and Compile Heart exhibit their expertise for transforming Publishers into idiosyncratic characters. Here, the game gives a gentle ribbing toward Bandai-Namco, Capcom, Konami and Square-Enix. Expectedly, each Gold Third member is vying for dominance across Gameindustri, resulting in gags that revolve around Metal Gear Solid dialog, LovePlus-style dating sims, and alternate forms which recall Sephiroth’s solitary, black wing. For dedicated gamers, spotting all the allusions will be delighting, especially when they’re dispensed with rapid-fire delivery. The sole downside revolves around the structure. While Neptunia VII’s middle chapter ends with a converging cast, shifting between small teams during the bulk of the campaign feels like a prolonged exercise in delayed gratification.

Unsurprisingly, the game’s third act does a commendable job to linking the two previous journeys, endowing the game with an appropriately rousing finale. Like the two proceeding acts, conversations feel more restrained, with fewer of the loquacious interludes that disrupt dungeon skulking. Sure, there’s still the occasional longwinded interchange without payoff or the sporadic need for CPUs to shirk their clothes for an impromptu communal shower- but largely the game tries to adhere to its narrative structure. And while the prospect of nubile goddesses depicted almost au naturale will infuriate the prudish, near-nudity is presented playfully. Often when supplying fan-service, the game simultaneously satirizes it. 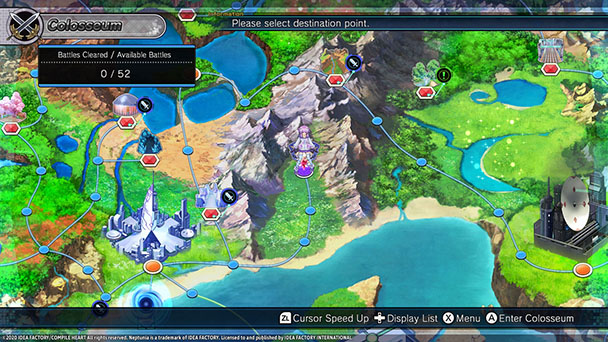 Battles mechanics don’t veer from the systems established by 2012’s mk2. Combatants begin fracases in customizable party formations, with a timeline establishing turn order between comrades and creatures. Upon each turn, characters can move a predetermined distance, as they try to enclose enemies in a translucent zone that depicts their melee range. The traditional options for combos focused on Break, Power, and Rush attacks remain, with change imposed on the EXE gauge, which now resets between battles.

The other big alteration occurs when the battle party can surround an enemy. When this occurs, players will see a line connecting friendlies, while an option in the menu system allows for the execution of a powerful team-based attack. Neptunia VII’s other significant addition allows the CPUs to achieve a second level of transformation, called a NEXT form. Although characters must switch through HDD mode first, seeing the new costume designs and witnessing their destructive capabilities is quite a treat and easily worth the effort. 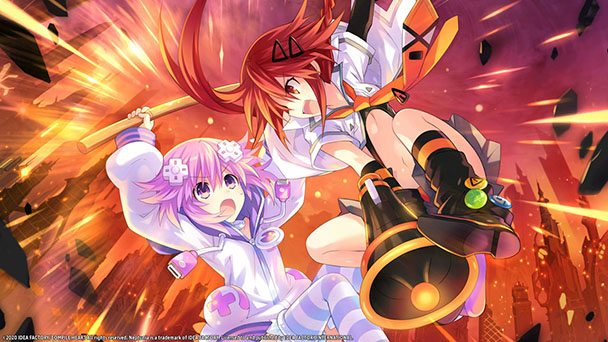 Despite being turn-based, combat feels nimble with party members flaunting speedy attack animations and as well as the ability to fast-forward through enemy turns. On the downside, battles can be a bit uneven. One early dual-stage boss confrontation trounced the adventuring party multiple times, but after that defeat, things became significant easier- perhaps even too tranquil when compared to the challenge level of other Neptunia titles. But for players seeking adversity, the inclusion of Neplunker, a mini-game based on the MicroGraphicImage classic, Spelunker, extends an elevated level of difficulty. But woefully, exertion stems just as much from Neptunia’s rudimentary modeling of jump physics as it does from level design.

Switch Performance Compared
As Switch ports have revealed in the past, Nintendo’s hybrid console can struggle to match the fidelity, fluidity, and superfluities of a system like the PlayStation 4. This is persistently evident when playing Megadimension Neptunia VII in both handheld and docked mode. You’ll have to look past the sacrifices found here to enjoy the game on the go.

The game’s opening cinematic demonstrates the expected, with pre-rendered cutscene running without a hitch. But when the game is asked to depict dungeons and battlefields, that is where things waver. Expect everything from extended framerate drops, abbreviated draw distances, and pop-in to afflict the action. If you’re particular about these things, you’ll probably want to stick with the PlayStation 4 and PC iterations of Megadimension. This version is for Switch with a predilection for portability. 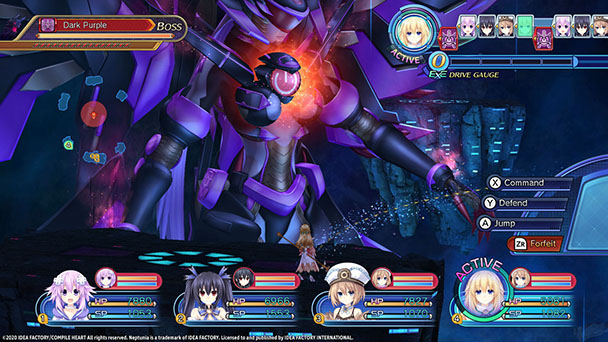 Much of the visual blemishes on the Switch version of the game stem from the elevated ambitions of the original game. Just like the original release, the character art used during conversations is exquisite, providing each personality with a range of comical emotions and reactions. In keeping with tradition, enemy design is delightfully eccentric, with players battling everything from Super Mario Bros. warp pipes to dating sim screenshots. In fact, the only disappointing graphical element is the starkness of dungeon environments. Often, these milieus are so non-descript, you’ll be forced to consult the map screen when navigating. Socially, the game’s soundtrack establishes a new watermark for the series, with each act contributing its own distinct vibe.

Although Megadimension Neptunia VII’s trio of storylines extends an inviting inroad for newcomers, the title does require a certain level of role-playing familiarity. While Histoire is back with her static-screen lessons, this method still breaks up the flow of gameplay and doesn’t explain many of Neptunia’s nuances. As such, the Goddesses latest adventure feels tailored for faithful fans, who might have played through the game’s previous mainline releases. Although sacrifices were made for Switch, Megadimension pleasing play and comical conversations demonstrate the franchise’s competence. Let’s hope the wait for canonical sequel isn’t too long. 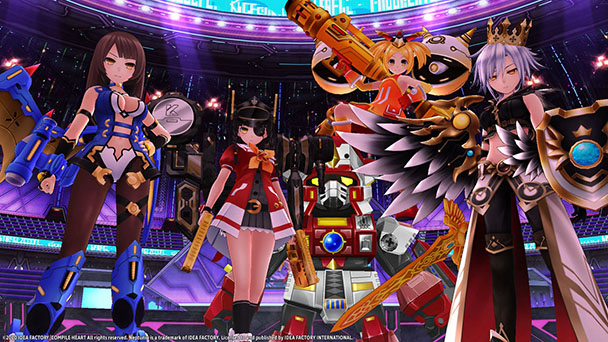 Megadimension Neptunia VII was played on the Switch
with review code provided by the publisher.

Megadimension Neptunia VII (Switch) review
Across the early part of the millennium, message boards were proclaiming the death of the Japanese role-playing game was imminent. Stagnancy seemed to be the genre&rsquo;s unassailable final boss, and developers had run out of creativity-restoring potions. But the 2011 release of&nbsp;Hyperdimension Neptunia&nbsp;demonstrated that originality wasn&rsquo;t entirely absent. The Idea Factory and Compile Heart-developed title imagined a&hellip;

Previous: Teeing Off with GolfTopia (Early Access)
Next: Destroy All Humans! (2020) review 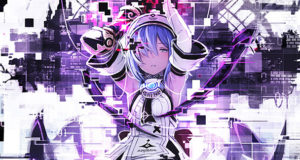 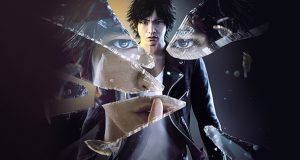 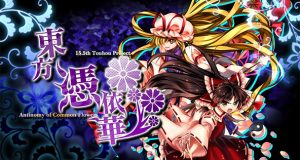