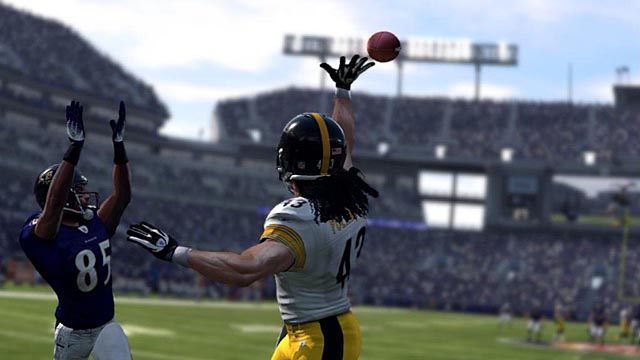 Traditionally, when a new iteration of Madden NFL is released, it might take a few hours before gamers uncover developer Tiburon’s off-season handiwork. That isn’t the case with Madden NFL 12. Within seconds of booting up the title, players will notice the sweeping changes made to the game’s presentation. From elegant blimp shots high above stadiums (complete with the moving traffic), meticulous recreations of team entrances, to athlete’s kicking up divots of 3D grass, earnest efforts were made to reproduce the nuances of a television broadcast. Even the game’s lighting has been given a subtle revamp, adjusting the trajectory of sun to deliver convincing shadows. Having attending games at the O.co Coliseum, Candlestick Park, and Qualcomm Stadium, I was amazed at Tiberon’s fastidious recreations of illumination. All that was missing was the scent of watered-down beer to make the simulation complete.

As impressive as some of these visual trimming are, they can’t mask that the Madden engine is in need of an overhaul. On the Xbox 360, the disc loads incessantly, as players sporadically sputter around during play selection. Similarly, players occasionally slide along after the whistle is blown, further blemishing the game’s aspirations for a broadcast-quality presentation (although an installation to the 360’s hard drive improves things considerably. Aurally, much of Gus Johnson and Cris Collinsworth’s banter has been recycled from last year’s game, with each broadcaster delivering conspicuously ambiguous commentary. It’s almost amusing to hear the duo persist with their mundane observations while a huge play unfolds. 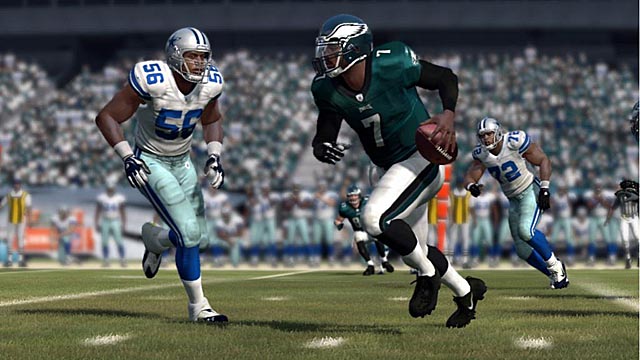 Although Madden 12’s superfluities are hit and miss, most of the game’s on-field action is consistently solid. The developer has augmented the animation of athletes with three distinct running varieties and five ball-carrying styles, as well as a slew of player-specific moves. As such, Tony Romo throws authentically, exhibiting the type of trademark quick-release which can stymie a blitz. A revamped collision system eliminates much of the magnetic tackling, blocking, and catching of previous iterations, giving players full control of a player until the moment of impact. With the integration of a hundred new tackle animations, Madden’s offensive and defensive game is bolstered, as collisions examine the direction, speed, and heft of players. Now, players react realistically- deflecting glancing smacks, while submitting to huge head-on hits, removing what often felt like concealed dice rolls by the game. 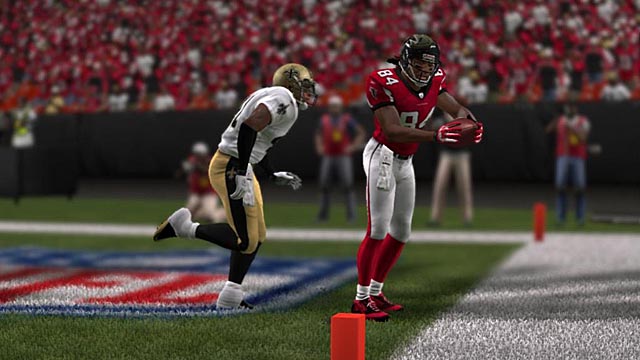 When the Saints go marching in too slowly.

Jumping to Madden NFL 12’s play modes, a number of key changes have been made. With only one serious alteration to the game’s online franchise component (players can now manage their own leagues through myleaguemanager.com) the focus was on tweaking the offline campaign. The addition of Dynamic Player Performance (DPP) tracks a player’s every in-game action, adjusting their confidence level and AI tendencies accordingly. While November slumps can be debilitating, the joy of seeing a player regain their groove in the post-season can be euphoric.  With EA’s online pass (included in new copies of the game), players can opt to track the highs and lows of actual athletes, allowing gamers to engage in absorbing, “what-if” scenarios. Couch coaches also are given the opportunity to strategize in the off-season by courting free agents and scouting rookie talent. Although players are given the leniency of a 75-man roster, they’ll have to make some imperative decisions on cut days. Regretfully, the lack of any type of training camp to access a recruit’s true potential limits the selection process. 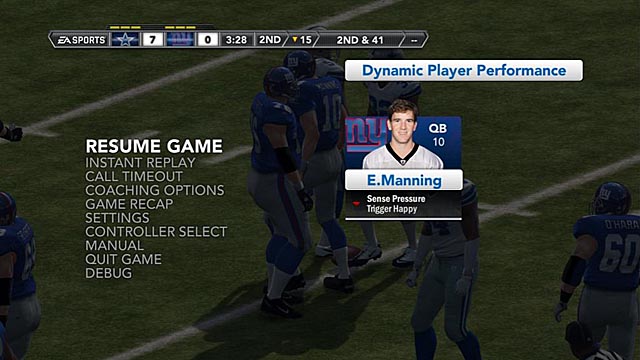 Eli Manning is about one sack away from "paranoid".

All the other additional modes from Madden 11 also return, from the card-collecting found in Ultimate Team, tracking an athlete’s trajectory in ‘Be a Star’, or momentum reversing of Madden Moments. While Madden NFL can be stingy (and punitive with stern penalties for shortened quarters) when issuing the currency in Ultimate Team, building a fantasy franchise’s roster remains an involving diversion, as players amass player, uniform, and even stadium cards. Per fan request, an elaborate online trading system has been implemented this year, which should boost the component’s popularity. Of all the auxiliary modes, the RPG-ish Superstar diversion remains my favorite, as players train and augments the stats of their aspirating athlete.  Smartly, progression comes quickly. Within a few hours my prodigious Tarheel QB (imported from NCAA 12) had been drafted by Carolina, where he was spearheading the Panthers to a winning season.

Surviving an exodus by longtime Tiburon veterans Phil Frazier and Ian Cummings as well as a summer lockout that pushed the game back three weeks, Madden NFL 12 has overcame adversity, delivering one of the most rewarding on-field experiences since the beloved NFL 2K5. From fan-motivated changes such as custom playbooks and online communities, this year’s iteration of the long-running series serves up a season of satisfying gameplay. With a new graphical engine, a training camp, and a few easily accomplished tweaks, next year’s Madden could be undeniably Bowl bound. 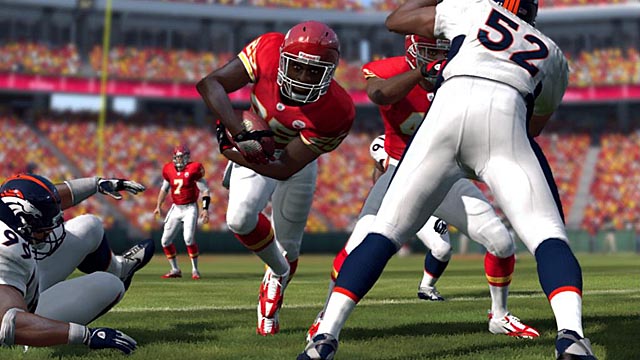 Previous: New Releases for the Week of August 28th, 2011
Next: Line and Reason- Lucid Review