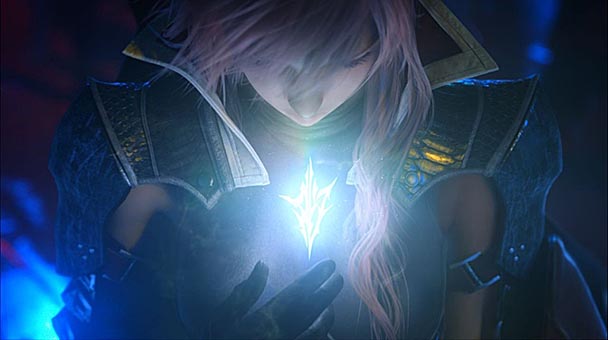 Not long ago, hardware and software developers were given near-absolute creative freedom. But over the years, the cost of game production escalated, thereby increasing the involvement of risk-avoidant publishers. The proliferation of game journalism has also reduced the autonomy given to creatives- as evidenced by Microsoft’s backpedalling on the Xbox One’s digital right policies and the pressure on BioWare to attune the conclusion of Mass Effect 3. Undoubtedly, one of the most interesting interchanges between auteurs and audience has been the dialog which shaped the trajectory of each subsequent entry in the Final Fantasy XIII series.

The original game demonstrated Square-Enix forsaking many franchise tenets- instead, the developer aimed to deliver a cinematic experience poised to pull in new fans. From the game’s inception, director Motomu Toriyama’s aspiration was for Final Fantasy XIII’s combat to resemble the battles in the computer generated film, Final Fantasy VII Advent Children. Although Toriyama was largely triumphant in that effort, the remainder of the game wasn’t as successful- with the Crystal Tools game engine often sacrificing flexibility for visual fidelity. In short, the 2010 title disappointed many players with a linear trajectory, shortage of NPC interaction, and shortage of mini-games. 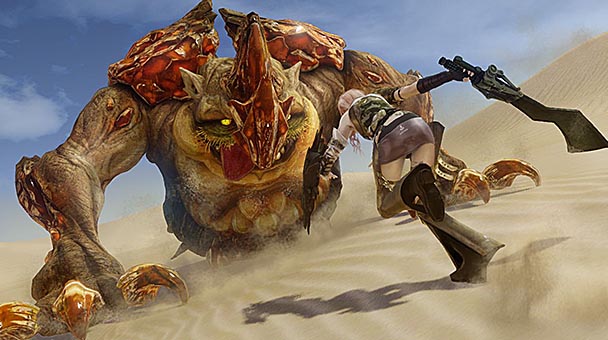 For the 2012 sequel, Final Fantasy XIII-2, Square-Enix responded to fans, obediently incorporating each request. Yet, while the game provided players with multiple pathways, more side quests, collectable monsters, and casino mini-games, the storyline felt overstretched in an effort to accommodate these new components. Sure, the inclusion of time travel granted gamers additional freedom, but the mechanic was never fully explained during XIII-2’s often loopy narrative. For the release of Lightning Returns: Final Fantasy XIII, the developers once again adopt the adage of ‘giving the people what they want’. Much like XIII-2, the method largely works, albeit with a few setbacks.

Set 500 years after the conclusion of the XIII-2, Lightning Returns delivers a powerful prologue, reuniting the eponymous character will a remarkably sullen Snow. Yet, far more pressing than the disposition of the last remaining l’Cie is the fate of the world- Nova Chrysalia is careering toward imminent destruction in thirteen days. A previously unmentioned god named Bhunivelze appoints Lightning as savior, tasking her collecting as many souls as possible. With inclusions such as a base of operations named the Ark, Lightning Returns’ plotline is unapologetically rooted in Christianity- a decision which demonstrations the series’ continued efforts to woo Western audiences. 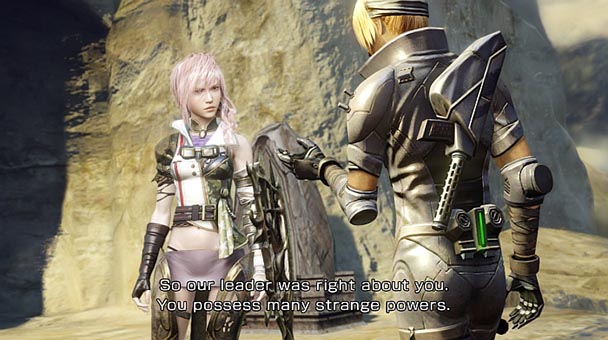 For players who missed XIII’s last two installments, Lightning Returns does an admirable job of embedding key crucial plot elements into cinematic and dialog. For those who did their best to follow the intermittently cohesive narrative, these recaps can feel a bit patronizing; fortunately they are typically brief. More concerning is the occasional attempts at humor in an otherwise somber storyline. Seeing the realm’s redeemer making jokes while donning a spinning propeller hat or anachronistically dressed as Lara Croft feels at odds with the title’s theme of cataclysmic urgency.

The game’s prodding sense of exigency is certain to be a contentious decision for role-playing aficionados. In execution, one hour of gameplay is equal to a day in Lightning Returns. Mercifully, dialog and cutscenes pause the game clock while the competition of missions rewards players with additional time. Even more lenient is the game’s sense of freedom- players have carte blache to explore any of the four areas and to work on a multitude side quests and main missions. The upside is that if players reach an impasse or just grow tired of a certain zone, they can move on to another tasks. Unfortunately, some of the non-essential errands don’t feel fully realized. Without the benefit of intel or a quest marker, locating cats, a certain book, or Chocobo medicine across the game’s expanses can feel like fool’s errands. Narratively, hunting for these trinkets amidst the backdrop of a looming armageddon doesn’t make a lot of sense. 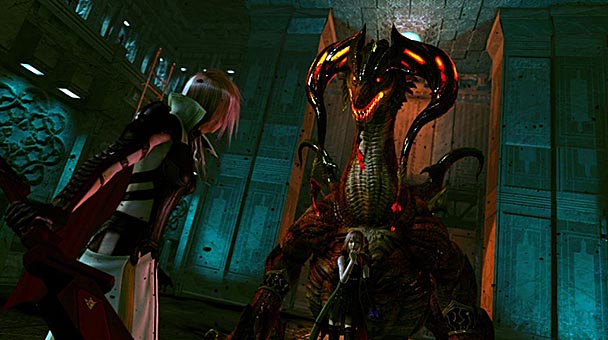 The decision to set Lightning Returns against a doomsday clock radically changes the way you’ll play the game, as well. Without external guidance or an astute sense of prioritization players will most likely witness the end of the world. Aware of this, Square-Enix had provided a New Game+ option, allowing Lightning to retain her HP and Strength stats, items, and consumables as she attempts to save the world anew. Although this Dead Rising-like methodology most likely means players are in for some repetition, replay with a powered-up protagonist can feel invigorating as gamers trump once-formidable foes.

Undeniably, Lightning Returns’ combat is one of the game’s greatest virtues. Shirking the menu-based Command Synergy Battle system which fueled fisticuffs across XIII and XIII-2, the title employs an engaging mechanic that’s rooted in the fighting game tag-team management. Able to move freely (although slowly) across the battlefield, Lightning can cycle through three loadouts, called Schema, by using the trigger buttons. Each of Schema not only has four commands which are mapped to the face buttons on the DualShock 3, but also has its own gauge which depletes as players summon strikes. As such, combat is consistently engaging, with players shifting between Schemata, while simultaneously alternating between attacks and guard stances. 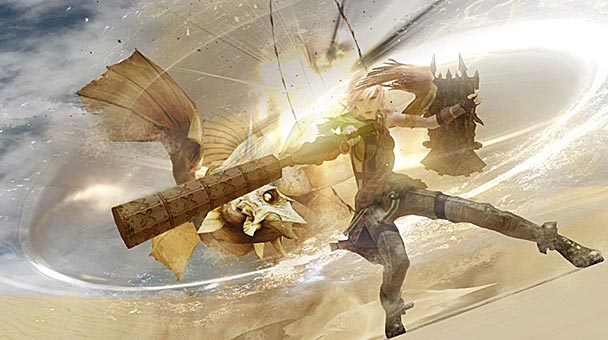 Although simple on the surface, the system holds a surprisingly amount of nuance. The ability to “stagger” enemies remains- compelling gamers to find a monster’s weakness. Once this flaw is uncovered- often with a barrage of magic attacks, the beast becomes vulnerable, with standard strikes growing exponentially in strength. More fascinating is the management of your Schemata, with configurations affected by your wardrobe, weapon, shield, abilities, and even carried items. Preparation can be quite involving, allowing players to build custom schema to safeguard against potent foes or magic-based ones designed to uncover or trigger a stagger.

Visually, Lightning Returns is woefully inconsistent. At times, Lightning’s costumes or the game’s environments can be stunning, pushing the hardware to its limits. Other times, locales or NPC’s look like holdovers from the PlayStation 2 era, with unsightly texture work or in some cases a noticeable low-poly count. While the Crystal Tools engine purportedly received a major overhaul to accommodate open world playability, the game occasionally creaks along. Sonically, Lightning Returns is a near-triumph; Masashi Hamauzu, Naoshi Mizuta, and Mitsuto Suzuki’s orchestral pieces and milieu-based themes are undeniably stirring. Slightly less successful is the voice-work, with a number of actors unambiguously tackling multiple roles. One pleasing perk is that the Japanese voice track can be downloaded free of charge. 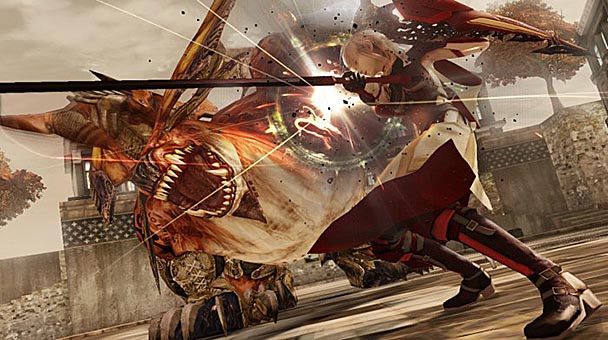 Forged from the inspirations of developers and the appeals of its audience, Lightning Returns is an oft-absorbing title, which provides a poignant coda on the Final Fantasy XIII trilogy. While not an unmitigated success, there’s both innovation and an engaging combat mechanic to be found. From absorbing boss battles, a handful of affecting moments, to a sense of exploration that’s long been absent in the Final Fantasy series, the game delivers many of the expected tenets of a role-playing game. Had the tonality been consistent, Lightning might have left an indelible mark of the genre.  Instead, she’ll have to settle for a place in line just behind Cecil Harvey and Cloud Strife.

Lightning Returns: Final Fantasy XIII was played on the PlayStation 3 with review code provided by the publisher.

Lightning Returns: Final Fantasy XIII Review
Not long ago, hardware and software developers were given near-absolute creative freedom. But over the years, the cost of game production escalated, thereby increasing the involvement of risk-avoidant publishers. The proliferation of game journalism has also reduced the autonomy given to creatives- as evidenced by Microsoft&rsquo;s backpedalling on the Xbox One&rsquo;s digital right policies and the pressure on BioWare to attune the conclusion of Mass Effect 3. Undoubtedly, one of the most interesting interchanges between auteurs and audience has been the dialog which shaped the trajectory of each subsequent entry in the Final Fantasy XIII series. The original game demonstrated&hellip;

Summary : Those disappointed by Final Fantasy XIII’s missteps will be happy to know that Lightning Returns carries little of its predecessor’s DNA. A wide-open game with involving combat, the title is recommended to players who can handle the Dead Rising-like structure.