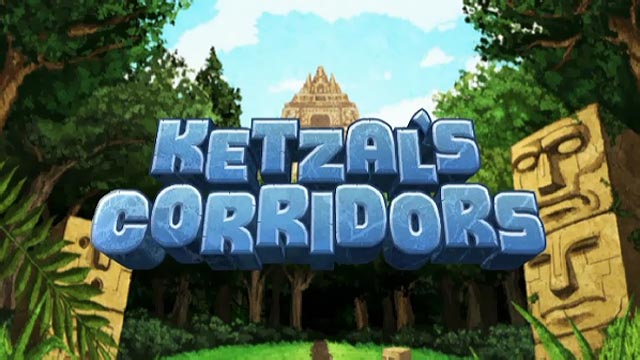 What is the concept? Sliding shapes through confined gaps isn’t a particularly innovative idea- the humble mechanic has served as the objective for both 2008’s Roogoo as well as 2011’s Hole in the Wall. Yet, recent 3DS release, Ketzal’s Corridors, adds enough nuance and intricacy to convert this unassuming undertaking into one of the Nintendo eShop’s more addictive amusements.

The title’s single-player campaign tasks gamers with maneuvering tetrominoes (called “Guardians”) through a succession of ninety-six levels, each gradually increasing in intensity. Beyond guiding pieces through each opening, gamers are also given two secondary objectives. Hearts scattered across each fissure serve as the game’s currency, permitting access into locked stages. Meanwhile, rotating your block to seamlessly fit through an opening is called a Trick, potentially earning players additional points. Unlike similarly themed titles, gamers have complete control of their piece, allowing the Tetris-like shape to be rotated along the both the vertical and horizontal axis. 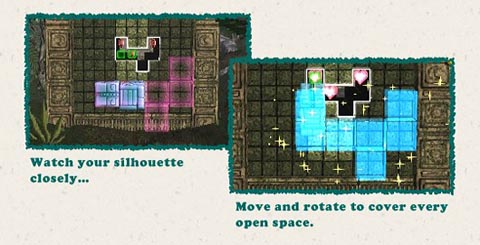 Initially, there is a vexing disconnect between the five buttons used to turn the tetromino and the player’s intentions, until gamers wrap their head around the title’s three-dimensional control scheme. During the game’s first dozen or so levels, minor adjustments to the position of your Guardian are the way to go, instead of completely reorienting the block. Yet, between the ability to replay Ketzal‘s tutorial levels, and a time-slowing mechanic which kicks in once failure is imminent – the title rarely seems insurmountable. Later levels do implore a bit of memorization, which seems to oppose the title’s aspirations as an action-minded puzzler.

What are the game’s strengths? Although players might not expect an entry in the geometric shape-shifting genre to have much of a storyline, Ketzal’s Corridors’ theme serves to unify the game’s distinctive visuals and soundtrack. Wrapping up the title with a Meso-American motif elevates the title above similar puzzle games, whether players are plotting their conquests on the game’s three foliage-enshrouded maps or hurtling through the ornate brick passageways of an Aztec temple.

A pleasing variety of objectives help keep Ketzal’s Corridors from growing stale through its three to four hour completion time. Endless levels defy player to keep their cool amidst an escalating pace, while unlocking additional Guardians allow gamers to revisit levels with an new, unwieldy tetromino- endowing the game with a bit of replay value. 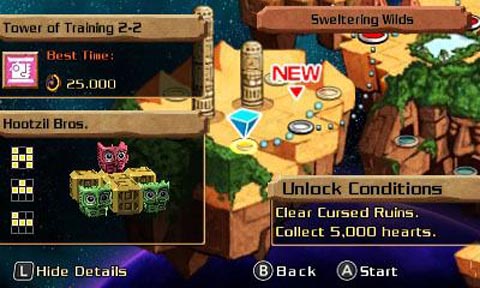 The title’s use of 3D is especially inspired, with each stage shuttling gamers through exteriors with varying exteriors, twisting hallways, and vestibules with shifting obstacles. Gamers who habitually keep the depth slider to a minimum will want to crank the switch here- Ketzal’s Corridors’ sense of perspective stands as a showcase for the portable.

What are the game’s weaknesses? Beyond the aforementioned difficulty level which belies an improvisational play style during its final stages, Ketzal’s competitive option is a bit of a disappointment. Forsaking both online and single-card styled download play, the title’s two player component forces players to share the game’s controls. Not only can splitting input between the directional pad and button seem cramped on the diminutive 3DS, but it also ruins the 3D effect as each player views the action from an angle. Given that most stages are a minute or two in length, a ‘pass the system’ styled- match would have been beneficial. 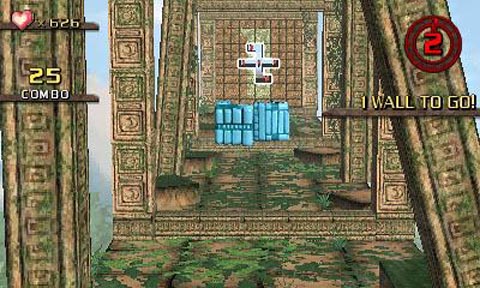 Is it worth the money? At $6.99 USD, Ketzal’s Corridors is yet another feather in the eShop’s cap, offering an entertaining, compelling diversion at an equitable price point. Although the game’s concept may seem simplistic, developer Keys Factory have injected enough variation and variety to make this title a near-requisite purchase for every 3DS owner.

Previous: New Releases for the Week of April 29th, 2012
Next: Prototype 2 Review